One European analyst says that despite the recent pullback, the tables might soon be turning in favor of gold.

The Everything Bubble: A Bubble Of Misguided Trust
By Ronald-Peter Stoeferle, Incrementum AG Liechtenstein
May 29 (King World News) – Although there is increasing evidence at the international level that confidence in the US-centric world order is crumbling, the apparent loss of confidence has so far not been reflected in either a weak US dollar or a significant rise in the price of gold (in USD). How do we explain that?

From our point of view, Donald Trump’s “all-in” economic policy contributes significantly to this. In the years following the financial crisis, global central banks flooded the economy with exorbitant monetary stimuli. Nearly 20 trillion USD of central bank money was created ex nihilo. Global stock markets were deliberately driven up in order to accelerate the so-called “wealth effect”. However, this did not seem to be having any effect in 2015, and stock markets began to stagger in the wake of fears of low growth…

When we recall the 2016 election year, various indicators at the time seemed to point towards an economic slowdown and approaching US recession. The gold price acknowledged the foreseeable end of economic expansion and the renewal of monetary and fiscal stimuli with its first significant rally since the bear market that began in 2011-2012. On the fateful election night in November 2016, however, the momentum was temporarily halted. Yields at the long end of the bond yield curve rose, allowing the Federal Reserve to implement long-awaited rate hikes in subsequent quarters without having to invert the yield curve. With the rise in interest rates, the gold rally was halted, at least for the time being.

Through massive tax relief and a change of mood on the part of many disillusioned voters, who often voted for Donald Trump because of economic dissatisfaction, the economic cycle could actually be extended once again. Not only the stock markets but also corporate bonds, luxury real estate, and works of art boomed. To describe this period, we have adopted Jesse Felder’s apt term “The Everything Bubble”. 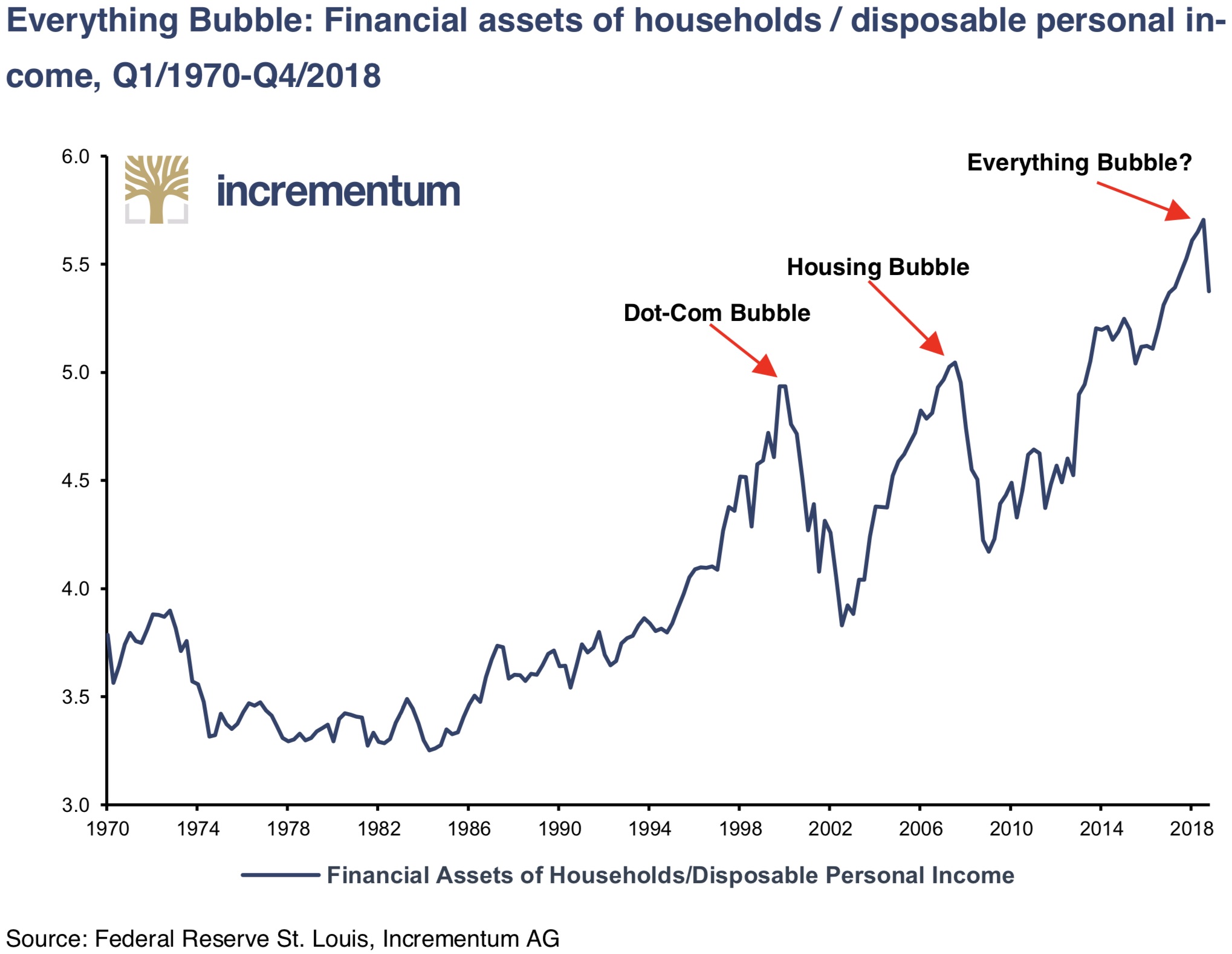 Alas, commodities remain the exception to the rule and still do not participate in the everything bubble. The extreme relative undervaluation of commodities compared to the stock market becomes evident in the next chart. It shows the development of the S&P GSCI and of the S&P 500, as well as their long-term upward trend line. To return to this trend line – which happens on average every 6 to 8 years – the S&P would have to fall by 44% and the GSCI to rise by 112%. This is a scenario that seems highly unlikely, if not impossible, at the moment. However, a glance at the following chart or at the history books puts this alleged impossibility into perspective. 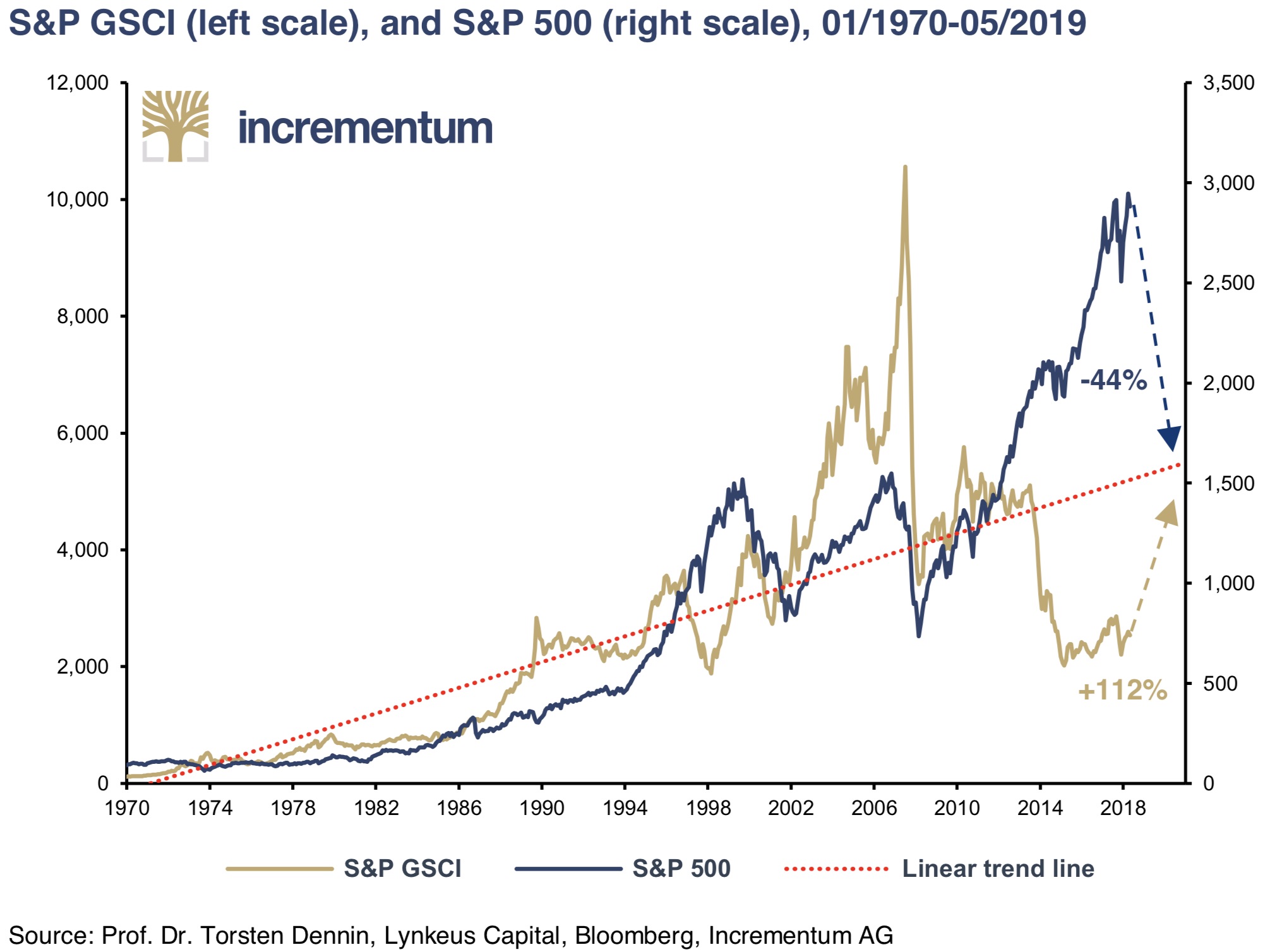 In Gold We Trust
Popular trust in the idea that monetary policies can sustain growth and employment and that central banks have inflation under control will be seriously tested in the next recession. The spread of the loss of trust to other pillars of the Western world, such as the media, the financial system, and the judiciary could have devastating consequences.

When it comes to trust in specific investments, our vote – at least for a portion of the portfolio – is clear. Trust looks to the future, forms itself in the present, and feeds itself from the past. As monetary asset, gold can look back on a successful five-thousand-year history in which it was able to maintain its purchasing power over long periods of time and never became worthless. Gold is the universal reserve asset to which central banks, investors, and private individuals from every corner of the world and of every religion and every class return again and again.

One thing should not go unsaid at this point: If our diagnosis is correct and trust is generally on the decline, this does not necessarily have to be negative. Although many of the developments we have noted should be regarded as worrying, we must not forget that trust levels in a society follow a cyclical pattern. Disappointment with familiar institutions may well allow the laying of the cornerstone for a more solid foundation in the future.

Gold looks to a future in which the natural value of this unique precious metal is once again fully appreciated. In our opinion, the currently high trust granted into the skills of central bankers and the supposed strength of the US economy are the main reasons for the somewhat weak development of the yellow metal. If the omnipotence of the central banks or the credit-driven record upswing are called into question by the markets, this will herald a fundamental change in global patterns of thinking and help gold to old honors and new heights.

***Also just released: A Tale Of Two Worlds – A Stunning Look At What Is Happening With Consumers CLICK HERE TO READ.