In the aftermath of the stunning Brexit vote and subsequent global chaos, is this epicenter of serious trouble about the send shockwaves across the world?

By Bill Fleckenstein President Of Fleckenstein Capital
June 27 (King World News) – Well, it looks like my traveling finally set a world record for volatility that will likely never be topped. I am of course referring to all the wild gyrations in virtually every tradeable market that took place on Friday — which continued for the most part today…

Bill Fleckenstein continues:  There are any number of topics I could try to discuss, but I would like to focus on what I think are the key points of the ramifications of the Brexit vote. The very first thing to keep in mind is that the “winner” of all of this is liable to be a massive amount of uncertainty (compounded by the U.S. election looming in five months), which inhibits businesses from making decisions and at the margin causes people to sell many types of assets.

Known Unknowns
This uncertainty is liable to be with us for some time, but for the moment this is a political problem, which means central banks can’t do anything. As the dominoes start to fall, however, they will swing into action because economic and financial problems are lurking beneath the surface. Thus, the Fed is going to look like the farce that it is sometime soon when it starts talking about NIRP or QE4 when it was supposed to be talking about raising rates. But I am getting ahead of myself. (For those keeping score at home the implied probability of a Fed rate hike is now zero all the way to December, and from there it jumps to a massive 7% and change. I wish it were possible to see what the handicapping of NIRP or QE4 is, but we don’t have an easy way to do that.)

One problem I think most people are going to have dealing with Brexit and the myriad things that can go wrong is that they have been so anesthetized by the activities of the central banks, they don’t really know how to activate their thinking cap. I think that is going to cause people to freeze until the financial markets actually cause them to panic.

We must remember that there has been no shortage of problems that should have led financial markets to think twice, but all problems have been ignored because of the aforementioned central bank policies, just as the Brexit vote was dismissed by nearly everyone (although not by me: (see the June 20 Rap). The consequences that are going to be unleashed and be front-page and business-page news in the not-too-distant future will not have been caused by Brexit. The vote is not the cause of anything, it is a catalyst for an unstable collection of variables that has existed for a long time.

As I have said so many times as the S&P was building this year-and-a-half-long top, large macro problems have a tendency to go from the impossible to the inevitable in the blink of an eye, which is exactly what we are experiencing. 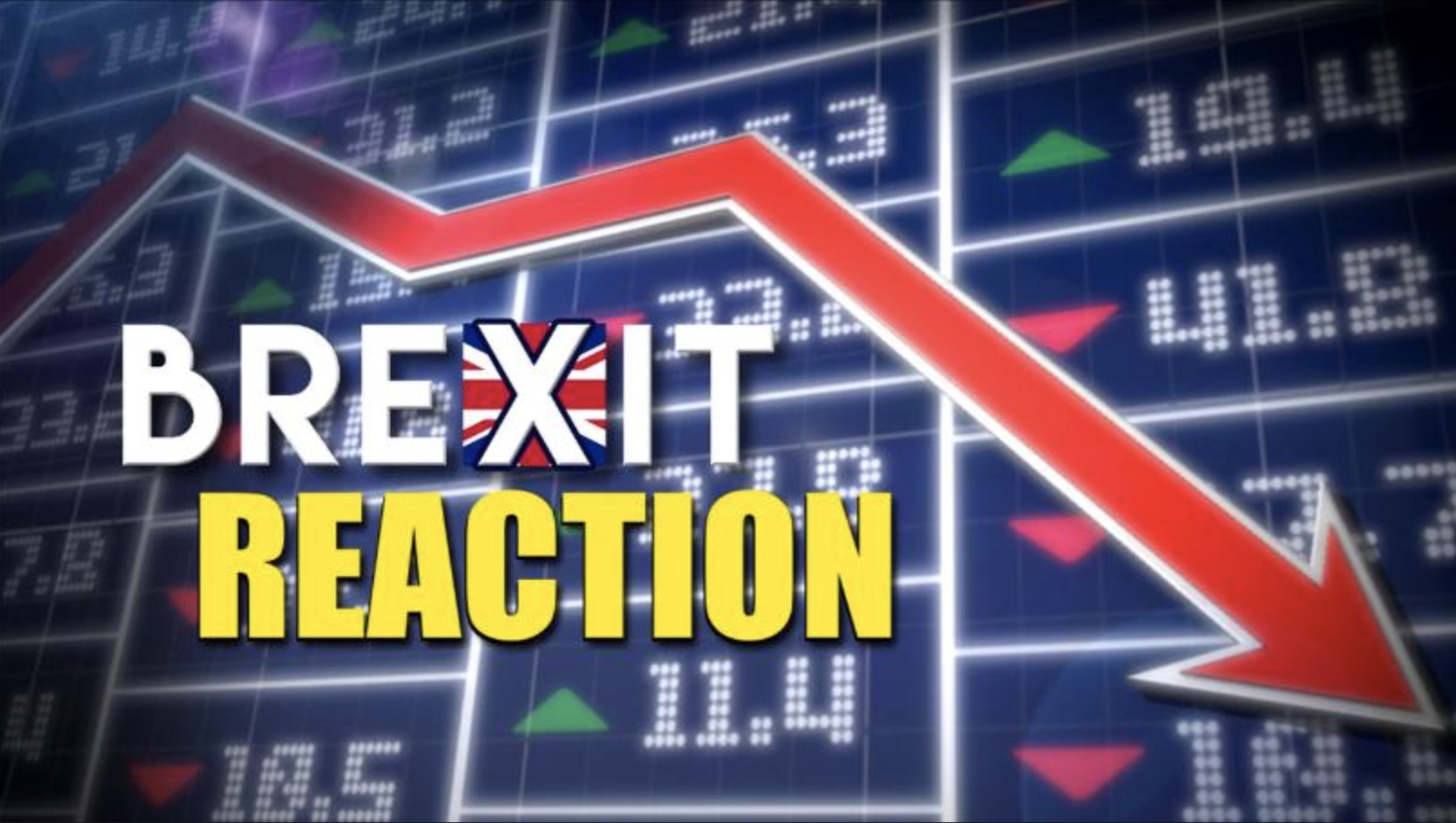 Ripple Effect Followed By the Crumple Effect
One of the epicenters of real trouble that could metastasize to other places is the financial sector. On this score European banks are far worse off than ours, as they did not do the same amount of capital raising as U.S. banks. That sector was one of the hardest hit groups on Friday and again today, and as we learned in 2008, when behemoth financial entities get into trouble they have a tremendous ability to transmit shockwaves all over the place.

In terms of market action, the U.S. stock market was pummeled for about 2%, plus or minus, in the first hour. The market tried to rally, failed, then tried again with a bit more success, and by day’s end the indices managed to close a bit off their lows, with the Nasdaq the weakest.

Away from stocks, green paper was a winner, as it was on Friday, although the yen was even stronger. The pound was hammered for another 4% today. I don’t think the Brits are too worried about that just yet. They probably would like a lower currency for the time being, but it does make a useful point, which is that the Brits have been easy from a monetary standpoint like everyone else and it is rather difficult to defend your currency when you are printing money. The bottom line is it would be virtually impossible for them to defend the pound at this moment in time, so it’s going to go wherever it wants to go. Having said that, wherever it stops it will probably be a colored paper that is better than a lot of the others, but that too is getting ahead of ourselves.

Fit For a PIIGS Breakfast
Fixed income was very strong and bonds worldwide for the most part continue to rally. I intend to keep my eye on the debt of Spain, Italy, Portugal, etc. because that stuff is liable to begin to widen sooner rather than later. We did see a bit of that on Friday, but not last night. The blow-off in government debt in America that I mused about a week or so ago looks like it may be underway and that will have very interesting ramifications down the road because if bonds decline in the face of central bank money-printing it will be a demonstration of their losing the printing press. That will have dramatic consequences and is something I’ve been waiting for for a long time, although it is also a step or two ahead of us.

The precious metals came to life on Friday and were fairly firm and higher today amidst a sea of liquidation (gold gained 1% while silver was flat). The miners acted OK but not spectacularly on Friday and were initially higher today before they sold off in a helter-skelter fashion, such that by day’s end some were pretty strong while others were pretty weak, with no pattern that I could see. I would expect that once the hot money gets shaken out of the group they will more closely track the price of the metals rather than stocks generically.

Question: Hi Fleck, I know you are not in the camp of very low treasury yields. I too was of that opinion. But we have already seen 1.5% on 10 Yr and with the uncertainty/chaos following Brexit, I would not be surprised with the blind flight to safety chasing treasuries. It might even get to 0.5% (Raoul Paul has been calling this for a while). Also, given mortgage rates are correlated, we might see a 2.x% on 30Yr and that might put another bid on the house prices (I think builders/sellers might capture it with higher prices than consumers with lower monthly payments). Does this sound reasonably likely scenario. I do have to say, you did single handedly force Brexit with your travels 🙂 Welcome back. Regards.

Answer from Fleck:  “I know you are not in the camp of very low treasury yields…” That isn’t true. I have said several times that I thought Treasuries could easily rally and even see a blow-off. I would NOT buy them. That is true. However, I doubt mortgages will get that low, but it is obviously possible.

Question: Dear Fleck, what action, if any, did you take this am? You had mentioned trading the news should something interesting happen. I couldn’t buy puts in the morning with huge gap down and VIX gonzo up. Also, never know when CB’s will start stepping in to save the day, or say they will! I left some old legacy puts CRUS, QQQ, SMH, SOCL alone (but irritated that a fair number went to put heaven when they expired June 17). Also have some SH calls, and short GGL. The only thing I did this week was short XLY (large size). But today sat on my hands (which I kinda had to giving lectures 9am to 1pm). Thanks

Answer from Fleck:  “Good question. I was set up to benefit by the vote to a large degree with a small short package and huge miners/gold position, but I had rejiggered some positions (to manage my risk better) such that if the Brits voted to remain and the markets rejoiced over that and then started to reverse I could capitalize on that. Thus, I didn’t do too much Friday. I added a small amount of short exposure, and added a little gold to replace some I had sold.”