Today the man who has become legendary for his predictions on QE and historic moves in currencies and metals says this is the investment of the century.

October 11 (King World News) – Egon von Greyerz:  The Founding Father and President Thomas Jefferson understood the extreme danger in handing over the issuance of the money to the bankers:

“The central bank is an institution of the most deadly hostility existing against the Principles and form of our Constitution. I am an Enemy to all banks discounting bills, or notes for anything but Coin.

If the American People allow private banks to control the issuance of their currency, first by inflation and then by deflation, the banks and corporations that will grow up around them will deprive the People of all their Property until their Children will wake up homeless on the continent their Fathers conquered.” — Thomas Jefferson (1743-1826)

If we look at just one example of “depriving the People of their Property” as Jefferson stated, the consequences for the ordinary man are devastating.

According to Federal Reserve Data, the richest 59 Americans have a wealth of $2 trillion which is the same as the wealth of poorest 50% or 165 million people. If we instead take the richest 1%, their wealth in Q2 2020 is $34 trillion or 17x the poorest 50%.

MALDISTRIBUTION OF WEALTH
This maldistribution of wealth leads to extreme poverty as Jefferson said and eventually to social unrest or revolution. This is what we are seeing the beginning of in the US currently.

Central banks and bankers robbing the poor and favouring the rich whilst destroying the economy and the currency have been the norm in history rather than the exception. I have quoted the Jefferson contemporary, Mayer Amsel Rothschild’s (1744-1812) words numerous times: “Permit me to issue and control the money of a nation and I care not who makes the laws.” Jefferson clearly didn’t appreciate bankers like Rothschild…

JOHN LAW & JEKYLL ISLAND
The world is now entering the end of yet another century long era when bankers and central bankers have managed to issue and control the money in an unlimited and immoral manner. But unscrupulous bankers have existed throughout history. John Law in France and his Mississippi Company during the early 1700s comes to mind. He obtained control of the money from King Louis XV, and quickly destroyed the currency and bankrupted a lot of people.

The plans for a similar coup as Law’s were performed by a number of bankers and the US Treasury Secretary on Jekyll Island in 1910. This is where the idea of the Fed was born as a private bank, owned and controlled by private bankers with the right to issue the nation’s currency.

THE FED AND THE BANKERS CAN ONLY WIN
From the banks point of view, the Fed has been the most beautiful construction and much more robust than Law’s bank since it is a century old. As a result of the Fed’s creation, private bankers have not only been in a position to create unlimited wealth for themselves and their friends like hedge funds and private equity companies. But they have also avoided taking any losses. In 2007-09 as the financial system was on the verge of collapse, governments had to absorb $10s of trillions of losses whilst the bankers had their normal major bonuses paid out that year too. The New York Fed was in charge of $29 trillion in bailouts. Congress never approved the bailout funds nor was it aware that they existed!

Morgan Stanley was one of the biggest recipients of the bailout, receiving $2 trillion. Interestingly, Morgan Stanley’s Hedge Fund Front Point LLC also received Fed support. This was the fund featured in the book and film “The Big Short” (a must read/see). So the Fed was forced to support a hedge fund which was shorting all the banks the Fed was forced to rescue. By the end of 2007 Morgan Stanley’s leverage was nearer 40%. No wonder they had to be saved by the Fed.

PLUS ÇA CHANGE … THE MORE IT CHANGES, THE MORE IT STAYS THE SAME
Interestingly, the New York Fed is in the same position today and is responsible for handing out funds from a number of lending facilities to rescue many US banks which are in trouble again. As always, the names of the banks receiving support and the amounts are kept confidential.

On top of the special facilities, the Fed started Repos in September 2019. In January 2020 these Repos had reached $6 trillion. By March the Repos were at $9 trillion. According to a report by the BIS, four large banks and hedge funds were the beneficiaries of the Repo debacle.

So who are the largest shareholders of the New York Fed? Surprise, surprise, they are the same people that had to be rescued in 2008, Morgan Stanley, Goldman Sachs, JP Morgan Chase, and Citigroup. Incidentally, these banks also have the biggest/riskiest derivative positions of all US banks.

What a wonderful position to be in. These major banks can take unlimited positions and risk, knowing that as major shareholders of the central bank, they can always rescue themselves at the expense of the government and the taxpayers. And this naturally at no cost to either their own banks and nor to the Fed that they control and own.

POWER CORRUPTS
What a marvellous construction, devised by the bankers over a century ago on Jekyll Island. They were the true descendants of Mayer Amschel Rothschild. But they did not just set up a structure so that they could control the money, they also succeeded in conning both congress and the government to hand over control of the whole caboodle to give them ultimate control and power.

Power corrupts and ultimate power even more so. And corruption eventually leads to the downfall of not just of the perpetrators but of the whole bogus edifice they have created. Unlimited money printing and credit creation will inevitably destroy the currency and the financial system as von Mises said:

“There is no means of avoiding the final collapse of a boom brought about by credit expansion….”

IT IS ALL ABOUT RISK
The expertise of myself and our company is to analyse and understand risk and come up with solutions to protect wealth. We clearly don’t possess the ability or means to save the world or the financial system. Instead our passion is to advise and assist the people who are interested in preserving or insuring their assets.

We are now approaching the end of century long chapter in the world economy which will make financial history. Like most eras of excessive debts and spending combined with false markets and fake money, this one will end badly too. But the difference this time is that there is not just one nation or continent which is involved but virtually every country in the world. Thus, we have reached the end of the road and the central bankers’ safety net will not be strong enough as it only consists of worthless fake money.

The only hope is Deus ex Machina or god from the machine. This was how hopeless situations were rescued in the ancient Greek plays. A figure (god) was lowered onto the stage to solve the insoluble problem. Sadly, I doubt that this will be the case this time.

(The picture below was made for an article I wrote back in 2011. 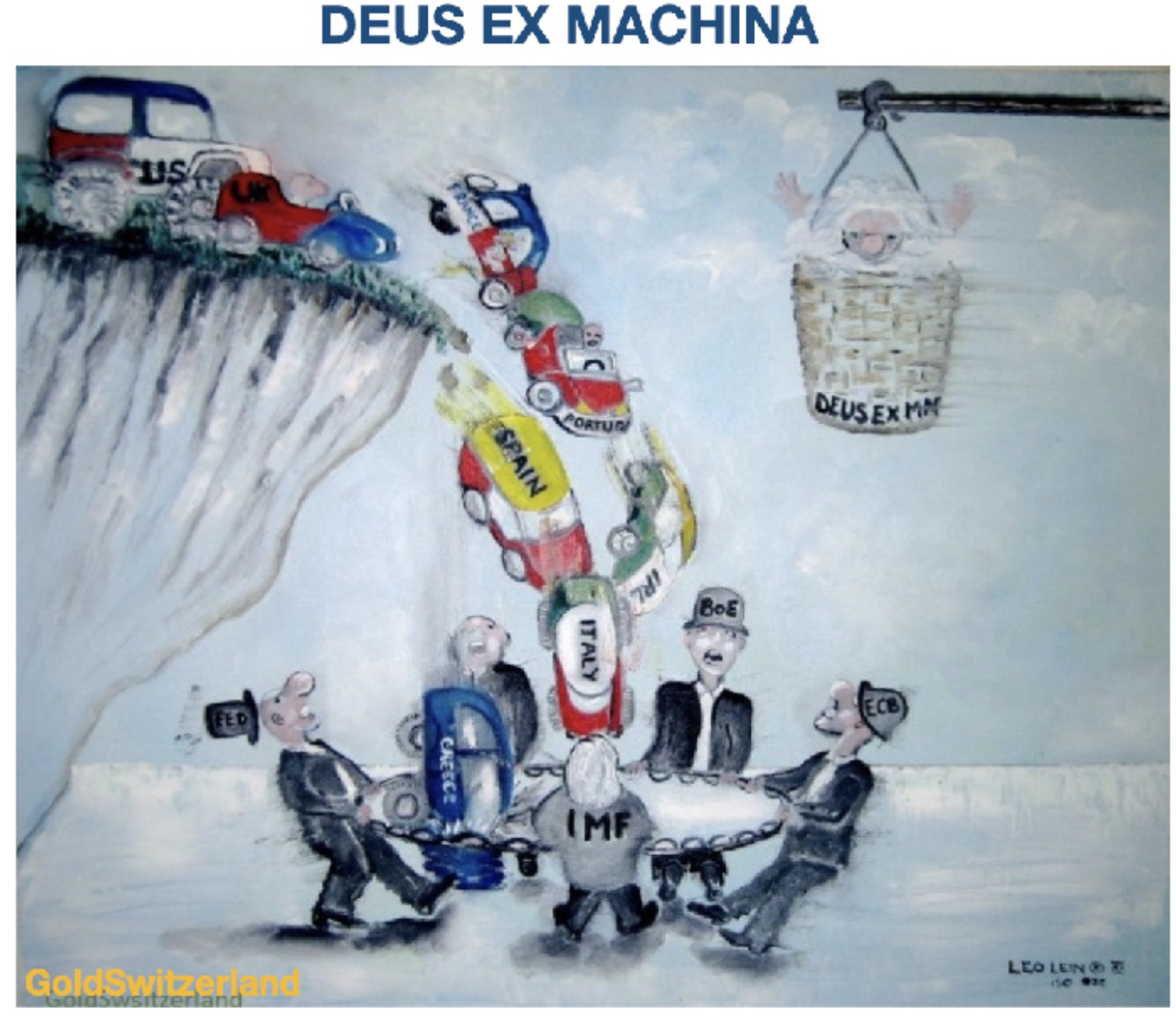 WEALTH PRESERVATION
I have for 18 years, in numerous articles on KWN and on our website – GoldSwitzerland.com – discussed the virtues of wealth preservation in the form of physical gold stored outside the banking system.

The acceleration of deficits and debts will further speed up money creation on a global scale, never seen before in history. This will lead to a total debasement of all currencies as they decline to their intrinsic value of ZERO. They are already down 97-99% in real terms  since 1971 which means measured in gold. The death of the dollar and most major currencies is likely to take place in the next 2-5 years as governments print unlimited amounts.

CROWN PRINCE OF METALS
Gold is the king of the metals and is the only money which has survived in history. But the crown prince of the precious metals is silver and in the next few years, silver is likely to have the most spectacular surge.

Silver was $50 in 1980 and again reached that level in 2011. At $25 today, silver is the most incredible bargain of any asset. Just as gold has been money for 5,000 years, silver has during many periods in history been the principal currency. For example the French word Argent means both silver and money.

SILVER – THE INVESTMENT OF THE CENTURY
Silver is both an industrial as well as precious metal. It is used in many electric and electronic products. Also, the demand for photo-voltaic or solar panels is expected to explode in the next 5-10 years.

Out of 850 million ounces ($21 billion) of annual mine production, (27,000 tonnes), 66% is for industrial use. With a major increase in production of solar panels, that percentage is likely to grow substantially. As jewellery absorbs 25% of mine production, there is only 10% left for making coins and bars. Scrap silver makes up some of the difference but there is normally an annual shortage of silver.

As demand for gold increases, silver demand will grow substantially as we have seen in 2020. Silver has always been seen as the poor man’s gold and as gold prices will become too expensive for many investors, they will instead buy silver.

The gold silver ratio reached almost 130 in April which was an extreme. See chart below. It is now down to 77 and likely to initially reach 30 where it was in 2011. Eventually we are likely to see the ratio back to the historical average of 15 or even 10 which the ratio of silver to gold in nature. 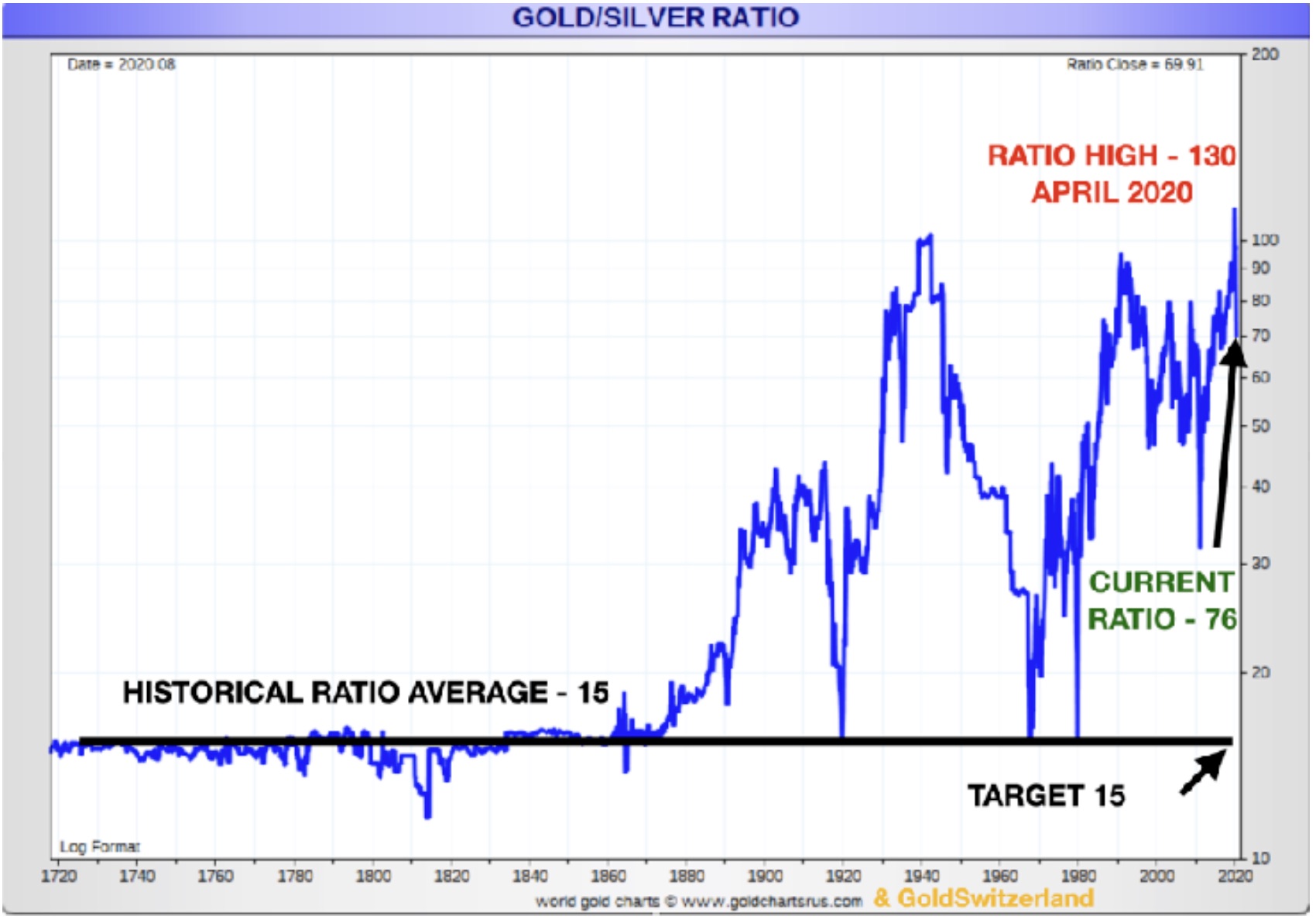 The consequence, the substantial increases in industrial and investment demand will be a major increase in silver prices. My longstanding target for gold reaching $10,000 in today’s money will probably be vastly exceeded. But if we assume $10,000 for gold and a gold silver ratio at 15, that would be a silver price of $666.

Interestingly it says in the bible that King Solomon received 666 talents of gold annually which would be worth $1.4 billion today.

But if we look at silver adjusted for real inflation based on ShadowStatistics, the $50 high in 1980 would equal to $950 today. So silver at between $600 and $1,000 is not an unrealistic target. 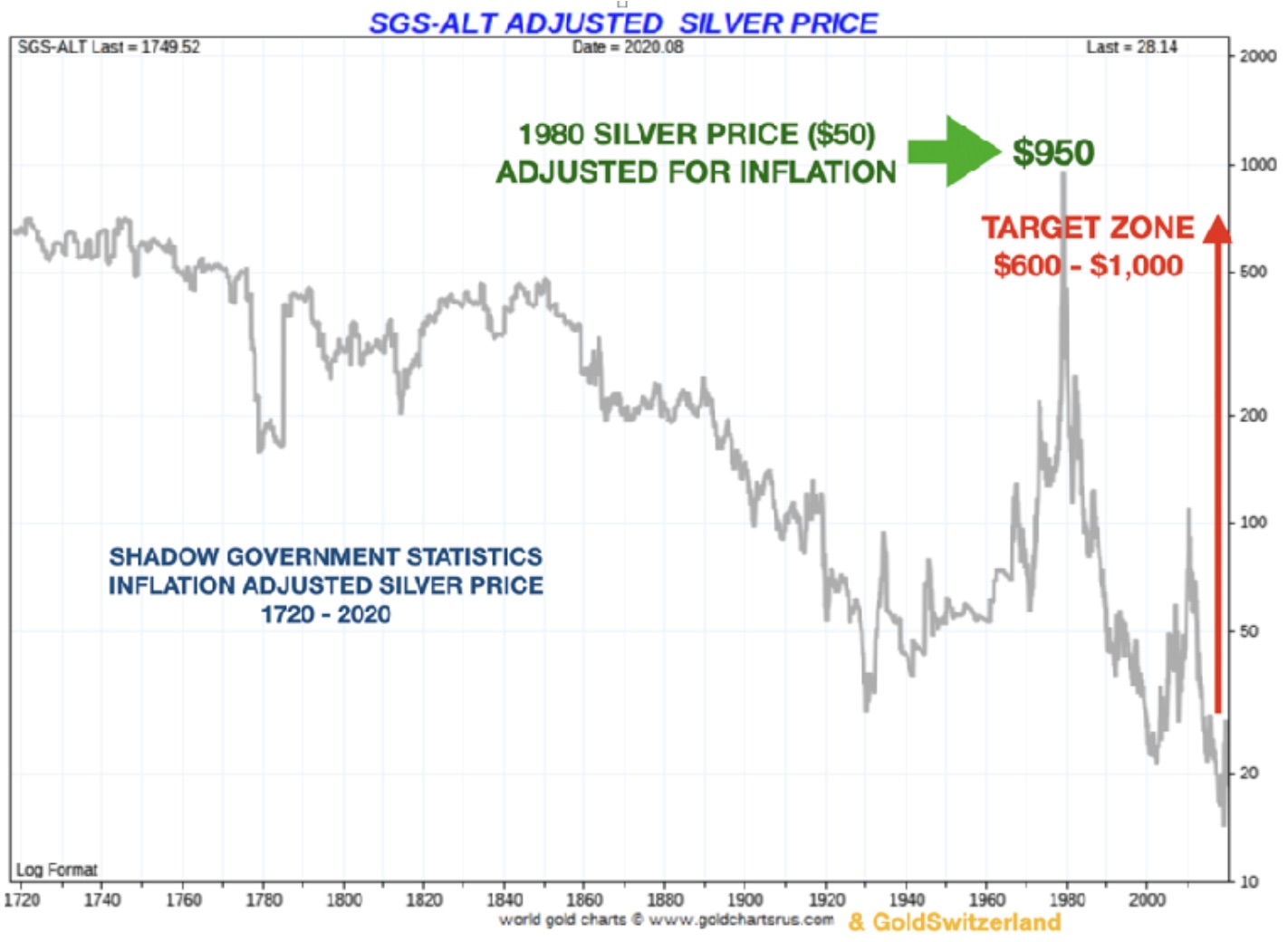 So silver has the potential to go up between 24x and 40x from today’s $25 price. A wealth protection asset with such a profit potential must be the investment of the century.

This might sound like sensational fantasy targets but that is far from the case. As I have shown, the inflation adjusted price is $950 so these levels are not unrealistic, especially when the supply and demand situation is taken into account.

But investors must understand that silver is extremely volatile so the corrections will be frightening. Silver is not for the faint hearted.

Most importantly, silver should be bought for wealth preservation purposes and not for speculation. Therefore it must be held in physical form outside a fragile banking system. 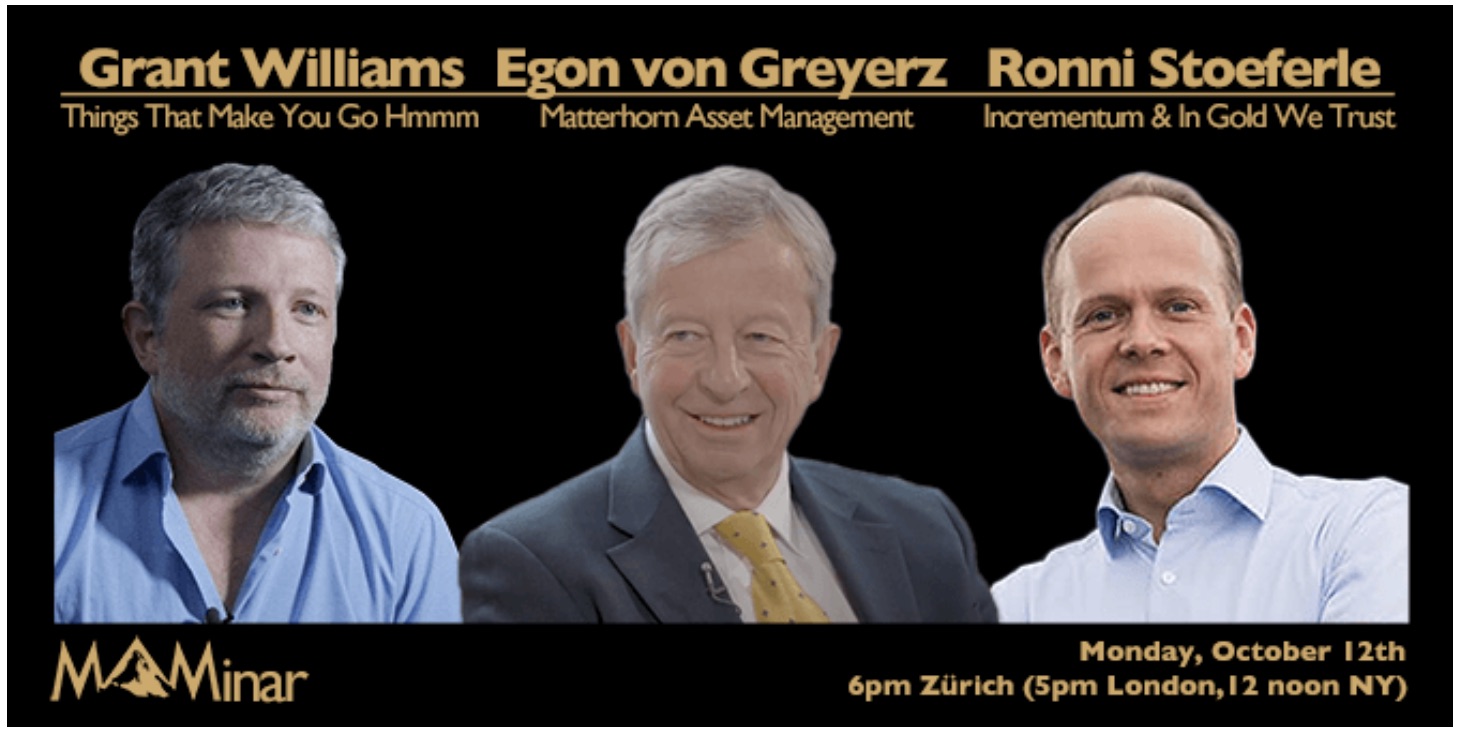