Today King World News is pleased to share a fantastic piece that warns a major danger signal is now flashing RED after one of the largest increases in history!  This piece also includes a key illustration that all KWN readers around the world must see.

March 1 (King World News) – We've discussed in previous reports over the past two years how traders in volatility products have tended to be the smart money, at least to the best of our limited knowledge in how they are using the products.

The three main exchange-traded funds based on the VIX "fear gauge" (VXX, UVXY and TVIX) have seen their shares outstanding ebb and flow over the past three years based on demand from traders. 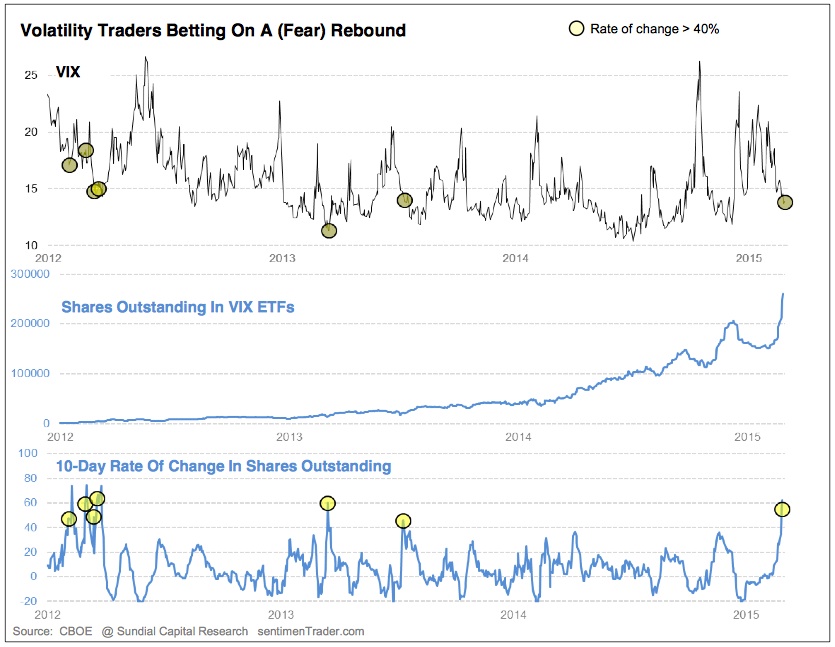 What we've typically seen is that when shares outstanding rise quickly, it has coincided with declining volatility and a VIX that was about to rise in the months(s) ahead.

This is notable now because shares outstanding have skyrocketed this week, adding to gains from last week. Over the past 10 sessions, shares outstanding in those funds have jumped more than 60%, one of the largest two-week increases in their short history.

This is the first time since mid-March 2013 that shares outstanding have jumped by more than 60% over two weeks. That happened to coincide with the low in the VIX; it jumped more than 50% over the next month.

The highlights on the chart show other times that shares outstanding in these ETFs jumped more than 40% over two weeks. The sample size is very small, but they did tend to precede spikes in the VIX over the next 1-3 months. Predictably, that also coincided with periods when the S&P 500 stalled out.

Based on the recent jump in the shares outstanding, this should be a negative for stocks. ***KWN  is about to release another important interview.

King World News note:  The bottom line is that this indicates trouble ahead for major stock markets.

***JUST RELEASED: Chris Powell gave one of the most terrifying audio interviews of 2015 CLICK HERE OR ON THE IMAGE BELOW.