There is absolutely no question that escalating fears over the coronavirus are moving major markets.

Virus fears dictating markets
February 1 (King World News) – Ole Hansen, Head of Commodity Strategy at Saxo Bank:  What a week, and what a month it has been for commodities with three major events all helping to create a roller coaster start to 2020. Geopolitical tensions between U.S. and Iran in early January was followed by the signing of the U.S. – China trade deal before, most importantly, the coronavirus outbreak in China created renewed concerns about the human and economic costs. 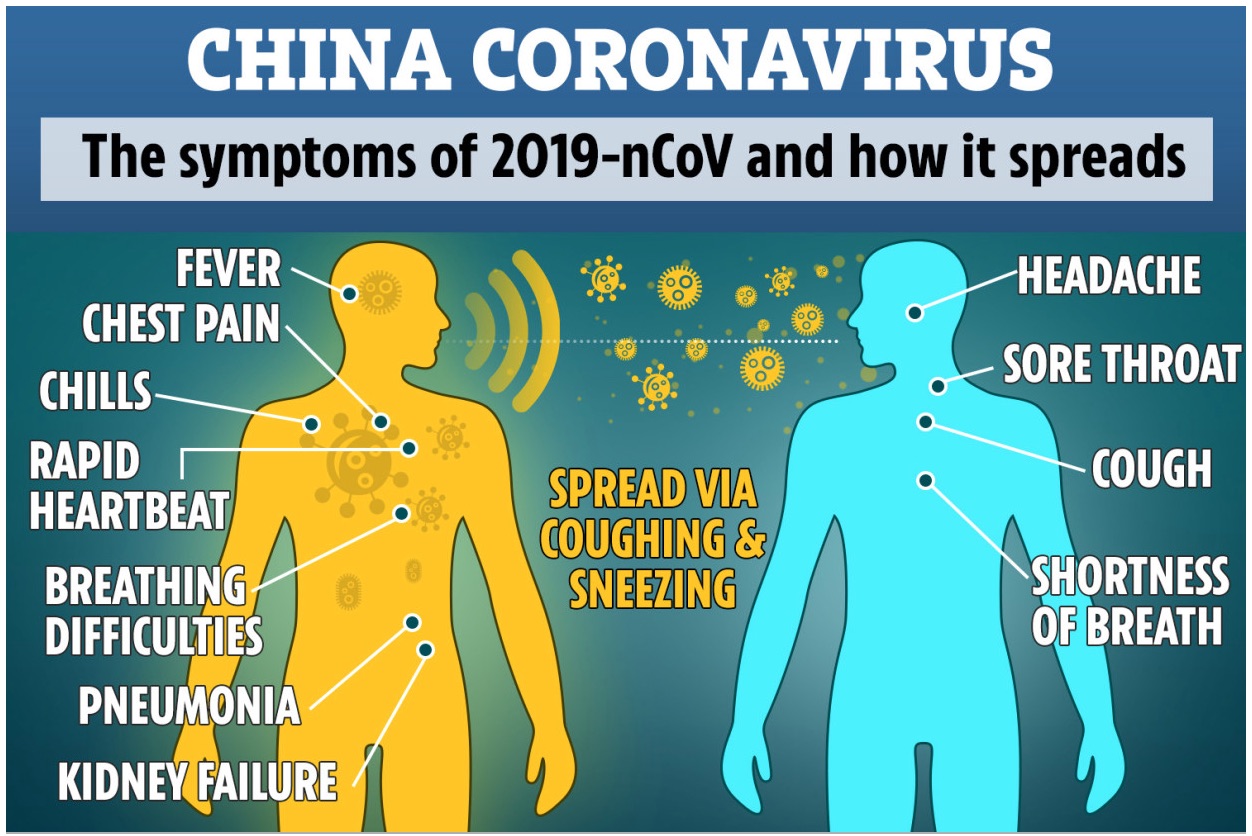 The WHO has declared the virus a public health emergency of international concern (PHEIC) and with this we may see further restrictions on trade and travel between China and the rest of world. Both of which are likely to increase global growth concerns and with that dampen the demand outlook for several key commodities from crude oil and soybeans to copper and iron ore.

Following a strong finish to 2019 the BBG Commodity Index, down 7%, is heading for its worst month since December 2018. Only 3 out of 22 components, led by sugar and gold are positive with coffee and heating oil leading driving the weakness.

Commodities
The performance table shows how the energy sector has been hardest hit this January. A mild winter across the Northern Hemisphere has kept natural gas under pressure for lack of demand. Crude oil meanwhile ended up more than reversing the strong gains seen during December following OPEC+ cuts and early January when tensions between Iran and the U.S. supported the price. China, the world’s biggest importer of crude oil, is likely to see a slowdown in demand for fuel as planes stay grounded and activity generally experiences a temporary slowdown.

Big Moves In Commodities This Week 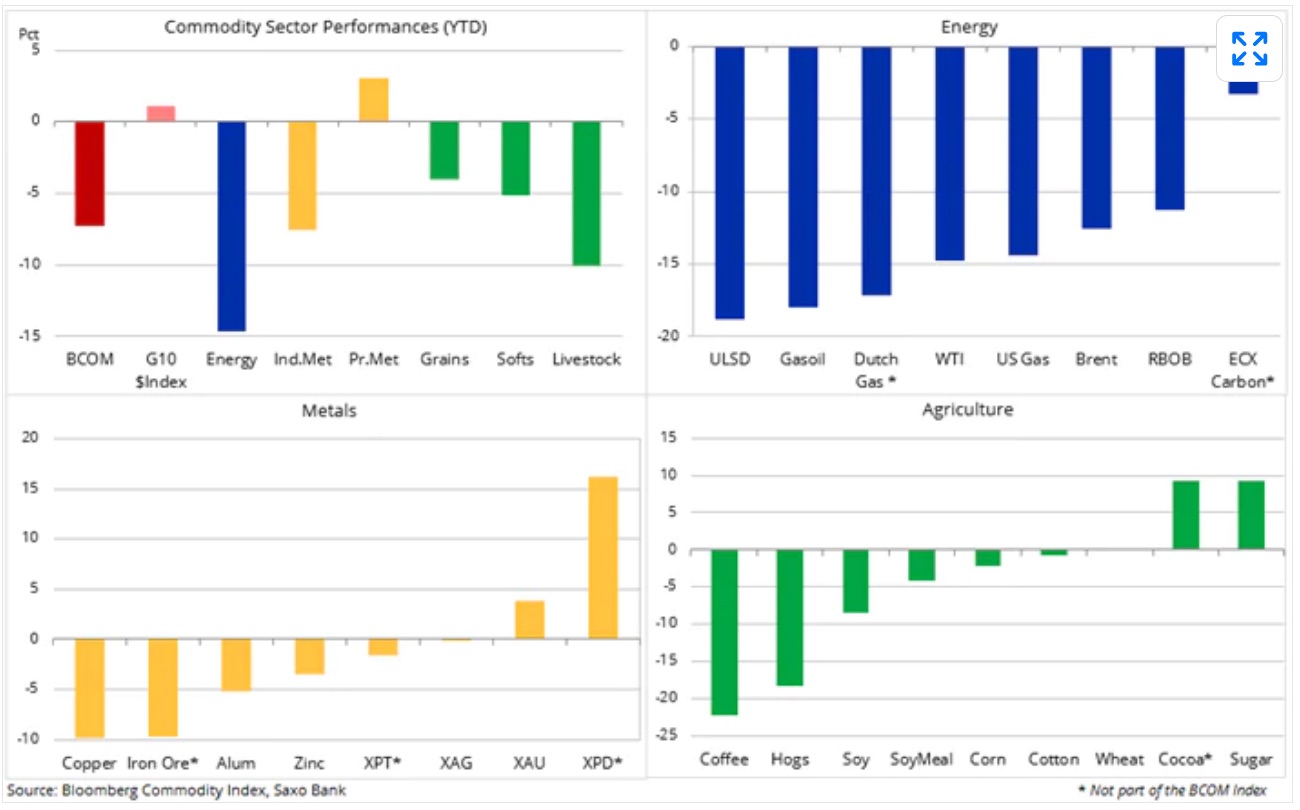 Three weeks of selling has taken Chicago soybean futures down by close to nine percent with excitement following the U.S. – China trade deal fading fast. A general horrible month for U.S. farm products has been driven by a diminishing belief that China will or can deliver the promised pickup in demand for U.S. agriculture products. The coronavirus-led disruptions of supply chains in China and the outlook for a bumper crop in Brazil have all conspired to send prices lower. These developments also highlights the need for U.S. crop prices to stay competitive in order to maintain attract demand from overseas buyers.

Industrial Metals
Industrial metals have also witnessed a sharp turnaround in sentiment with growth optimism at the beginning of the year taking a hit as the coronavirus impact started to be taken into account. Both copper and iron ore are very dependent of Chinese demand and were caught in the epicenter after China introduced travel bans and ordered companies to extend the Lunar New Year holiday. Adding to the gloomier outlook has been recent reports showing a contraction in U.S. and German manufacturing. But the biggest question that the market is currently asking is when the virus can/will be brought under control and for how long Chinese factories will be closed due to the current travel restrictions and extended holiday period.

These developments have led to copper once again becoming a favored short as macro funds seek to hedge against a global slowdown led by China. Overall, the net position held by hedge funds have been hovering close to neutral during the past few months. So, while crude oil’s sharp sell-off has been driven by long liquidation as the focus turned from supply disruptions to demand woes, copper has seen a lot of fresh short selling. A development that could support a relatively strong recovery – from short covering – once the virus focus fade.

Following 12 straight sessions of losses HG copper has returned to key support just below $2.50/lb, an area from where the market bounced on two occasions in 2017 and 2018.

Copper Pulls Back On China Fears 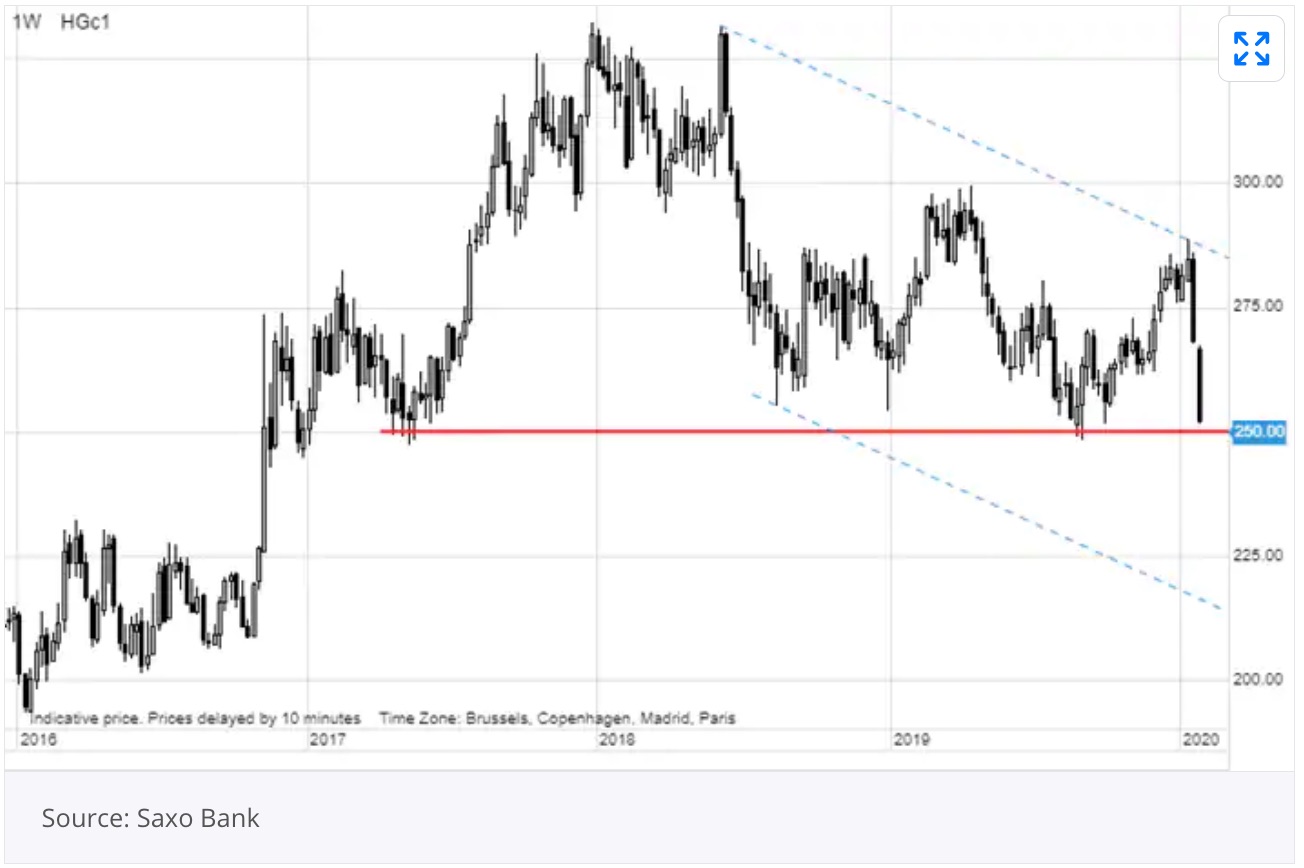 Gold: The Go-To Metal
Gold, the go-to metal in times of raised uncertainty, has surprisingly been struggling to live up to its safe-haven credentials these past couple of weeks. During this time supportive developments such as the drop in global bond yields and global stocks and increased expectations for future FOMC rate cuts have only managed to lift the price by less than 2%.

Despite the lack of price gains, demand for bullion-backed, exchange-traded funds have been strong during this time. Total holdings have reached 2571 tons (Source: Bloomberg) and now sits just 1.5 tons below the previous record from December 2012. The lack of response has been driven by a combination of investors already holding elevated long positions and concerns that Chinese buying may pause.

While we maintain a bullish outlook for different reasons in 2020, the market may once again be exposed to a small correction. Unless we see a further deterioration in virus-related news leading to further stock market weakness, the short term upside is likely to be limited. It raises the risk of a correction lower should the steep trend-line from mid-December give way.

Despite Volatility, Gold Headed Higher In 2020 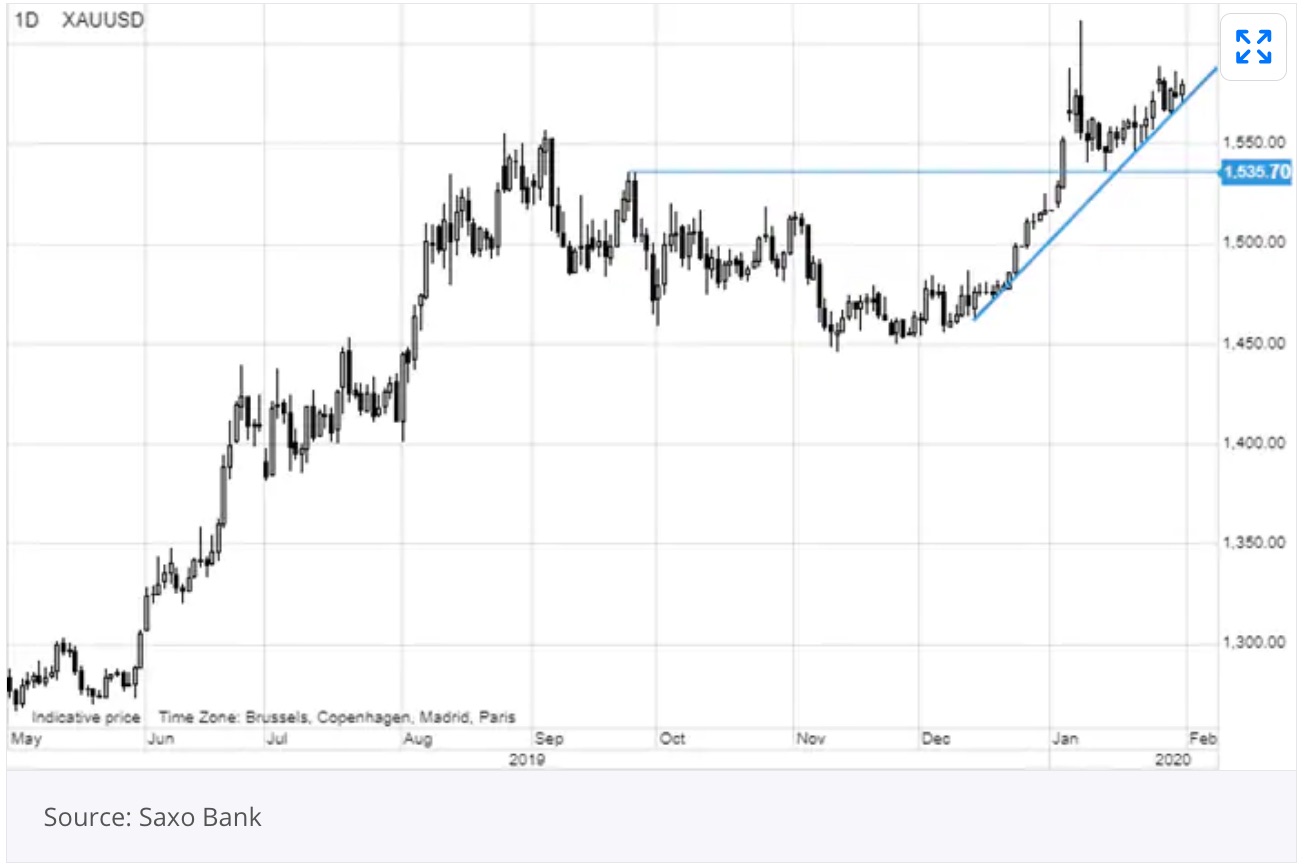 Crude Oil
Crude oil headed for its biggest monthly loss since May and following two weeks of non-stop selling Brent slumped to a near four-month low. In the process it wiped out all the gains that had been achieved following the December 6 decision by OPEC+ to cut production and the early January Middle East tensions spike. The selling was probably accelerated by hedge funds cutting bullish bets. Between early December and January 21, hedge funds had bought close to 100 million barrels of Brent crude oil. They were left completely unprepared by the sudden change in focus from potential disruptions in Libya and the Middle East to the coronavirus impact on demand for fuel.

Rising fuel stocks and the risk of slowing demand over the coming months are likely to prevent oil prices from recovering any time soon. In the U.S. gasoline stocks continue to make new highs while in Asia the margin for refining jet fuel has dropped to a near four-year low. S&P Global Platts Analytics is forecasting a drop of 200,000 b/d in oil demand for the next two to three months. If, however, the coronavirus is as bad as the SARS outbreak in 2003, they see oil demand falling by 700,000-800,000 b/d, reflecting more than half of the expected demand growth for 2020.

OPEC, increasingly frustrated by the latest slump, stands ready to support the price through extending and potentially making even deeper cuts. For now, the market will remain nervous about any further escalation of the virus threat in China and beyond. From a technical perspective, support is now located in the area around $56/b from where Brent bounced twice in August and October last year.

Support For Brent Crude Oil At $56 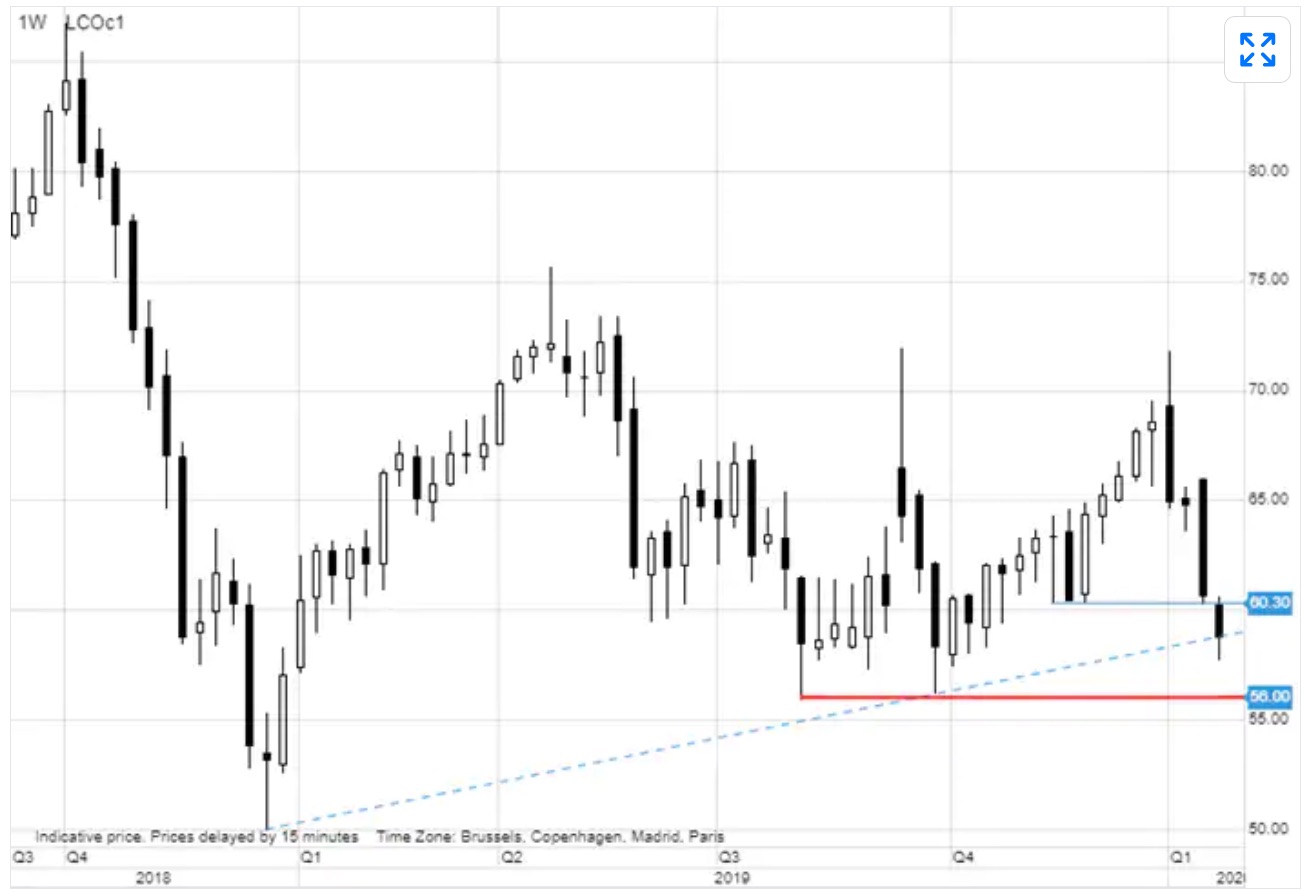 Summary:
The weekly commodity update takes a closer look at the main events that helped create a very volatile January. Not least the coronavirus outbreak which is once again changing the narrative back towards a lower growth outlook. With this in mind we are keeping a close eye on China-demand dependent commodities from crude oil and soybeans to iron ore and not least copper and gold.