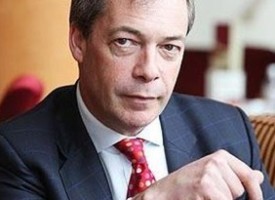 Nigel Farage: Member of the European Parliament (MEP) & Founding Member of the UK Independence Party (UKIP) – Nigel is MEP for the South East region and is the leader of the parliamentary party in the EU parliament. He has worked for British, French and American companies operating in the commodity markets, especially the London Metal Exchange (since 1982)….

John Mauldin: President of Millennium Wave Advisors & Millennium Wave Securities – Mauldin was previously Chief Executive Officer of the American Bureau of Economic Research, a publisher of investment newsletters and books. John Mauldin is a renowned financial expert, a New York Times best-selling author.  Mauldin is a frequent contributor to publications including The Financial Times and The Daily Reckoning, as well as a regular guest on CNBC, Yahoo Tech

Michael Pento: President of Pento Portfolio Strategies – Michael is a well-established specialist in the “Austrian School” of economics. A regular on CNBC, Bloomberg, Fox Business, and other national media outlets and his market analysis can be read in most major financial publications. Prior to starting Pento Portfolio Strategies he served as a senior economist and VP of the managed products division of another well known financial firm. Michael has

Art Cashin: Director of Floor Operations for UBS Financial Services & CNBC Market Commentator – UBS has over $650 billion under management. Art has over 50 years of Wall Street experience, which gives him the ability to offer valuable insights to investors and traders. When he started in the industry, the Dow Jones Industrial Average was actually in the 700-800 range. He shares his analysis and gives the pulse of the market

Egon von Greyerz (EvG): Founder and Managing Partner of Matterhorn Asset Management AG & GoldSwitzerland – EvG forecasted the current economic problems over 10 years ago. In 2002 (gold $300/ oz.) MAM recommended to its investors to put 50% of their investment assets into physical gold stored outside the banking system. EvG specialises in M&A and Asset allocation consultancy for private family funds. MAM (based in Zurich, Switzerland) specialises in

FOR DIRECTIONS ON HOW TO PLAY OR DOWNLOAD AUDIOS: CLICK HERE Dr. Philippa “Pippa” Malmgren: President & Founder of DRPM Group – Dr. Malmgren was former Special Assistant to the President of the United States for Economic Policy and former member of the U.S. President’s Working Group on Financial Markets. While in the White House, Dr. Philippa “Pippa” Malmgren served as financial market advisor in the White House and functioned as the liaison