BUCKLE UP: This Monster Is Going To Be Highly Disruptive For Global Markets

Buckle up because this monster is going to be highly disruptive for global markets.

Way, Way, Way Behind The Curve
May 31 (King World News) – Ronnie Stoeferle:  The definition of “being behind the curve”. 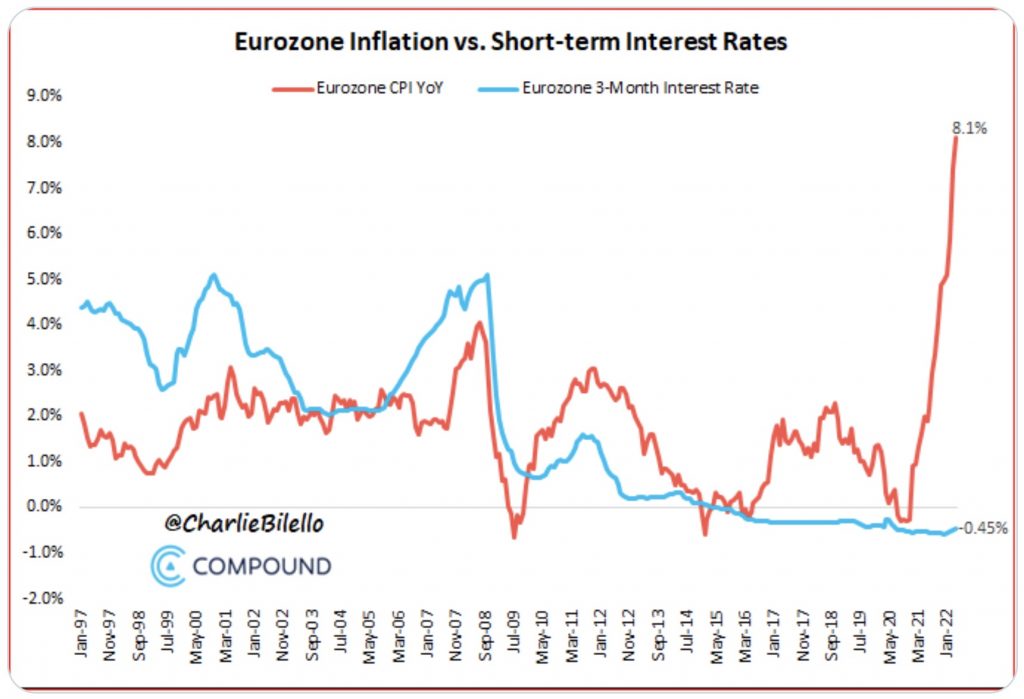 A Monster
Peter Boockvar:  While Atlanta Fed president Bostic last week focused more on the rate he wants to get to, that being 2%ish, before playing it by ear from there, Fed governor Waller over the weekend is more focused on doing whatever it takes to get inflation back to 2%. He said yesterday in Germany, “I am not taking 50 bp hikes off the table until I see inflation coming down closer to our 2% target. And, by the end of this year, I support having the policy rate at a level above neutral so that it is reducing demand for products and labor, bringing it more in line with supply and thus helping rein in inflation.”

This of course is now going to be joined by QT starting this week. Now QE, the US version, has become a monster in terms of trying to coral it. It is a monster created by Helicopter Ben Bernanke and has morphed into much more than they ever imagined. It initially was meant to bail out housing at the depths of the financial panic in late 2008, early 2009 via the purchases of MBS. It then became a tool to lower long term interest rates on the hopes that the Fed’s presence would be enough to do so but manipulating the longer end sometimes worked and sometimes didn’t. It also was meant to ‘ease financial conditions’ and raise stock prices, something Bernanke liked to highlight and was very successful at doing. As for monetizing US debt and helping Treasury manage the financing the budget deficit, Bernanke said ‘that’s not what they are doing’ I paraphrase back in February 2011 in his hearing in front of the House Budget Committee.

Lies, Lies, Lies
This is what Bernanke said to Congressman Paul Ryan at that hearing in a question about monetizing US debt, it:

“would involve a permanent increase in the money supply to pay the government’s bills through money creation. What we’re doing here is a temporary measure which will be reversed, so that at the end of this process, the money supply will be normalized, the Fed’s balance sheet will be normalized and there will be no permanent increase, either in money outstanding or in the Fed’s balance sheet.”

Well, that belief didn’t come true. The US economy has grown in size by 69% since Q2 2007 (thus before everything hit the fan) and the Fed’s balance sheet has gone from about $890b to $8.9 Trillion…

QT Will Be Highly Disruptive
My bottom line here is that QT itself will be highly disruptive, no matter that we’ve known the exact details for a while on how they plan to do it. The end of QE1, QE2, QE3 and all the other iterations were all well telegraphed and there were still many market bumps in the path to ‘normalization’ which of course never happened. The fragility we fear due to the belief that markets can’t handle much higher interest rates and QT was created by the Fed’s constant coddling of financial markets coincident with the encouragement of massive debt accumulation. The financial stability they have so desired instead has resulted in major instability that ebbs and flows with whether the Fed is tightening or easing.

As I said a few weeks ago, the difference this time is inflation, and which will hand cuff their ability to save us from the difficulties their tightening will incur and have already begun to do so. And finally on this, we have a US economy that is feared to be unable to walk on its own two feet without the crutches of negative real interest rates or at most zero. That’s a sad state of affairs. I’m more confident that the US economy has an incredible ability to regenerate itself and thus needs a more humble Fed when it comes to easing.

Here is the youtube video of that Paul Ryan, Ben Bernanke back and forth in February 2011. Start it at 23:20, https://www.youtube.com/watch?v=T37Xo7eZZmo 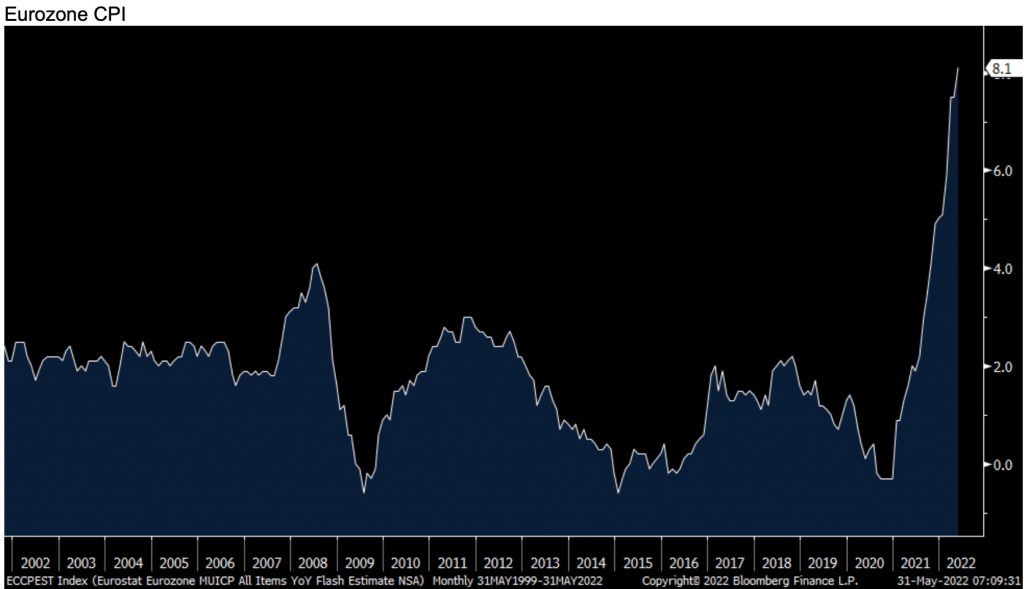 Stripping out food and energy saw a 3.8% gain, two tenths more than expected and vs 3.5% in April. 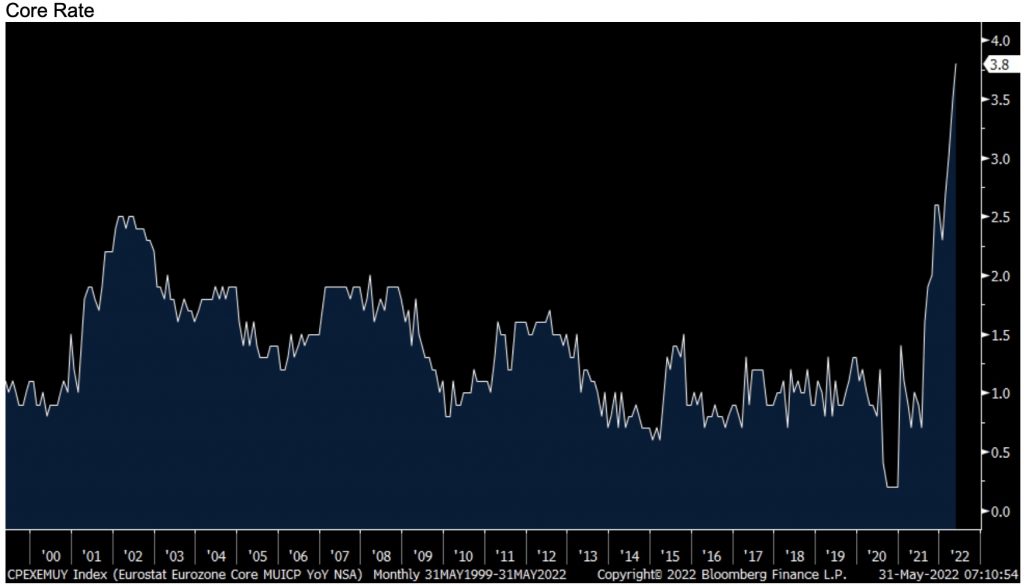 QE will finally end this month and rates might actually get back to zero by September. That is the ECB’s idea of dealing with inflation but what we’ve learned from them is that ‘price stability’ is no longer their sole mandate, it is far more secondary. The number one remit is financing European government budget deficits and debts.

In response, European bond yields are rising and the 5 yr 5 yr euro inflation swap is up by 4 bps to 2.16% but that is well off the high of 2.49% back in early May. The German 10 yr inflation breakeven is up by 6 bps to 2.30%. The euro though is weaker after rising in 5 of the past 6 days. US yields are rising in sympathy but also getting a lift from the Waller comments.

Commodities Rallying On China Reopening
Most commodity prices are rallying on the reopening process now taking place in China and that we can only hope continues. Iron ore, copper, crude oil (also boosted by the EU news on banning the imports of Russian oil) for example are all rising in price.

Somewhat dated and likely marking peak rate of change, the S&P CoreLogic national home price index in March saw a rise of 20.6% y/o/y, the quickest in this cycle and that is on top of a 13.5% y/o/y rise in March 2021. Again, great for existing homeowners that can tap that equity if needed but this is remains quite the challenge for the first time buyer. 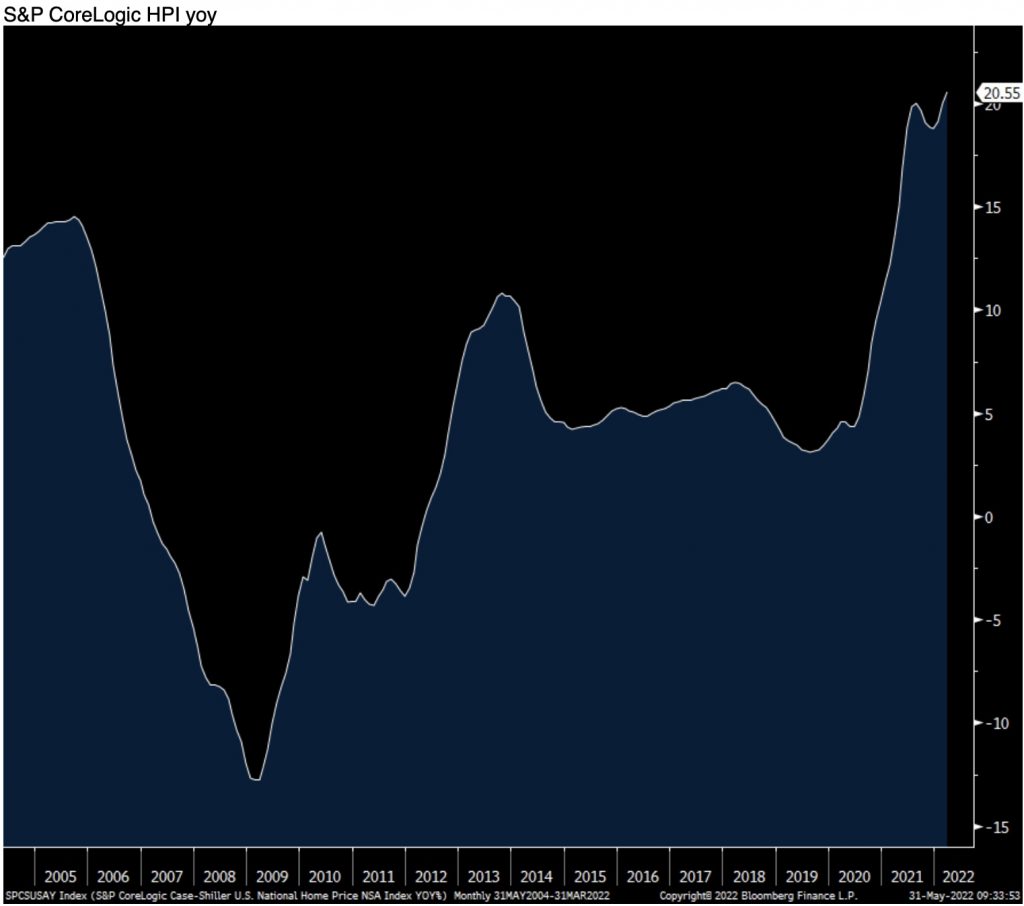 Bottom Line
Bottom line, we know the pace of sales transactions, because of these price increases on top of the spike in mortgage rates (stating the obvious), is slowing but it’s uncertain as to what extent home price gains will slow or maybe in some markets even outright decline which should surprise no one if that were to occur notwithstanding the tight existing home inventory situation but with a growing amount of new homes for sale. I’ll argue that it would be a really good thing if prices stopped going up or even fell in order to better calibrate prices with what people can afford within the realm of their income.

Consumers Concerned
The May Conference Board consumer confidence index was 106.4, just above the estimate of 103.6 but still down from 108.6 in April. 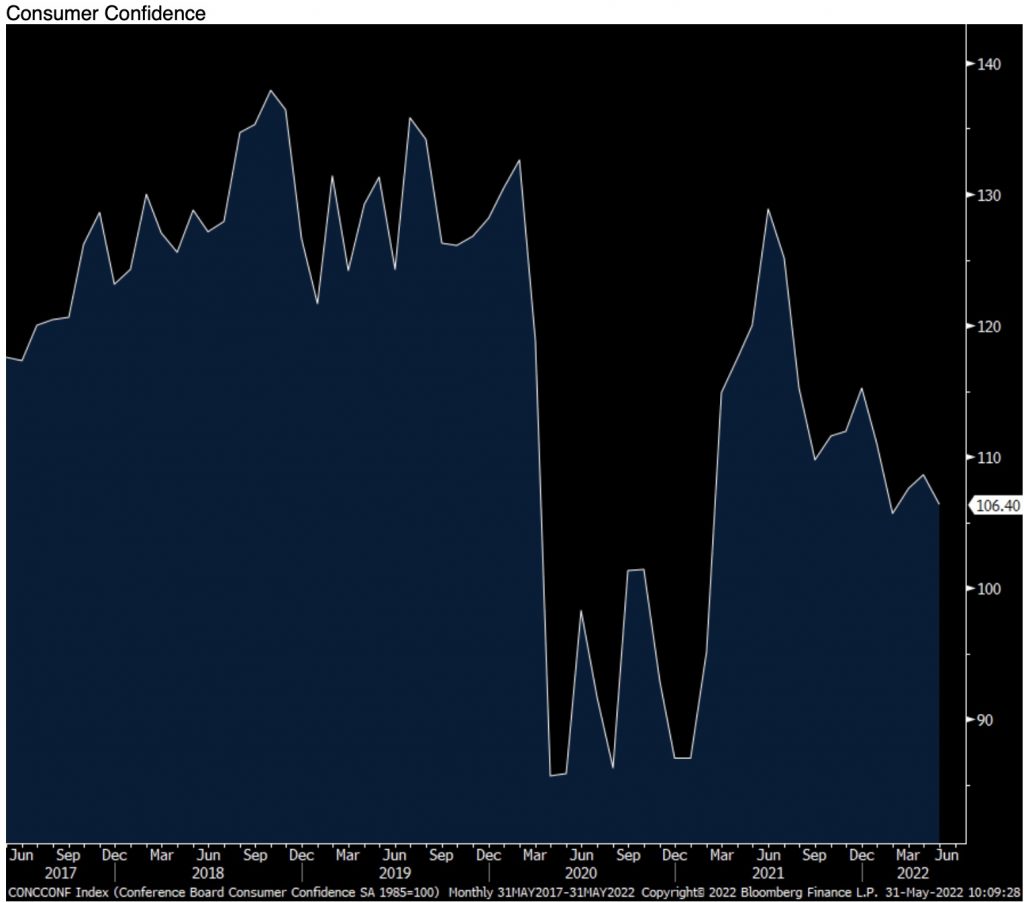 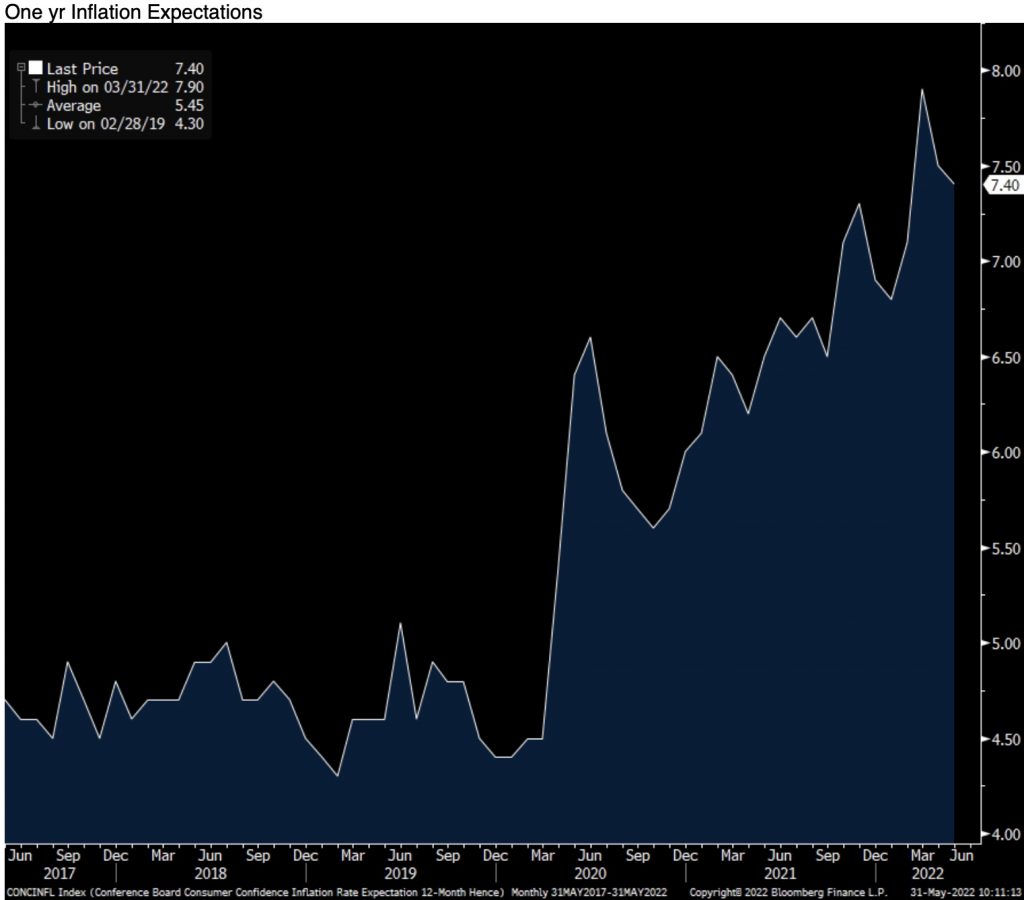 The answers to the labor market questions did soften. Those that said jobs were Plentiful fell 3 pts to the lowest since May 2021. 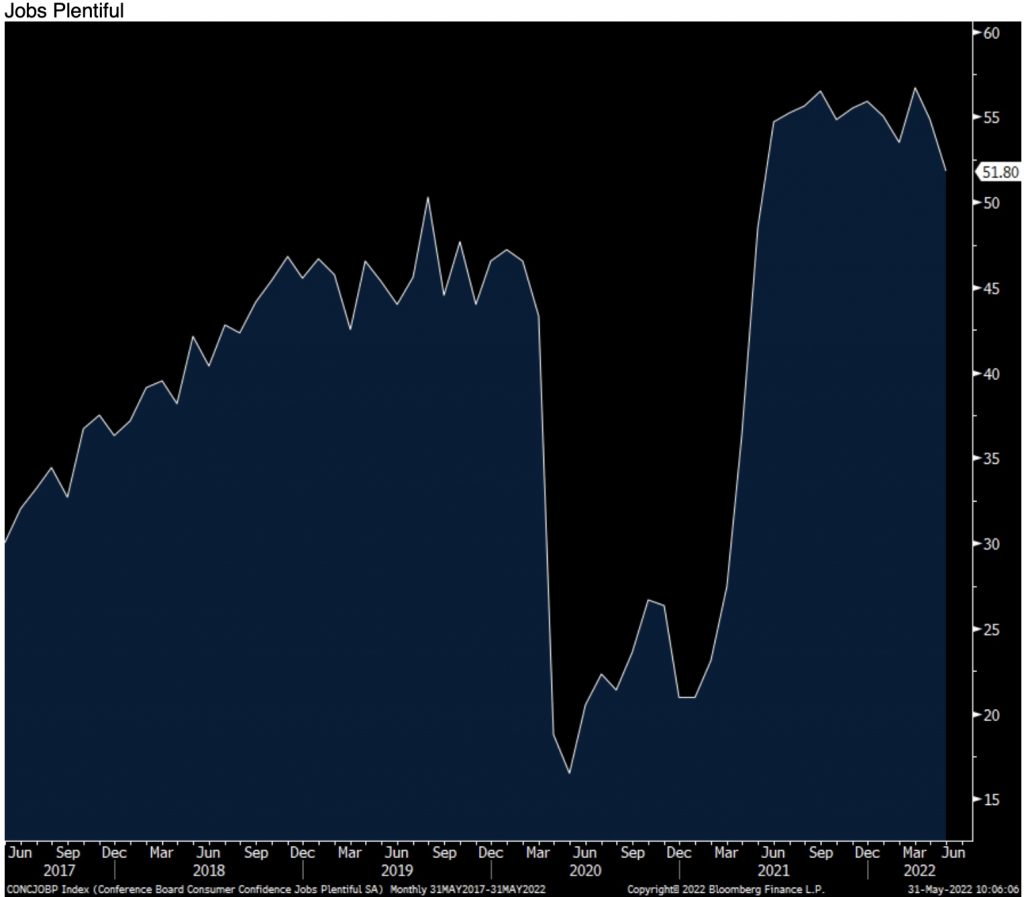 Big Slowdown In Hiring
Those that said jobs were Hard to Get was up 2.4 pts to an 8 month high. This would all square with the anecdotes we’ve heard from a variety of big companies that talked about a slowdown in hiring intentions. Employment expectations though were little changed and income expectations for an increase rose to the highest since July 2021.

Consumer Buying
Spending intentions on major items weakened again. Those that plan on buying a home fell .9 pts m/o/m and gives back the 1 pt rise last month. Plans to buy a car/truck and a major appliance also saw m/o/m declines.

Not surprisingly the bottom line from the Conference Board said:

“inflation remains top of mind for consumers, with their inflation expectations in May virtually unchanged from April’s elevated level. Looking ahead, expect surging prices and additional interest rate hikes to pose continued downside risks to consumer spending this year.”

In the debate over recession, no recession/soft landing, hard landing, it all comes down to the behavior of the US consumer. Lower income households will certainly be most impacted by the direction of real wages while upper ones will most likely be influenced by the direction of the stock market from here. Those in the middle will get impacted by both. And of course throw in that we’ve seen peak labor market and how that unfolds from here.

Finally, as we approach the European close, bond yields there are breaking out to the upside on the heels of the inflation stats this week and how badly the ECB has bungled policy. This in turn is lifting US yields. 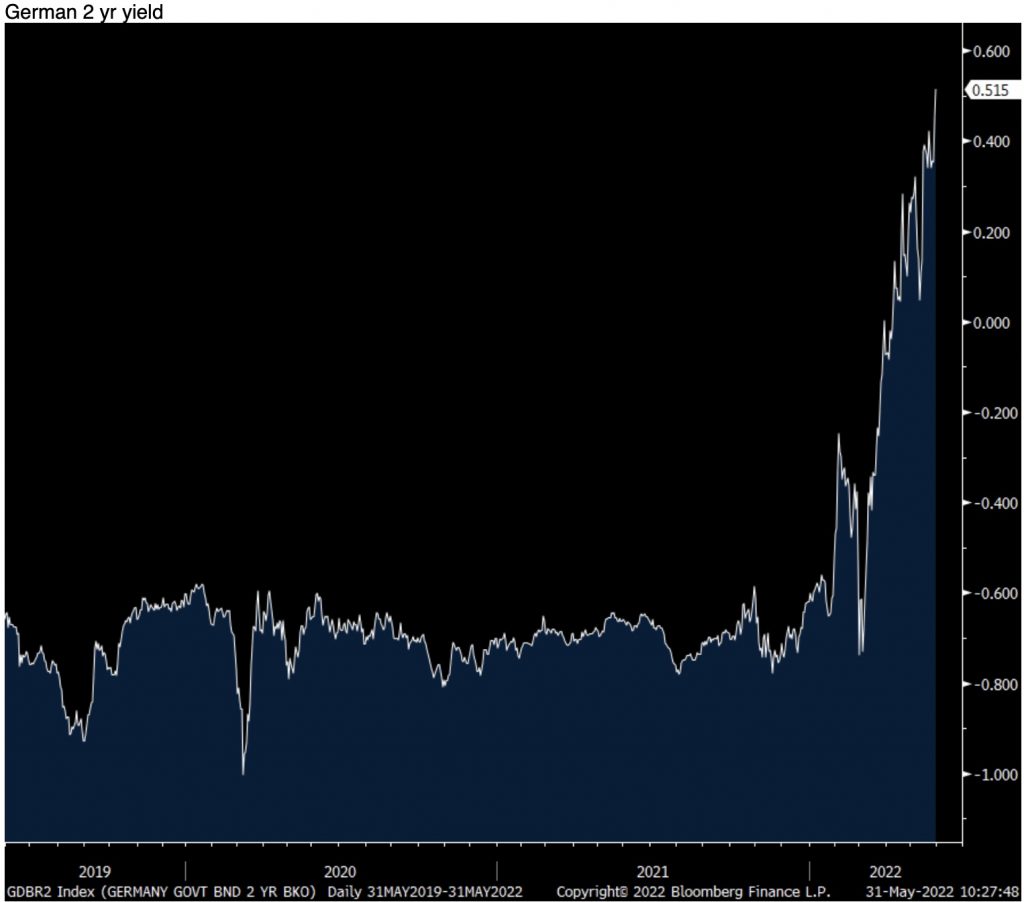 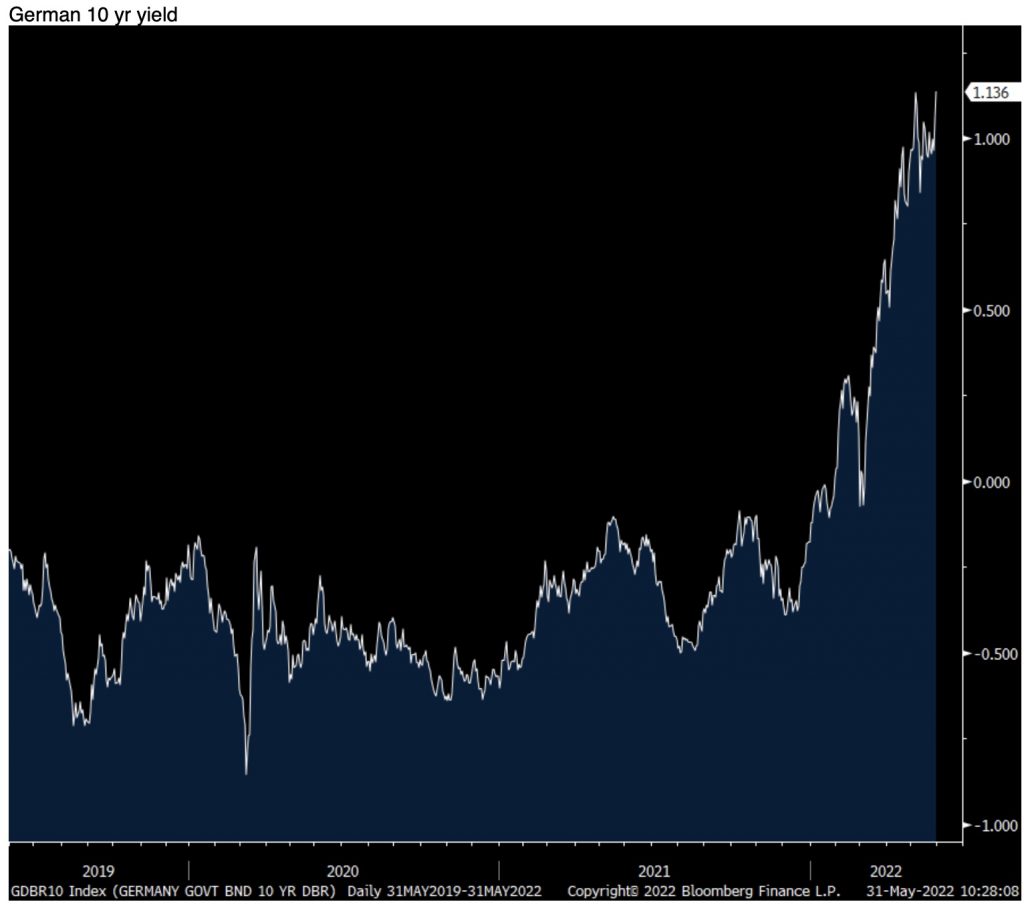 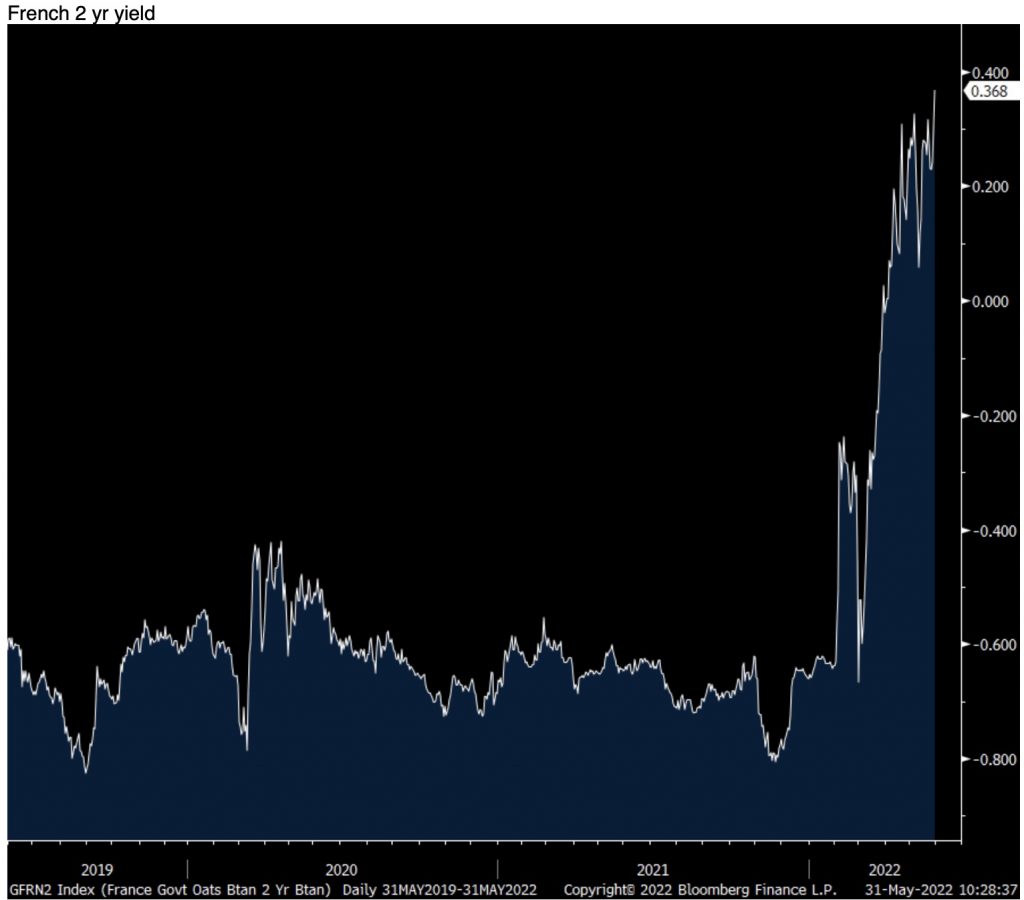 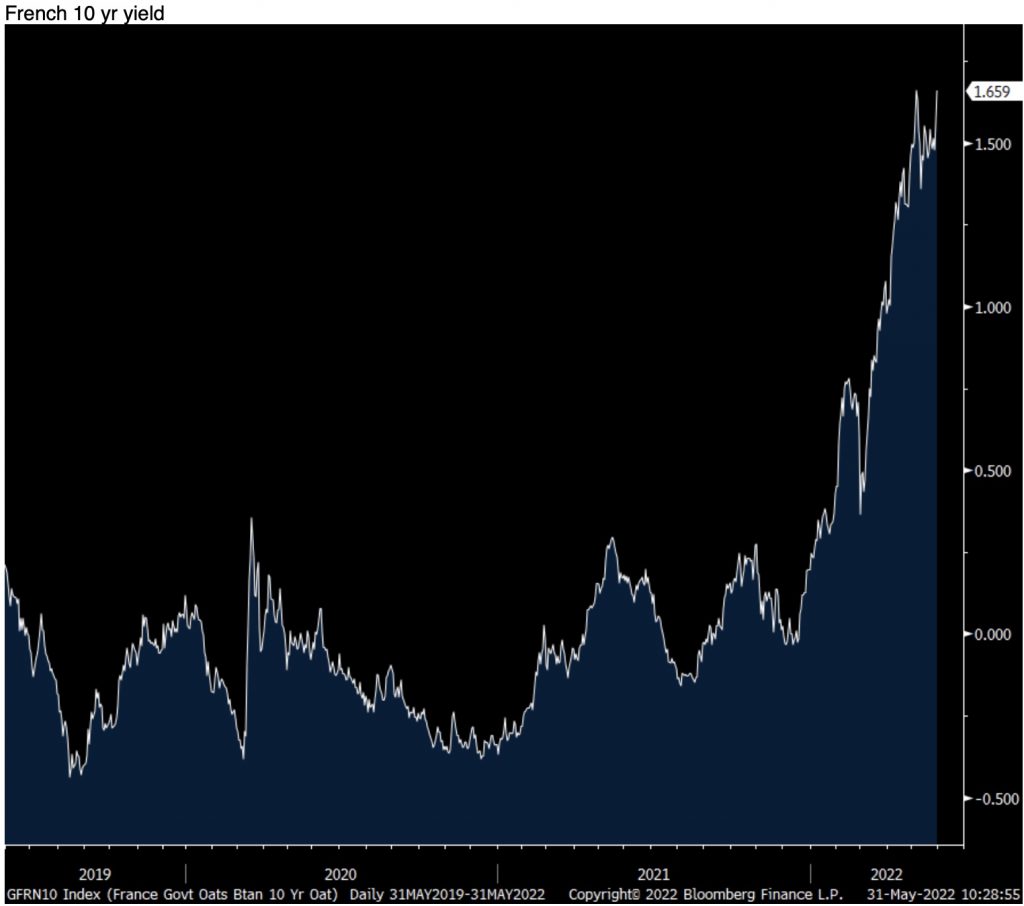 Major Breakout In German Yields Ahead?
Otavio Costa:  German 10-year yield is on the brink of a major breakout. If it does, very likely to accelerate from here.

It’s About Time, What Took You So Long? 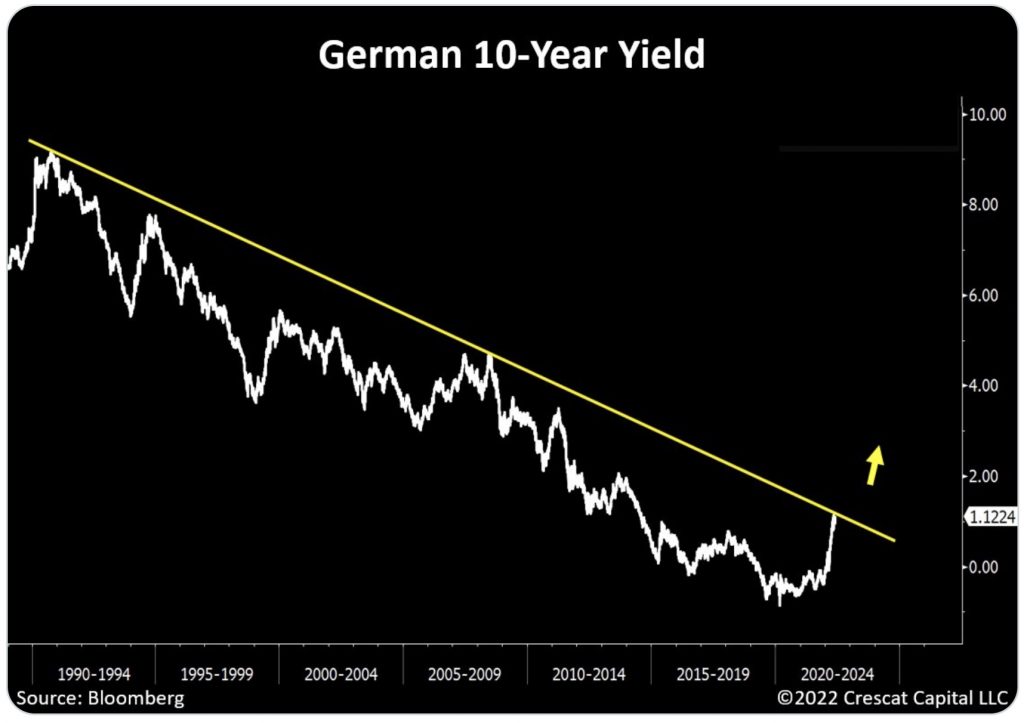