Investors need to buckle up for a wild ride because this is the first time we have seen this in 120 years!

It’s Going To Get A Lot Worse
April 26 (King World News) – Otavio Costa:  Five Pillars of Inflation. We are currently facing five early-stage structural changes in the macro environment that are likely to fuel a long-term inflationary problem:

As shown on the chart below, we have only seen 13 consecutive months where CPI stayed above 2.5%. This measurement puts into perspective how much longer CPI stayed above such levels during other inflationary regimes that also experienced similar macro forces serving as tailwinds for consumer prices.

INFLATION? WE HAVEN’T SEEN ANYTHING YET
We Have Only Seen 13 Consecutive Months
Above 2.5% Inflation But In The Late
1960s-1970s We Had 188 Consecutive
Months Of Inflation Above 2.5%! 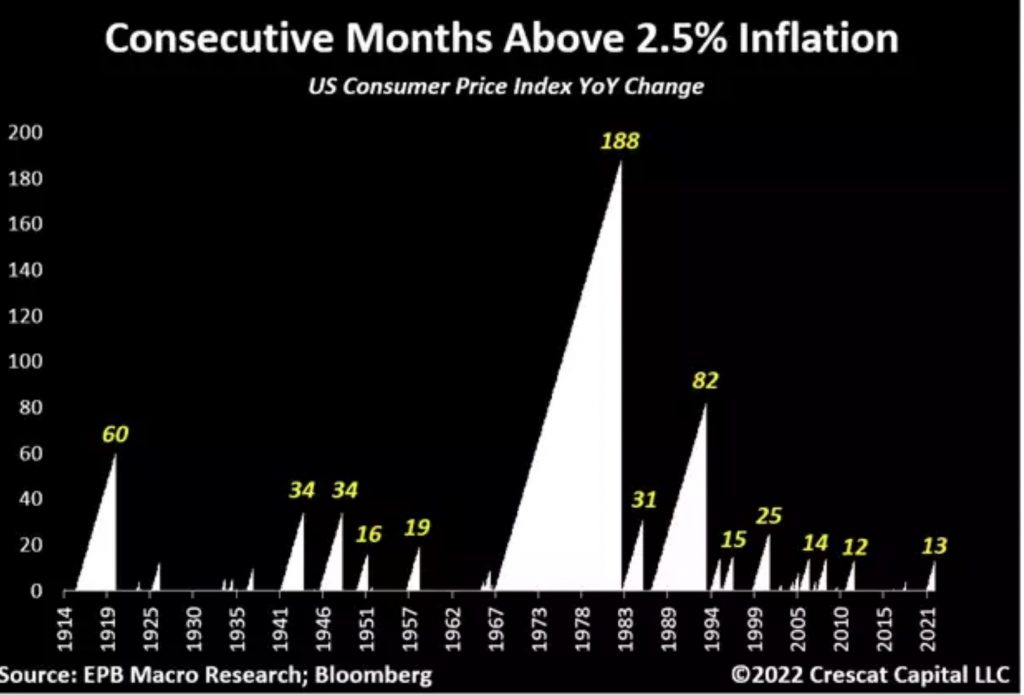 Inflation is concerning but the real issue is how policy makers are dealing with the situation. Amid the highest CPI prints in 40 years, today we have one of the most aggressive fiscal policies in history for how strong the labor market is. Hard to believe inflation will cool off from here. The Fed’s interest rate hikes can cool demand but work against the need to help finance an increased supply of critical resources.

Inflationary Crises
Bonds have served as incredible hedges during the last several downturns in equity markets. The rising inflation environment that led up to the tech and housing busts proved to be a cyclical force as the economy entered a significant downturn and nominal yields collapsed as a result. Inflation also decelerated drastically during the Covid crash in March 2020 and long-term rates declined in tandem. We fear investors are “fighting the last war” in expecting the same correlation to play out in the next major equity downturn. The structural changes in inflation today are causing this relationship to change drastically. Market participants are conditioned to think of sovereign bonds as safe havens, but that was not a reality during other inflationary regimes…

In 1968-69 and 1973-74, as equity markets collapsed and the economy entered a recession, long-term nominal yields increased instead. Such market developments are consequences of an economy facing long-term inflationary pressure rather than cyclical forces. We think Treasury yields and equity market correlations will look similar in the next recession. 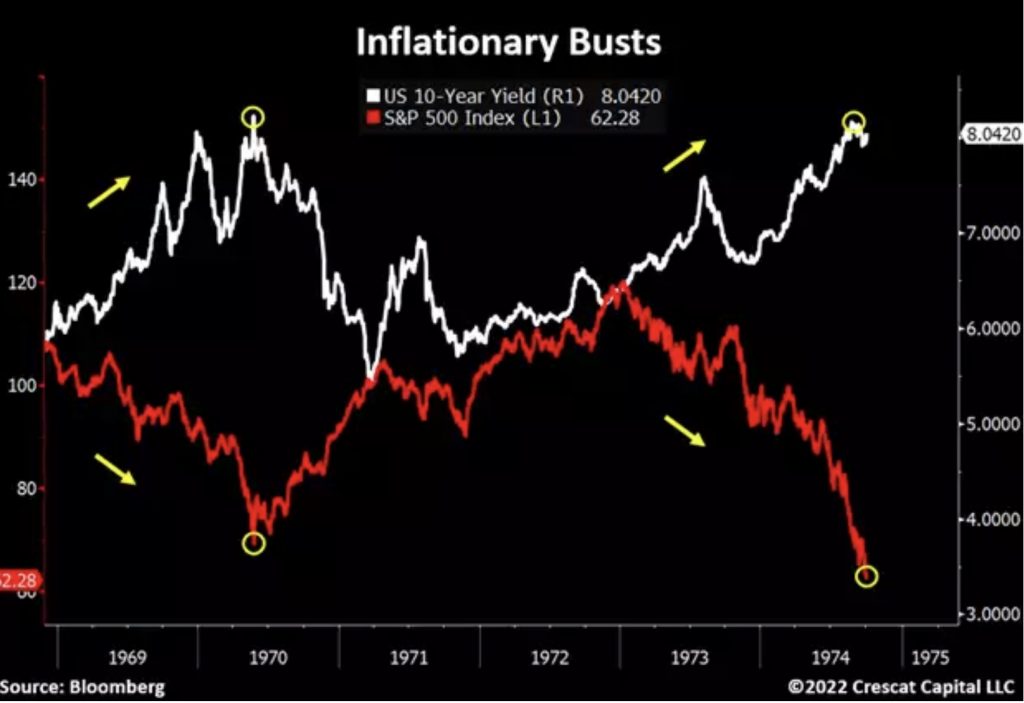 Gold and Miners Prevail During Inflationary Crises
Contrary to today’s conventional wisdom, note how gold miners increased 5-fold while the stock market declined 50% during the 1973-74 inflationary recession. We think a similar development will follow in the next economic downturn. 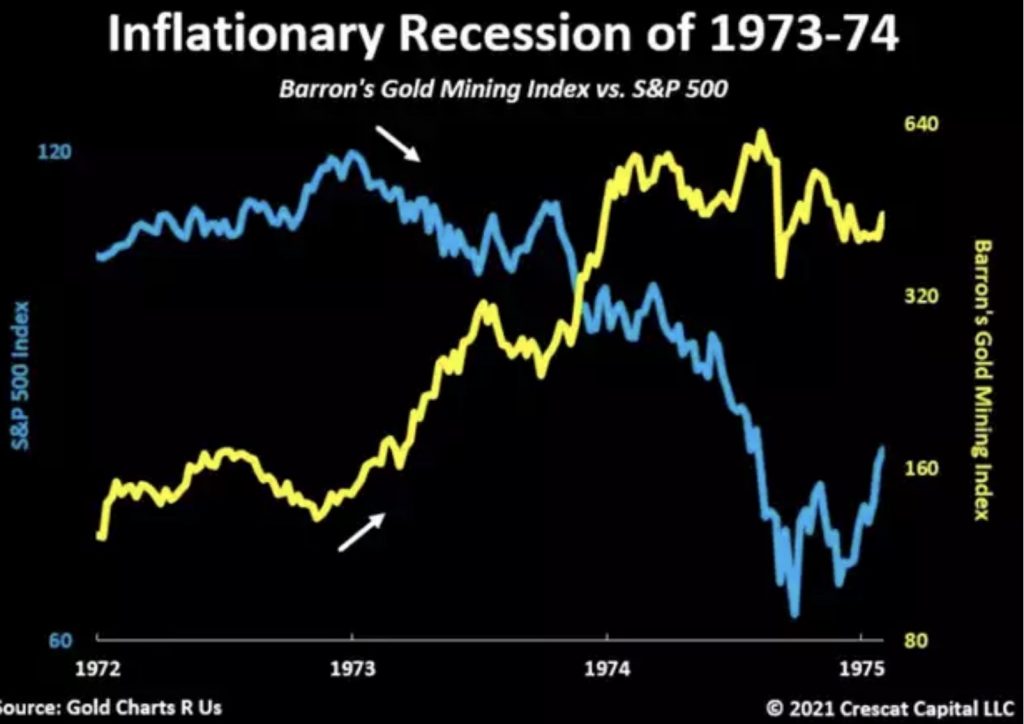 But does today’s macro setup really resemble the 1970s?
As tempting as it can be, the use of any one point in history as a guide may offer an incomplete assessment of what is likely ahead of us. For the first time in 120 years, the US economy is facing a trifecta of economic extremes. We need to combine the debt problem of the 1940s, the structural commodity shortages of the 1970s, and the speculative equity valuation environment of the late 1920s and 1990s in order to get a more complete picture of the macro setup that we have today. These imbalances create true political constraints to governments and central banks. It is hard for us to believe how inflation will not continue to be one of the major forces infiltrating the economy over the next several years to reconcile these imbalances.

1st Time In 120 Years US Economy
Faces Trifecta Of Extremes! 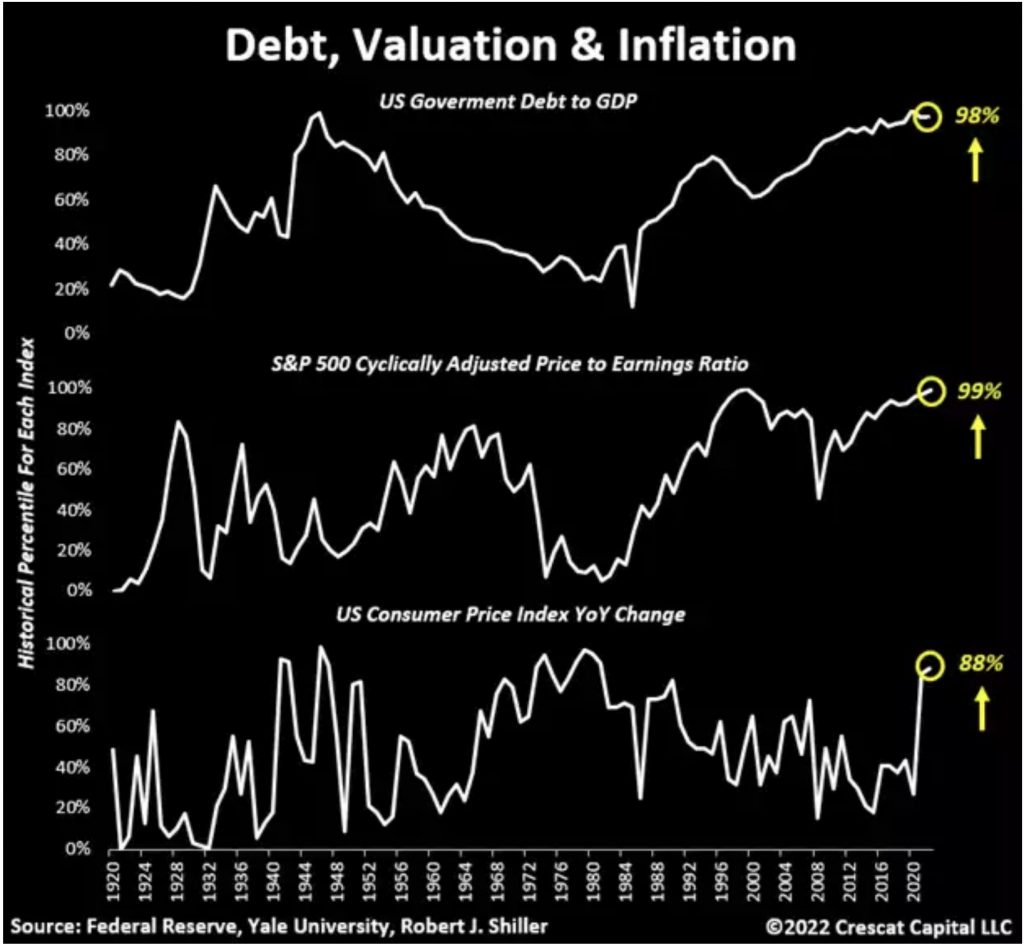 US Stocks vs. Gold
Not to be overlooked, US stocks in gold terms are just as expensive as they were at the 1929 peak prior to the Great Depression.

BUCKLE UP FOR THE RIDE OF A LIFETIME:
Dow Jones vs Gold Where It Was At The Peak
In 1929, Prior To 90% Stock Market Collapse
Where Gold Was Revalued Higher And
Mining Stocks Skyrocketed 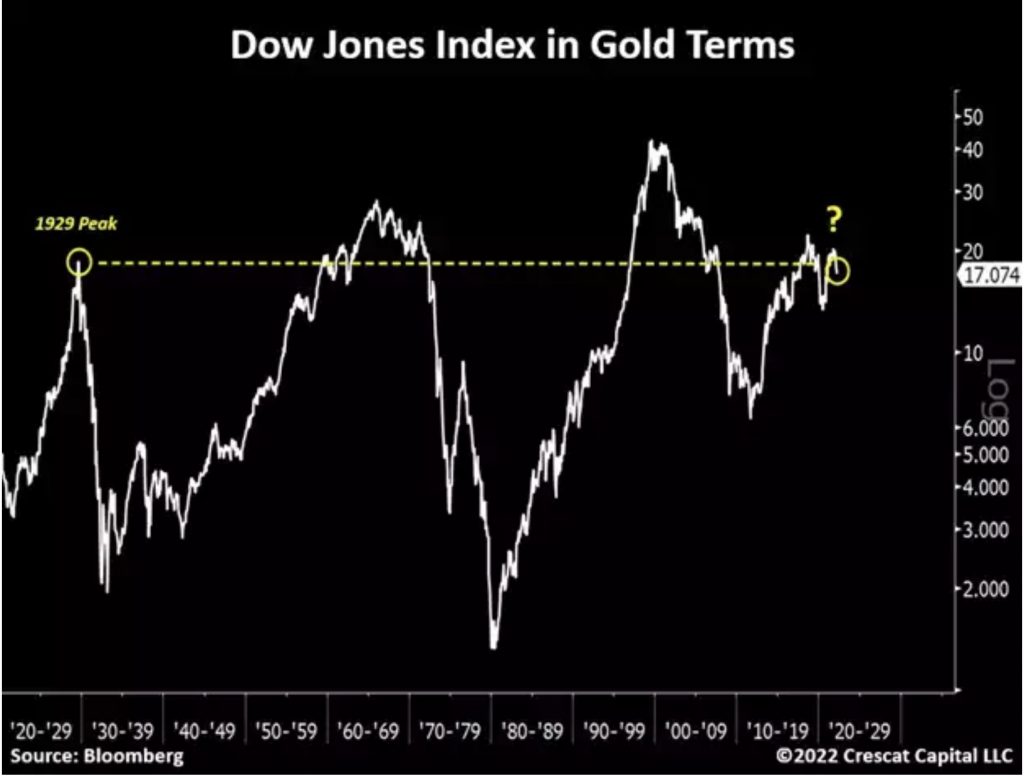 Greyerz – What Is Happening In The Physical Gold Market Is Remarkable