Investors may want to brace themselves for even more violent trading in the coming weeks because we are seeing some bad omens for the world.

Who Buys This?
Look at the preposterous ultra-long bond yields, and that’s if the countries don’t end up defaulting (see chart below).

WHO BUYS THIS? Ultra(Low)-Long Bond Yields 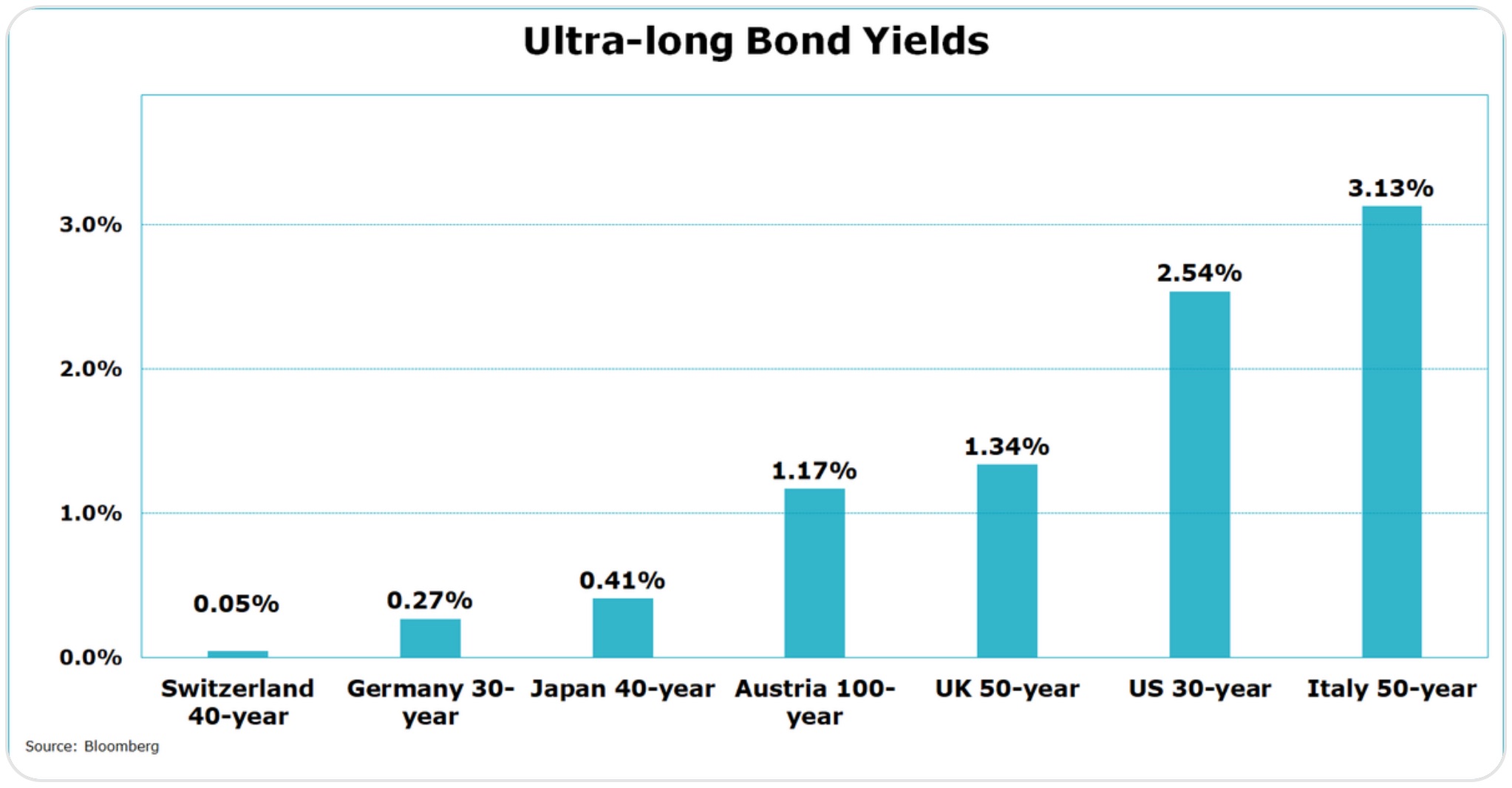 Jawboning Markets
Peter Boockvar:  “Treasury Secretary Mnuchin said nothing new in a CNBC interview this morning by saying the China deal is 90% done because it was 90% done before it was not done in early May. The last mile is the challenge. Back in early April when Liu He was last in DC meeting with Lighthizer, Mnuchin and others Myron Brilliant, the executive VP for international affairs at the US Chamber of Commerce said “90% of the deal is done, but the last 10% is the hardest part, it’s the trickiest part and it will require trade offs on both sides.” I’d say that fully applies today. Mnuchin walked out of that April Liu He meeting and said it was “constructive” and that was repeated on CNBC today. In other words, nothing new but of course markets responded. Copper spiked but then gave it all back.

If there was ever a reason to leave to the market the pricing of the fed funds rate instead of the Fed, it was listening to Jay Powell yesterday. He covered every base and talked out of all sides but it is quite the task to have these few individuals using their models to try to figure out. Anyway, he is all set up for a July rate cut which is what he expressed last week too. We do have to ask though is how they pull this back IF there is a satisfactory trade deal soon.

Bulls & Bears
According to II, investor sentiment got more bullish as Bulls rose to 53.3 from 50.5 and up from the low 40’s just a few weeks ago. That’s the most amount of bulls since early May. Bears fell .3 pts to 18.1. The spread of 35.2 between the two is at a 7 week high. II repeated that “spreads above 30% are warning signs while those above 40% call for defensive measures.” Thus, we are headed towards a more notable level of complacency.

After the disappointing May new home sales figure yesterday, mortgage applications to buy a home fell .9% w/o/w notwithstanding another big drop in mortgage rates to just 4.06% (see chart below). 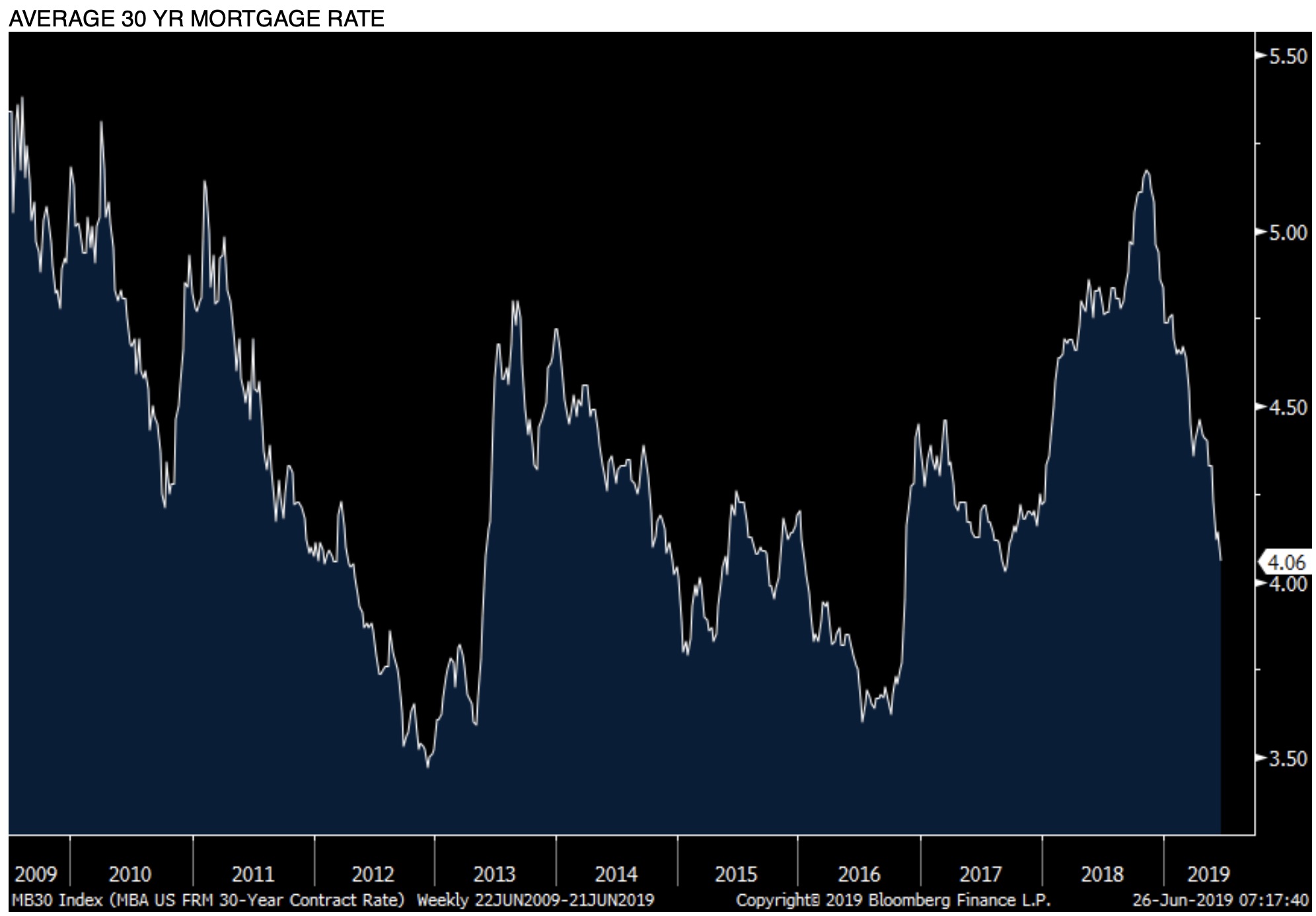 That said, sales are still up 9.2% y/o/y but that’s not a hard accomplishment considering that one year ago the average 30 yr rate was at 4.84%. Refi’s still are responding the most to the drop in rates as they grew by 3.2% w/o/w and 92% y/o/y. Lennar’s comments yesterday highlighted what we’ve seen in that most of the demand for new homes is on the lower priced end but that’s the group that has the lowest margins. The higher end is getting hurt by the cap on the SALT deduction.

“Euro Trades Damn Well Against The US Dollar”
They are never market moving but we saw consumer confidence figures from the two biggest economies in the Eurozone. The German figure for July (thus expectations) fell to 9.8 from 10.1, the lowest since April 2017. French consumer confidence on the other hand rose 2 pts to match the highest since January 2018 as it continues to recover post Yellow Vest protests. The euro is dead flat today but holding above $1.135. I’ll continue to say that with all the challenges of the Eurozone combined with the madness of negative rates, the euro trades damn well against the US dollar.

Big Changes
READ THIS NEXT! Everything Is Changing So Fast CLICK HERE TO READ

Gold Pulls Back, But What Is Happening Now Is Unbelievable CLICK HERE TO READ

James Turk – This Is What The Rocket Launch In Gold Means, Plus What To Expect Next CLICK HERE TO READ