This was the bottom line today from Fed Chairman Jay Powell, plus a look at household debt.

Bottom Line From Fed Chairman Jay Powell
November 13 (King World News) – Peter Boockvar:  “I think it only took one sentence in the entire Jay Powell speech that bottom lines his thoughts on future monetary policy: “We see the current stance of monetary policy as likely to remain appropriate as long as incoming information about the economy remains broadly consistent with our outlook.” In other words, we do not want to see more rate cuts from here (after the ‘insurance’ taken out) because of what that would imply…

I always try to point out that all Fed easing does is encourage the rest of us to borrow more, whether a business, household or the government. Hearing Jay Powell point out the end results today is like hearing a bartender who has handed out drinks all night and then asking why everyone is drunk at the end of the party. As my friend Rick Santelli just said on CNBC, here is a group that has aided and abetted all the debt accumulation.

In today’s speech Powell said, “Debt loads of businesses are historically high, but the ratio of household borrowing to income is low relative to its pre-crisis level and has been gradually declining in recent years.” Pre crisis should be our reference point on household borrowing when it went to record highs? The chart below reflects total household debt as a percent of disposable income. We are only back to the long term average, have only given back the bubble mid 2000 years and are way above levels seen before. 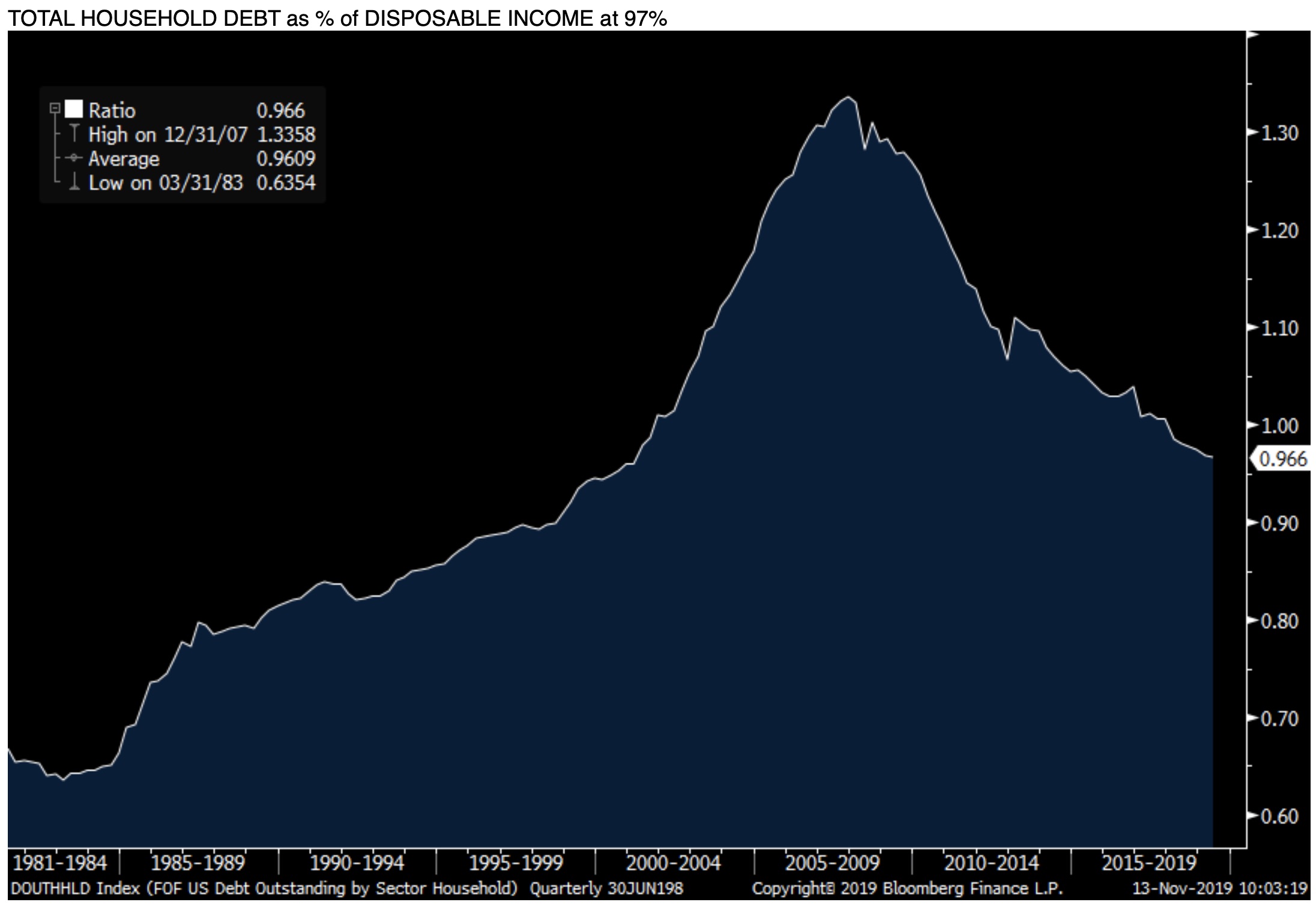 Also, “the federal budget is on a unsustainable path, with high and rising debt…I remain concerned that high and rising federal debt can, in the longer term, restrain private investment and, thereby, reduce productivity and overall economic growth.” This as the Federal Reserve is now essentially monetizing the US T-bill market after exploding its balance sheet over the past 10 years while keeping rates at zero for 7 years, all of which Jay Powell voted for.

Eric King:  “John, your company has recently gone on sale, but you are financed and your fundamentals are better than they have ever been.  What are the biggest catalysts coming out of tax loss season that will give your share price a major reversal going into the first quarter of next year?”

John Awde:  “Eric, we are rapidly advancing our project through development, and most importantly, we are finding brand new feeder systems. We announced our PFS (Pre-Feasibility Study) in September that we were very pleased with and there are a number of ways for us to optimize the project in terms of the economics, lower the capital required, and extend the mine life.

We have also completed a couple of our deep holes underneath Dark Star.  We now believe there is some kind of feeder zone or deep sulphide underneath Dark Star.  This could be a game-changer for the company.  We are also moving towards completing the feasibility study.  It should only take 6 or 7 months to convert all of the ounces from inferred to measured and indicated ounces.

And lastly, Eric, we are going to be filing our EIS, which will start the clock on permitting.  Our entire team believes we are ripe for another discovery and that would really put Gold Standard Ventures into an entirely different category.” Gold Standard Ventures, symbol GSV in the US and Canada.

***KWN has released the powerful audio interview with Alasdair Macleod and you can listen to it by CLICKING HERE OR ON THE IMAGE BELOW.