Here is the big picture outlook for 2021 from one of the greats in the business.

January 25 (King World News) – Liz Ann Sonders, Chief Investment Strategist at Charles Schwab:  In our 2021 outlook, we unveiled a visual highlighting the “K-shaped” nature of the COVID era, as seen below. In this report, we’ll share our thoughts on these divergences; including which are likely to persist, and which are already starting to converge. I’d like to give a shout-out to my research associate Kevin Gordon for his ample work on this analysis. 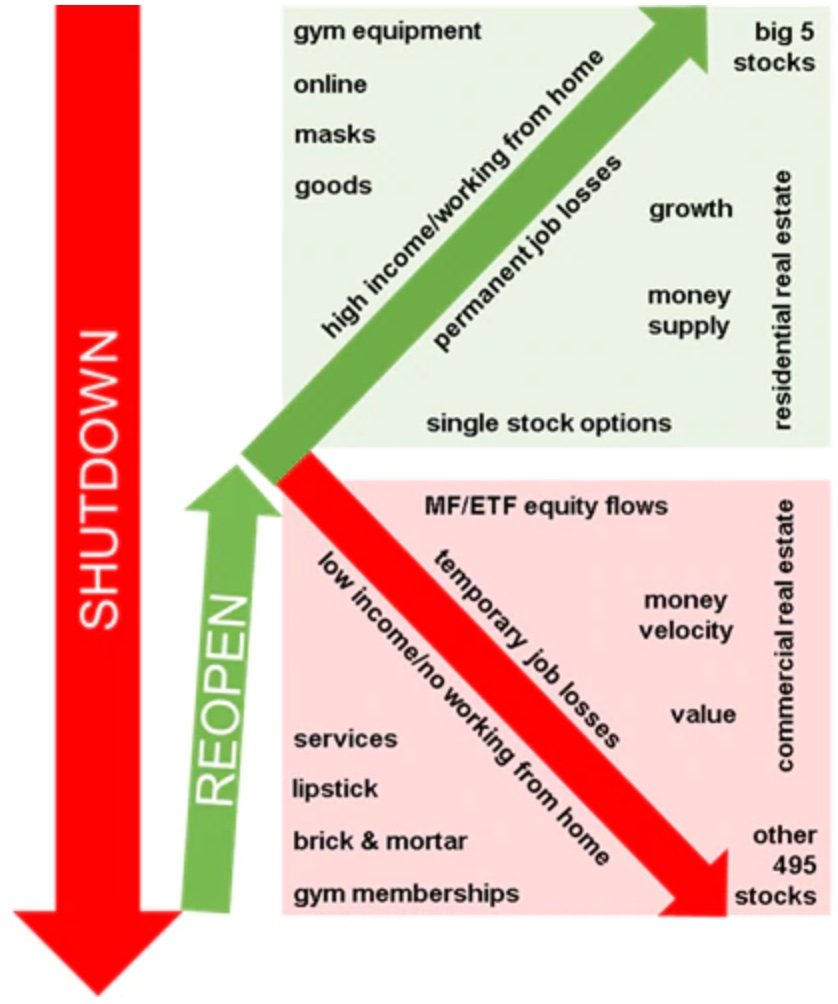 The initial phase of the COVID crisis channeled aspects of many past calamities—the Great Depression in size, the stock market crash of 1987 in speed, and the 9-11 attacks in fear. With the benefit of hindsight, we know that some groups and industries were much better suited to handle that bitter combination; while others now face threats to their long-term survivability; thus resulting in the K-shaped nature of the recovery in which we find ourselves. As the economy began to reopen in some capacity last summer, we saw major splits between the haves and have-nots; pandemic winners and losers; and stay-at-home and get-out-and-about sectors. This report will look at what chasms have already started to close, those that are likely to converge sometime in the future, and those that may remain diverged…

Already (or soon to be) converging
We can start with gaps that are already starting to reverse. First up in the converging camp is large- and small-cap stocks. As you can see in the chart below, large caps fared much better during the initial plunge into bear market territory and subsequent rebound; while small caps didn’t erase their pandemic losses until November. Yet, the announcement of both Pfizer’s and Moderna’s vaccine effectiveness in early November gave small caps—along with other cyclical areas of the market—a significant boost as investors began to pull forward their expectations of a rebound in growth. As a reminder, we made the tactical recommendation on November 16th to “upgrade” small caps from underweight to neutral, and to “downgrade” large caps from overweight to neutral. 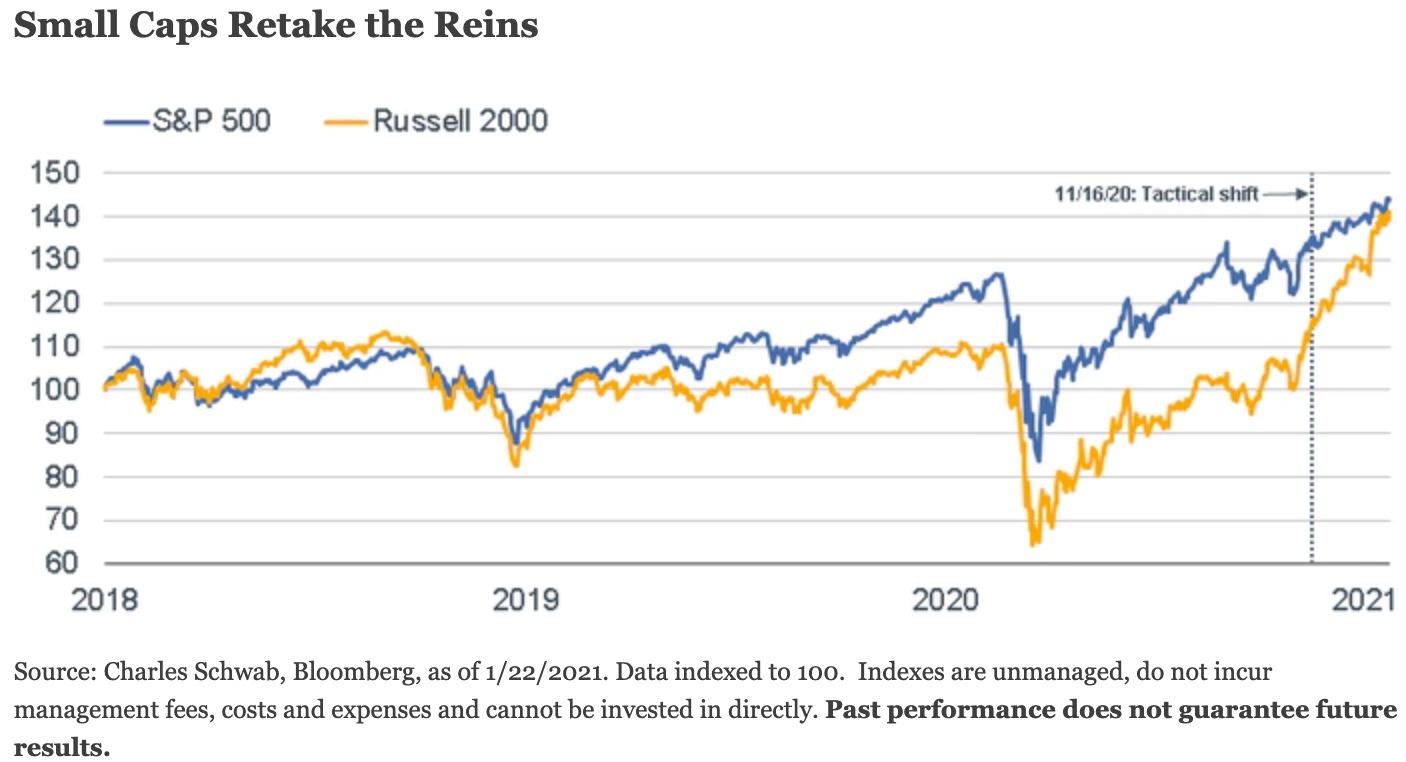 Balance sheet strength was a much-lauded factor last year, as companies in strong financial positions experienced solid performance both during and after the bear market, as seen in the chart below. Those stocks have still performed well heading into the new year, but companies with weak balance sheets have had a nice run since early November—underscoring broad participation within the market based on hope about an improving economic backdrop. 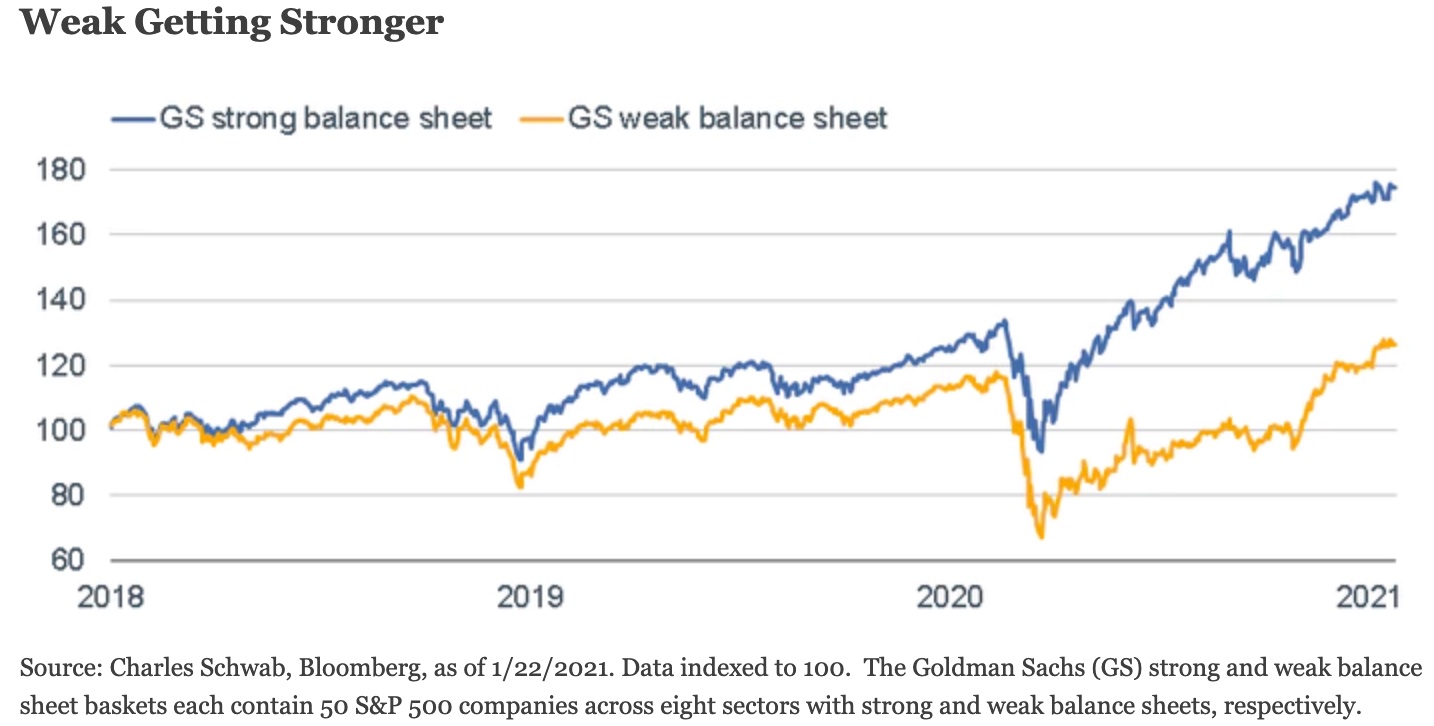 On a similar note, there was a clear divergence in sector performance during the worst of the crisis. As seen below, the COVID “winners” within Technology, Consumer Discretionary and Communication Services held up quite well as working from home, e-commerce, and web communication were aggressively embraced. Conversely, the collapse in interest rates, oil prices and general activity/investment dealt a huge blow to the COVID “losers” within Financials, Energy and Industrials. The latter group’s gains have been impressive over the past few months, initially spurred by positive vaccine news. 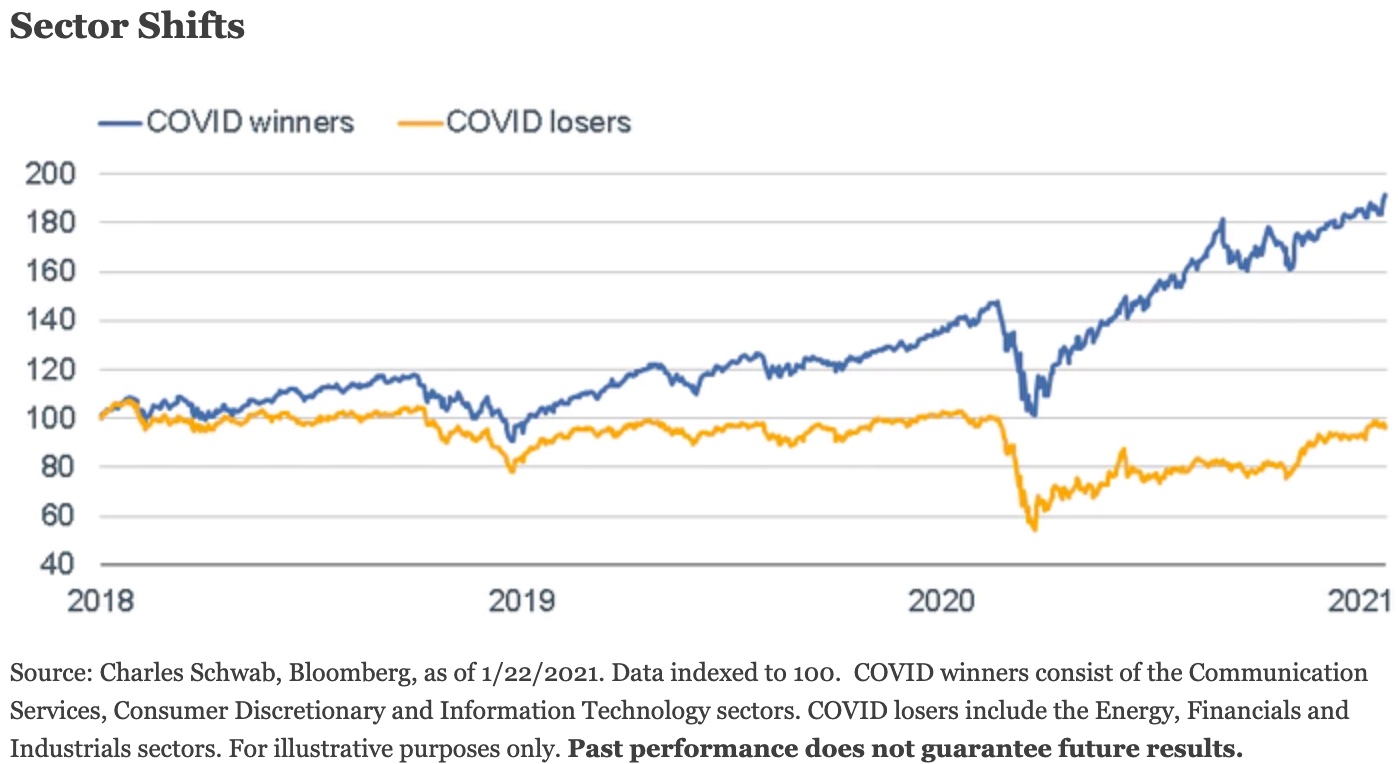 With the excitement around the cyclical trade has come enthusiasm for value stocks. As seen below, value has found a bid. As the recovery gains traction, value in general should perform well—but it’s largely due to sector composition within the value indices. To wit, the Technology sector alone makes up nearly 45% of the Russell 1000 Growth Index; while Financials and Energy constitute nearly 25% of the Russell 1000 Value Index. Thus, we would expect growth to struggle more relative to value if investors embrace cyclicality at the expense of prior winners; although the gap is admittedly still wide. 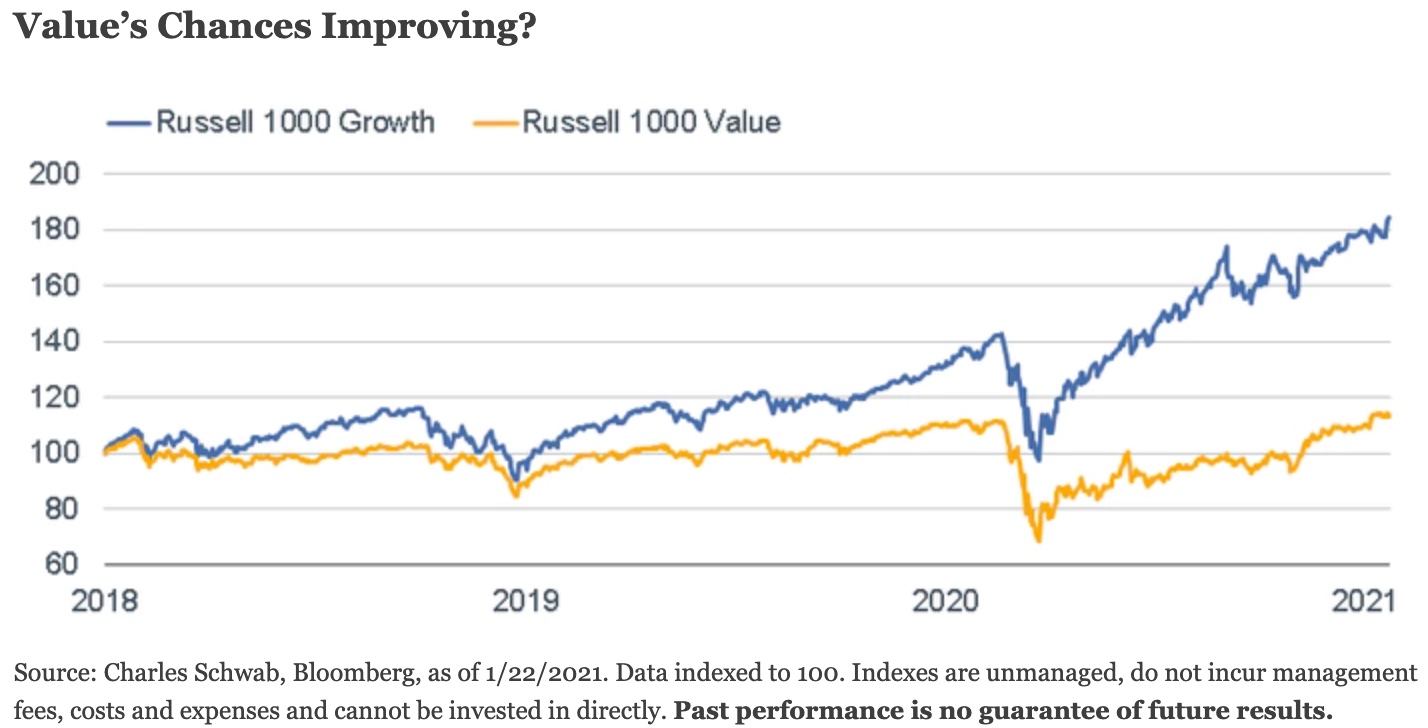 One of the more dramatic themes last year was the superior outperformance of the “big 5” companies—the largest five stocks in the S&P 500 by market cap—relative to the rest of the market. Year-to-date through September 2, 2020—when the big 5 accounted for 25% of the S&P 500—they had outperformed the other 495 by 62 percentage points. The big 5 subsequently suffered a meaningful correction; and as seen below, they’ve mostly moved sideways since. The latest pop is likely tied to recently-weak economic data, which could continue to lend support to the prior COVID winners; at least until the recovery gains traction again. 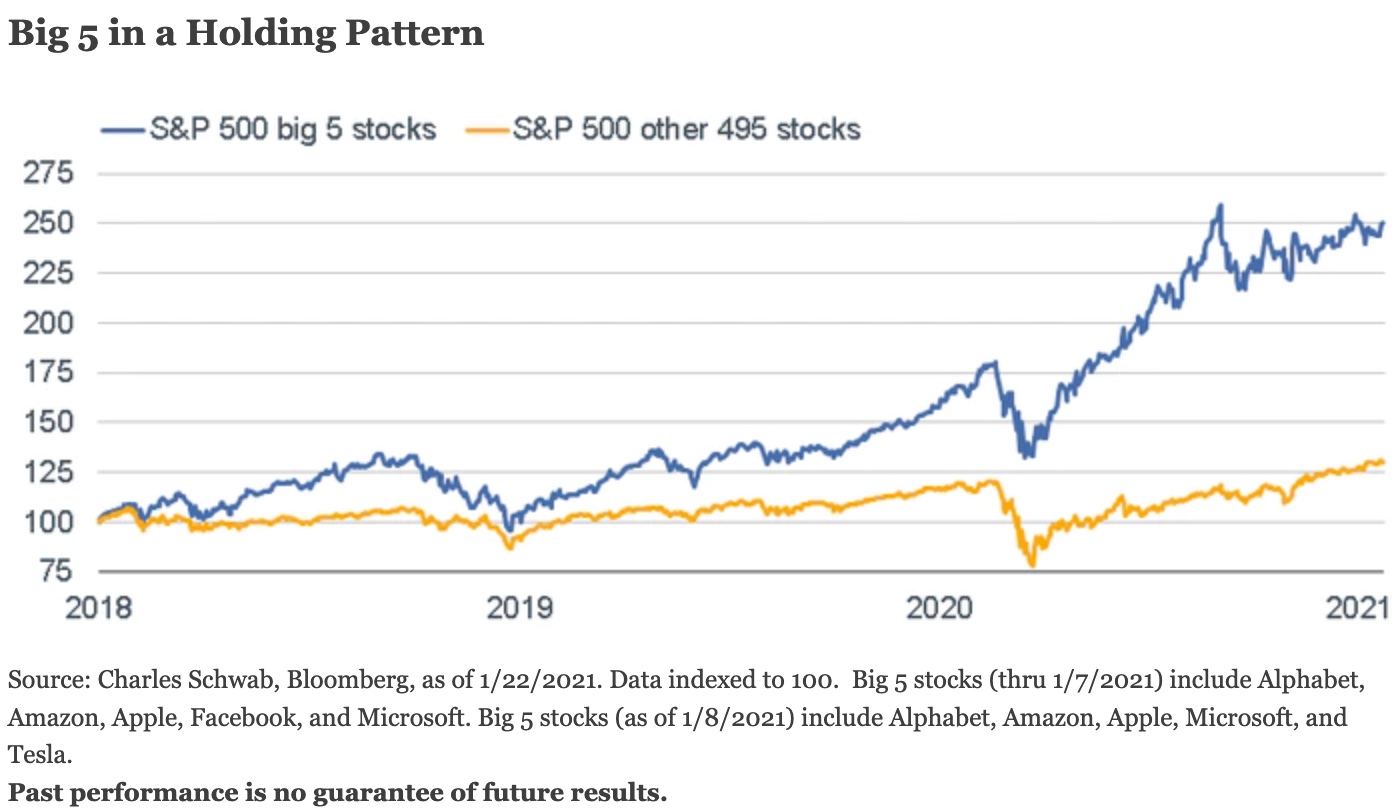 Given sectors like leisure/hospitality were hit hardest by the pandemic, the services side of the economy struggled markedly in 2020 while the goods side held up well—a reversal of the usual trends we see in recessions. As seen below, spending on services remains below pre-pandemic levels, while spending on goods had a complete recovery. As the economy improves, consumers regain confidence and businesses adapt, we should see a convergence with a lift in the services side of the economy.

Convergence down the road
Some gaps may take longer to close. As seen below, the “stay at home” stocks are still outperforming the “reopening” stocks by 150% since the beginning of last year. In the near-term, the reopening cohort will likely continue to face headwinds, especially as the rapid spread of the virus means continued regional lockdowns. 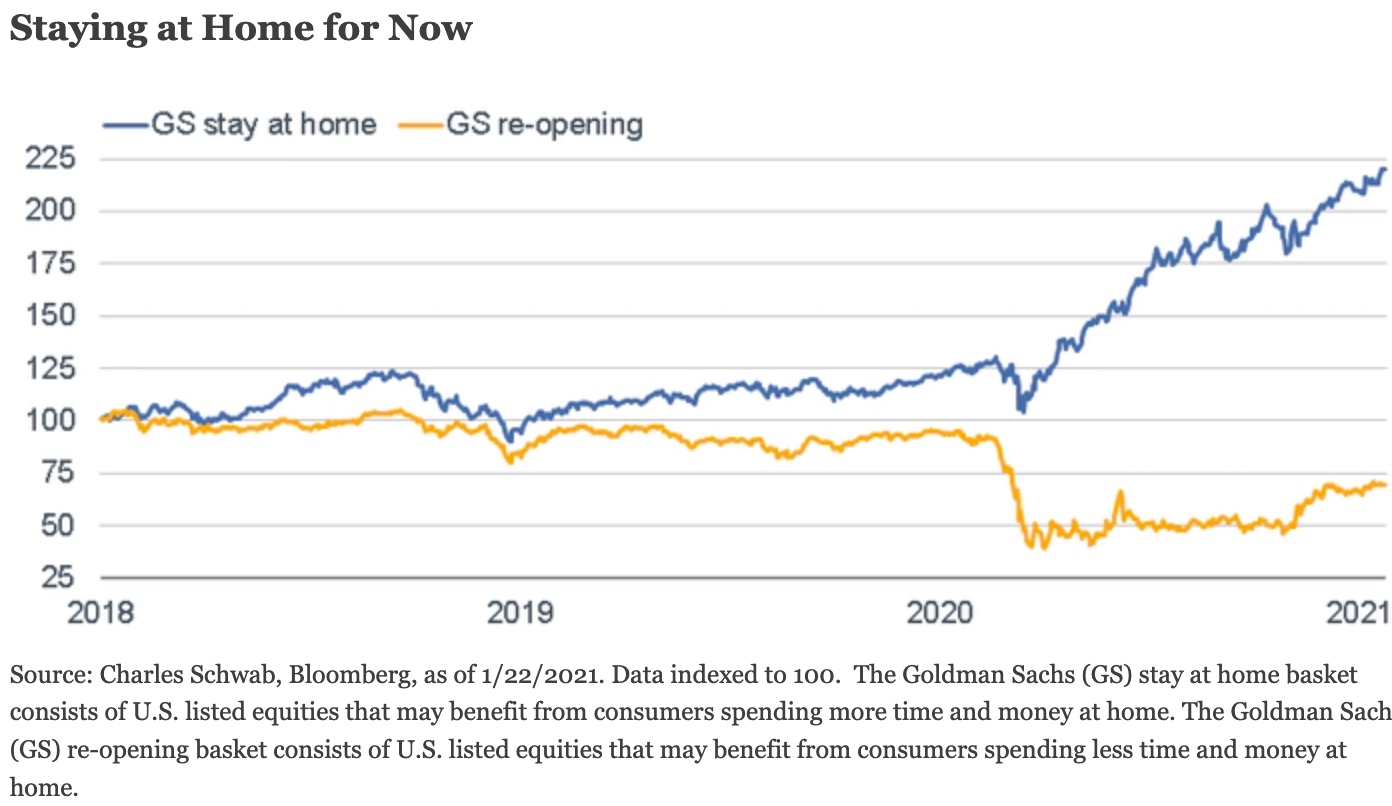 It’s no surprise that restaurants were among the hardest-hit businesses in the pandemic given social distancing measures and consumers’ lack of willingness to go out. As seen below, food/drink retail sales took a massive hit last year and are still well below pre-pandemic levels; while e-commerce sales—uninhibited by the lack of mobility—have increased. With the vaccine rollout off to a slow start, it may take a bit longer for the restaurant industry to make up lost ground; especially since so many have permanently shut their doors.

We continue to believe that the labor market is key to assessing the long-term health of the economy. December’s nonfarm payrolls report from the Bureau of Labor Statistics confirmed we’re still 9.8 million jobs short of the pre-pandemic peak; but there were some improvements worth noting. Permanent job losses ticked down and may have halted their ascent for now, alongside an increase in temporary unemployment, given mass layoffs in leisure/hospitality. It’s too soon to tell whether permanent job losses have peaked; but as long as they don’t reaccelerate, the “scarring” effect on the economy should be reduced.

Divergences: the good and the bad
The pandemic acted as an accelerating force for many trends that were already underway heading into the crisis. One of the more positive divergences has been between household net worth and debt. Seen below, over the past couple years, consumers’ balance sheets have strengthened, thanks in part to a years-long deleveraging that began after the Global Financial Crisis. Net worth has been given a significant boost courtesy of the surging stock market as well higher home prices; while consumers have also been prudent in adding to savings and paying down debt.

As seen below, the boost in savings last year was swift and record-breaking. By last April, the savings rate shot up to 33.7% while spending dipped. A combination of further fiscal relief and heightened discipline towards saving may keep these two series at odds with each other; especially if the jobs recovery moves at a slower pace and consumers remain hesitant to increase spending.

With the massive monetary and fiscal stimulus came a record spike in M2 money supply, as seen below. Conversely, money velocity has fallen and moved sideways, as funds still haven’t made their way through the economy via the borrowing/lending, investing and spending channels. With the Federal Reserve still taking an extremely accommodative stance, M2 growth may stay quite elevated for the time being. 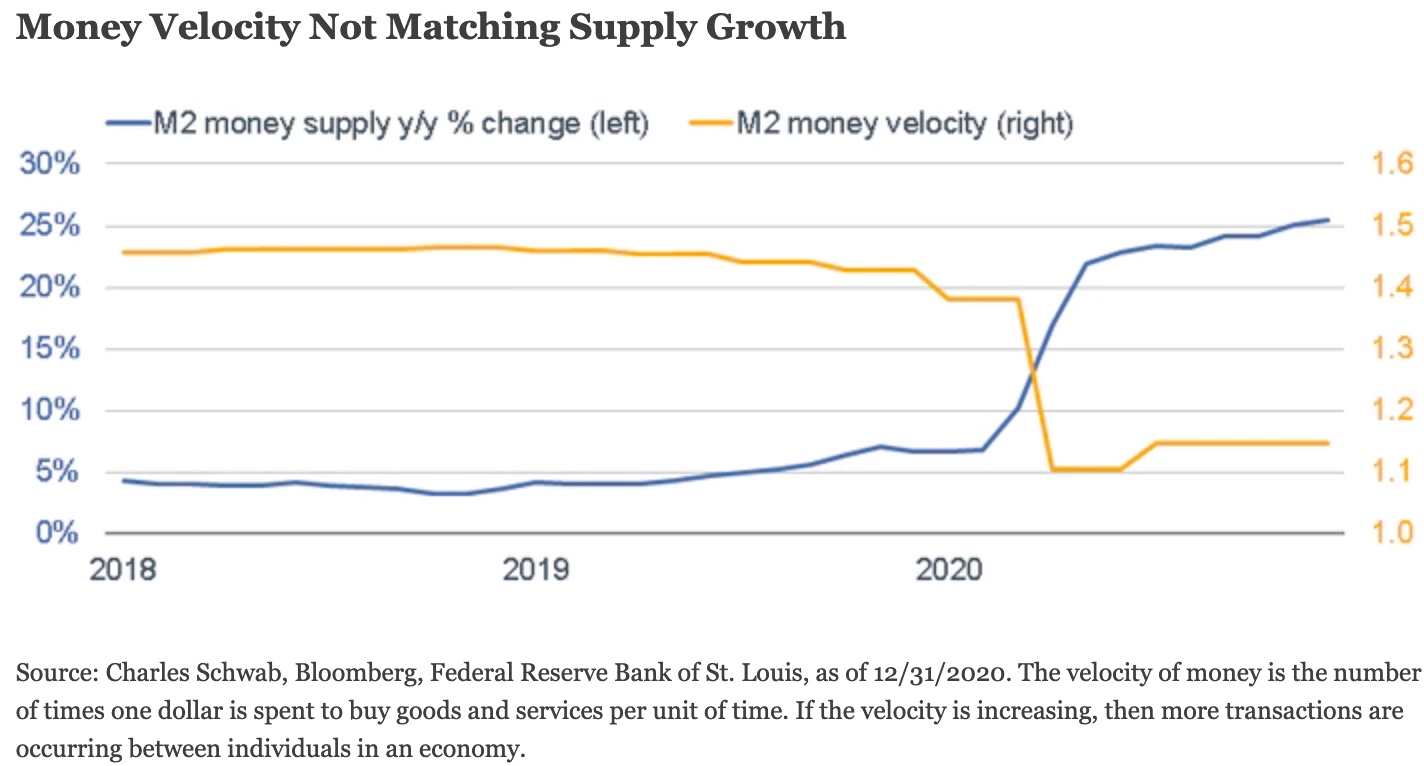 Unique to this crisis was a government-mandated shutdown of the economy which essentially froze business investment. Companies’ decisions to operate virtually dealt a blow to major cities and capital spending (fixed investment); but provided a major lift to residential investment, as seen below. The homebuying spree won’t last in perpetuity; while business spending may take some time to recover, given some lingering uncertainties with regards to reopening and consumption patterns.

A particularly fascinating divergence has been the rise of stocks favored by the retail trader crowd relative to those preferred by hedge funds. As seen below, the former has been outperforming the latter since last November. These two groups may converge at some point down the road; but for now, the retail favorites remain decisively in the driver seat. 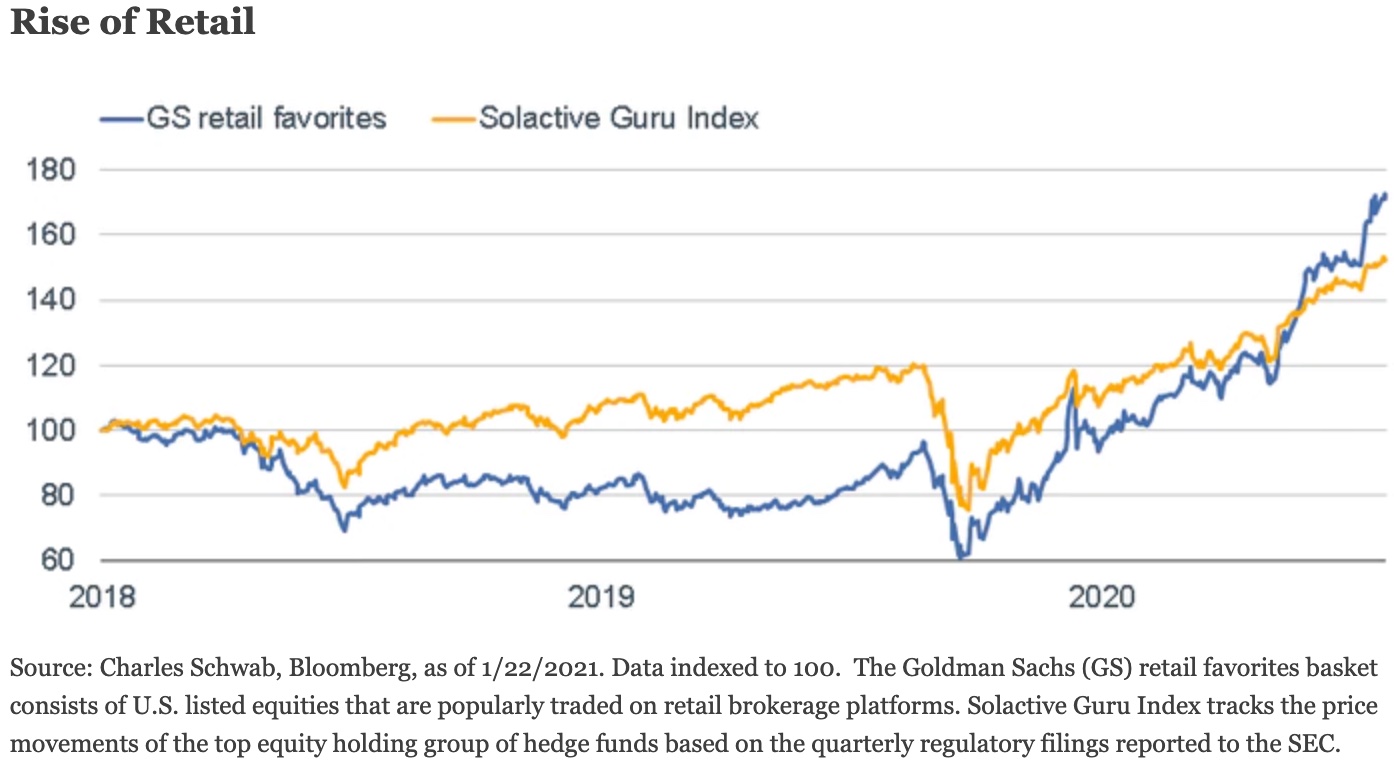 It’s clear that the retail crowd has been spot-on for much of the rally since the market’s bottom last March, but the market’s success has also bred perhaps its biggest risk: the rise in speculative behavior. For the better part of nearly two months, we’ve been highlighting the buildup in excessive optimism among nearly all sentiment indicators—both attitudinal and behavioral. Similar to what we saw in the run-up to the September 2nd highs, options trading among individual investors has exploded again; with call option purchases hovering near record levels. Froth may be pervasive, but as has been the case for the past few weeks, strong breadth and momentum have been at the market’s back; providing, for now, a positive offset to frothy sentiment conditions.

In sum
For better or worse, the pandemic has acted as an accelerator of major shifts in trends—some of which predated the crisis. While the world continues to make progress on the vaccine front, which in turn is raising hopes of a return to some kind of normal, we remain in the “creative destruction” phase of the recovery—which will mean fits-and-starts for both the economy and the stock market.

James Turk discussed the silver cup and handle formation and why we’re headed into a mania in the precious metals, to listen to his powerful audio interview CLICK HERE OR ON THE IMAGES BELOW.

ALARMING: This Spells Big Trouble For A World Already In Crisis, Plus Gold’s Next Target And Hi-Ho Silver

Alasdair Macleod – What Is Happening In The Gold Market Is Extraordinary