As the prices of gold and silver continue to surge, it turns out this is one hell of a crisis.

This Is How Bad The Situation Really Is
June 1 (King World News) – Jeff Snider at Alhambra Partners:  Another 2.1 million Americans have filed this week with their state governments in order to determine their eligibility for unemployment insurance. That brings the 10-week disaster total for these initial jobless claims to an enormous 40.8 million. How did it get to be so many, and why, as states are opening back up, is it continuing in the millions all the way through the month of May?

This is not simply a case of disease and the panicked government response to really, really bad virus models. It is almost certainly, as I’ve written throughout the pandemic, the combination of three big errors all drawn from what’s always called objective science but in reality are dangerously simplified subjective opinions based on very little useful knowledge.

The epidemiology estimates aren’t even the biggest of the three mistakes.

Those belong to econometrics, as usual, which told politicians worldwide that the global economy in general, and various domestic economies specifically, were in pretty good shape to begin this thing. Trade wars were receding and central banks had responded in force to what the models all treated as an otherwise rapidly fading minor nuisance (in actuality a globally synchronized downturn).

With central banks and federal governments now throwing “stimulus” into overdrive, the perceived effectiveness of which being their third error, the prior belief in the strong economy starting point absolutely convinced officials they could institute these devastating shutdowns with manageable economic disruption.

Only, these negatives continue to seriously pile up week after week. Even the Fed Chairman realizes for his actual contributions (very little) he’s put everyone in a very tough spot. Therefore, the really obvious and truly shameful fit of outright lying.

Companies are clearly still in the mood to purge employees. Why?

After all, the government has handed out hundreds of billions in cash loans (which will almost certainly be forgiven, meaning they’ll be turned into grants) for all sorts of purposes on top of the “helicopter” payments to citizens meant to keep up some minimally acceptable level of overall spending.

To begin with, the thing about jobless claims is that you first have to be involuntarily separated from your previous employer. This rules out the “gaming” of the system taking place as Congress generously bumped up unemployment payments more than what the lowest paid workers receive. In other words, you can’t quit your job in order to get paid more on unemployment; the process begins, and ends, with employer action. 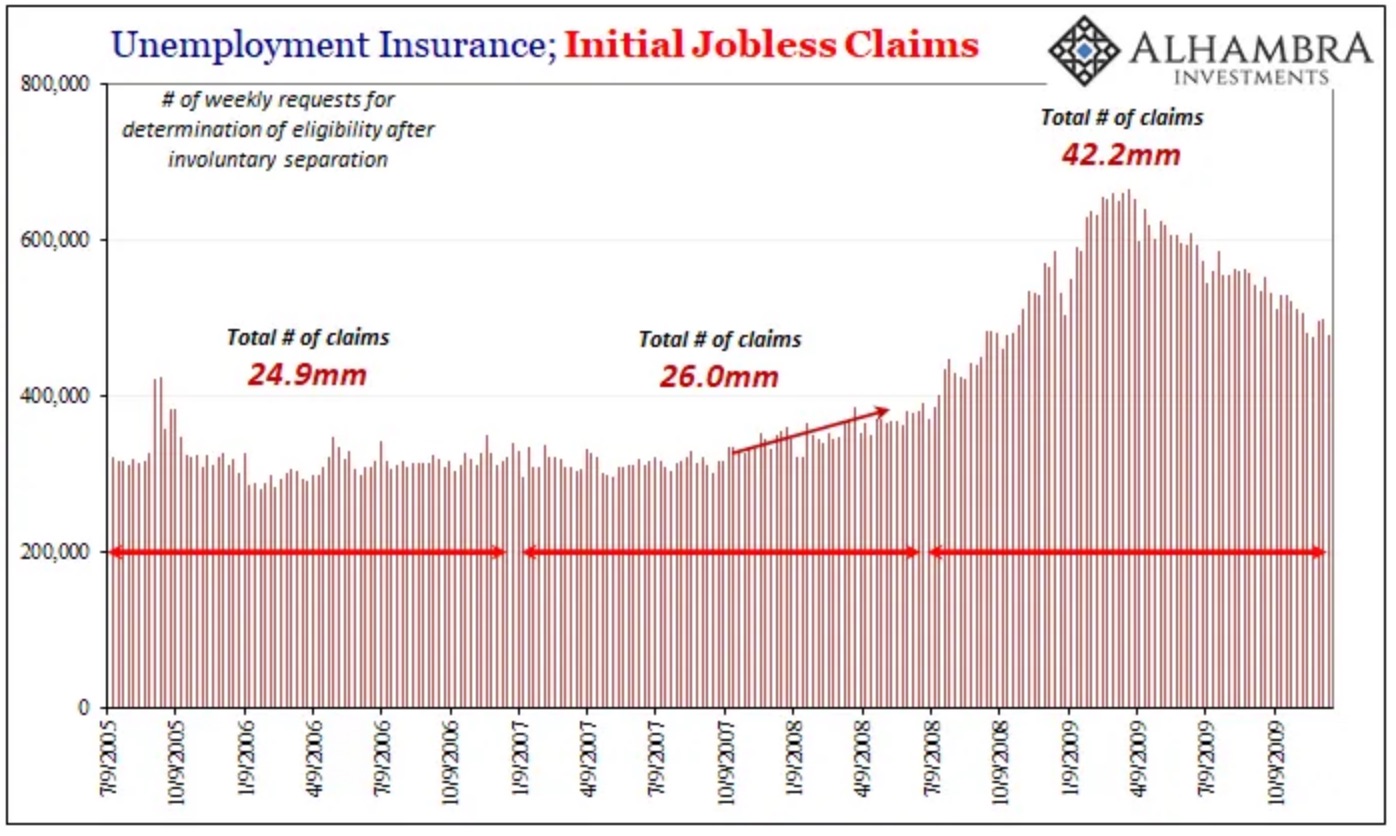 To give us a sense of the relevant context, we can go back to the Great “Recession” for some badly needed scale. While 40.8 million in 2020 is whatever counts as more than alarming, over the worst part of the 2008-09 contraction jobless claims added up to about 42.2 million. That compared to around 25 million in the same number of weeks (about a year and a half) over the last half of 2005 and all of 2006, and then 26 million throughout 2007 and through the first half of 2008.

It was only around July 2008 that jobless claims really accelerated. And, as the cumulative total piled up by October 2008, that plus the obviousness of GFC1 changed the labor force in a way no post-war recession had before. American workers began dropping out of it by the hundreds of thousands, thus beginning the as-yet unresolved participation problem right in the thick of what was a global dollar shortage.

Subprime mortgages ultimately had very little to do with any of this. It had instead everything to do with liquidity and company behavior.

Given that it was a monetary event, you can begin to appreciate why it had become so bad in the labor market (a net increase of ~16 million jobless claims beginning in July 2008 represented a truly enormous wave of layoffs). Companies weren’t just hit with declining revenues, as in any recession, they also were made to understand how they couldn’t depend upon banks and markets for even the basics of working capital cash.

Liquidity risks were no longer mere troubling perceptions, survival was at stake for even the best of names.

I’m talking about companies like McDonalds which needed (and always needs) to fund working capital regardless of health, ill or not, on its top or bottom lines. Banks withdrew liquidity backstops and credit lines, and then commercial paper became impossible to negotiate on reasonable terms.

Some like McDonalds, Verizon, and Caterpillar were forced to almost beg. In one of the more absurd aspects of the 2008 panic, there was the global fastfood chain knocking at the door of the Federal Reserve getting it to buy commercial paper the market wouldn’t on any terms. Big Macs had become Too Big To Fail, too.

What do you do if as a C-Suite officer you found yourself in such a situation? The first thing is that you vow never to be so vulnerable again. As a company, you make it a policy, informal or otherwise, to self-insure on liquidity. That means any number of things, up to and including holding large cash balances far greater than you ever would have before August 2007.

While the panic was ongoing, slash to the bone! Conserve cash at all costs, including an over-attention to the cost structure – therefore, the shocking number of 2008 and 2009 layoffs that actually continued well into 2010. It was that bad, as the American labor force began to realize right when it started in October 2008. 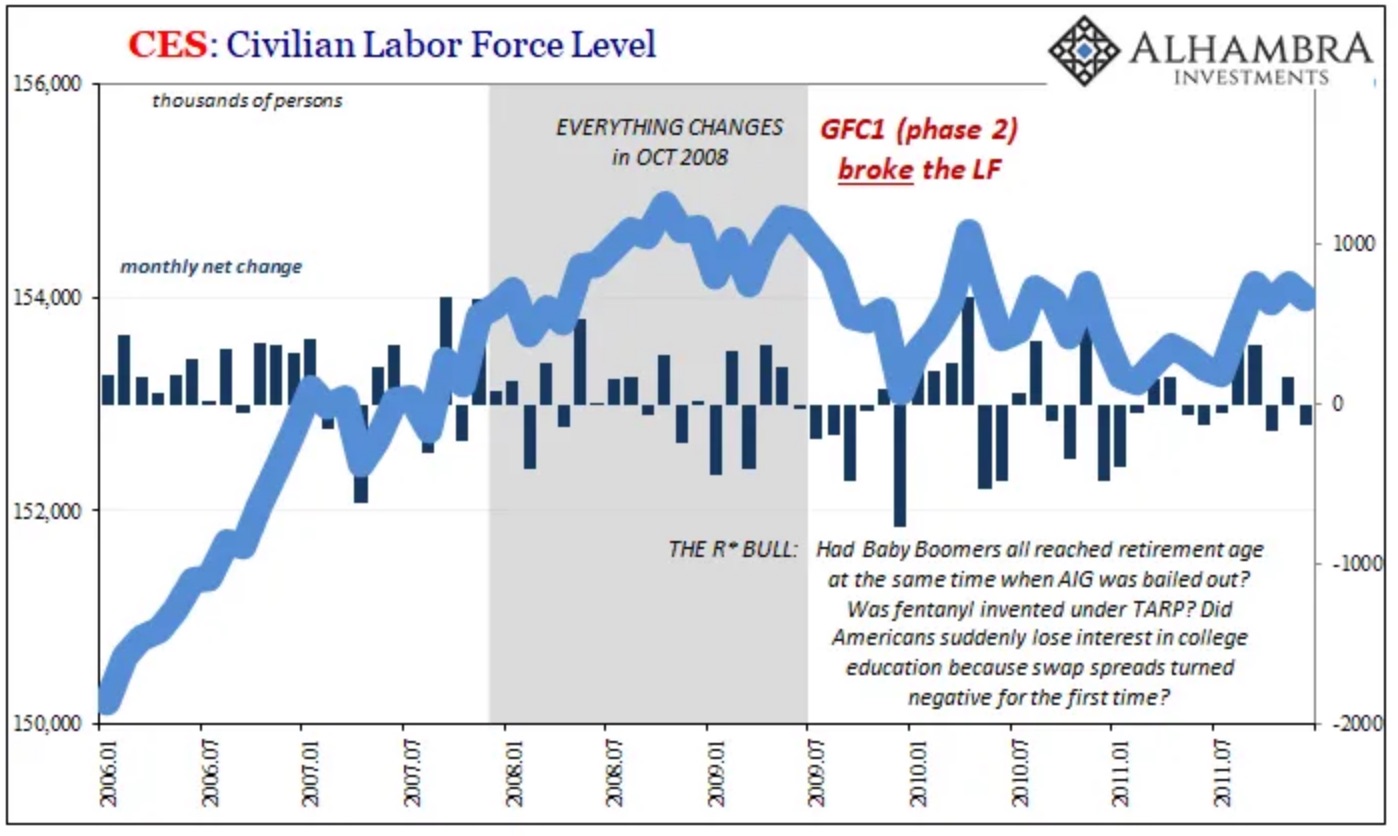 And it explains a lot about why jobless claims have been so low over the last ten years since the labor market finally bottomed out; that attention to liquidity risk and therefore the cost structure has never gone away. Layoffs have been minimal for years because businesses never hired that many back. Job growth has likewise been almost non-existent (2mm payrolls per year is pitiful) precluding the need for large numbers of layoffs and employee turnover in the post-GFC1 era.

The Fed says it flooded the world with liquidity, but companies sure haven’t seen it, or acted out, that way. 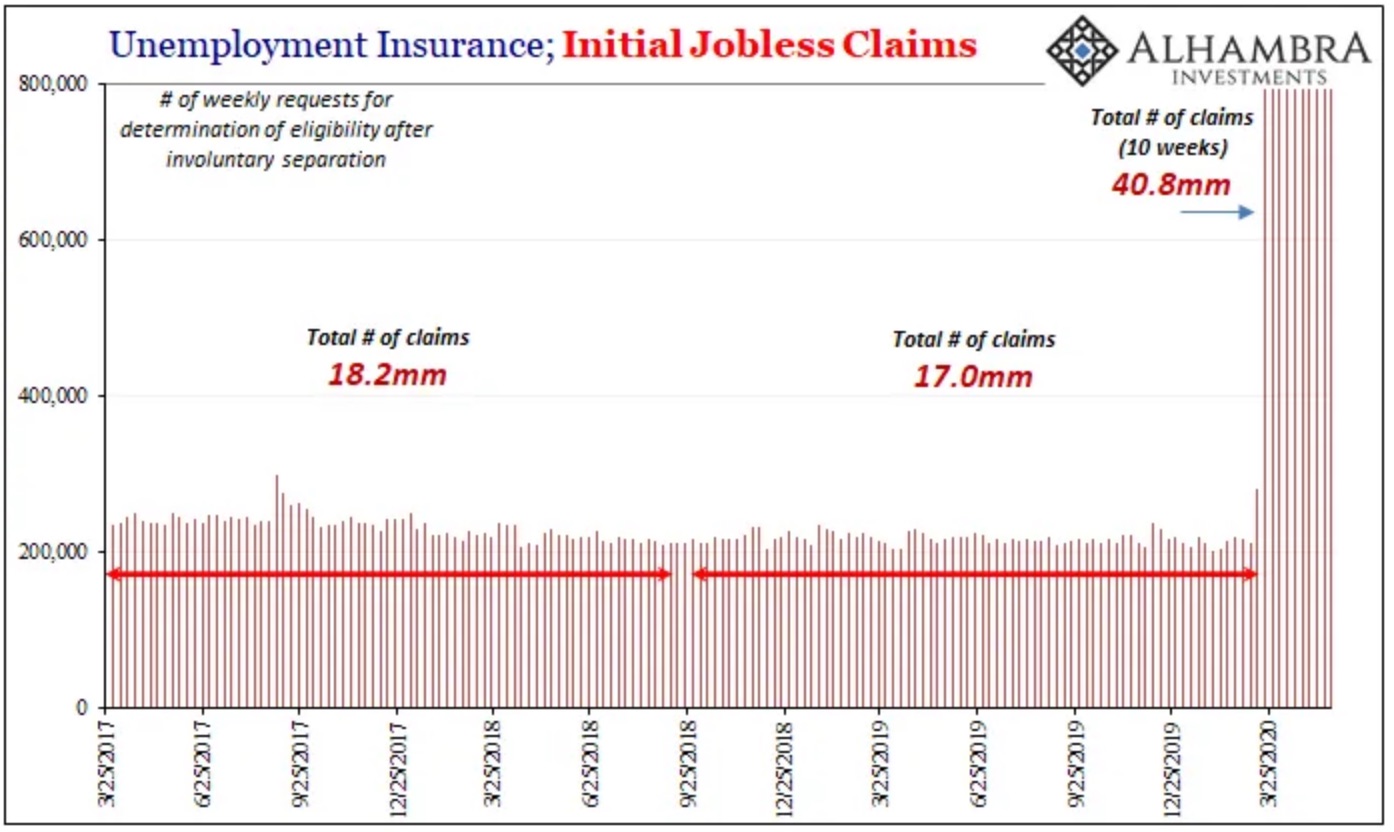 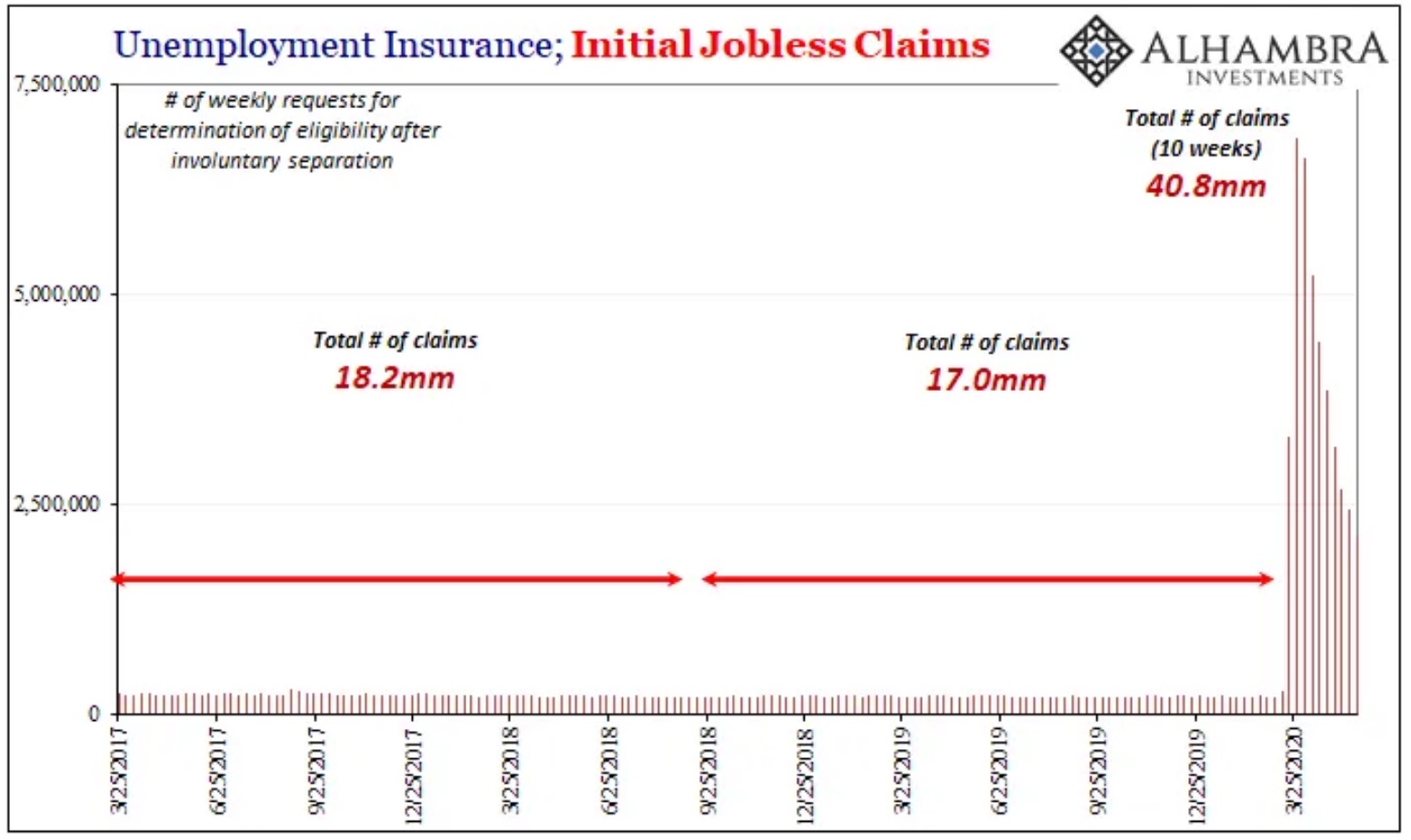 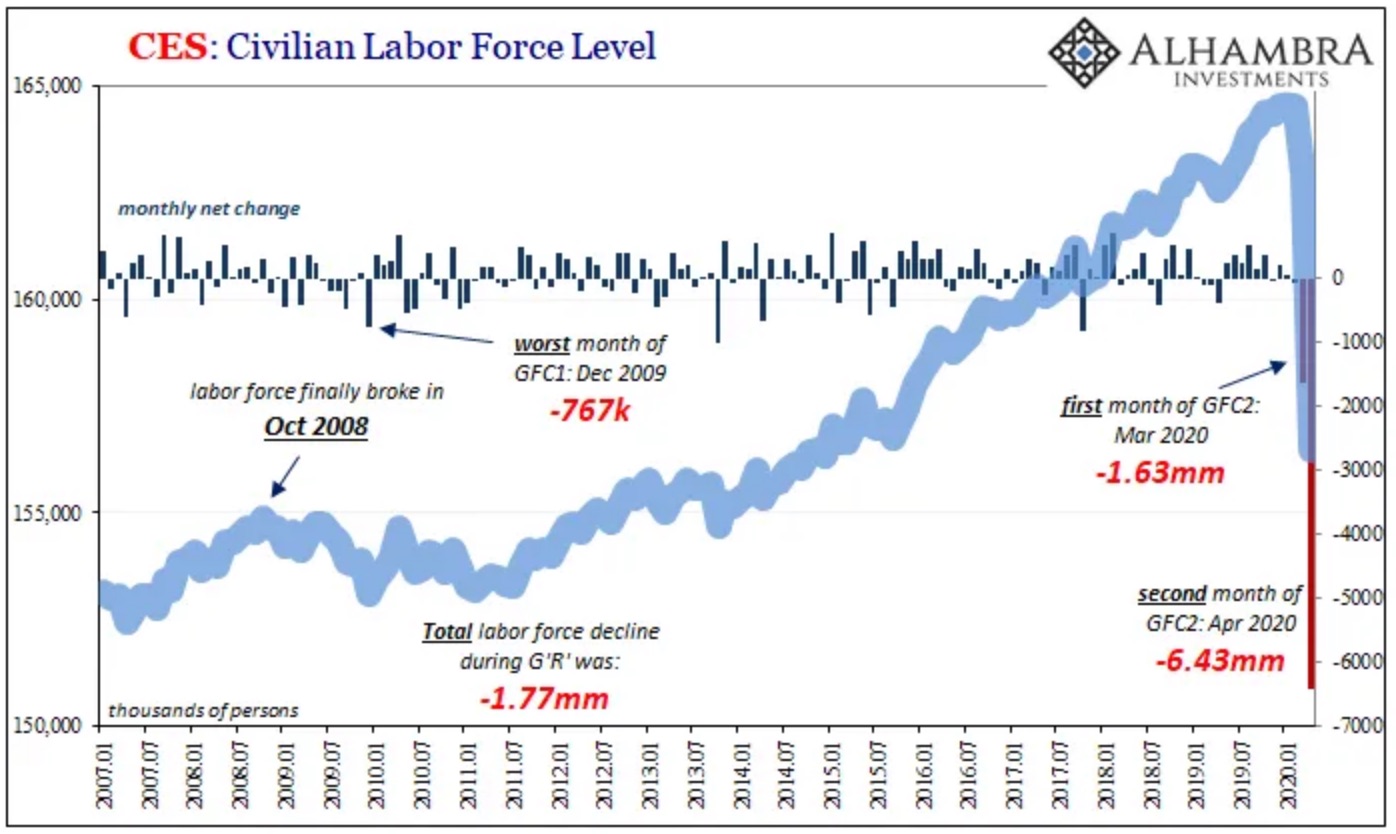 Now the truly shocking turn of events in March 2020, beginning with another prime example of helpless, hopeless, hapless central bankers. Jobless claims keep going, ten weeks now and still more than 2 million. The layoffs haven’t stopped; they’ve not come close to stopping, apparently. That net change of +23 million even had it taken a year and a half like during the Great “Recession” would have represented a massive deflationary wave.

All in ten weeks!

To piece together some answer – beyond the overly simplistic COVID-19, duh – we’ll first turn to JP Morgan’s Jamie Dimon (of all people). Though he likes to opine on interest rates in a way that must please Jay Powell to no end, Dimon’s annual letter to shareholders written last month surely did not.

Companies have already drawn down more than $50 billion of their revolvers to prepare themselves for the crisis (this already dramatically exceeds what happened in the global financial crisis). Many others have requested additional credit, which we have been offering judiciously – more than $25 billion of new credit extensions were approved in the month of March alone. [emphasis added]

Those like McDonalds and Caterpillar who learned something important about the last time, GFC1, they aren’t going to count on the Fed for a “flood” of liquidity this time around.

And it’s the Fed’s data that gives us the systemic scale to this contradictory belief in action. Commercial and Industrial (C&I) loans have absolutely surged, up more than 25% in just two months. The very same two months, of course, as jobless claims. 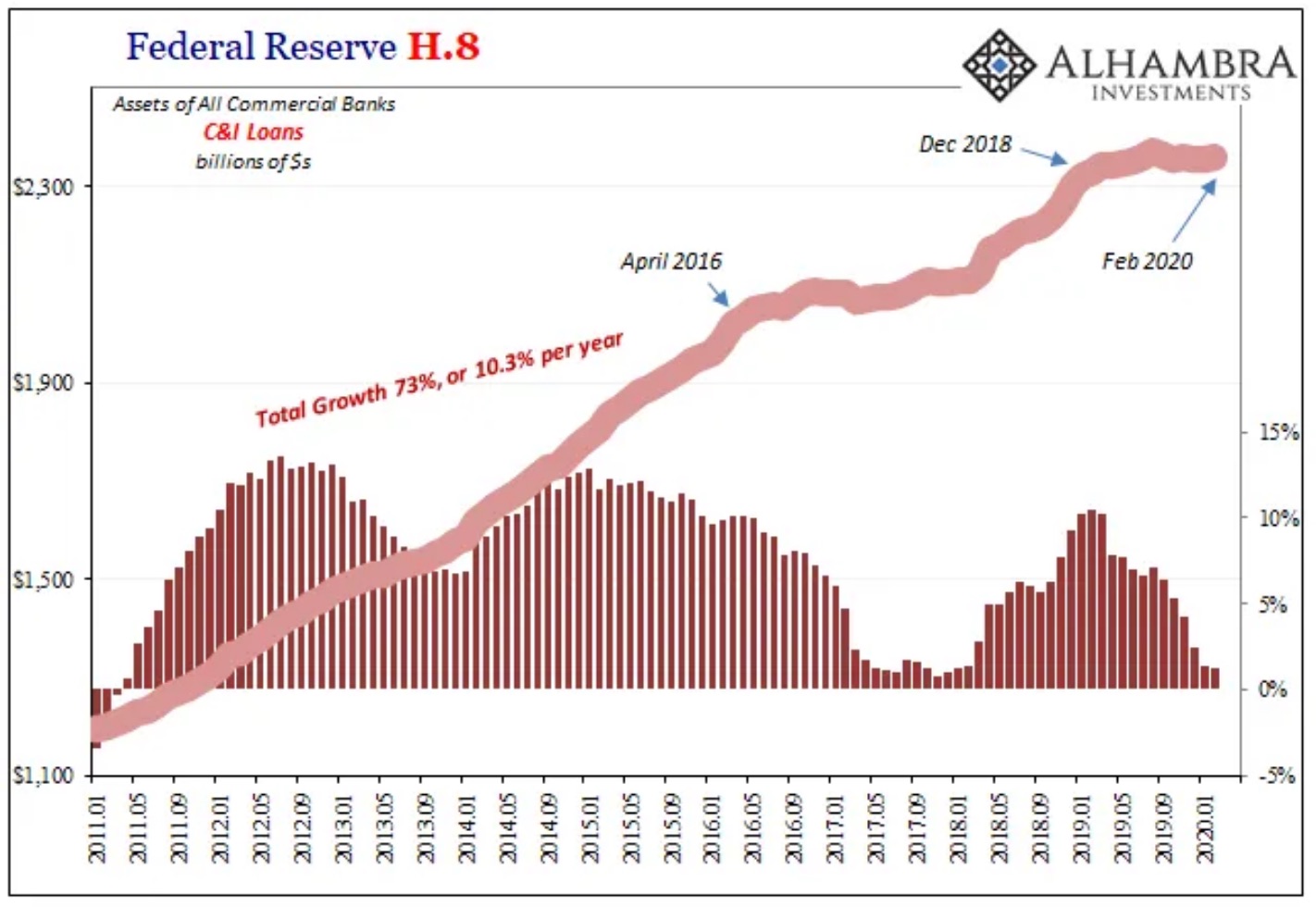 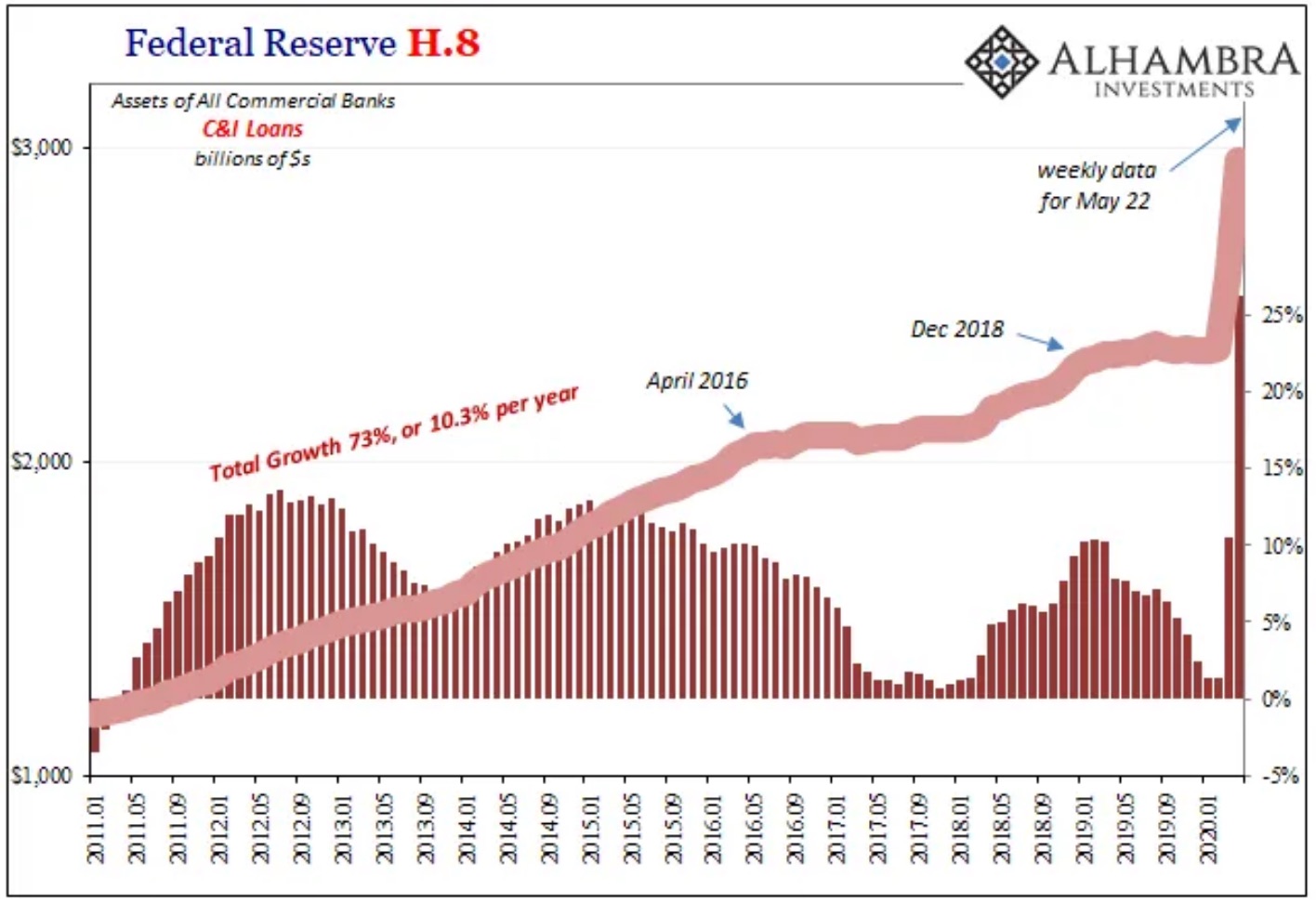 Prior to GFC2, C&I loans had been on the downswing dating back to January 2019 (the late 2018 landmine). Corporate America, it seems, had been in no mood to borrow and invest productively throughout last year, with the balance of this credit actually shrinking modestly from August 2019 up to February 2020. Hardly an indication of the strong economic start to this mess.

March and April, on the contrary, are unprecedented. There’s nothing like this anywhere in the series. Furthermore, it’s continued right on through the end of May (just like jobless claims) in the Fed’s weekly H.8 figures – another $100 billion added in the last four weeks (up to last week).

Corporate managers primed to invest given so much “stimulus?” Absolutely not. The extraordinary actions in drawing cash from revolvers during the Fed’s greatest monetary “flood” in its history is like bond yields a negative reflection against monetary policy.

There’s no money in it, as US (and global) companies know only too well from experience. Repeated experience.

To which the BEA provides more evidence and color. In its updated estimates for Q1 real GDP, revised down to -5.1%, we get our first look at corporate profits during the first quarter, before all this really got started. 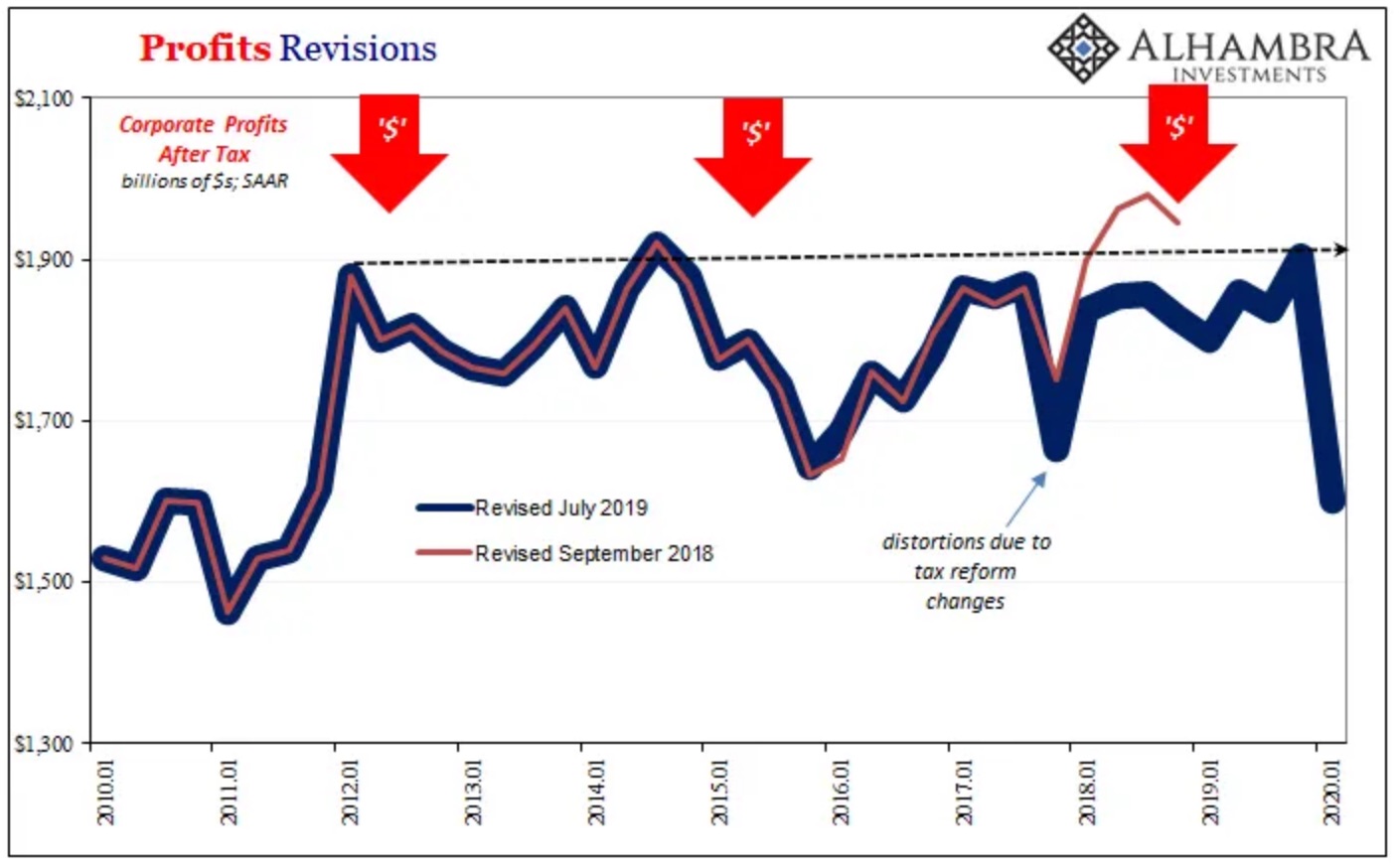 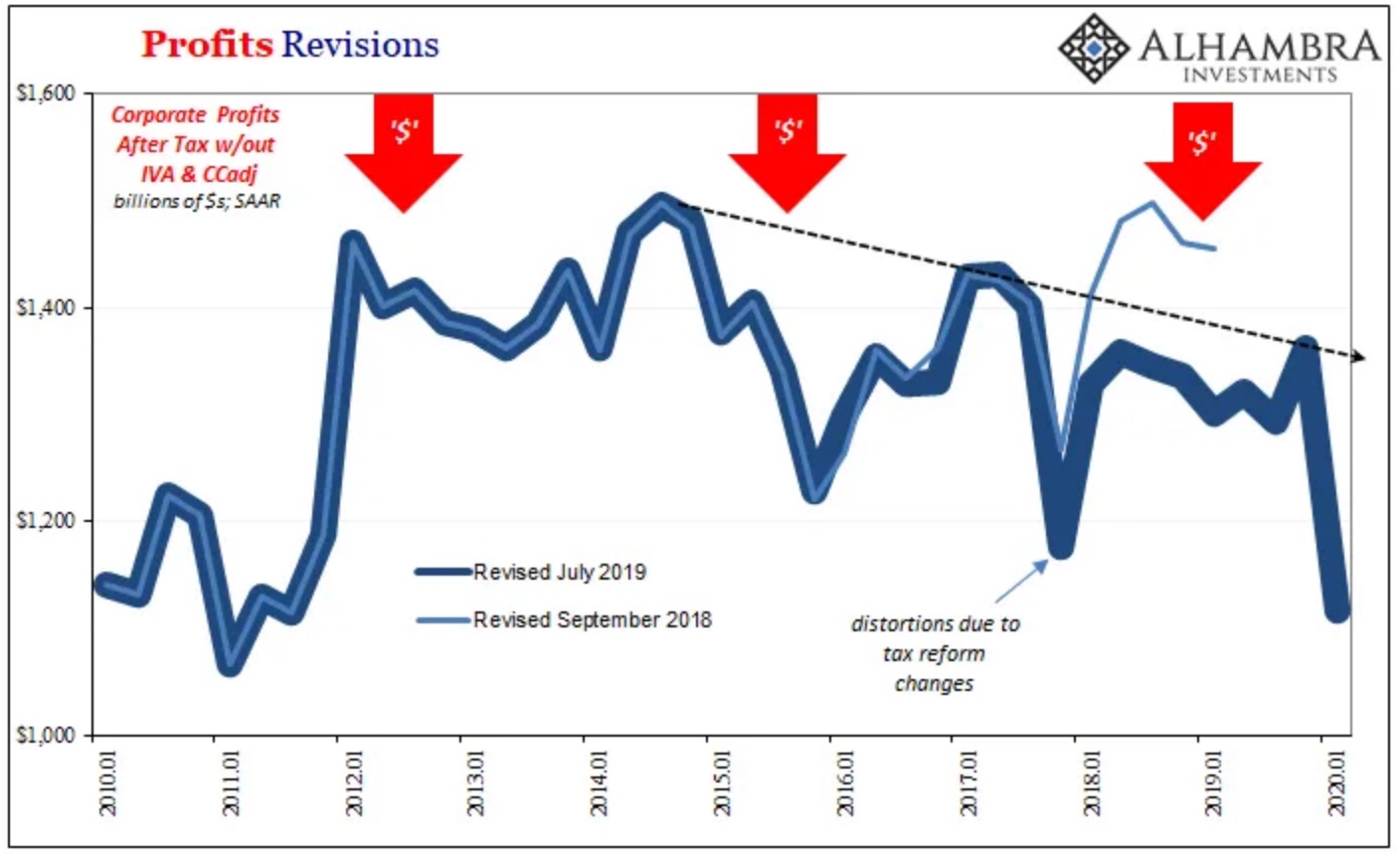 With profits sinking sharply in Q1, that plus liquidity fears (materializing during GFC2 with the same kinds of credit and cash disruptions witnessed a dozen years earlier) have undoubtedly supercharged the negative pressures the COVID-19 shutdowns injected.

The models never saw any of it coming. But, as noted yesterday, they’re now starting to get some sense of it – and it ain’t pretty.

The lingering economic issues won’t be the coronavirus but the liquidity virus. The financial media and those in the financial services industry think of the Fed as being this awesome monetary instrument, effective in whatever it undertakes, while real economy participants see the central bank in a very different way.

Right there’s the net 23.8 million jobless claims and the fact it only took ten weeks for all these separations.

What the mainstream pictures of Jay Powell: 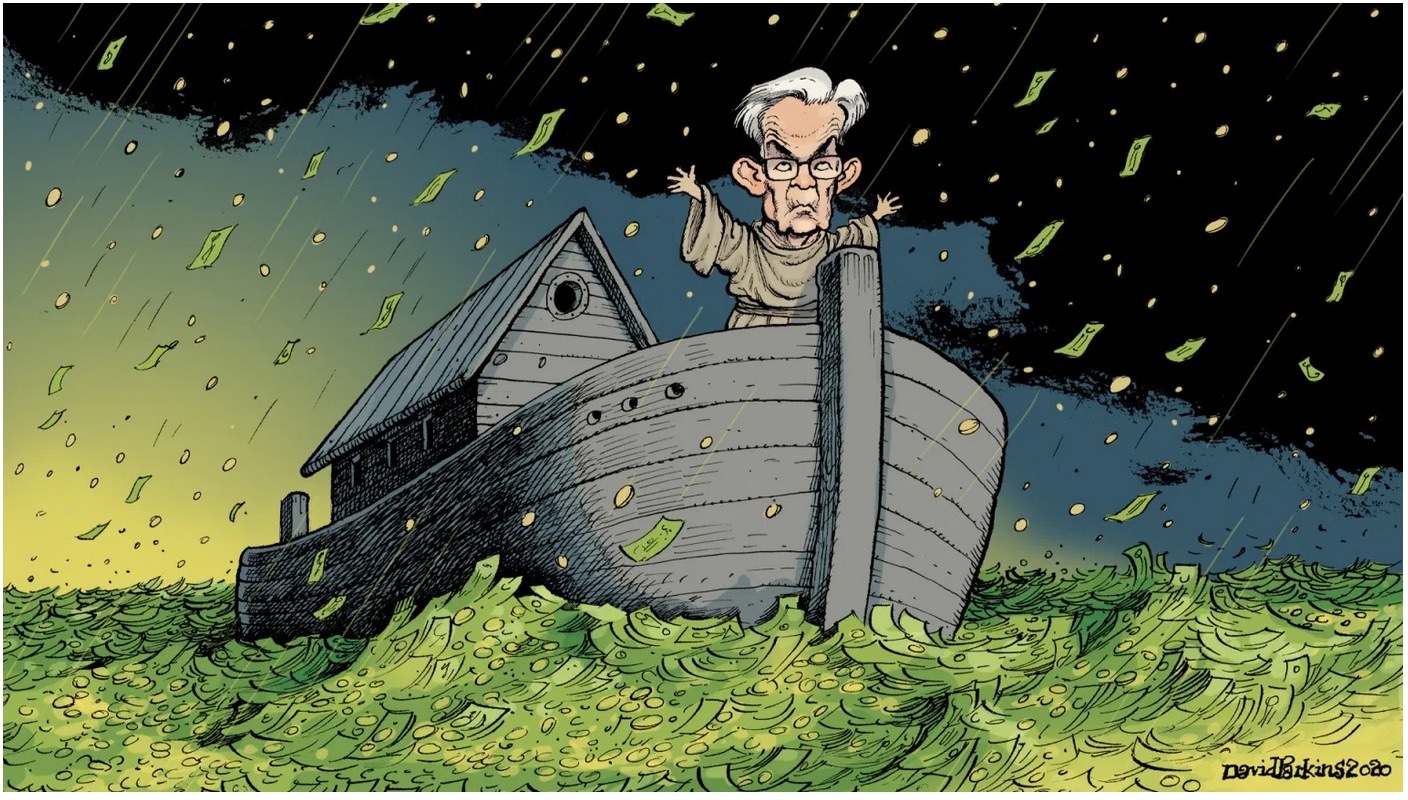 What Jay Powell really is (as real economy participants like banks in the bond market realize): 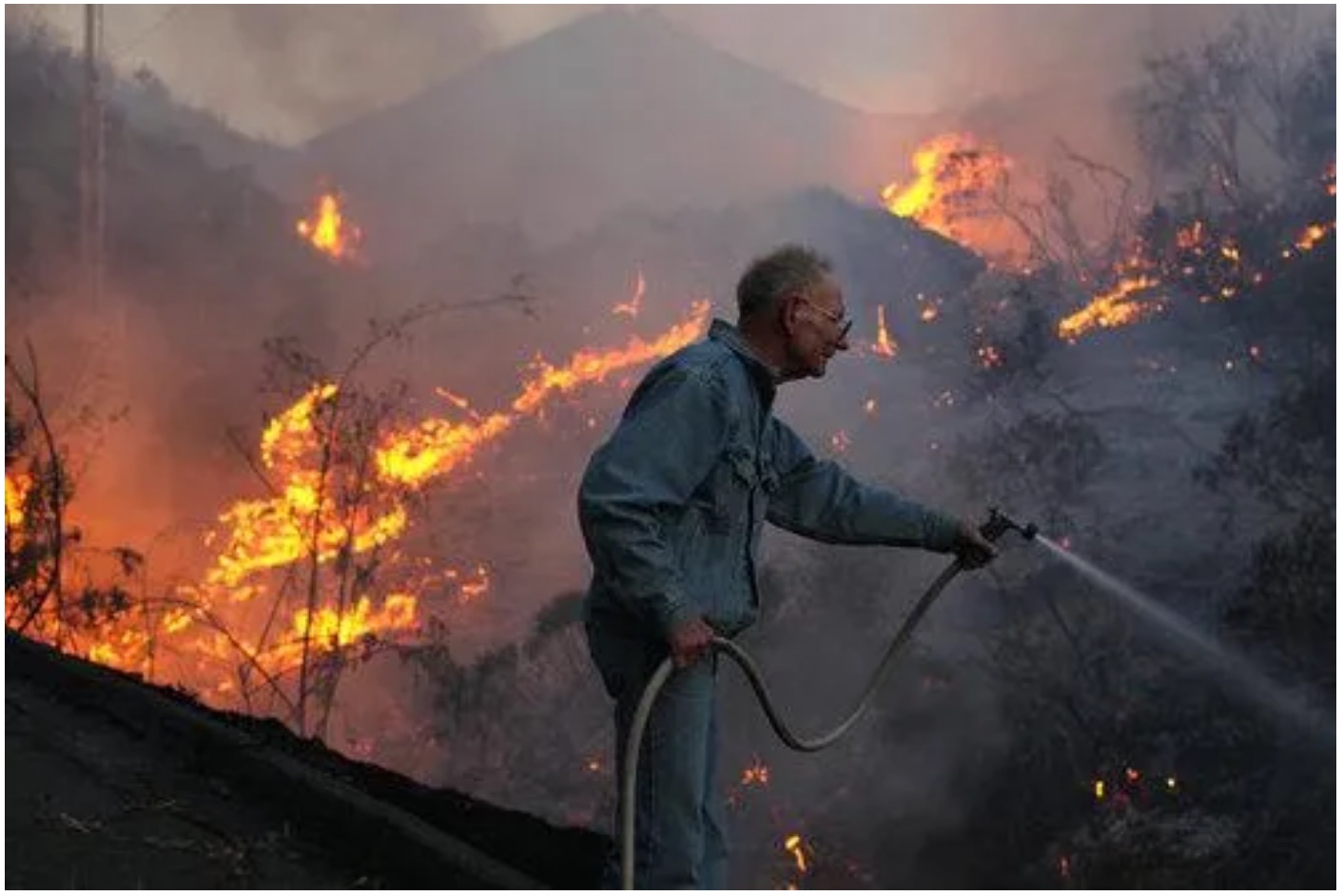