Today the man who has become legendary for his predictions on QE, historic moves in currencies, and major global events warned King World News about a coming storm that will shock the world.

September 11 (King World News) – Egon von Greyerz:  “Eric, we are talking today on the ominous day of 9/11, when a horrible event shocked the world 14 years ago.  Sadly we are now entering a period leading to a calamity of a different kind, and a period which is likely to change the world for a very long time…

“We have come to the end of an era based on credit creation, money printing and manipulation.  It’s also been an era where we have lost many of the moral and ethical values that are necessary for a civilized society.

The upheaval in coming years will not just be financial.  Sadly all areas of life on earth will be affected, be it health, lack of food, water, personal security, social unrest, wars, and much more.  And the social security net that people in the West have been used to will totally disappear.  This safety net has not rested on a firm foundation, but merely on quicksand, consisting of printed money and debt.

And for the few people who have wealth, most of it will disappear in coming years.  It will evaporate quicker than it was generated because most wealth is really only illusory — based on fake pieces of paper that is called ‘money.’  But what people call money today only has an imaginary value that will implode in the next five years.

For many people in the West, the biggest asset is their home.  And people who have bought homes in the last 20 years or so have massive debts.  In the coming asset implosion, all these people will end up with a big debt and major negative equity.  To learn more about how to protect yourself CLICK HERE.

And for investors who hold stocks, we will see the most enormous wealth destruction.  The Dow is already down by 2/3 against gold since 1999 (see chart below). 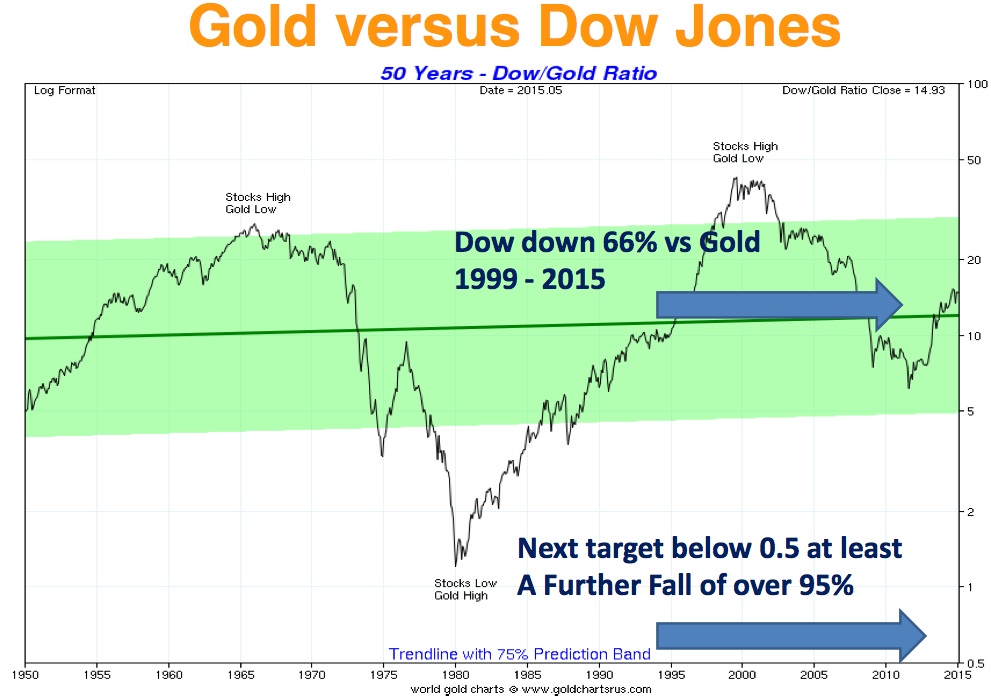 The chart above shows the true inflation-adjusted performance of the Dow, rather than the perceived increase in value, which is mainly due to credit creation.  The Dow will very soon start the next move down against gold.

Eventually I see the Dow/Gold Ratio well below the 1/1 level that it reached in 1980 when the Dow was 850 and gold was 850.  This time I believe that the ratio will overshoot and go below 0.5/1.  That will involve a further fall in the Dow and other stock markets vs gold of 95 percent!

Eric, I hope that investors realize what that means.  They will lose 95 percent of their wealth in real terms.  If they instead hold gold they will not only preserve their purchasing power but actually increase it.

And looking at the gold market, it is now poised for a major move, which will start in 2015.  Looking at the long-term monthly chart, it looks like gold could explode at any time (see chart below).

Both fundamental and technical indicators support a major upside move in the gold market.  We could easily reach a new high above $1,920 in 2015 on its way to $50,000.  And the price of silver could trade over $1,500 an ounce.  But investors must remember that silver is extremely volatile and therefore not for everyone.  But whether investors protect their wealth by holding gold and silver, it must be held in physical form in safe vaults outside of the banking system.

This Is Going To Shock The World

The paper gold market could implode at any time.  At the Comex there are more than 200 ounces of paper gold issued for every once ounce of physical.  When the paper holders ask for delivery there will be no gold available and the Comex will likely default.

In the interbank market it is much worse.  Most banks who sell paper gold have no physical gold at all.  So they have two options — borrow the client’s gold or pay in cash.  And eventually this will be another contributing factor to the collapse of many banks during the coming chaos.” ***KWN has just released the extraordinary audio interview with Nomi Prins, where she discusses the coming financial destruction that is in front of us, what is going to make the price of gold skyrocket, what investors can do to protect themselves and much more by CLICKING HERE OR ON THE IMAGE BELOW.

***ALSO JUST RELEASED: Art Cashin Covers Everything From Major Markets To His Memories Of 9/11 CLICK HERE.