All Roads Now Lead To Gold!

With the price of gold trading near $1,900 and silver at $28, it appears all roads now lead to gold.

Like it or not, the Fed is the market.

Toward this end, we’ve had some substantive fun deciphering the past, current and future implications of “forward guidance” from our openly mis-guided crop of central bankers, most notably Greenspan, Bernanke and Powell.

But let’s not forget Janet Yellen.

As we see below, translating Yellen-speak into blunt speak tells us a heck of a lot about the future.

As in all things economic, the motives and thinking coming out of DC are largely political, which means they are self-serving, partisan and predominantly disastrous.

As for translating Yellen’s political-speak into honest English, the motives for this 2018 warning were two-fold: 1) Yellen and Furman were making a partisan attack on Trump’s then $1T budget proposal, and 2) Yellen actually believed what she said and that the US was indeed careening toward “a debt crisis.”…

In fact, we were already in a debt crisis in 2018, a crisis which has simply risen to much higher orders of magnitude in the three short years since Yellen’s “warning” was made.

Stated otherwise, Yellen will get her debt crisis. It’s ticking right in front of her.

Tracking the Debt Trail
Ironically, the most obvious metrics of the current and ever-expanding debt crisis began just months after Yellen’s infamous Op-Ed.

In October of 2018, FX-hedged Treasuries went negative and Powell’s Fed began buying $60B worth of T-Bills/month without calling the same “QE” despite it being…well QE.

That pesky little debt crisis in 2018 then went parabolic a year later when the repo-spike of September 2019 forced the same Fed to crank out the money printers and once again fatten its increasingly overweight and embarrassing balance sheet. 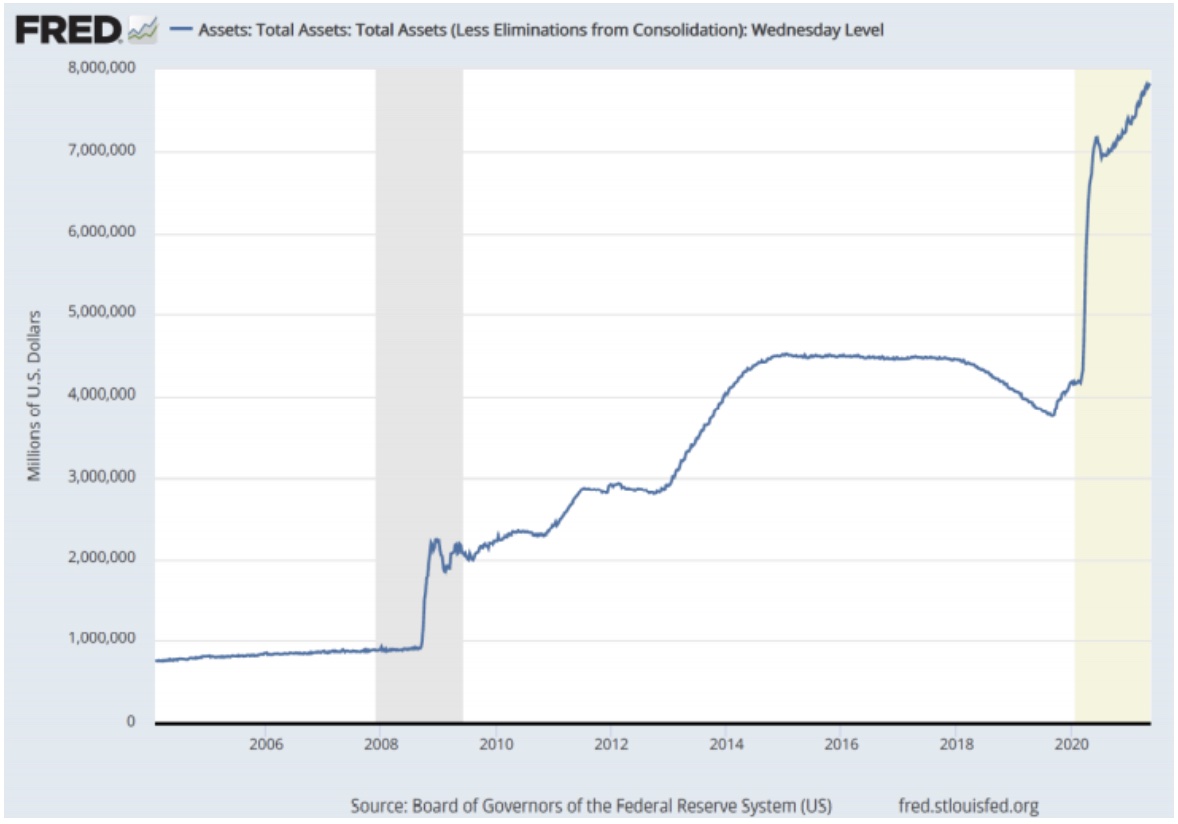 Throughout this period, we consistently reminded investors that some of the best assets in a debt crisis are gold and silver to hedge against the growing and the impending currency debasement.

I also wrote that the volatility (VIX) trade, for those who know how to do it, would be effective in addressing the market volatility that always follows the political volatility (i.e., mistakes) which policy makers create/make in a debt crisis.

Speaking of gold and volatility, history reminds us of the kind of volatility that can occur in a sovereign debt crisis, with Weimar being the most obvious example that no one, to their detriment, thinks is repeatable: 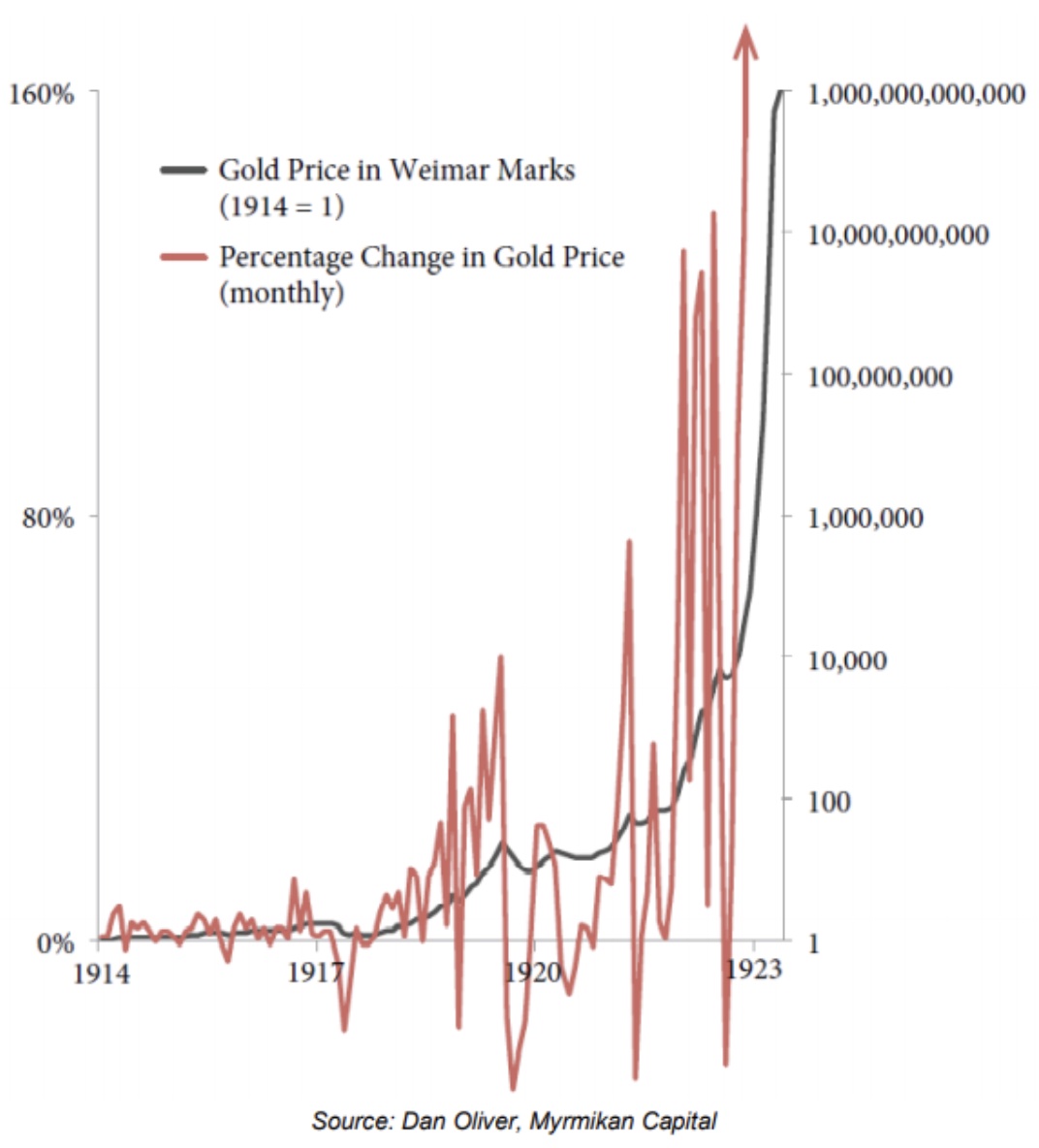 Translating Yellen Is Getting Quite Simple: Inflation Ahead
Looking forward, translating Yellen’s political-speak (as opposed to her former Fed-speak) is actually getting quite simple.

This year, she’s already confessed that she believes “we must re-orient our framing of fiscal policy.”

In plain English, that just means we can expect a lot more deficit spending to come from the Biden-Yellen tag-team in DC.

But this time, there’s an interesting twist to the nature and target of that spending, namely, there’s going to be trillions more of it, but it’s heading toward Main Street’s middle class not Wall Street’s upper class. 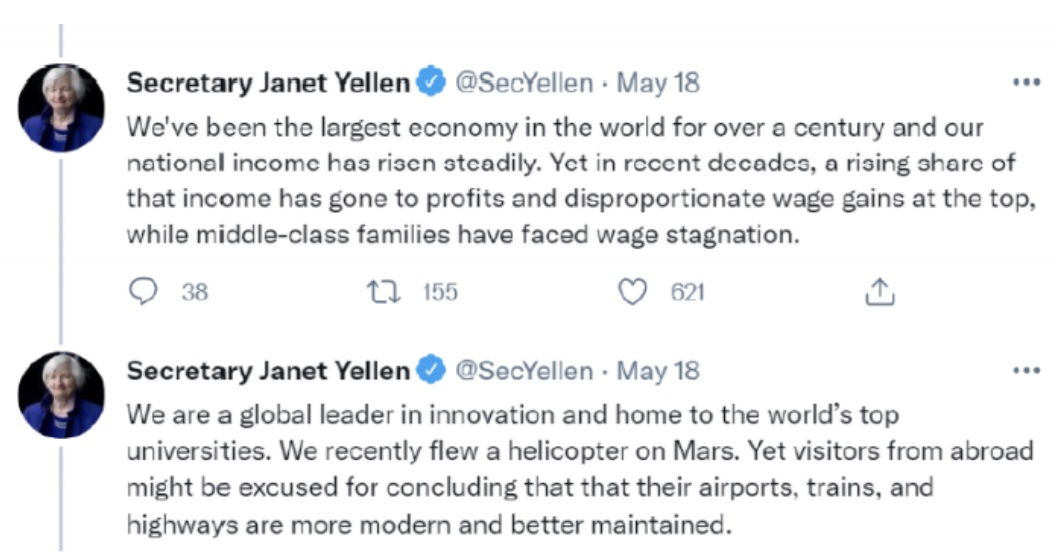 We know, for example, that fiscal policy (however spent and wherever directed) will have a far greater impact on inflation than just more monetary policy alone.

Extreme fiscal (deficit) spending under the “New Deal-like” Biden-Yellen administration is already multi-trillion in nature, and will continue to be as such going forward.

Debt as a Growth Policy?
Needless to say, “debt as a growth policy” is an oxymoron. Once national debt to GDP ratios cross the 100% Rubicon, growth is mathematically stifled.

Does Yellen grasp this simple truth?

Like Yellen, I took basic math at Brown University, but I’m surprised to infer that perhaps she’s forgotten such classwork.

Did Yellen combine her math courses with some intro to mythical studies or fiction writing seminars?

Or maybe she snuck over to the RISD campus and gained sone class credits in magic classes, for when there’s more debt than dollars to pay it, she somehow feels that she can always return to her familiar money printer at the Eccles Building and magically create more and increasingly debased dollars to service the same.

So, what’s a former Fed Chair and current political Treasury Secretary like Yellen to do in a world of delusion?

The New Bretton Woods
With all the politico charm of a cozy bed-time story for America, Yellen is already telegraphing her next move with a warm and fuzzy nostalgia to the by-gone days of the 1940’s and the world’s needed response to the horrors of World War 2 (no comparison at all to the fear-porn era of the COVID horrors)—namely Bretton Woods. 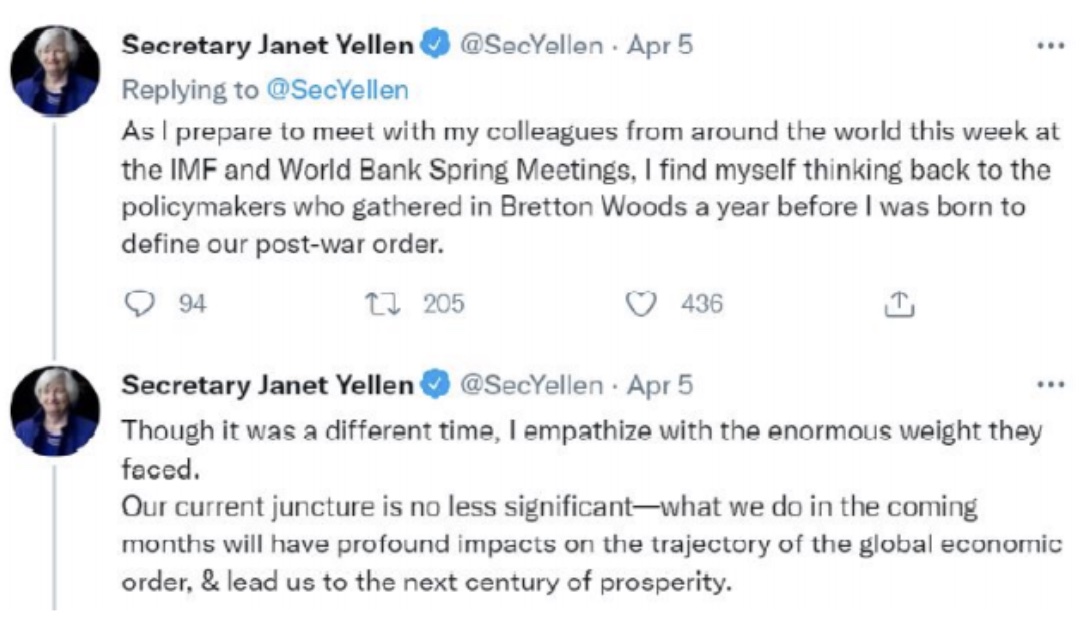 For those who forgot, the Bretton Woods meeting of 1944 is when America’s then gold-backed dollar became the new global currency given Uncle Sam’s military leadership and relative economic strength over the war-ravaged economies of Asia and Europe.

Well, Yellen is now thinking about a “New Bretton Woods” with her equally delusional, political and hence-self-serving cronies at the IMF.

She described these IMF get-togethers “as no less significant than the Bretton Woods meetings in 1944.”

That too is rich…

Translated into honest English, Yellen et al are trying to compare the death rate and economic destruction of the COVID crisis (made more so by policy reactions than daily viral threats) to the unimaginable economic, political and social horrors of the Second World War in which 85 million people perished and national economies simply vanished in the rubble.

That’s real horror, as any of us who know the survivors and victims of that period can attest.

Today, policy makers are trying to compare (or propagandize) the admittedly scary years of the COVID crisis (and its tragic 3.75M death toll) to the far more nightmarish and frankly unimaginable period of 1939-45 suffering and carnage.

In essence, the absolutely reckless authors of the biggest debt crisis in the history of the world PRE-COVID are now using this media-fired and politically-charged global flu as both the cause of, and pretext for, even more debt—all to be paid for with even more fake, fiat dollars.

Rather than create currencies out of thin air, the new global “leadership” and their private banking/independent policy makers at the debt-guilty IMF are going to create digital fake money out of thin air…

In short, more debt binges ahead, all likely to be paid for with more fake money ahead—but with far more digital CBDC panache.

Same Ol’ Same Ol’
Ultimately, however, what Yellen and the IMF Wunderkinder are proposing boils down to a distinction without a difference.

In short, their plan is nothing more than the same ol’ delusional, irresponsible and self-serving fantasy that a debt crisis can be solved with more debt.

So, what can we expect in the near-term in this backdrop of the absurd?

First, the direction ahead for Yellen is just as we’ve expected and warned, namely a weak USD policy to help soften the damage of a debt crisis (which she helped create) with increasingly inflated (over-created) and hence debased U.S. dollars.

Powell has so much as confessed to this policy of higher inflation “allowance” (as opposed to “targeting”) for the simple reason that inflation helps sovereigns like Uncle Sam dig out of debt holes created by current and prior “leadership” at the Fed and White House—debt holes which they conveniently blame on COVID.

Secondly, we are seeing the slow move away from the USD’s “reserve status” as structured since Nixon welched “temporarily” in 1971 on the very gold standard created at Bretton Woods in 1944. That, however, will take years, not weeks.

Given the foregoing, we repeat our conviction that the current inflationary cycle, despite Fed-speak to the contrary, is going to be anything but “transitory.”

Inflation, Repressed Rates and More Currency Debasement Ahead
Given the foregoing and now undeniable debt crisis and openly telegraphed-changes to come (viz: inflation, currency debasement and artificial yield repression), the foreseeable future is plain to see for any who have eyes to see it.

As for rates and debt, former IMF Chief Economist, Olivier Blanchard, is as “insider” as insiders can get, and he’s no fool when it comes to bailing out his own past mistakes.

If debt is too high, then he knows it’s essential to keep the cost of that debt (interest rates) artificially stapled to the floor. 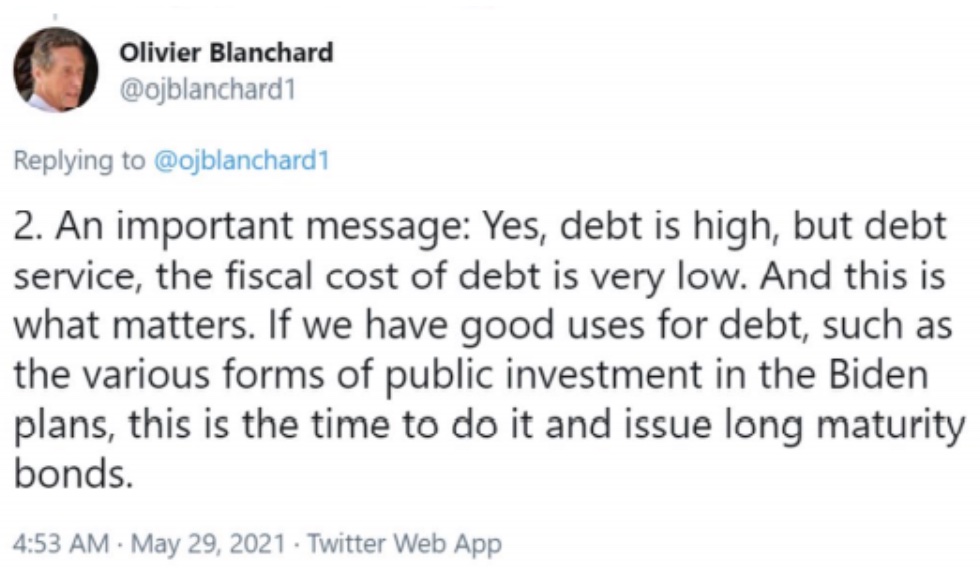 All Roads Lead to Gold
So, there you have it, straight from the horses’ mouths: Rising inflation and lowering bond yields—the ideal setting for gold in the years ahead.

Frankly, and sadly, bonds will be of little help in this new “ab-ormal.” The grossly over-bought and grossly distorted (inflated) credit markets just aren’t the bonds our fathers and grandfathers bought for safety, yield or hedging.

Gold, however, accomplishes, hedging, safety and appreciation with far greater consistency than bonds. 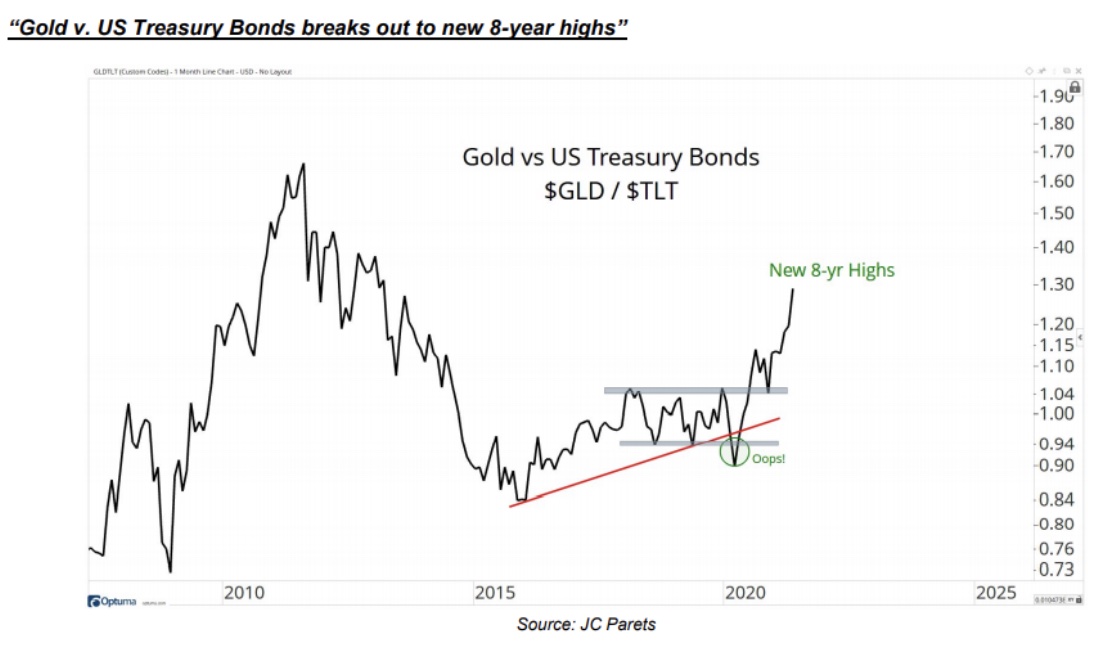 Without exaggeration or echo-chamber bias, we stick to our conviction that all roads, policies and discussions turn back to physical gold and silver.

Again, and in short, the present is obvious: A Debt crisis beyond reason. And without precedent.

The Dollar’s Future
Given the harsh reality of our harsh debt crisis, the US is so thoroughly saturated in debt levels of its own making that equally grotesque levels of future spending will be the norm at the open and obvious expense of the currency.

This would explain why Russia plans to cut the USD holdings in its wealth fund to zero in favor of more euro’s and, you guessed it: Gold.

The harsh reality of harsh debt makes the path forward fairly predictable, to the extent anything is predictable.

The Cost of De-Levering
History confirms that when nations get too far (waaayyyyy tooooo far) over their skis in debt, the only way to get their debt-to-GDP levels below the deadly 100% marker (130% for the US today) is to “de-lever” their bloated balance sheet over a 5-10-year horizon.

Such deleveraging would require high-teens GDP growth acceleration against a US debt growth rate of 8.75% CAGR.

In our mind, the Yellen-telegraphed policy of “serial stimulus” ahead to achieve such growth and de-leveraging will likely be inflationary.

In such a tragic yet openly telegraphed setting, gold is prepared.

Are you?…This will link you directly to more fantastic articles from Egon von Greyerz and Matt Piepenburg CLICK HERE.

***To listen to one of the great veterans in the business discuss gold, silver, how to invest in the coming inflation, and much more CLICK HERE OR ON THE IMAGE BELOW.

***To hear Alasdair Macleod discuss the impact of the coming Basel III regulations on bullion banks and what the banks are up to right now CLICK HERE OR ON THE IMAGE BELOW.