With markets heating up around the globe, here are some very important words from Jim Grant.

Art Cashin, Jim Grant, Peter Boockvar
May 16 (King World News) – Note from legend Art Cashin, including quotes from Jim Grant and Peter Boockvar:  Some Less Than Readily Visible Inflationary Pressures – One of the areas seeing rising costs and prices is shipping, especially trucking. Here’s some of what my friend, Peter Boockvar, over at Bleakley Advisory wrote on the topic this morning.

I’ve spoken for a while about rising trucking costs and what that will eventually mean for consumer prices on every single item that gets trucked. At least on the former it is becoming obvious everywhere and many companies talked about it on their recent earnings conference calls. In yesterday’s Case Freight Index report it was titled “Volume Strong, Pricing Even Stronger – Capacity Still Tight but Less Tight.” On the latter though, “That said, demand is still exceeding capacity in most modes by a significant amount. In turn, pricing power has erupted in those modes to levels that spark overall inflationary concerns in the broader economy.” 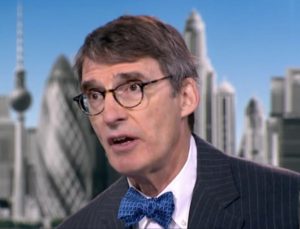 In yesterday’s Almost Daily Grant’s, Jim Grant talked about rising trucking costs and took some quotes from the biweekly Morgan Stanley Truckload Index: “Flatbed capacity is exceedingly tight and will likely tighten further as milder weather finally arrives in northern regions. There seems to be very large imbalances regionally; creating ‘panic’ freight buying” according to one anonymous shipper. The CFO with Melton Truck Lines said “We have not seen a rate environment like this for a long, long time, if ever.” The CEO of Brenny Transportation said “I’ve never seen anything like this in more than 30 years in business. Volume was at least manageable a year ago. We were doing well and rates were good. But now it’s out of control and we can’t keep up.” She went on to say that last year shippers waited 3 days to get a truck and now are waiting 10-14 days.

As a result of this and other factors (oil, etc…), the 10 yr inflation breakeven yesterday closed at 2.19%, the most since August 2014 and certainly helps to explain rising interest rates. On the inflation equation, we’ve had 2.5-3% services inflation ex energy for years. What has been the offset was a decline in goods prices. Now we will see a rise in goods prices at the same time service inflation remains at the same level.

That may not just put pressure on the final cost of goods, it may squeeze profit margins.

Overnight And Overseas – Asian equity markets saw generally modest pullbacks across the board, in seeming reaction to yesterday’s weakness in New York. Some signs of economic slowing in Japan may also have been a factor.

Stocks in Europe are mixed with mostly fractional moves so far.

Among other assets, Bitcoin is weaker, now trading just below $8400. Gold is little changed after Tuesday’s punishing selloff that took it below the 200 day moving average for the first time in quite a while. Crude is a bit lower on some confusing inventory data after the bell. The dollar is stronger and yields are down a tick or two.

Consensus – Bulls should try to regroup and hold these levels in order to prevent a more significant pullback.

Trade talks with China will continue into the weekend but headlines are unlikely until talks are over.

King World News note:  All of these inflation pressures being noted by Jim Grant, Art Cashin and Peter Boockvar will be incredibly bullish for gold and silver over the medium- to long-term.  For those of you who may be frustrated with the action in the metals, just remember that bull markets are supposed to shake out weak hands through this type of trading action.  Stay strong and continue accumulating physical gold and silver as well as the high-quality companies that mine the metals.