As we approach September, these major catalysts will cause the gold price to explode higher.

Sprott Precious Metals Watch!
By Trey Reik, Senior Portfolio Manager, Sprott USA
August 24 (King World News) – Is the Fed Done (Tightening) for this Cycle?
Spot gold has spent the past seven months in a tight trading range between $1,200 and $1,300 per ounce. Given the stored force inherent in such a trading pattern (Figure 1, below), history suggests a breakout, whether up or down, is likely to be characterized by steep slope.  The question remains, which direction will gold follow?  Given that a prominent macroeconomic development during the past several months has been perceived central-bank hawkishness, consensus appears to favor pending gold-price pressure.  On the other hand, spot gold is now flirting with the $1,300 upward-trading-bound for the third time in five months. We command no clairvoyance about future gold prices, but we offer in this note a few observations suggesting current market positioning may be significantly offside in a number of asset classes, including gold.  Out of respect for August schedules, we will skew our comments toward visual exhibits. 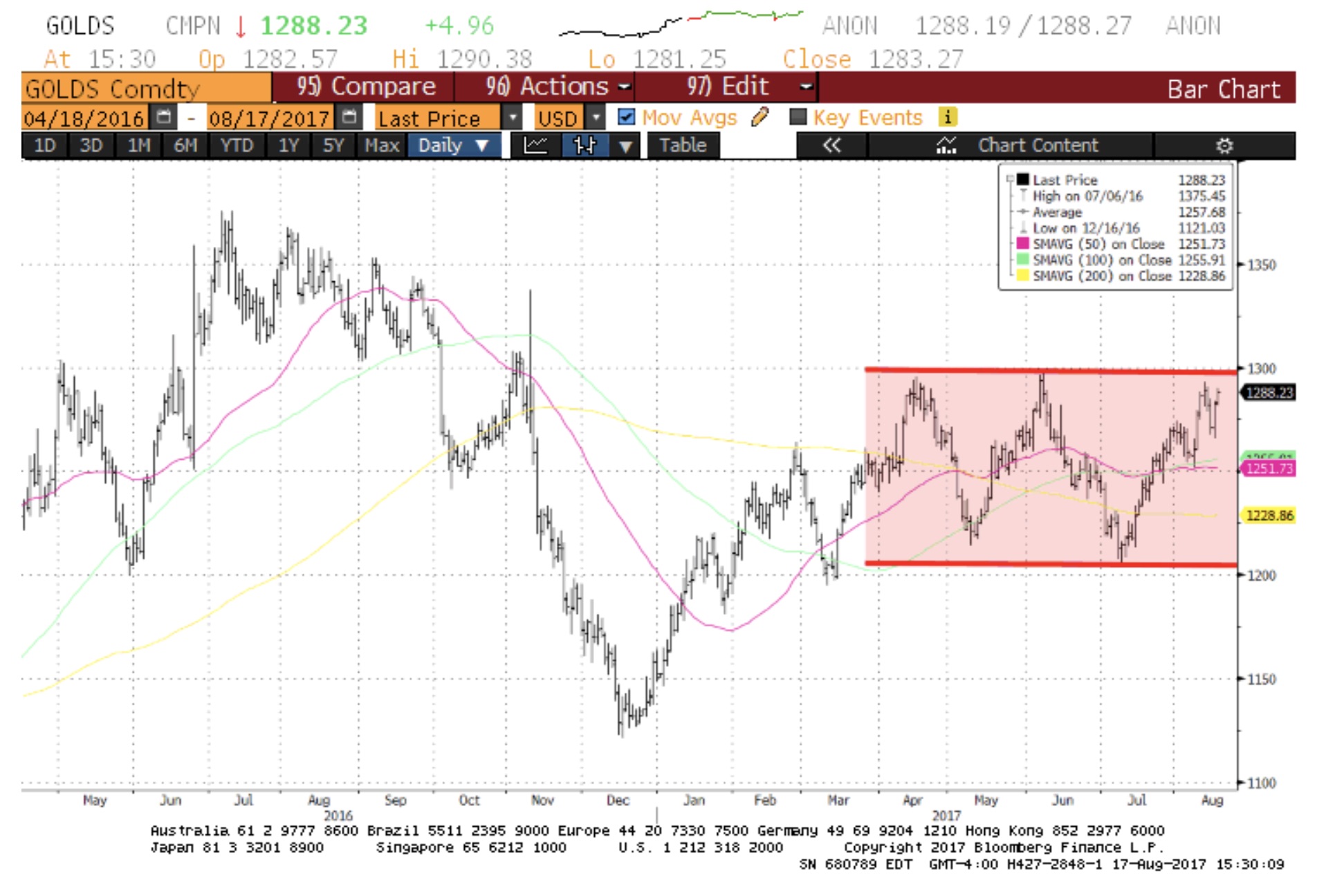 First-up, what is driving current equity market ebullience?  In the context of uninspiring economic statistics, we would suggest a significant force powering stocks has been unprecedented central bank asset purchases during 2017.  Since the Fed’s final taper in October 2014, there has been a common misconception that global QE has been winding down.  As shown in Figure 2, below, nothing could be further from the truth.  In fact, aggregate asset purchases by the Bank of Japan (BOJ) and European Central Bank (ECB) during the past two years have dwarfed prior rates of Fed QE.  Separately, Bank of America’s Michael Hartnett calculates that the BOJ, ECB, Swiss National Bank (SNB) and Bank of England (BOE) purchased $1.5 trillion of assets during the first five months of 2017, or at an annualized rate of $3.6 trillion, far exceeding any historic rate of global QE.  Our concern is that reigning confidence among equity investors seriously underestimates the vulnerability of asset markets to any incremental central bank tightening. 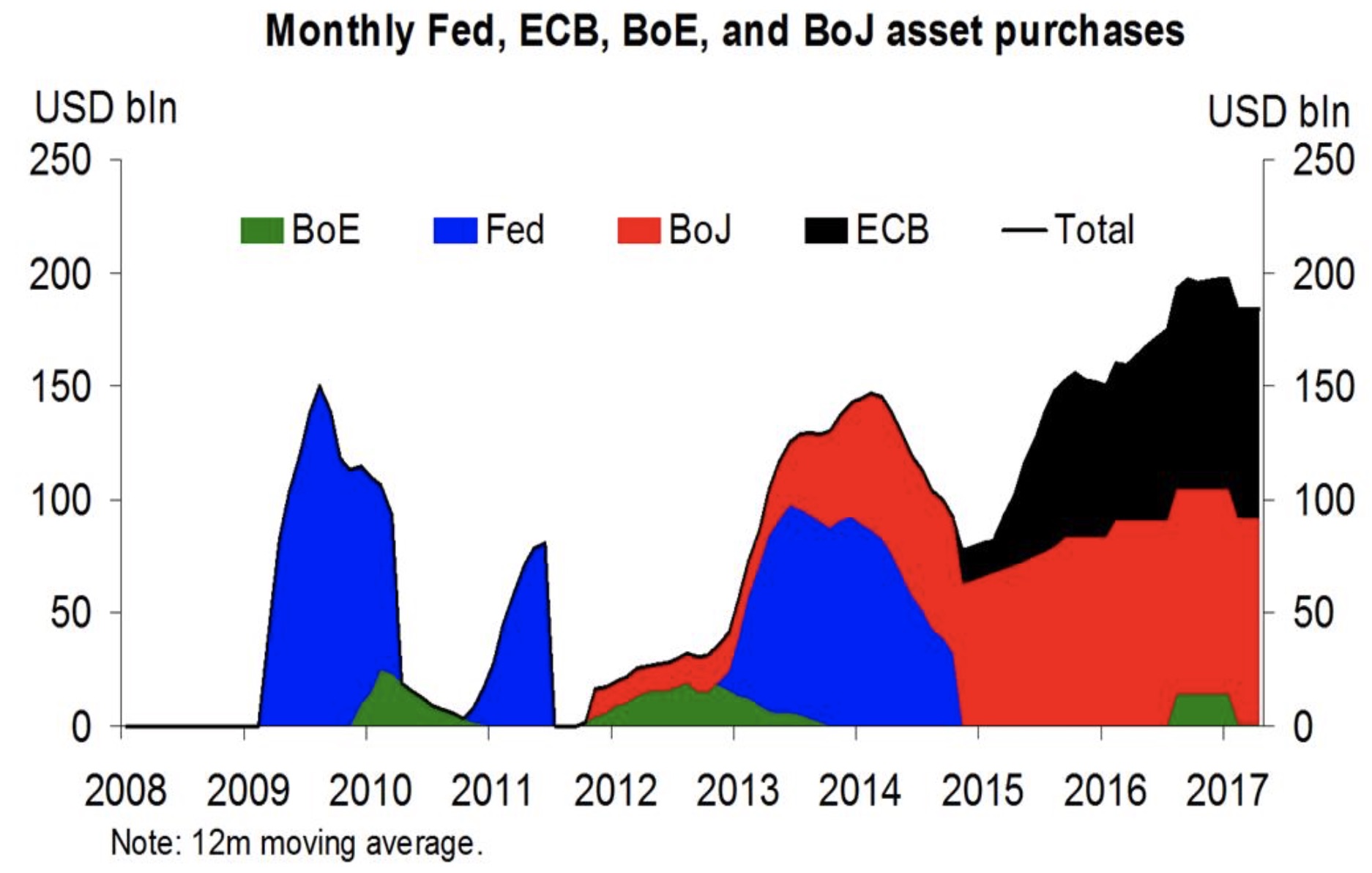 In recent weeks, we have even noted resurgent espousal of the perpetual-bull-market hypothesis from various commentators in the financial media.  In the “what could possibly go wrong” category, we would site the dramatic decoupling since mid-March of soaring equity averages from souring U.S. economic performance.   In Figure 3, below, we plot the S&P 500 Index versus the Citi Economic Surprise Index (which aggregates sequential beats-and-misses-versus-estimates for prominent U.S. economic statistics).  Riding surges in post-election sentiment and soft economic data, the Citi Index mirrored the ascent of the S&P 500 Index through the spring.  Since mid-March, however, the realities of hard economic statistics have weighed heavily on the Citi Index while the S&P 500 Index has advanced unfazed.  Something has to give. 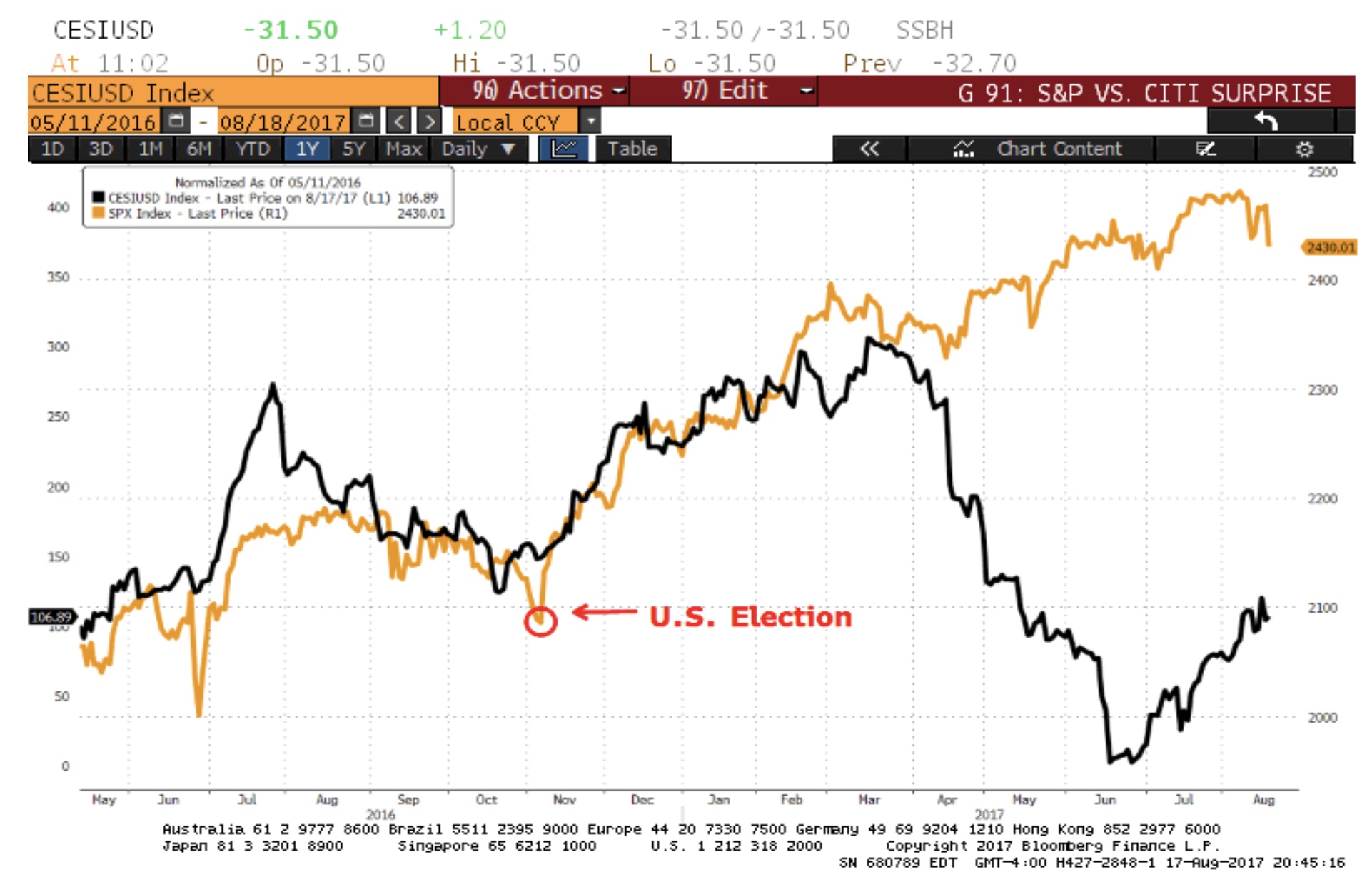 Another market dynamic worthy of reflection has been investors’ face-value acceptance of the Fed’s telegraphing of three-or-so rate increases in each of the next few years.  We plot in Figure 4, below, midpoint FOMC dot-plot projections for fed-funds-rates at every FOMC (projection) meeting since January 2012.  Below the cavalcade of skyward pyrotechnics rests the horizontal realities of FOMC rate movements.  We would query, exactly what has changed in the economic landscape to suggest the Fed can now raise rates when they have felt unable to do so in the past? 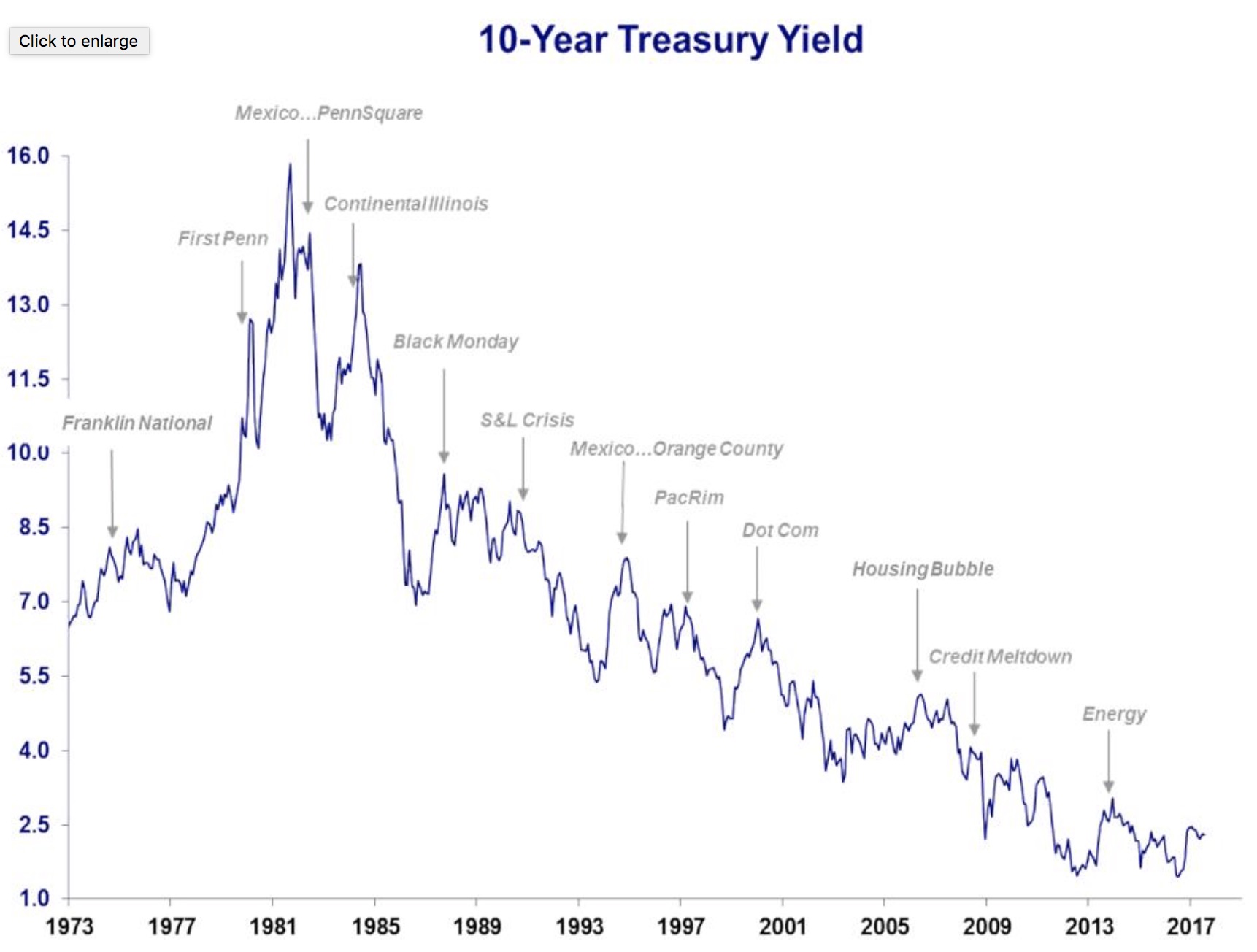 Pulling this all together, equities continue to set new highs while investors ratchet up expectations for Fed tightening, all against a backdrop of deteriorating U.S. economic performance.  Amid this unequivocal optimism, we offer a contrary precis of developing fundamentals.  We believe recent FOMC rate hikes have already begun to crimp a debt-addled and growth-starved U.S. economy…

In the context of outstanding debt levels, the Fed is already too tight, and we suspect Fed “tightening” for this cycle has largely concluded.  If we are correct in our significantly non-consensus analysis, many financial assets are likely to be repriced aggressively in coming months, to gold’s tangible benefit.

Our longtime study of U.S. debt levels has convinced us of one incontrovertible relationship:  the U.S. economy cannot bear rising interest rates, on either the long or short end, without an immediate surge in financial stress.  This past spring, Trump optimism and the Fed’s more hawkish tilt began to steepen global rate structures.  We wrote at the time that the 35-year history of 10-year Treasury yields has demonstrated that any backup in 10-year yields has inevitably catalyzed a crisis (Figure 5, below).  We predicted 10-year Treasury yields could not sustain their post-election rally, and, indeed, they have not.  With debt levels now considerably higher than financial-crisis peaks, why would any investor believe rates can rise without inflicting widespread financial damage? 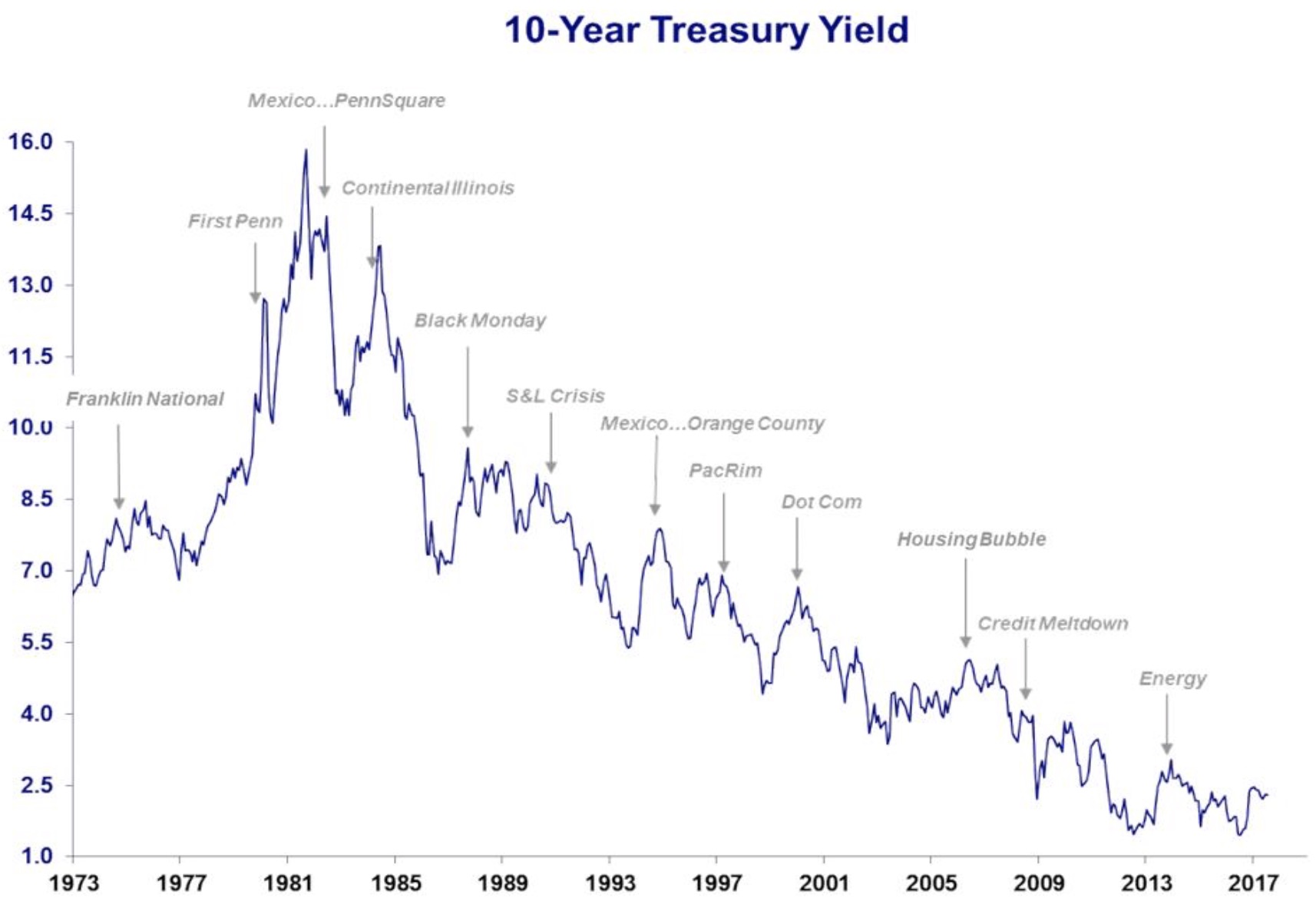 With respect to gold’s prospects during the next six-to-twelve months, we believe the single greatest catalyst will be consensus recognition that the Fed cannot truly tighten without significant harm to global financial conditions.  We would suggest two critical variables will provide the strongest clues to future FOMC policy:  inflation statistics and commercial-bank lending trends. With respect to inflation, CPI measures have now posted five straight months of shortfalls to consensus estimates, a very rare sequence.  July CPI core statistics marked the weakest 6-month performance since August 2010.  The Fed’s preferred PCE-measure registered 1.4% in June, a far cry from its stated 2% objective.  We view recent Fed jawboning about temporary factors restraining inflation as little more than tacit admission of the Fed’s ebbing confidence in their own policy decisions.  As usual, Saint Louis Fed President James Bullard pushed the jawboning envelope (8/7/17), “It is hard to find good explanations for the low-inflation era being experienced by the U.S.” 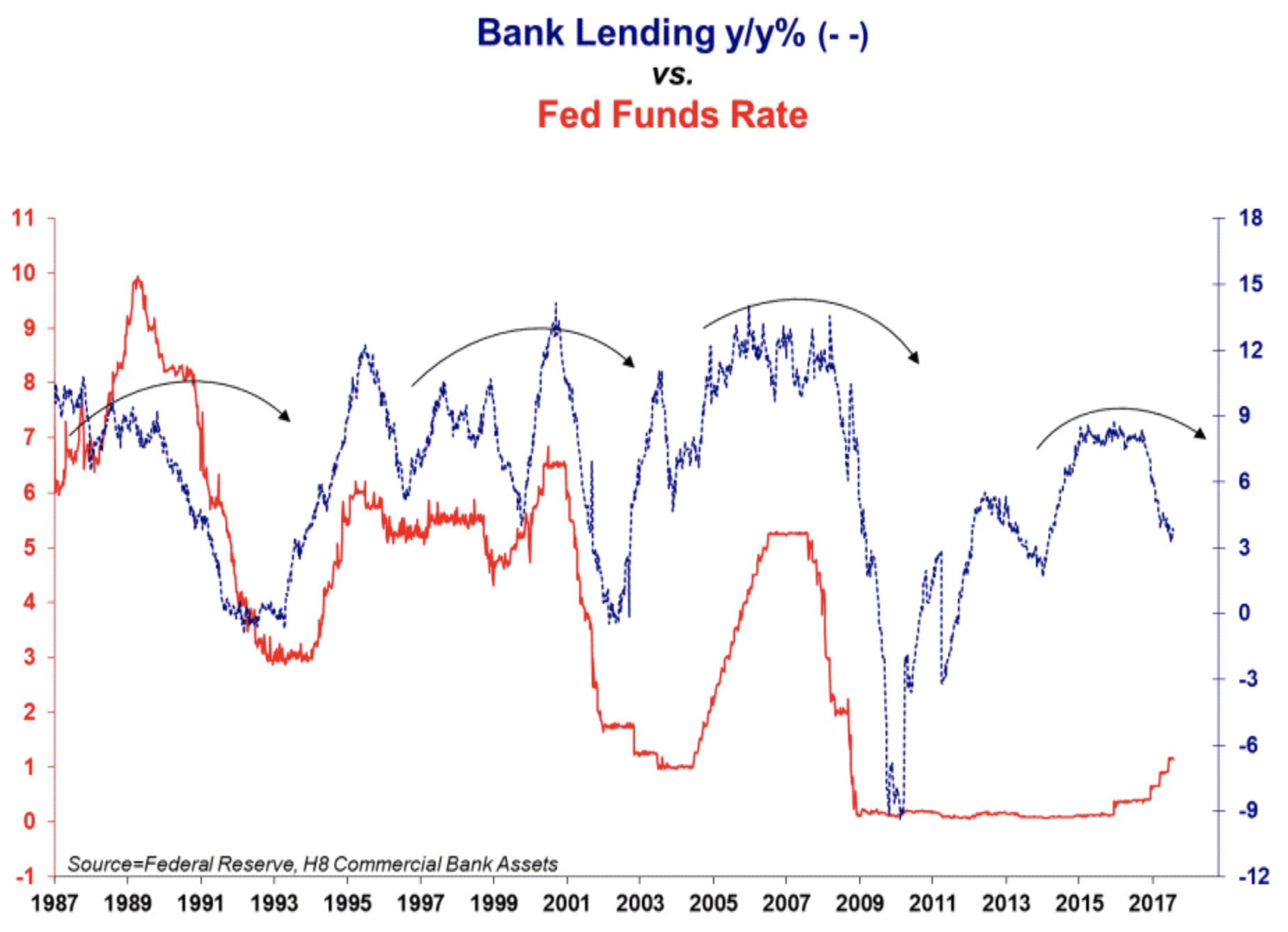 With respect to commercial-bank lending, we suspect accumulating data are touching some nerves at the Fed.  Bank lending is the lifeblood of economic activity, and prominent U.S. lending measures have been swooning throughout 2017.  We believe consensus does not recognize how unorthodox recent Fed rate hikes have been in relation to bank-lending trends.  As shown in Figure 6, above, the Fed generally raises rates into a trend of accelerating commercial-bank lending.  The most recent “liftoff,” in contrast, has been floated into the headwinds of a sharp falloff in lending growth.  Even more troubling for the Fed, as shown in our Addenda Graph, nominal GDP has a very tight correlation with U.S. bank lending trends. 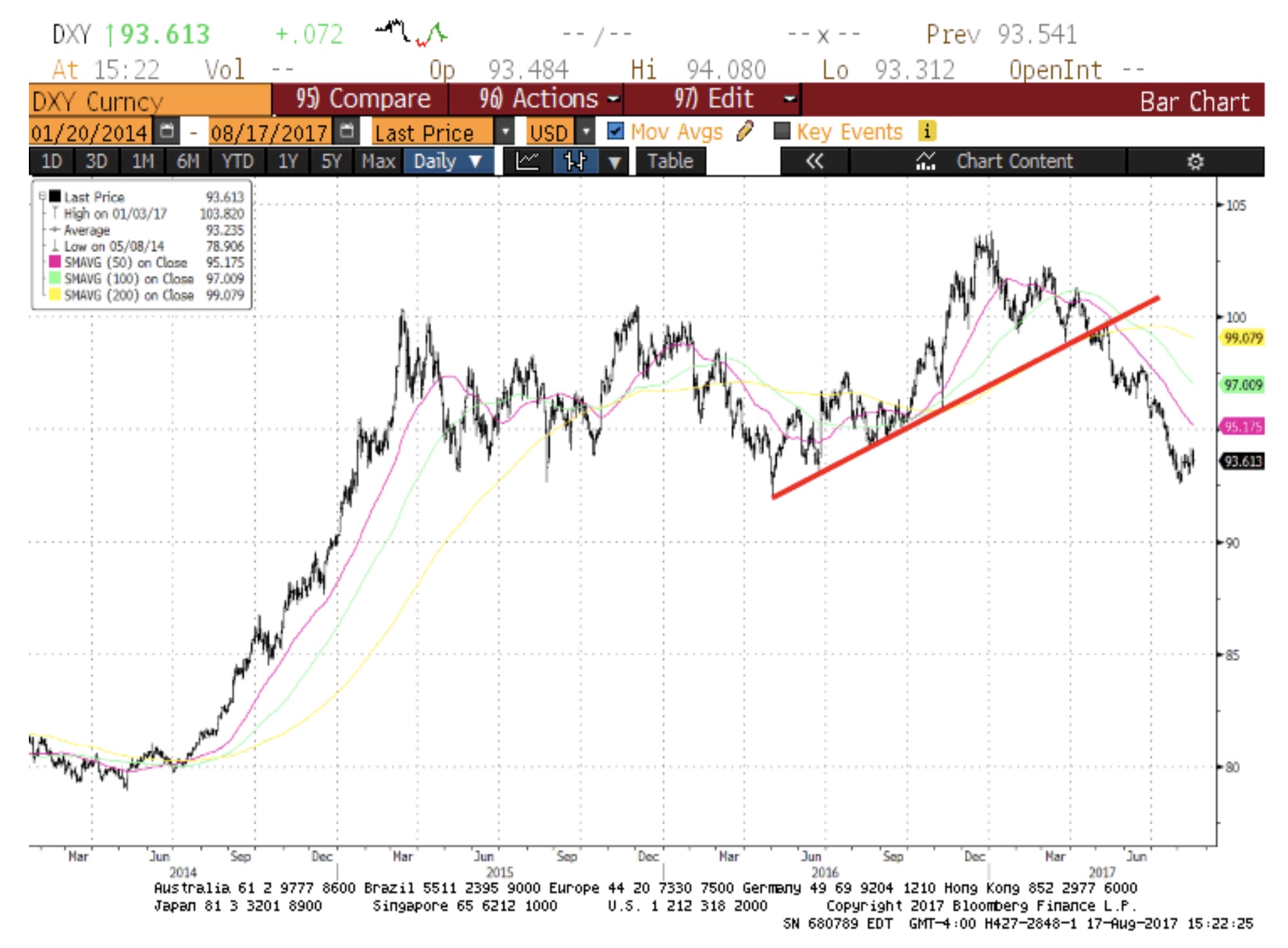 All in all, we perceive a notable change in confidence at the Fed.  Recent struggles in the automotive, retail and restaurant industries appear to be at least partially related to recent Fed tightening.  To us, weak trends in CPI and bank lending are all but telegraphing an imminent change in Fed policy.   In our view, one of the most reliable forward indicators of Fed policy is relative strength in the U.S. dollar.  Beneath headlines, the U.S. dollar has performed miserably during 2017 (Figure 7, above), with the DXY Index declining 11% (from a 1/3/17 high of 103.82 to a 8/2/17 low of 92.58).  It seems only a matter of time before consensus recognizes that the Fed is back in a bind.  Gold should respond enthusiastically.  If you have any questions or comments regarding the report above, please contact a Sprott representative at 800-477-7853.

***ALSO JUST RELEASED: This Development Will Have A Massively Bullish Impact On The Silver Market CLICK HERE.