As the world edges closer to the next crisis, today the man who has become legendary for his predictions on QE and historic moves in currencies, warned King World News that the terror of 2008 is about to come back with a vengeance.

Embrace Uncertainty
August 5 (King World News) – Egon von Greyerz:  “Anyone who doesn’t follow this momentous maxim in coming years is likely to get one unpleasant shock after the next. The reason for this is because the stable progression of the world economy since WWII is now coming to an end. What should have been a normal cyclical high in the next year or two is now going to be the most massive implosion of a bubble full of debts and inflated assets. The system has been “successfully” manipulated for decades by central banks, certain commercial banks, the BIS (Bank for International Settlements) in Basel and the IMF (International Monetary Fund) for the benefit of a small elite…

Egon von Greyerz continues:  “Just look at the chart of the growing wage gap in the US between the top 5% and the middle 50% since 1973. The top group has had a 51% increase while the middle has had a 4% decrease in wages. This is the stuff revolutions are made of and social unrest is clearly one of the uncertainties we must be prepared for. 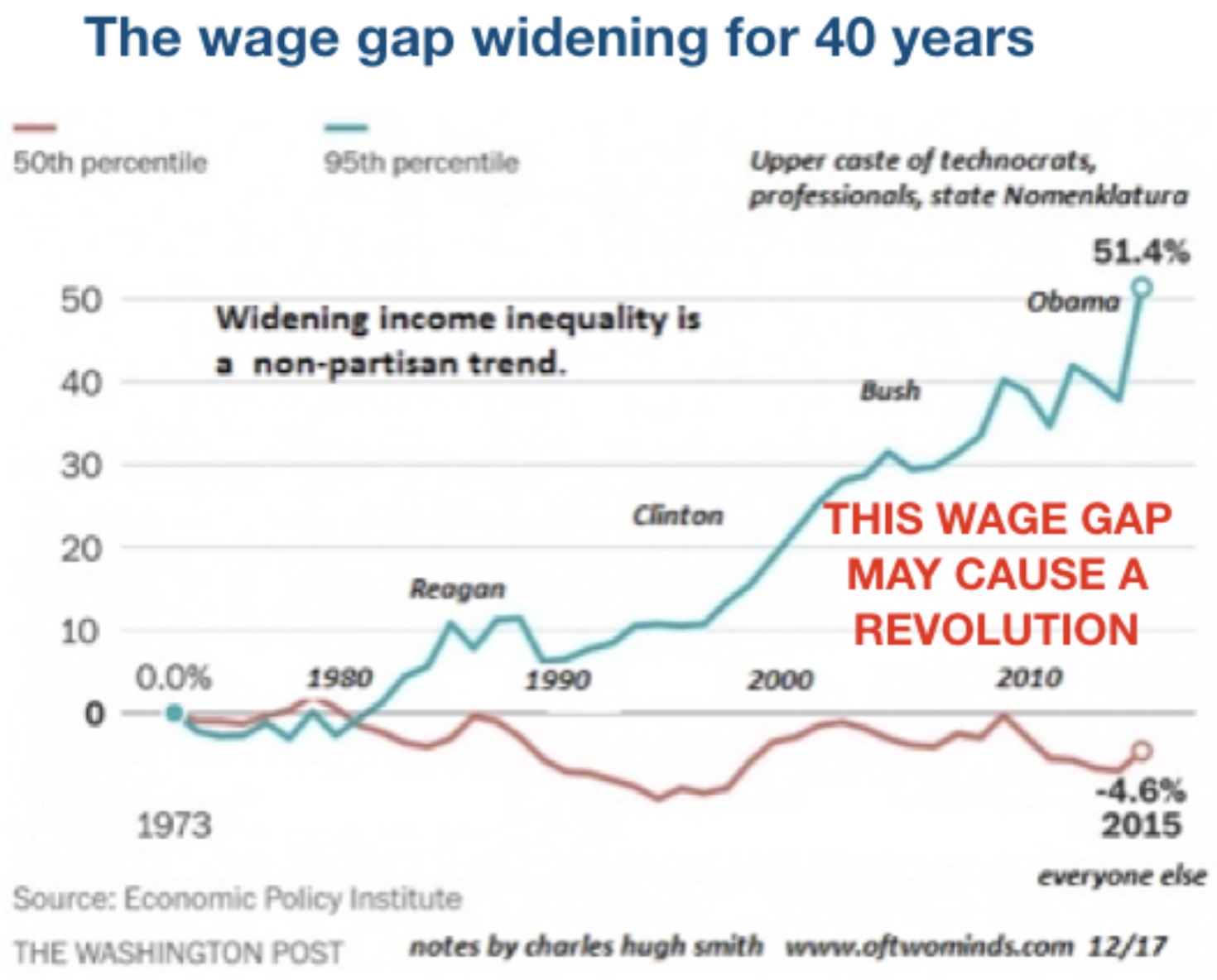 I learned early in life to embrace uncertainty because, as an example, from this second on in anybody’s life all is uncertain. Individual lives can change very quickly and and so can the world economy and the political situation. There are times when projections and probabilities work fairly well, but the next few years will be very different.

Most investors believe that the historically predictable trajectory of stock markets will continue. And based on recent history, why wouldn’t it, especially since the trend has been up for as long as anyone can remember? The corrections of 1973, 1987, 2000, 2007 are quickly forgotten as the market hits new all-time highs.

The average investor always feels very confident at the top of the market. He doesn’t worry about risk, and even if valuations are stretched, ‘the stock market always goes up.’ Markets can easily become more overextended than anyone can imagine. And it is always ‘different this time.’ Investing is about risk and economic risk is today greater than any time in history whether we look at stocks, bonds or property. But the uncertainty today stretches much further than various asset classes. It is much more serious than that because the actions of central banks and the fractional reserve banking system together have created a monstrous financial system that has little chance of survival.

This is clearly not the uncertainty that anyone could embrace. But as with many risks, it is, fortunately, possible to insure against the risk of a banking collapse, the crash of most asset classes, and the final destruction of the currency system. Please reread the last sentence in bold. That statement sounds like hocus pocus. How can anyone offer insurance against the entire financial system?

“There is no means of avoiding the final collapse of a boom brought about by credit expansion. The alternative is only whether the crisis should come sooner as a result of voluntary abandonment of further credit expansion, or later as a final and total catastrophe of the currency system involved.” — Ludwig von Mises

Like most elegant solutions, it is so simple that over 99% of investors as well as ordinary people would not even think about it. But what is even worse is that if they were told about the ‘life insurance’ that could save them from destitution, they would still not consider it. This is exactly what has happened in Venezuela. A socialist regime has destroyed the economy and impoverished the people. If the people had bought this insurance 10 years ago or even at the end of 2017, that could have saved them. Please see my KWN article from last week.

Most people now understand that I am talking about physical gold. It is such a simple and obvious solution to protect against the current risks, but even today less than 1% of people will consider it.

As hedge funds have record shorts in gold, the gold price in dollars is currently making a low for the year. The average gold investor and speculator is either getting out of gold or being very nervous. But the wealth preservation investor is not the slightest bit concerned as he is holding gold to protect against the massive risk in the system. We are currently seeing increased interest from this type of investor. 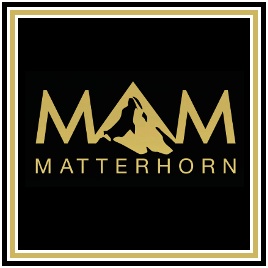 Here Is What We Decided To Do
Sometimes readers criticize us for our views on gold as if we were talking our own book. The reasons for being involved in the gold market have nothing to do with a vested interest. Back in 2001, I identified the risks in the financial system as being so elevated that insurance in the form of gold outside the banking system was a sine qua non (a thing that is absolutely necessary). So early in 2002 we bought important amounts of gold for ourselves and the investors we advised at the time. The price was then $300. We advised our investors to hold a significant part of their financial assets in gold. We considered then that 25% was a minimum but that even higher percentages were advisable.

At the time in 2002, gold at $300 was unloved and undervalued. This is of course the right time to enter an investment. Matterhorn Asset Management was then a private investment company. Due to interest in wealth preservation from around the world, we turned Matterhorn into a regulated Swiss company facilitating the ownership of physical gold and silver stored in ultra-secure private vaults outside the banking system.

Gold rushed up to $1,900 in 2011 and has since been correcting for 7 years. In the meantime, risk has grown exponentially and the reasons for holding gold as a wealth preservation asset are now stronger than ever.

Investors who bought gold around the peak area in 2011 to 2012 are obviously not in the money currently. But wealth preservation investors are not concerned. They know why they are holding gold and that it is only a matter of time before the gold price reflects the true value of worthless paper currencies.

If we look at the quarterly chart of gold in dollars below, the uptrend is very clear. The correction finished at the end of 2015. Gold is poised for a major move up that should start between now and early autumn. 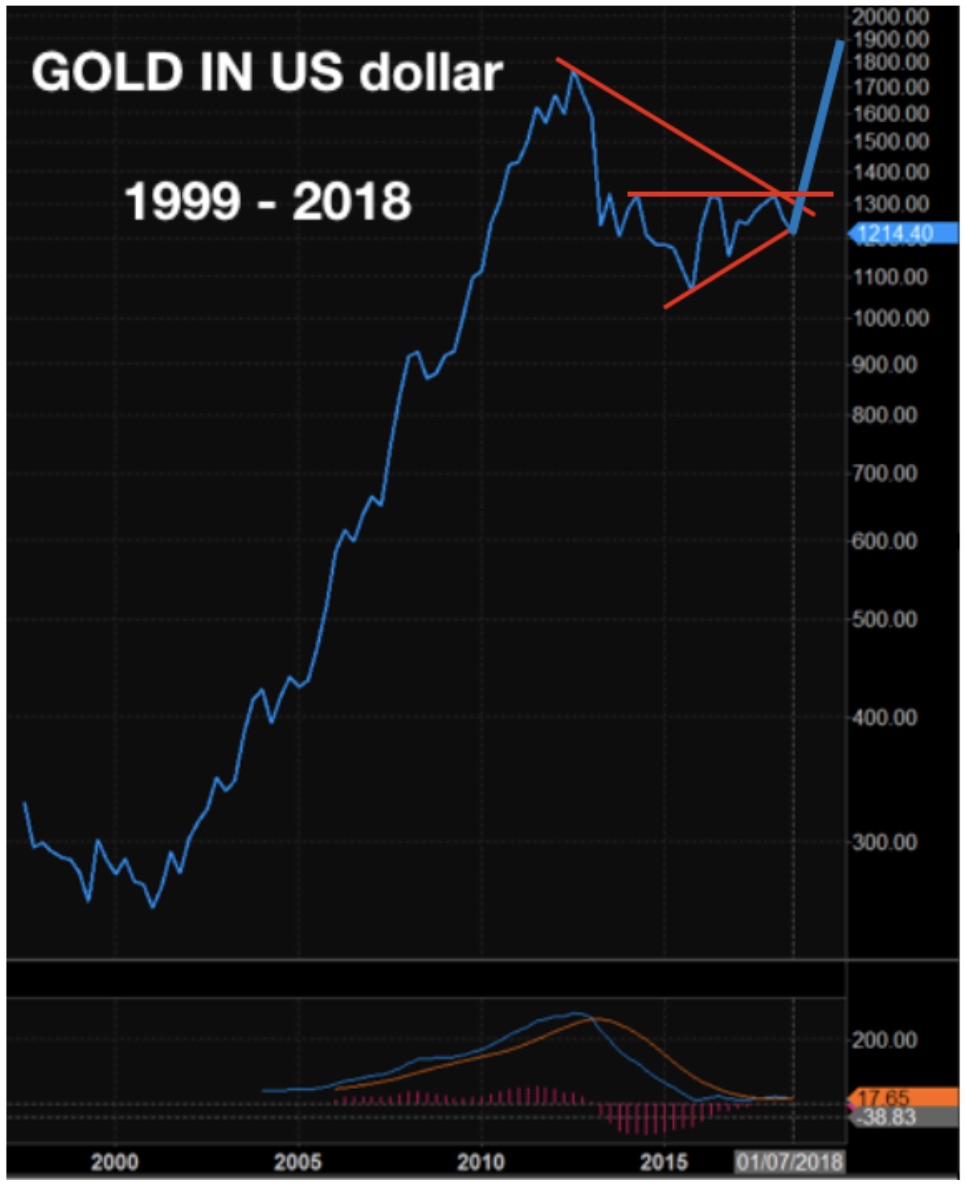 Looking at gold in other currencies such as the Australian dollar, the price is very close to the 2011-12 high. 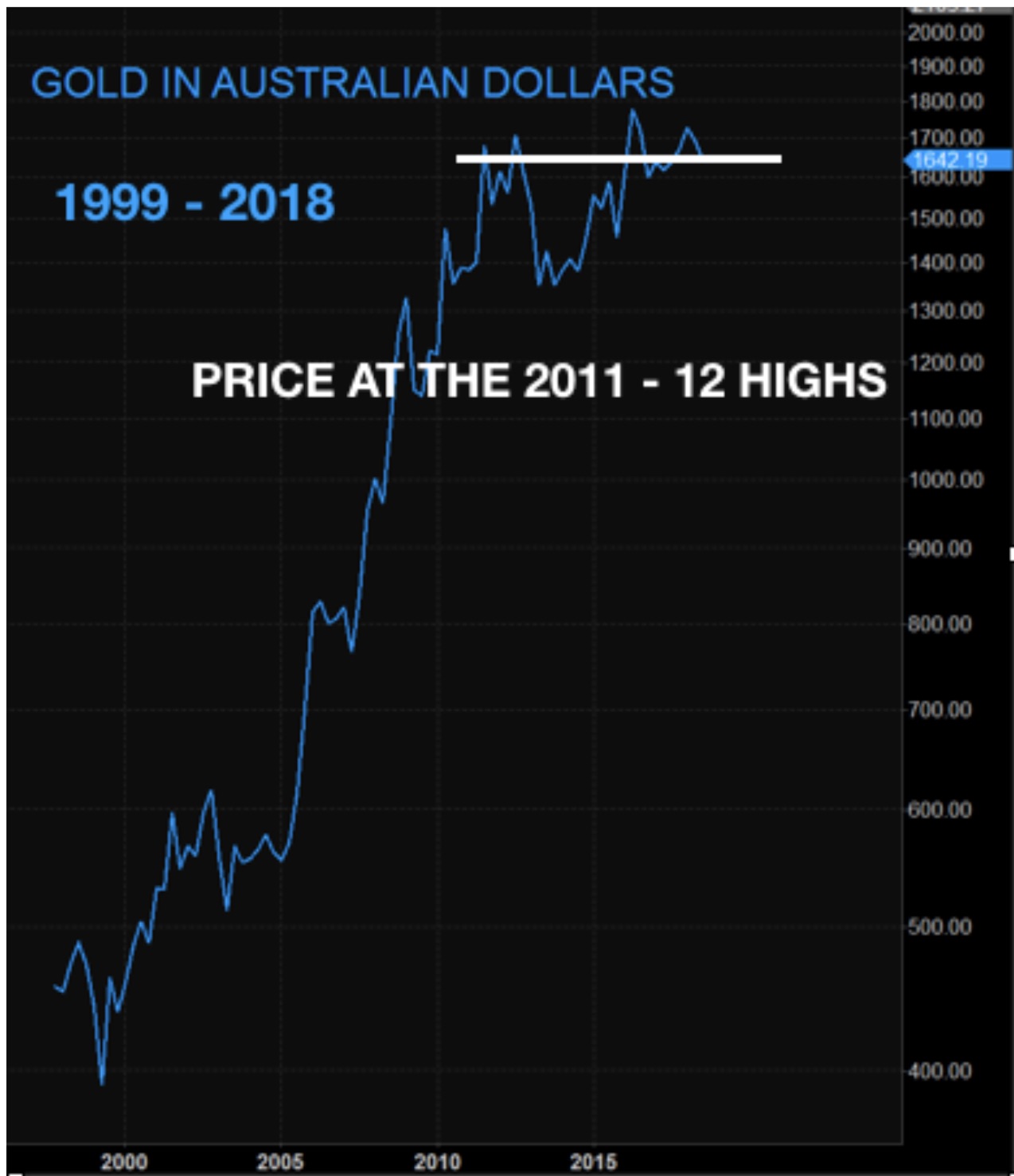 Also in Canadian dollars or British pounds, the correction from the top is much smaller than in US dollars. Gold in US dollars has only been weaker due to a temporarily stronger dollar. When the dollar starts its next leg to its intrinsic value of zero, gold will rise in all currencies including the US dollar. We must remind ourselves that the dollar, even at $1,220 gold price, has lost 80% of its value this century.

Gold at $1,220, adjusted for real inflation, is almost as cheap as it was in 1999 at the $250 low. More importantly, inflation-adjusted gold is now very near the 300 year low of 1999. So right now gold is once again unloved and undervalued and therefore a bargain. On an inflation-adjusted basis, the 1980 high of $850 would today be $16,650. Long before we get hyperinflationary gold prices, that $16,600 level should be easily reached. 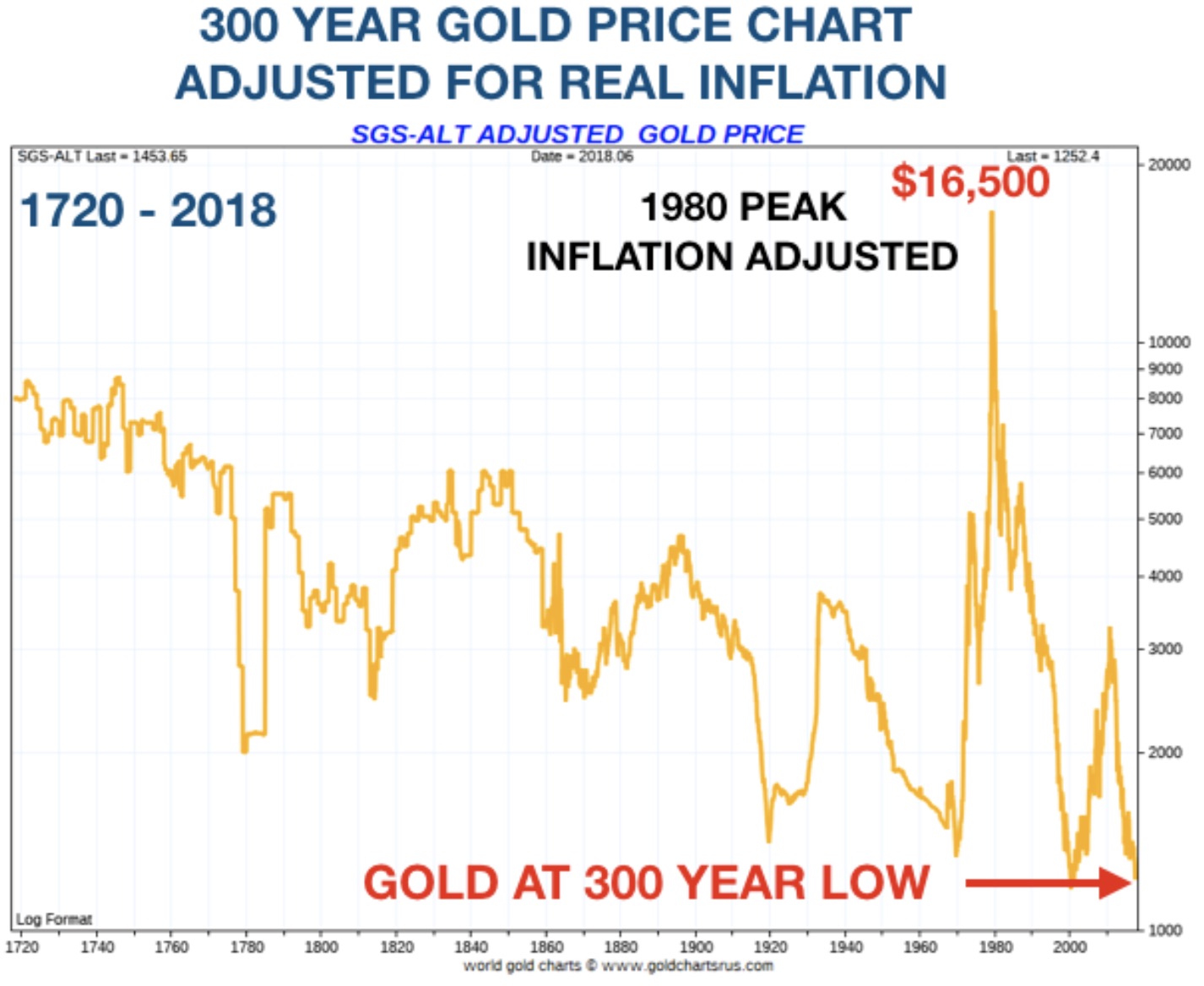 Owning physical gold for wealth protection purposes is the best preserved secret in the West. In this part of the world, virtually nobody holds gold. At the same time, the wise people in the East continue to buy all the gold that is produced annually. China, India, Iran, Turkey, Russia, and many more Eastern nations understand history and economics. That is why they are accumulating major gold reserves at these levels. If you understand the 5,000 year significance of gold as the only surviving money in history, you should follow the example of the East.” For those who would like to reach out directly to Egon von Greyerz and GoldSwitzerland to learn more about how you can protect yourselves and your family CLICK HERE.  For those who would like to read more of Egon von Greyerz’s fantastic articles CLICK HERE.

ALSO JUST RELEASED: A Break Of This Key Level Will Unleash The Gold Price To $1,700 CLICK HERE TO READ.