On the heels of what has been a wild few weeks of trading, here is a stunning look at what the “smart money” is doing.

Smart Money Dumping Stocks At Near Record Pace
April 20 (King World News) – Here is a portion of an extremely important note from Jason Goepfert at SentimenTrader:  “In the March 23 report, we looked at a potentially negative development related to “smart money” traders. At the time, an index that tracks late-day buying had collapsed to a 52-week low while the major stock indexes were still holding above their own lows.

The SMFI is getting a bit of attention thanks to a mention on CNBC. While indexes like the S&P are not too far off their highs, the collapse in the SMFI has pushed it more than 18% below its own high. Prior to 1982, the data isn’t very reliable, so data since then are shown in the chart below. The red bars show how far the SMFI is from its 52-week high. 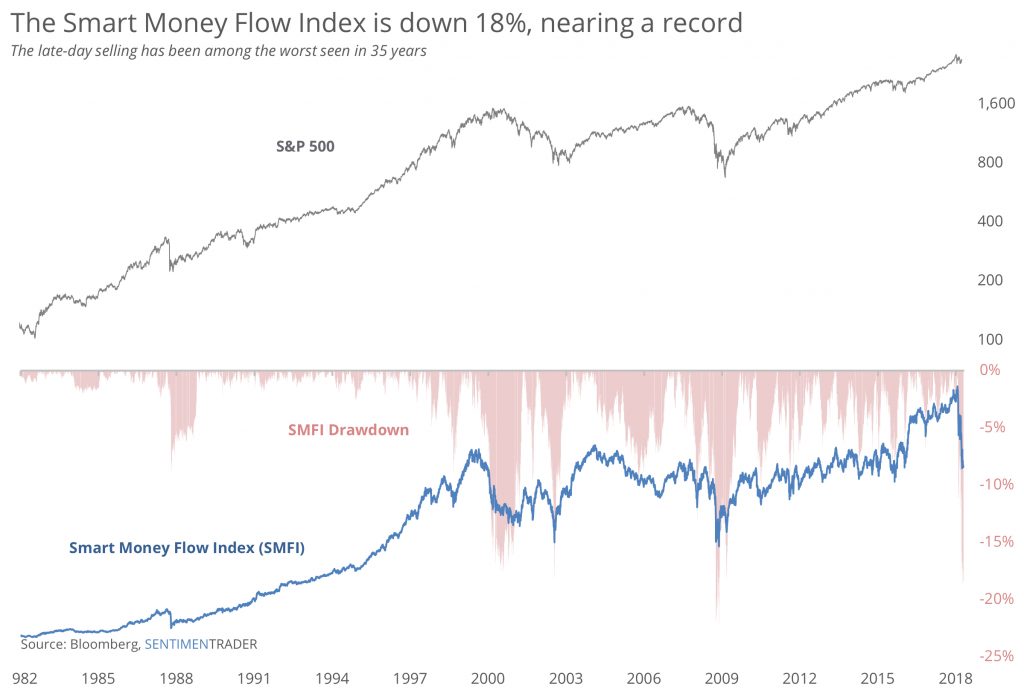 The only time in history that the SMFI declined more than 10% from its high while the S&P 500 was still relatively near its own high occurred in January 2000. Even more than we’ve seen in recent months, the S&P was holding up, churning near all-time highs, while the Smart Money Flow Index was diving lower.

That was, clearly, a good heads-up that the smart money was leaving.

Right Before Year 2000 Collapse Was The Last Time Smart Money Dumped This Aggressively! 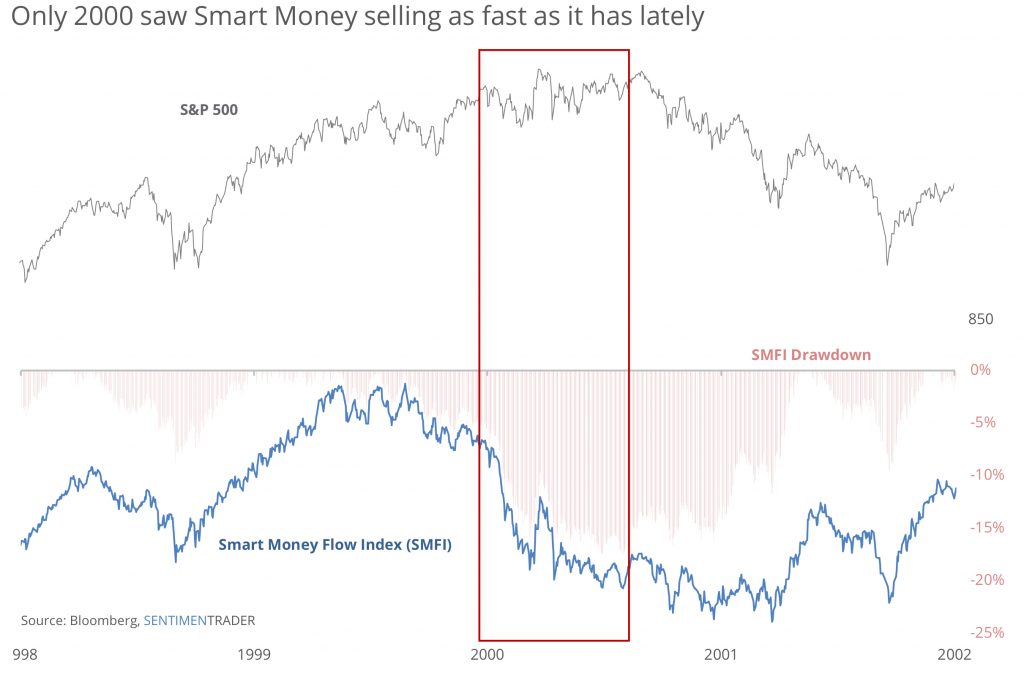 It happened again in 2006, but to a less degree. The S&P was trading at or near its highest level in years, but the SMFI was falling, not quite making it to the -10% drawdown threshold. It didn’t lead to anything ominous, as stocks continued to rally into 2007, and the SMFI recovered, too.

As stocks peaked in 2007 heading into 2008, the SMFI started diving once again, but it wasn’t diverging from stocks, since they were diving, too.

More recently, the SMFI declined more than 8% in the summer of 2015, as the S&P was treading water near its own high. That was a good heads-up as well. But a similar warning sign in April 2014 didn’t pan out.

As noted before, there is a good reason to be leery of this index. Trading is increasingly being clustered in the last hour of the trading session thanks to the massive assets and turnover in passive index ETFs. Assuming that this is “smart money” is a big stretch and it is greatly distorting the SMFI and similar indicators that rely on open/close activity. It’s a different market than it was even 10 years ago, and we shouldn’t rely too heavily on something that was based on a market structure markedly different than we have now.

For those who missed it, this is Egon von Greyerz’s greatest audio interviews ever and I would encourage everyone around the world to stop what they are doing and listen to it immediately by CLICKING HERE.

***Also Just Released “Blastoff” In The Metals Bulls Have Been Waiting For Is “So Close” CLICK HERE.

PIEPENBURG: The Situation Has Gone From Bad To Scary