On the heels of another wild trading week in world markets, today one of the top economists in the world sent King World News an incredibly powerful piece warning that the alarming catalyst for coming global collapse will shock the world.  Below is the fantastic piece from Michael Pento.

April 19 – (King World News) – On a fundamental basis stock prices are reflective of both economic and earnings growth.  When growth is strong, stock prices should increase in value. And when economic activity decelerates or turns negative, stock prices should go down.  Of course nothing is that simple—especially today, when all markets are so highly manipulated by governments and central banks.

Beginning in 2008 the markets followed the Fed on a magical journey down the rabbit hole into a wonderland where bad news is good news; and economic fundamentals and stock prices no longer move in tandem….

Welcome to the worldwide equity bubble — brought to us courtesy of central banks, which has caused the complete decoupling of stock prices from underlying economic activity. This delusion has been fomented by the false notion that QE and ZIRP will eventually cause economies to catch up to record-high stock valuations. 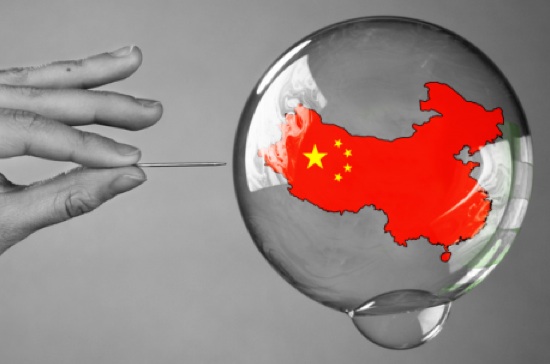 Perhaps the best example of this fiction is the nation of China, where the ride on the command and control economy has left the Communist country perched atop two massive asset bubbles. One in real estate, whose foundation is empty cities, and one in the Shanghai Index, whose value is based on companies that have, at best, questionable accounting practices. But why let a lot of manipulated facts get in the way of a really exciting asset-bubble story. For an exploit in pure froth, China doesn’t disappoint.

Let’s take a look at the recent deceleration of China’ GDP growth compared to the frothy bubble in the Shanghai Composite over the past year:

It’s clear the Shanghai valuation has completely fallen off the economic tracks — as the stock market has been accelerating into decelerating growth. In early March, Beijing cut its gross domestic product (GDP) growth target to "around 7 percent" for 2015, the lowest level in 11 years.  Official data also showed China's exports unexpectedly plummeted 14.6 percent year-on-year in March.

But the bad news doesn’t end there; growth in factory output slowed to 6.4 percent in the first quarter from nearly 10 percent in December. And that officially reported 7 percent GDP growth in Q1 of this year is the lowest growth rate since 2009.

Despite this, the Shanghai Index is at new highs–up 30% YTD and over 106% YOY. This because investors, hesitant to build additional empty cities, are finding new hollowed investments in equities – creating a massive bubble in the stock market.

Adding to the fun, Shanghai traders now have more than 1 trillion yuan ($161 billion) of borrowed cash fueling this high-flying stock market. The outstanding balance of margin debt on the Shanghai Stock Exchange is at an all-time record high and accounts for nearly a 400 percent jump from just 12 months prior.

Although China may sit as the best example of equities decoupling from economic fundamentals, it’s far from the only one. Japan’s NIKKEI Index has skyrocketed up 40% year-over-year, and is up almost 14% year-to-date; despite recent data that confirms the nation is fast turning into one big retirement home.

In the U.S., where growth has been lackluster, the total market cap for stocks is hovering around 127 percent of GDP, far above the 110 percent level seen just prior to the housing and credit bubble collapse and a full 75 percentage points above its multi-decade average.  And with NYSE margin debt for February 2015 at $465 billion, it is also at an all-time record high. Why not borrow money to speculate on stocks when the cost of borrowing is at a record low?

And despite Mario Draghi’s bubble-denial syndrome, the bubble in European bonds has now hit the manic stage, as 30% of European sovereign debt is now trading with a negative yield.  The worldwide bond bubble has now dovetailed perfectly into a massive global equity bubble.

While worldwide markets are cheering central banks' QE — sending stock markets skyrocketing — our Fed is quickly running out of credibility and tools to fight another economic downturn. Zero percent interest rates for 7 years and a $3.7 trillion QE bail-out from the Great Recession have not done anything to improve economic growth. Central banks have merely re-inflated old bubbles and then created a new one in global sovereign debt.

But what happens when investors reach the epiphany that all of the central banks’ interest rate manipulations and money printing didn't work? The U.S. Federal Reserve isn’t able to lower interest rates any further. Furthermore, our central bank is growing exceedingly eager to unfurl its own “mission accomplished” banner on rescuing the economy and to begin the journey on rate normalization with the first rate hike in June.

But if the economy were to enter into a recession at this point, how would the stock market and economy respond? Seven years of ZIRP and QE didn’t help the U.S. economy achieve “escape velocity,” so why would the holding in abeyance of the Fed’s interest rate liftoff this summer, or even another round of QE, automatically send stock prices higher?

Ever since the end of the Great Recession in June of 2009, investors have bought into the belief that central banks will eventually cause economic growth to catch up with equity valuations. To date investors have been willing to excuse sub-par economic growth, such as March’s abysmal Non-Farm Payroll report, on the weather. The Empire State Manufacturing Survey for April showed a month-on-month negative reading of 1.19, giving credence to the belief that economic growth has currently completely stalled. 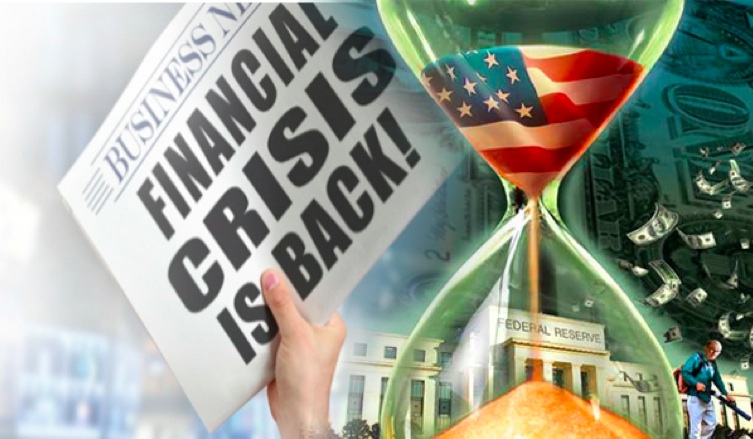 Alarming Catalyst For The Coming Global Collapse Will Shock The World

An objective look at the above charts and data clearly depicts that equity values have become completely divorced from economic reality. The catalyst for the next major collapse in stocks will come from an impending recession that central banks and governments will be viewed as powerless to prevent. This will shock the world.

If April’s better weather doesn’t come along with a spring economic recovery, investors will have finally run out of excuses and will have to face the truth that after seven years of market manipulations, the government has failed to engender sustainable growth—both Q1 and Q2 GDP and earnings growth could be hugging the flat line for the first time since the second quarter of 2009.

Therefore, without an immediate improvement in Q2 data, the erstwhile view of only a temporary disconnect between economic fundamentals and equity prices will become one of indefinite duration. And this should finally cause the massive correction in equity values that is so very long overdue. To learn more about Michael Pento’s financial management services CLICK HERE.  You can also sign up for Michael Pento's weekly podcast at his website.

***ALSO RELEASED: 50-Year Veteran Warns Today's Plunge In Global Stock Markets May Be The Beginning Of A Much Bigger Disaster CLICK HERE.