On the heels of the recent takedown in the gold and silver markets, as rational people marvel at the irrational trading in major markets, the absolute distortion continues–from gold manipulation to DC’s latest lies.

Absolute Distortion Continues—From Gold Manipulation to DC’s Latest Lies
November 24 (King World News) – Matthew Piepenburg at Matterhorn Asset Management (based in Switzerland):  Below we look at the latest official fantasies from DC as well as the same ol’ big-boy gold manipulation tricks meant to keep markets anything but free or natural.

From Dumb to Dumber: DC’s Latest Inflation Solution, More Spending…
In a recent report from The Hill, we discover that the Biden advisory team is now accepting that inflation is not only a financial reality (rather than “transitory blip”), but far more importantly (to them), a political problem.

It will come as no surprise to many that politics and politicians are driven by re-election not candid honesty, and certainly not economic expertise or even a rudimentary grasp of financial (or even grade school) history.

Unfortunately for the self-preservation-driven dunces helming our financial ship, the math of inflation can no longer be masked with more words.

In short, and given rapidly falling poll numbers, the White House has to rev up its “inflation strategy.”

D.C.’s Inflation Strategy?
And if you are hoping it’s going to be an effective strategy, well…please: Don’t hold your breath.

In fact–and we promise that we are not making this up–the Biden administration’s answer to the inflation problem (which is driven and defined by too much money in the system) boils down to this: Spending and creating more money.

The economic advisors actually maintain that the new Biden spending package will, and I quote, “not add to inflationary pressures,” and effectively “pay for itself.”

If anyone on the White House staff took economics in high school or read a single case-study on prior inflationary cycles, they would know better; but for now, the lords are hoping that the serfs won’t know any better either.

But folks, here’s a spoiler alert: Expanding spending with expanded money creation is the very essence of inflation.

Then again, and as we’ve warned for months, politicians say one thing and mean another.

And as we’ve also warned for months, inflation is what these desperate policy makers are after, despite public signaling to combat the same.

To repeat (and worth repeating): Inflating away debt is and was their real (and only) plan all along.

DC’s History of Putting Political Lipstick on Financial Pigs
But in case you think lying to cover up a bad plan is something unthinkable in the corridors of DC, let us harken back to that other political and financial disaster otherwise known as the Iraq War as a simple lesson (and additional case study) in DC fantasy over facts.

As early as 2002 and well into 2003, the following list of “advisory” double-speakers repeatedly told the world and the White House that a war in Iraq, with its oil-rich resources, would “pay for itself.”

As for “paying for itself,” the war in Iraq cost the U.S. well over $7T, and that’s being conservative.

And as for who paid for this, if you are a U.S. tax-payer, then the answer is you, not Iraq.

But as Cheney defended, hey, at least we got $14B in international “assistance,” which would be like me tossing you a penny to “assist” in your purchase of a luxury yacht.

But as all students of failed regimes have learned in history class, the extreme cost of extended wars, unless paid for with taxes (think Truman in Korea), are the first inflationary domino to fall before those same nations and their currencies implode further down the road…

Same Spin, Different Story
Returning to the familiar paradigm of spin coming out of the Biden advisory team, we see that nothing has changed when it comes to replacing hard math and simple truth with linguistic fantasy and political white-wash.

In short: Biden’s latest spending plan won’t be paying for itself.

If you are wondering where the money to pay for the new spending plan is coming from, let us be blunt: The U.S. doesn’t have the money.

Even the most recent report form the Congressional Budget Office confirms that Biden’s social safety net and climate change legislation will increase the budget deficit by at least $367B.

But in an era where money can be created with a Fed mouse-click rather than a productive economy, what’s a $100B here or a another $100B there?

In other words, it will come as no surprise where the needed new money will come from: Out of thin air.

Again, such an open and insane combination of increased fiscal and monetary stimulus is by definition inflationary. Period. Full stop.

That said, there’s also no denying that more spending and “stimulus” as set forth in the Biden plan will inflate nominal GDP to some extent, which might help offset some of the pain of tax receipts not being sufficient to cover interest expenses on Uncle Sam’s Treasury obligations (IOUs).

But regardless of whatever GDP upticks come in the land of the global reserve currency, let us be more honest than DC’s politicians or economic advisors.

More Gold Tailwinds
Specifically: The only way forward to “borrow-&-buy” (i.e., “stimulate”) more GDP is in a new and scary world where inflation rips well (and intentionally) ahead of controlled interest rates.

In short, all of the foregoing is just another way of saying, yet again, that all twisted roads point toward negative real rates and hence gold as currency insurance in a world drowning even deeper in an ocean of debased dollars.

Meanwhile the Main Stream Media (MSM), which by every poll, metric and dinner conversation is becoming more and more of an open and distrusted joke by the day, desperately continues lying at the same pace as the policy makers.

That is, they keep telling the world that inflation is merely a supply-chain rather than broad money supply story, and hence “not to worry.”

Instead, the fear-porn pushers of the corporate-owned and politically-directed MSM want you to worry more about the endless war on Covid (and its variant de jour), which much like the endless war on terror, has become a wonderful pretext (guise) to pursue more inflationary policies while pretending, virtuously, to combat the same…

Thus, as Austria shuts down, and Australia loses its mind, even Germany is only a small step away from further lock downs ahead, of both the vaccinated and unvaccinated, which by every honest statistic of viral case spread among the vaccinated, essentially makes both categories a distinction without a difference.

More Lipstick on More Pigs,
Again, and whatever one’s individual views on COVID policy, we can expect more controls and constraints from on high, whose impact on the global economy, in addition to everything else going sideways, is anything but a growth tailwind.

As controversial and political (as opposed to science-based) lockdowns continue, a growing number of otherwise “flat-earthers” are leaving the workforce.

The latest numbers for the month of September alone confirm that 4.4M U.S. workers simply quit.

Again, and regardless of individual views on mandates, we can all agree that they will add to supply chain and economic disruptions, which just adds more fuel to the inflationary fire we’ve been tracking all year.

And the Gold Manipulation Continues…
Of course, no discourse on faking it, lying or market distortion would be complete without a quick look at the latest artificial boot to the neck of rising gold prices.

As you’ve likely notices, gold recently lost more than $45 in price this week. What you might not have noticed is why.

It boils down to some mysterious entity (i.e., central bank…) dumping $1.25B worth of gold futures (twice) in less than a minute each on that oh-so-nefarious web of market price fixing otherwise known as the COMEX. In other words, the same policy makers who lie to us by the day (see above), are spending their evening hours manipulating the gold price (see below). 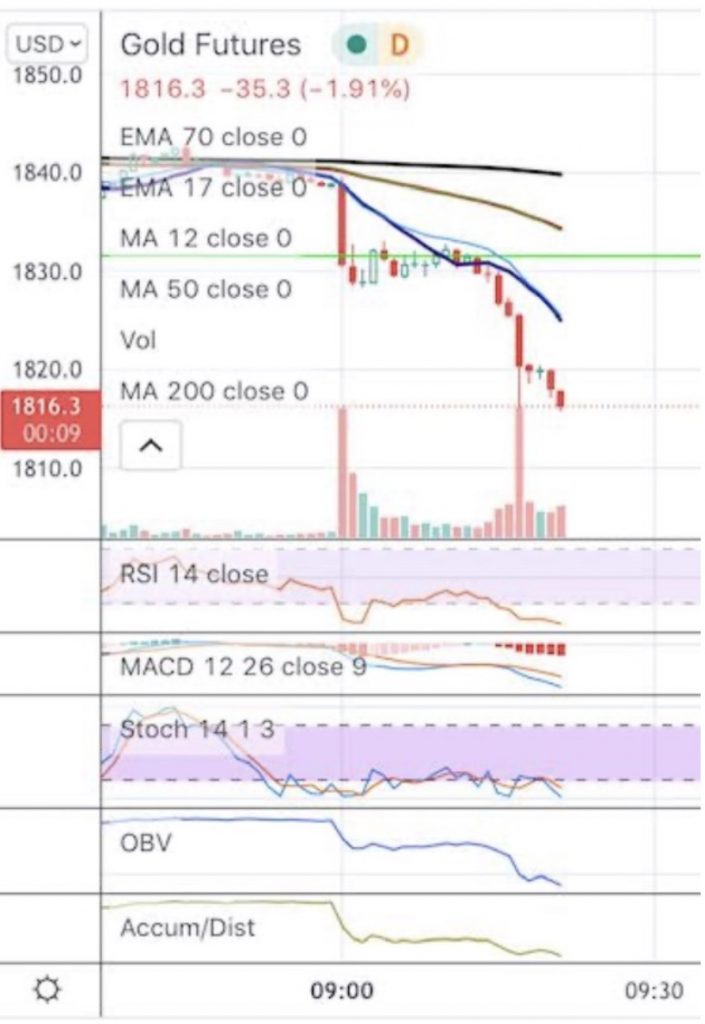 Their motives are as simple as their means: The emperors with no clothes are terrified of honest price discovery in gold and silver for no other reason than such honesty would make a mockery of the lies that otherwise pass for sovereign currencies.

As always, we know such tricks can’t last, but it’s flattering to know how terrified the liars are of truth, and despite same, we still see gold as history’s most honest asset.

Soon, the truth, as well as gold price, will prevail. It always does…This will link you directly to more fantastic articles from Egon von Greyerz and Matt Piepenburg CLICK HERE.