A rare indicator just triggered that has lead to gains 100% of the time.

“The Santa Rally?!”
December 14 (King World News) – Jeff Saut, Chief Investment Strategist at Raymond James:  “If Santa fails to call the bears will roam on Broad and Wall,” is an old stock market “saw” that has withstood the test of time…

What is the Santa Claus rally? According to Investopedia:

“A Santa Claus rally is a surge in the price of stocks that often occurs in the last week of December through the first two trading days in January. There are numerous explanations for the Santa Claus Rally phenomenon, including tax considerations, happiness around Wall Street, people investing their Christmas bonuses and the fact that the pessimists are usually on vacation this week.”

Said rally often spills over into the first two trading sessions of January as well. While not always right, more often than not “If Santa fails to call the bears will roam on Broad and Wall.” We think Santa will show up this year, just like he did last and . . . well, you know the results. In fact, we think 2018 is setting up for a pretty remarkable year (more on that in Monday’s letter). Just for the record, here is what we wrote last year (12/28/16):

“As we enter 2017, we expect the current economic rebound to continue, suggesting GDP growth will likely move toward the 3% level by the end of the year based on less monetary stimulus, more fiscal stimulus, a reduction in the corporate tax rate, and deregulation. Our S&P 500 price target for the year is 2450, but we believe the S&P 500 may actually exceed that level as earnings growth ramps. We think the post ‘Trump Trades’ will continue to have ‘legs.’”

We feel the same way as we enter 2018. As our friend, and captain of SentimenTrader (Jason Goepfert), writes:

“It’s all relative (strength). The weekly Relative Strength Index has reached its highest level in two decades. It has surpassed other readings since 2010, which led to immediate pullbacks. Similar readings led to a gain 6 months later 100% of the time. It’s not just a weekly time frame, either – the RSI is in extreme territory on a daily, monthly, quarterly, and yearly time frame, too, for only the 3rd time in history.” 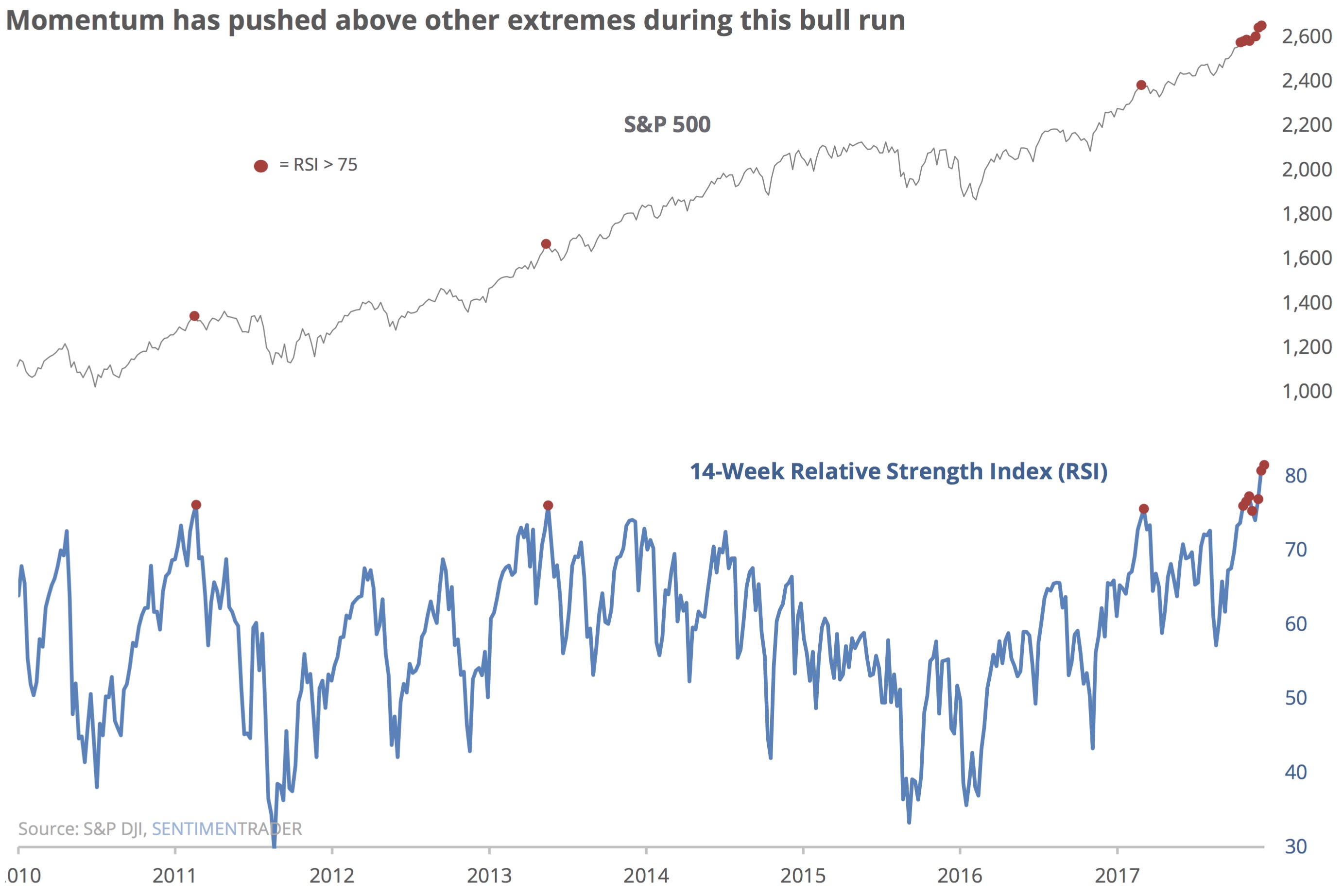 That said, we do not see much of a pullback, but do believe the equity markets will be substantially higher six months from now. Indeed, our work suggests 2018 could be a repeat of 2017. This morning the S&P 500 futures are marginally higher going into this week’s “quad witch” expiration and news that the tax bill is likely to pass with a 21% corporate tax rate. To be sure, there is plenty of kindling to spark an expiry squeeze now and at year-end as Bank of America/Merrill Lynch reports, “A record of all S&P options expire in <2weeks within 2% of spot.” And that’s the way it is at 5:11 a.m. Thursday morning. Merry Christmas…