Today a Swiss firm issued a special report about wisdom and warning in a made world as we enter a golden era.

Wisdom & Warnings in a Mad World
March 14 (King World News) – Matthew Piepenburg at Matterhorn Asset Management (based of Switzerland):  In our own recent reports (and frankly any report) addressing the topic of precious metals, we confronted inflation topics, including, its many tailwinds.

One critical tailwind for rising inflation is rising commodity prices, which are doing precisely that: Rising.

Below, we tackle the commodity issue in greater detail so that you can invest with greater perspective.

Super Cycle
Commodities, like all asset classes, enjoy periods of prolonged upward price trends which can last for years.

Often referred to as “super cycles,” these price moves are significant and demand that informed investors assume two key responsibilities in navigating the same, namely: 1) identifying the cycle and 2) entering early rather than late.

As to the first task, it’s time to consider the broader asset class of commodities (base metals, agriculture, precious metals and energy sectors) and determine if such a cycle is indeed at hand…

It’s equally critical to place such a cycle within the broader context of what a commodity tailwind implies for the bigger picture of the global economy (from inflation to currency matters) as well as the risks (currency debasement) and opportunities (in precious metals) we all face going forward.

First the Obvious: Rising Commodity Prices
Looking at the broad basket of commodity sectors and pricing, as exemplified by the Bloomberg Commodity Index (1 year), it’s fairly safe to confirm that commodities are, and have been of late, taking off. 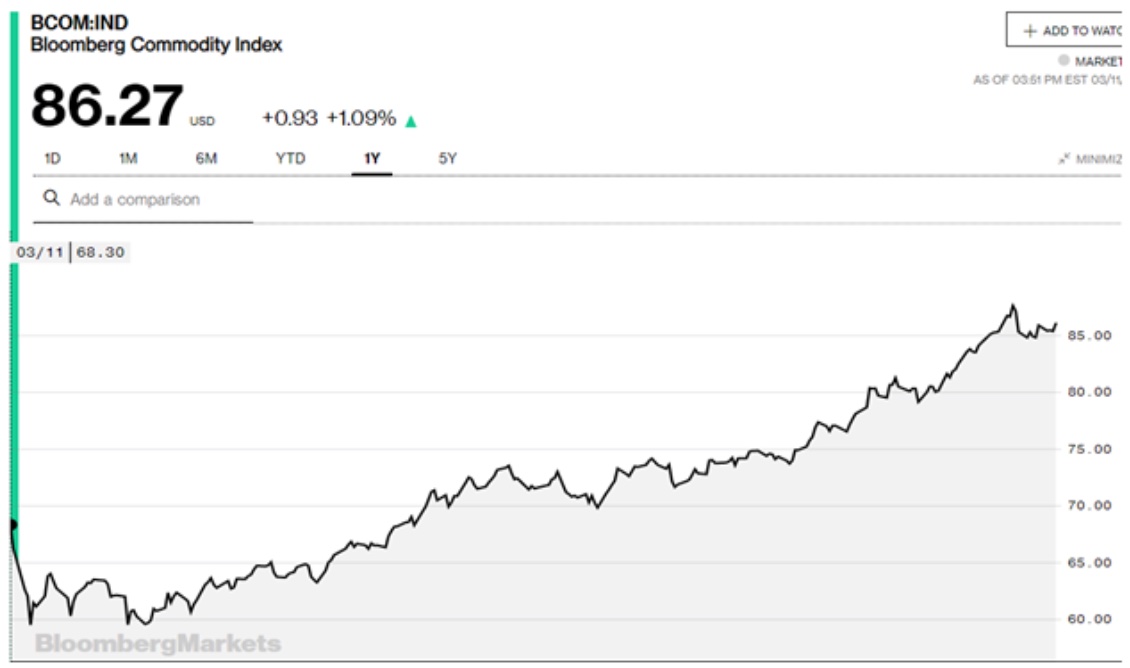 Prior Commodity Cycles
Placing such price action and cycles into historical perspective, the last super cycle in commodities occurred in a macro backdrop quite unlike the current stage.

During the early 2000’s, for example, we all remember the infamous “BRIC’s” era wherein emerging market economies in Brazil, Russia, India and China (in particular!) began a headline-making period of expansion and infrastructure building that continued right up and until the Great Financial Crisis of 2008.

Such expansion provided a demand-driven tailwind for hard assets within the broader commodity space, with, again, China’s extreme (and debt-driven) build-outs leading the way.

Today’s commodity tailwinds, however, are blowing for very different reasons.

Hence, money euphorically chased over-priced equities and credits rather than the far wiser (and far-sighted) allocation to capital projects (“Cap-Ex”). This greatly diluted demand (and pricing) for commodities.

Needless to say, the subsequent shut-down policies of the pandemic did even more to stunt global demand for Cap-Ex allocations or demand for assets like oil, openly crushed by an energy sector suffocating under global travel restrictions.

With this in mind, what, then, explains the chart above and the tilt toward a new commodity super cycle?

Are such commodity price rises demand-driven? Supply-driven? Or is the world simply bracing for higher inflation, and hence higher commodity allocations?

Well, the short answer is yes to all three.

Oil Prices
As to an energy sector which has seen oil prices climb from -$40 to $60+ per barrel, rising demand is certainly not the core explanation for such a dramatic price surge.

Soft Commodities, Agriculture
Supply-chain disruptions tied to the pandemic can also, in part, explain the rising costs of agricultural products seen at the checkout line as well as within the rising commodity index above, but the real determinant for such soft commodities has always been, and always will be, weather-dependent factors.

Base Metals
But supply constraints in the energy and ag sectors alone do not even come close to explaining the new, and rising price cycle in the above commodity index.

With a new “green” Biden administration in the White House, campaign promises for an environmental revolution all point toward a rising demand in specific metals and raw materials needed to build a new economy away from carbon.

This, alas, is a major tailwind for base metals.

Additionally, whatever one thinks of the grossly over-valued tech sector (which it clearly is), technology is the future, and a tech consumer economy directly impacts demand for base materials (i.e. lithium, platinum, copper, nickel etc.) needed for continued tech expansion, and a more “carbon-free” tomorrow.

As economies crawl out of the Covid hysteria on the back of still debatable vaccine solutions, the base metals so critical to the electrification needed to spur further technological and modern environmental projects will be a boon for the foregoing hard assets.

As in just about everything that global policy makers now to do to address any “recovery” project, they will “pay” for the same with a coordinated strategy of more debt (i.e.  fiscal policies of extreme deficit spending) and more printed/debased currencies (i.e. monetary policies of extreme money printing).

And guess what folks? Such a “strategy” is a text book set-up for more inflation ahead.

As more money flows into the real economy in the form of direct checks to displaced workers and funding projects within the real economy, “QE for the people” will slowly rival “QE for Wall Street.”

Thus, unlike the hitherto closed-loop of printed dollars going from the Fed to the big banks and the U.S. Treasury, we’ll see money flowing directly into the open (and public) loop that is the real economy.

This, of course, means a greater velocity of money at the ground level, and that, of course, is a mathematically-confirmed setting for more and rising inflation.

As most investors know, commodities do well as inflation rises, which the commodity super cycle of the 1970’s is an extreme reminder.

The Current Inflation Lie
This, however, does not mean we’ll be seeing anything like the reported inflation numbers of that bygone (bell-bottom) era in the near-term—but higher inflation is coming, and once inflation rates exceed nominal bond yields (and hence turn into rapidly descending negative real yields) the precious metal sector of the broader commodity pool will skyrocket.

In many ways, of course, inflation is not just coming; it’s already here.

We’ve written, for example, about the open CPI lie that places inflation at 2% rather than the more honest 10% felt by anyone living in the real world: 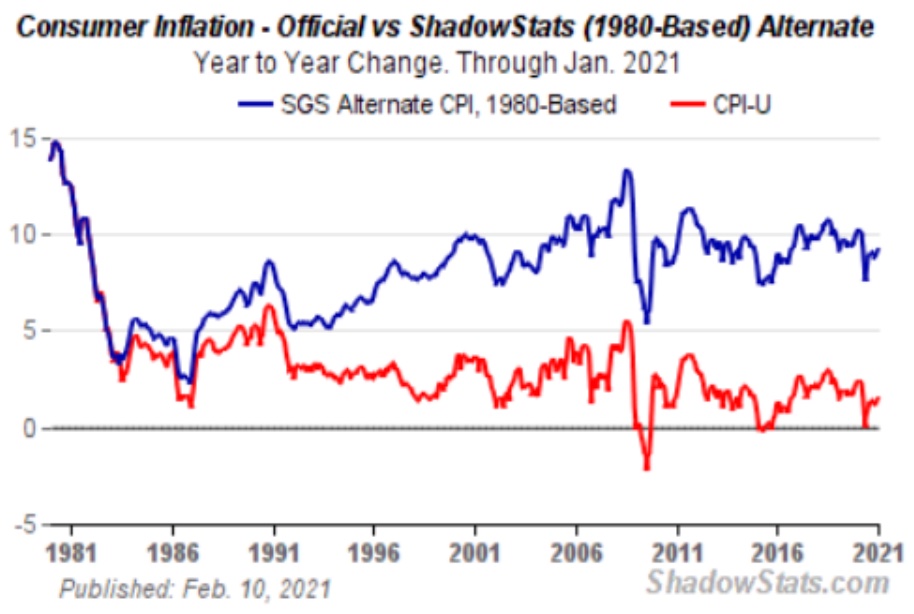 But in case you still trust government inflation reporting, consider the following excerpt from the Chapwood Index (sent to me by a recent reader).

The data speaks for itself: The real cost of living increase index vs. the CPI is rising city by city at double-digit rates, far surpassing the “2%” range comically promulgated by our so-called data providers in DC. 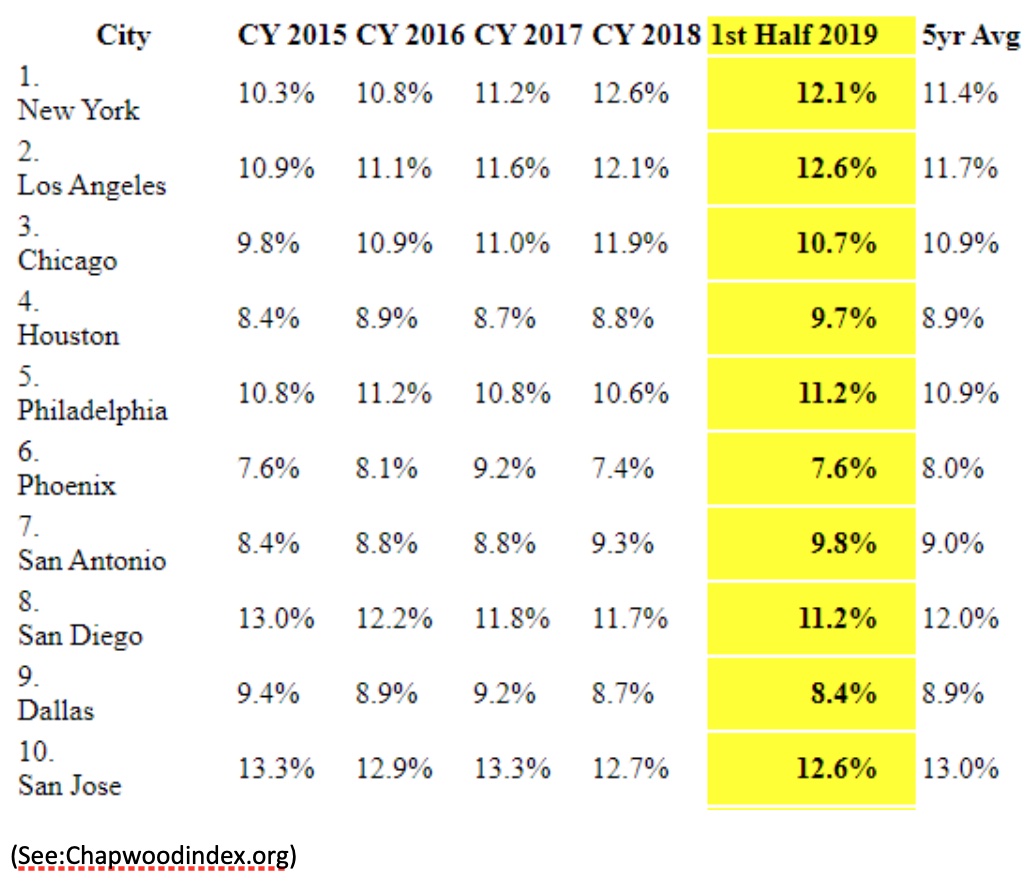 Precious Metals
But as broader commodities race higher, many are naturally wondering why gold and silver have seen declines rather than surges since their 2020 highs.

After all, monetary policy is loose, currencies are being printed (i.e. debased) by the second and higher inflation expectations are going mainstream. This should be a boon setting for precious metals, no?

In short: What gives?

We’ve addressed this question via a wide variant of angles, from 1) increased gold and silver short-covering by the bullion banks, 2) direct COMEX distortion of paper gold prices and 3) speculative money flows into tech stocks and cryptos or 4) the rising U.S. dollar.

But as we’ve also made repeatedly clear, the primary headwind for gold stems from the fact that right now there is an artificial rise rather than fall in real yields, and that is momentarily bad for gold and silver pricing.

By this, we simply mean that the current (and openly bogus/dishonest) inflation rate is not significantly outpacing the current yield on the 10Y US Treasury.

What investors need to know, however, is that this current scenario is as temporary as an “honest man in Parliament.”

That is, for all the reasons stated above and elsewhere, more inflation is coming, and like Paul Revere on horseback through Boston, we’re here to warn you of its arrival as well as implications.

This an absolutely critical point to understand, for the common notion that commodities perform poorly in low-rate environments is an error.

What really matters to boost prices in commodities like gold and silver is not that interest rates are low or high, but that on a relative basis, rates just need to be lower than inflation rates.

And this, folks, is precisely the optimal environment (inflation strongly outpacing yields) toward which precious metals are headed.

Stated otherwise, their prices will go up because inflation is going up.

This, by definition, means that “inflation adjusted” (i.e. real) Treasury yields will go deeper and faster into negative territory, which is the ultimate and historically-confirmed scenario for spiking gold and silver prices.

In sum, rising commodity prices (in general) will help drive inflation rates higher, which, in turn, will drive gold prices (in particular) well past their August 2020 highs.

For now, all that informed precious metal buyers need to do is allow inflation to take its natural course higher and watch gold enjoy its inevitable, as well as natural, climb northward…This will link you directly to more fantastic articles from Egon von Greyerz and Matt Piepenburg CLICK HERE.

GOLD BULL: Look At This…

One of the largest undeveloped gold deposits in the world!