With stock markets weaker across the globe, today a 50-year market veteran warned King World News that a huge game-changer is about to strike.  He also discussed the truth about what is really happening around the world.

John Embry:  “Yesterday we saw a surge in stocks and a smash in gold.  The interesting thing was the supposed reason for the surge in stocks was related to discussion of possible Chinese easing.  Well, continuous easing and additional QE by virtually every country in the world would normally benefit gold and silver, not cause them to plunge in price….

“But instead we had a surge in overvalued stocks markets and gold and silver were under considerable pressure.  This was just more bogus action in the markets, which, as I’ve noted previously, suggests to me that there is a major problem behind the curtain.  Who knows whether it’s related to derivatives or not, but there is something the central planners are very afraid of.

The basic problem in the world is that there is far too much debt and there isn’t enough good collateral.  So it seems to me that they are always trying to inflate the value of the collateral — stocks, bonds, real estate, etc.  My major concern is that this is going to end horribly.  The desperate actions of the central planners is simply delaying the inevitable. 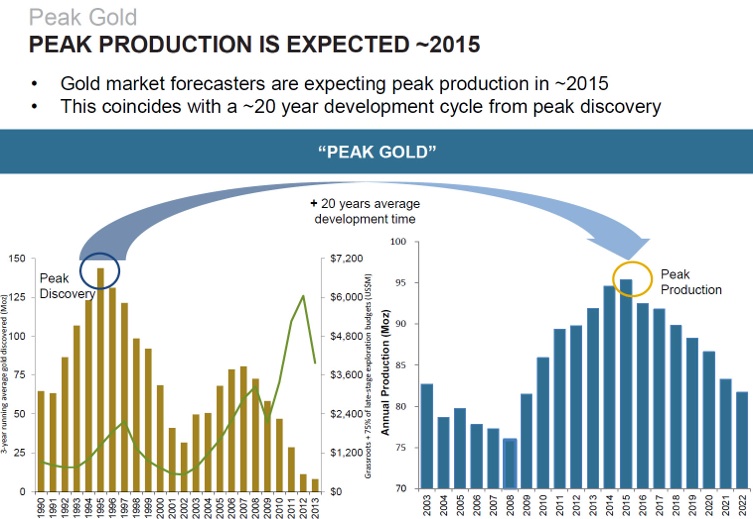 Interestingly, Goldman Sachs is now warning of peak gold production in 2015.  That’s really an interesting revelation.  I can guarantee the public that we are headed for peak gold production.  The only reason production has held up this far is because many high-cost mining companies have been forced to high-grade aggressively just to keep their heads above water.

This not only assures lower production in the future but it also damages many ore bodies because it’s harder to mine them after they’ve been high-graded.  It also makes them less productive in the future.  With exploration in the tank because of uneconomically low gold prices and the destruction of the junior gold share market, which funds the vast majority of gold exploration, there will be a precipitous drop in production over the next few years, irrespective of how high the gold price goes.

With the arrival of peak gold and demand for physical bullion continuing to increase, as per Andrew Maguire’s comments on KWN late last week, we are heading for a huge game-changer that will see create major shortages of available physical gold.  Taking it one step further, the ultimate implication for quality gold shares is that they will explode to the upside, overwhelming short positions, when the price of gold finally starts to reflect reality.

So although the recent action is extraordinarily frustrating, I would just encourage people to remember what this is all about — it’s an attempt to protect a system that’s going down the drain.  People need to make sure they have protection in the form of gold, silver and high quality mining shares.”

Embry added:  “The geopolitical situation has been going from bad to worse and this is tremendously supportive of serious physical buying of gold and silver.  And I thought this was beautifully detailed in the KWN interview with Andrew Maguire late last week.  Maguire laid out the true conditions of the physical market and people should be paying attention to this because I think it’s very important for their future financial well-being.”

***ALSO JUST RELEASED: Richard Russell – A World On The Edge Of Chaos, The Dangers Of Russian Roulette And What You Must Know Right Now CLICK HERE.

ALERT: Leeb – Gold May Trade Higher On Monday But Expect This Before It Hits $10,000