We are looking at a 1970s-style stagflation where high inflation and a stagnant economy will persist for years to come. Plus monetary tightening is now global and expect historic moves ahead.

Historic Moves Ahead
October 12 (King World News) – Graddhy out of Sweden:  Energy in a bull run, real inflation picking up strongly, a commodities bull market starting last year in April which I called, probable blow-off final push in general equities starting (after which the only game in town will be commodities). Historical moves – be on right side…

1970s REDUX: Expect High Inflation For Years To Come
Peter Boockvar:  Eyes are certainly on profit margins in the coming weeks, but the direction also gets to how temporary or not all the currently cost and pricing pressures are. Keep in mind that when a company is experiencing unforeseen cost shocks like a quadrupling of shipping costs, or a doubling in energy bills or a sharp rise in other costs of goods sold or also a notable rise in labor costs, even if these increases plateau at some point or fall thereafter, if the reversal in these examples doesn’t happen quickly or get back to where they were prior, companies who can’t recapture these cost increases all at once (and most can’t), do so over time. They do this to reestablish profit margins. It is a key factor in why companies will be raising prices for the next few years I argue.

With respect to small businesses, the September NFIB small business optimism index fell 1 pt from August to 99.1 and that is the weakest since March. I gave you the employment stats yesterday and here are the others. Off the highest level since 1980, those planning on Higher Selling Prices fell back by 3 pts to 46%. For perspective, since 1974, this number has averaged 11.1. 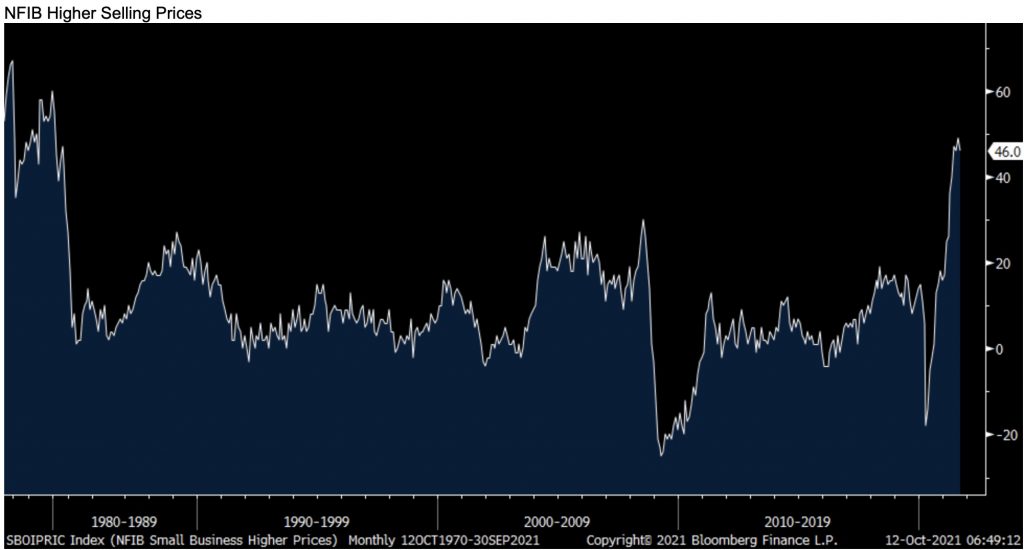 This Can’t Be Good For Business
Capital spending plans and plans to increase inventory both fell 2 pts m/o/m and are about in line with the 6 month average. Those that Expect a Better Economy fell another 5 pts to the worst since 2013 at -33%. To reflect how disappointing this is, it was +5 in March 2020 when the world was shutting down. 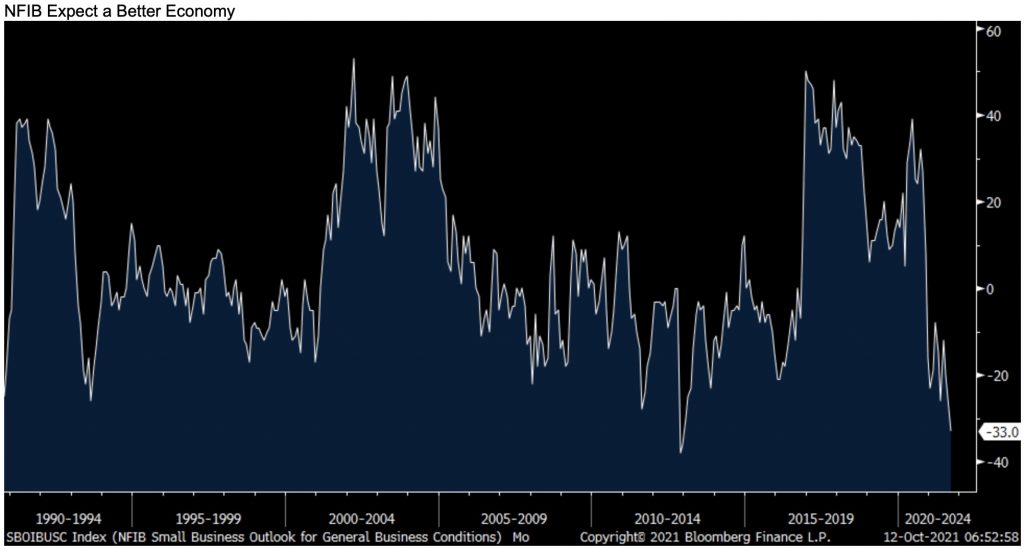 On the other hand, those that Expect Higher Sales rose 4 pts to back above zero at +2. I can’t square the circle on those two divergences. After falling by 3 pts in August, those that said it’s a Good Time to Expand rose 1 pt. Lastly of importance, Earnings Trends rose 1 pt but at -14% it is just off the lowest since January 2021 and likely points to profit margins worries.

The inability to meet demand is the main concern of small business but they have some others. The NFIB chief economist said:

“Small business owners are doing their best to meet the needs of customers, but are unable to hire workers or receive the needed supplies and inventories. The outlook for economic policy is not encouraging to owners, as lawmakers shift to talks about tax increases and additional regulations.”

Bellwether Warns About Continues Inflation Pressures
Fastenal, one of my favorite company industrial bellwethers because of its amazing long term track record, slightly beat revenue estimates but met the expectation for eps. On the top line they said, “The third quarter of 2021 continued to experience strong growth in underlying demand for manufacturing and construction equipment and supplies, which drove higher unit sales that contributed to the increase in net sales that we experienced in the period.” On the cost side they said this, “We continue to experience pressure related to material and transportation cost inflation. This is true across our offering, but is particularly acute for fasteners and overseas shipping. Pricing actions taken throughout 2021 as part of our strategy to mitigate the impact of marketplace inflation on our gross margin percentage contributed to the increased impact of net pricing on sales in the 3rd quarter of 2021. We will continue to take actions as necessary to mitigate the impact of product and transportation cost inflation in the 4th quarter of 2021.” They didn’t specify to what expect pricing will be one of the actions in addition to possible cost cuts elsewhere.

Monetary Tightening Is Now Global
After hiking rates by 25 bps at their last meeting to .75%, the Bank of Korea held steady overnight fully as expected but laid the groundwork for another move higher in November. BoK Governor Lee said “We held the rate this month, but we will look into whether to raise the rate again next month while watching the situation. If the situation doesn’t deviate too much from the one the board is looking at, it’s the view of the majority today that it will be good to consider an additional hike.” Notwithstanding another hike coming and a rise in yields, the won is trading lower vs the dollar. The Kospi sold off with some other Asian markets and by 1.4%. There was some green though in the region seen in India, Thailand, Malaysia and Indonesia. Again, monetary tightening is now global.

While consumer price inflation in Japan is still microscopic and being held down by lower mobile phone fees, producer prices are doing what they are doing everywhere, going up sharply. In September PPI rose .3% m/o/m, one tenth more than expected and up 6.3% y/o/y. It was 2008 when oil prices were spiking the last time Japan saw something like this and 1981 before that. 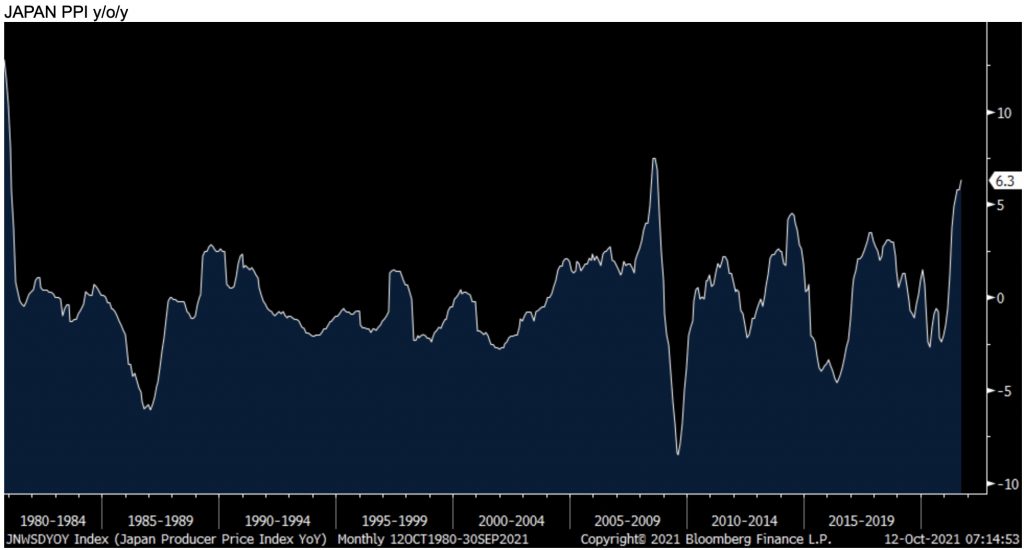 At .38%, while it doesn’t sound like much, the implied inflation rate in the 10 yr inflation protected JGB is at the highest since December 2018. 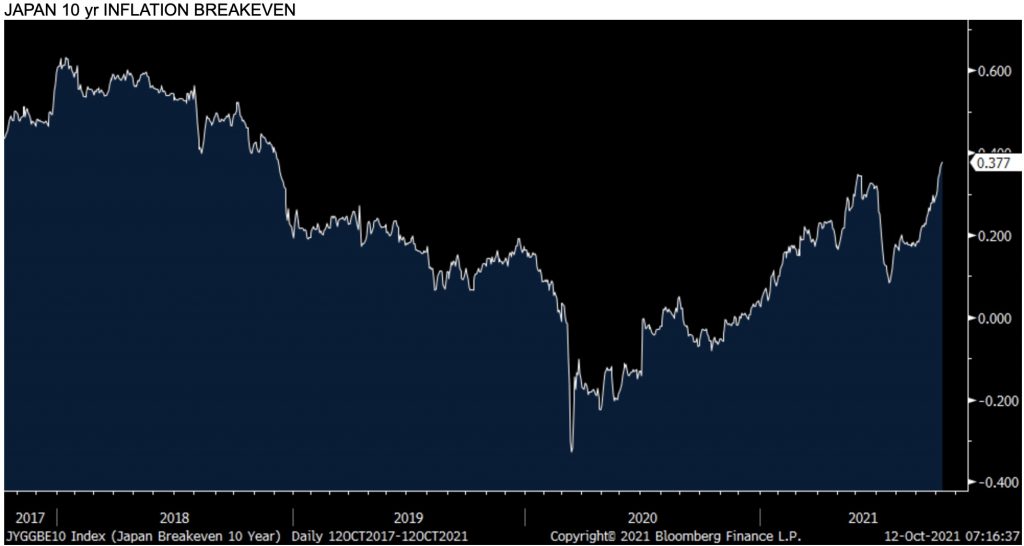 As a big importer of energy, the Japanese yen continues to lag and sits at near a 3 yr low. The BoJ in the midst of global tightening in the coming quarters, might just be the only one that doesn’t.

Growing Pressure On Bank of England To Hike Rates
With the UK furlough program now over, these job numbers are now dated but still good. For the 3 months ended August, employment rose by 235k, just off the estimate of 250k and up from 183k in the prior time frame. The unemployment rate fell to 4.5% from 4.6% and that is the lowest since July 2020. As labor shortages exist in the UK too, weekly average earnings ex bonus’ rose 6% y/o/y thru August. For September, jobless claims fell by another 51k and August was revised down by 30k to -88k. This all confirms the growing pressure on the BoE to hike in the coming months.