“Gold was not selected arbitrarily by governments to be the monetary standard. Gold had developed for many centuries on the free market as the best money; as the commodity providing the most stable and desirable monetary medium.” — Murray Rothbard

Have you ever been to the Disney World Magic Kingdom in Florida? Or maybe you’ve drunk beer out of a glass boot at Oktoberfest? Or if you’re not the type of person to spend your money on something so extravagant, you’ve probably at least bought a loaf of bread in your life?

The reason I am asking these questions will become clear in a second. But first let’s talk about the dollar…

As consumers we are used to pricing goods in dollars (or whichever currency you use). However, using the dollar as a benchmark is less than ideal because it has lost more than 95% of its value over the last 100 years. In fact, most of the rise in prices over the last century can be attributed to a loss in the purchasing power of the dollar. Austrian economists take a different, and better, approach to measuring purchasing power, they use gold.

After 1971 the growth in fiat money has outpaced the growth in gold production. As a result gold has protected investors in the long term against the loss of purchasing power caused by persistent money supply inflation. Rather than looking at higher gold prices as a gain in the precious metal’s value, they should be seen as a consequence of monetary inflation.

Even though the gold price in US dollar terms is currently not (yet) in the vicinity of its all time high, the data are clear: the price of gold in terms of the dollar has increased by a factor of 34 since 1971. In the long term the gold price is rising against every paper currency. 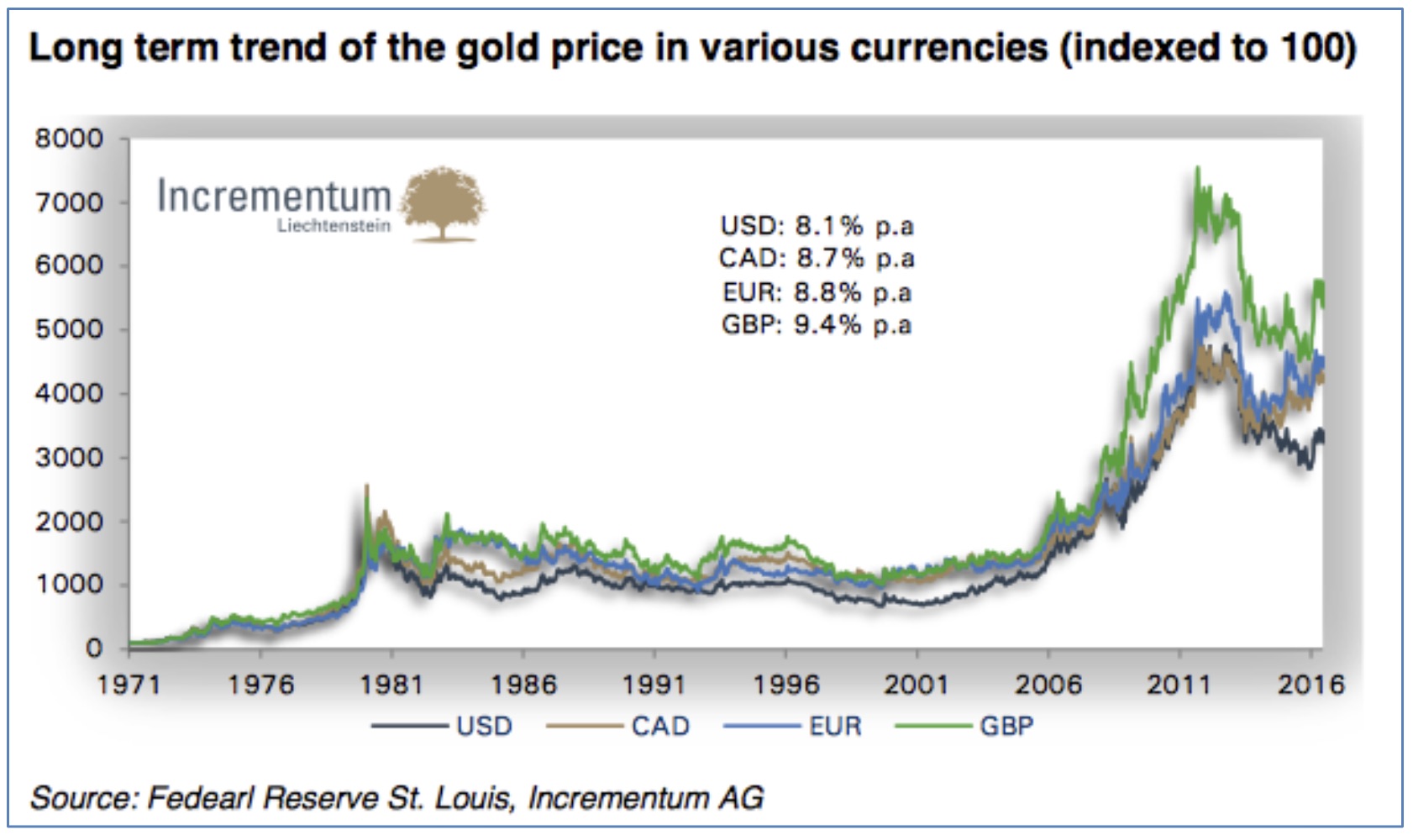 The growth in the gold price is simply a side effect of monetary inflation. But how has this monetary growth affected our purchasing power? Most investors will know that the price of oil has grown considerably over the last decades, however if we price oil in real money, gold, the cost per barrel has remained surprisingly stable.

In the chart below we show on the one hand the gold/oil ratio (i.e., how many barrels of oil can be bought with one ounce of gold), and on the other hand it shows the inverse of the oil price (i.e., how many units of oil can be bought with one US dollar). One can see that while the price of oil in terms of gold tends to be relatively stable over time and gold’s purchasing power currently stands actually 40% above the level of 1971, the US dollar has lost has more than 95% of its purchasing power relative to oil over the same time period. 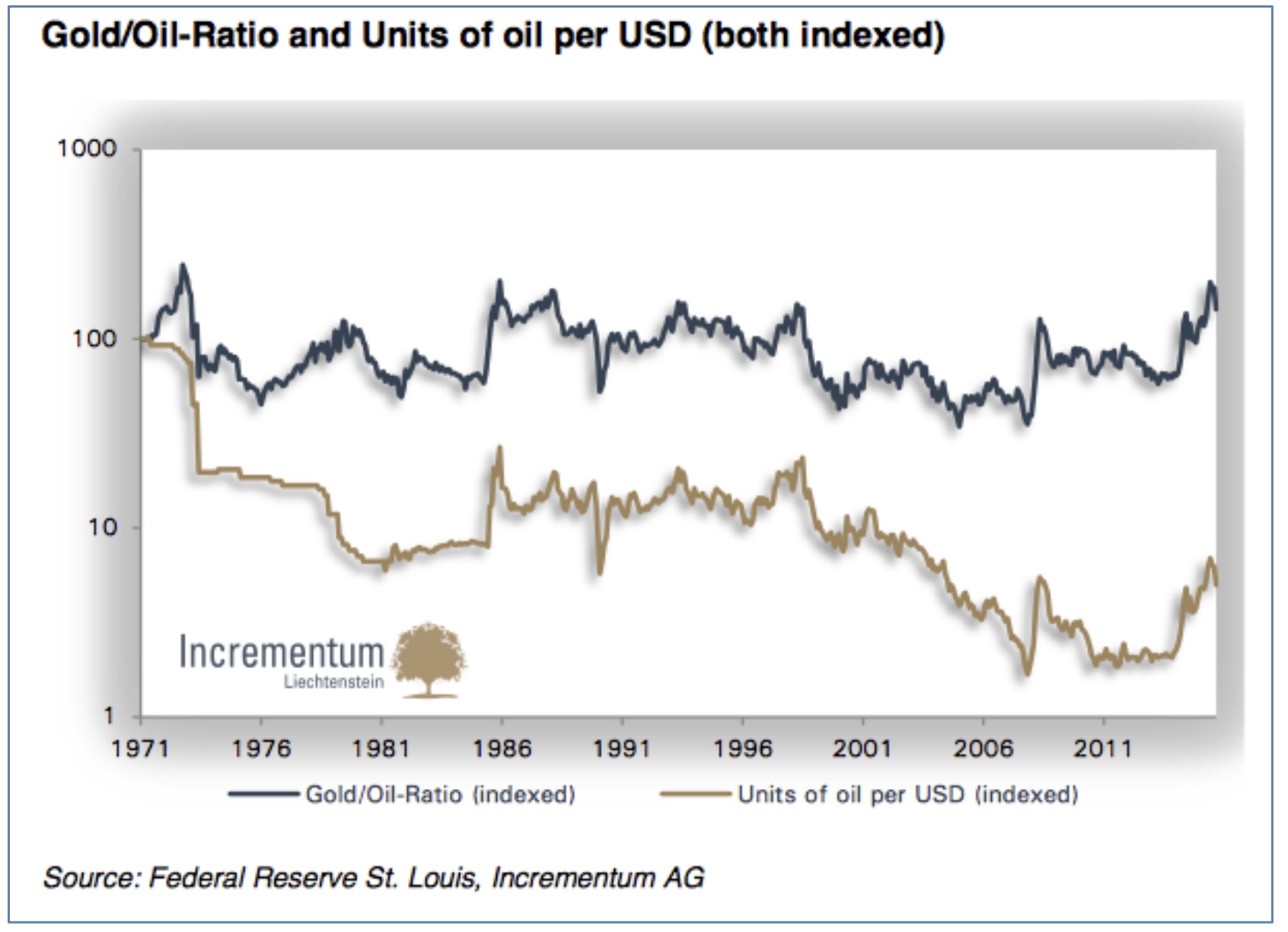 “For the naive mind there is something miraculous in the issuance of fiat money. A magic word spoken by the government creates out of nothing a thing which can be exchanged against any merchandise a man would like to get. How pale is the art of sorcerers, witches, and conjurors when compared with that of the government’s Treasury Department!” — Ludwig von Mises 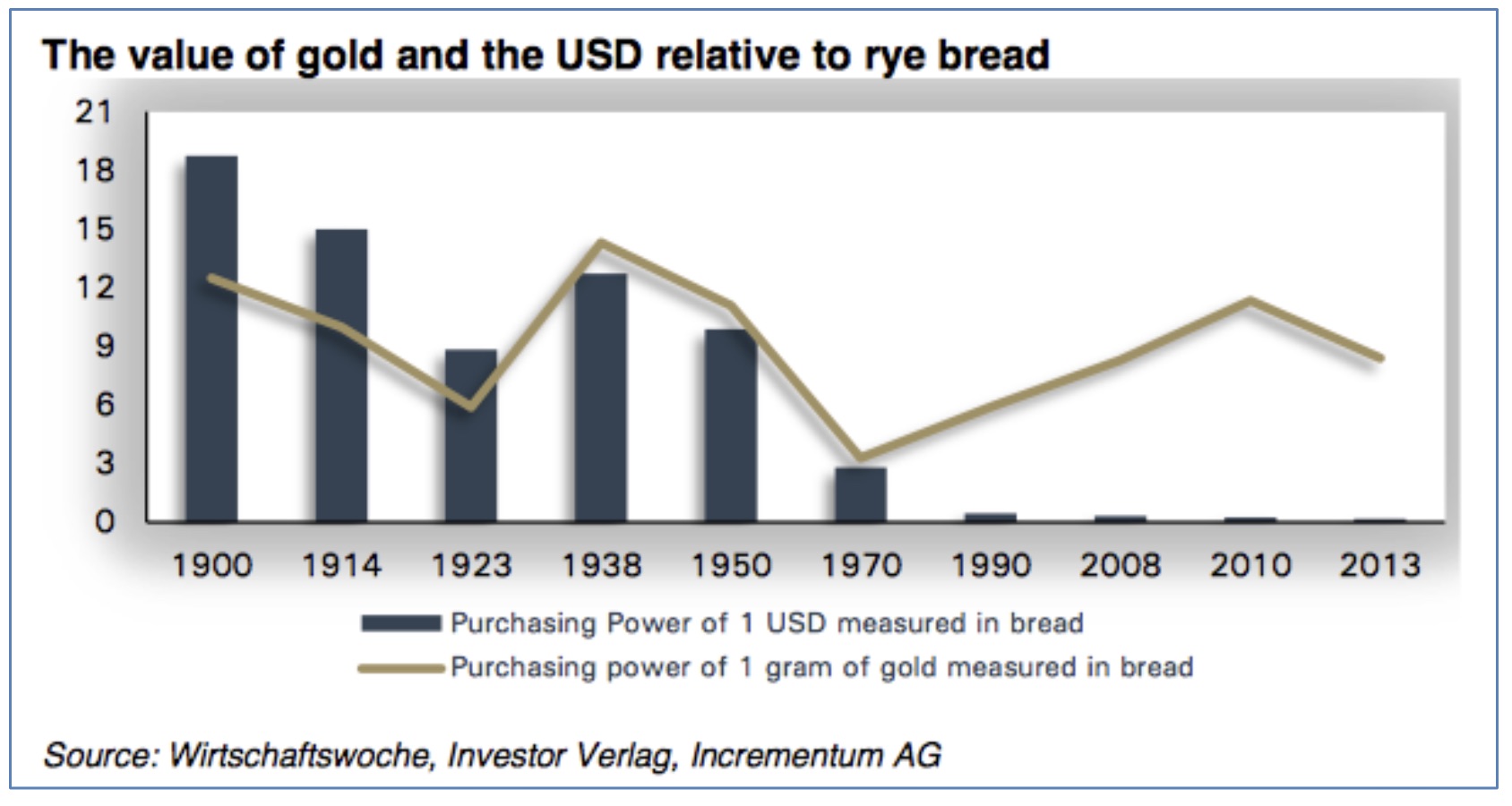 The contrast between the purchasing power of gold and paper money becomes especially obvious when looking at the prices of leisure attractions. The entrance fee for the Disney World Magic Kingdom in Florida is used as a proxy for leisure attractions in the US (I told you we would return to Disney).

At the time of its opening in 1971, the ticket price stood at USD 3.50 per day, today the entrance fee amounts to USD 110 per day. That equates to an average annualized price increase of 7.96%, twice the official inflation rate. If one looks at these ticket prices in gold terms, it can be seen that a median of 12 tickets could be purchased with an ounce of gold over time. Currently this figure stands at 10.9, which is quite close to the long-term average. 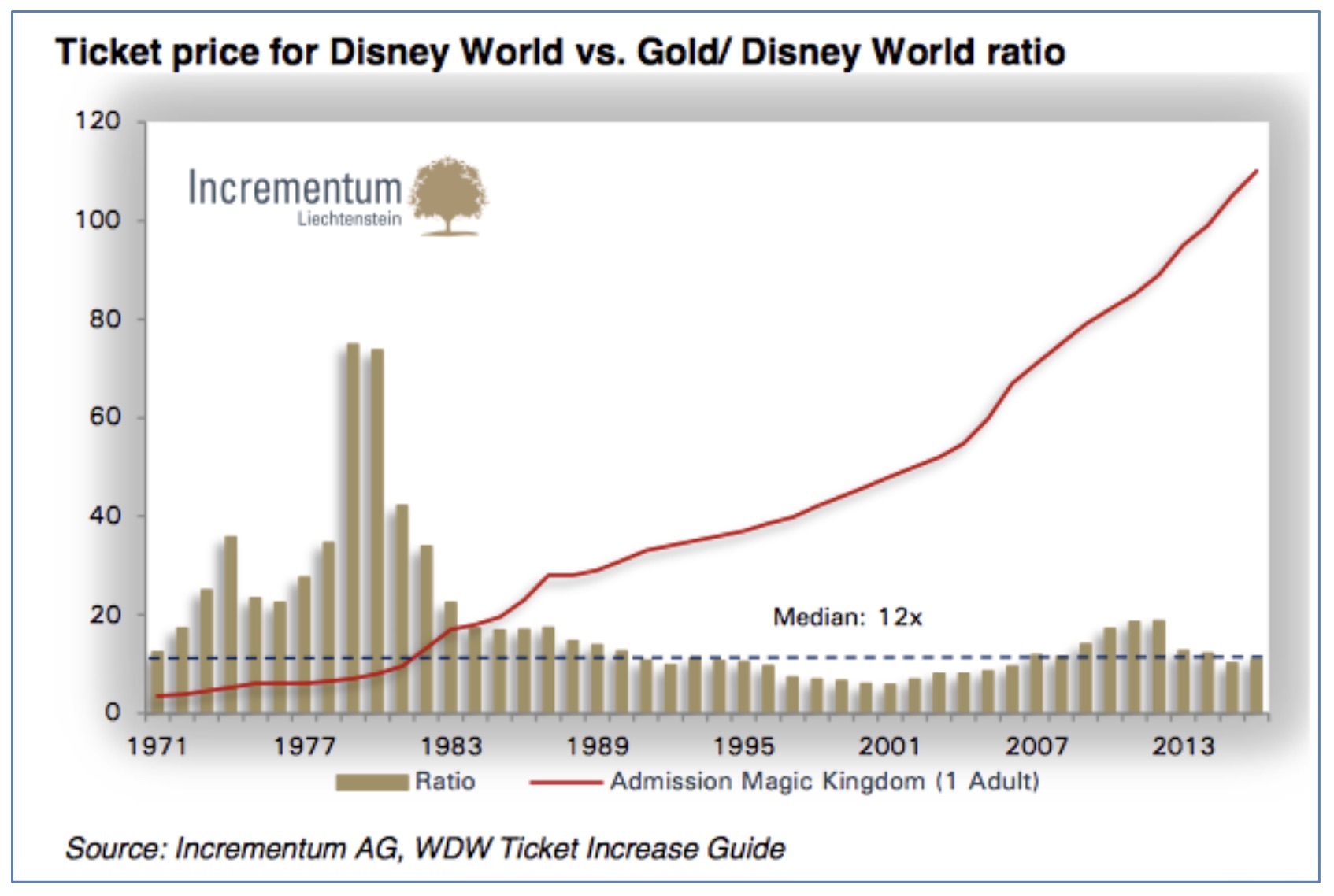 What Disneyland is for Americans, the Oktoberfest is for Bavarians. A regular feature of our chart collections is the “beer purchasing power” of gold. While a liter of beer (a “Maß” in German) at the Munich Oktoberfest in 1950 cost the equivalent of EUR 0.82, the average price in 2015 was EUR 10.25. The annual price inflation of beer since 1950 thus amounts to 4.2%.

If one looks at the price of beer relative to the gold price, then one ounce of gold could buy 100 liters of beer in 2015. Historically the average is 87 liters – thus the “beer purchasing power” of gold is currently slightly above the long-term average. The peak was however reached in 1980 at 227 liters per ounce. We believe it is quite possible that this level will be reached again. Beer drinking gold hoarders should revel in this development. 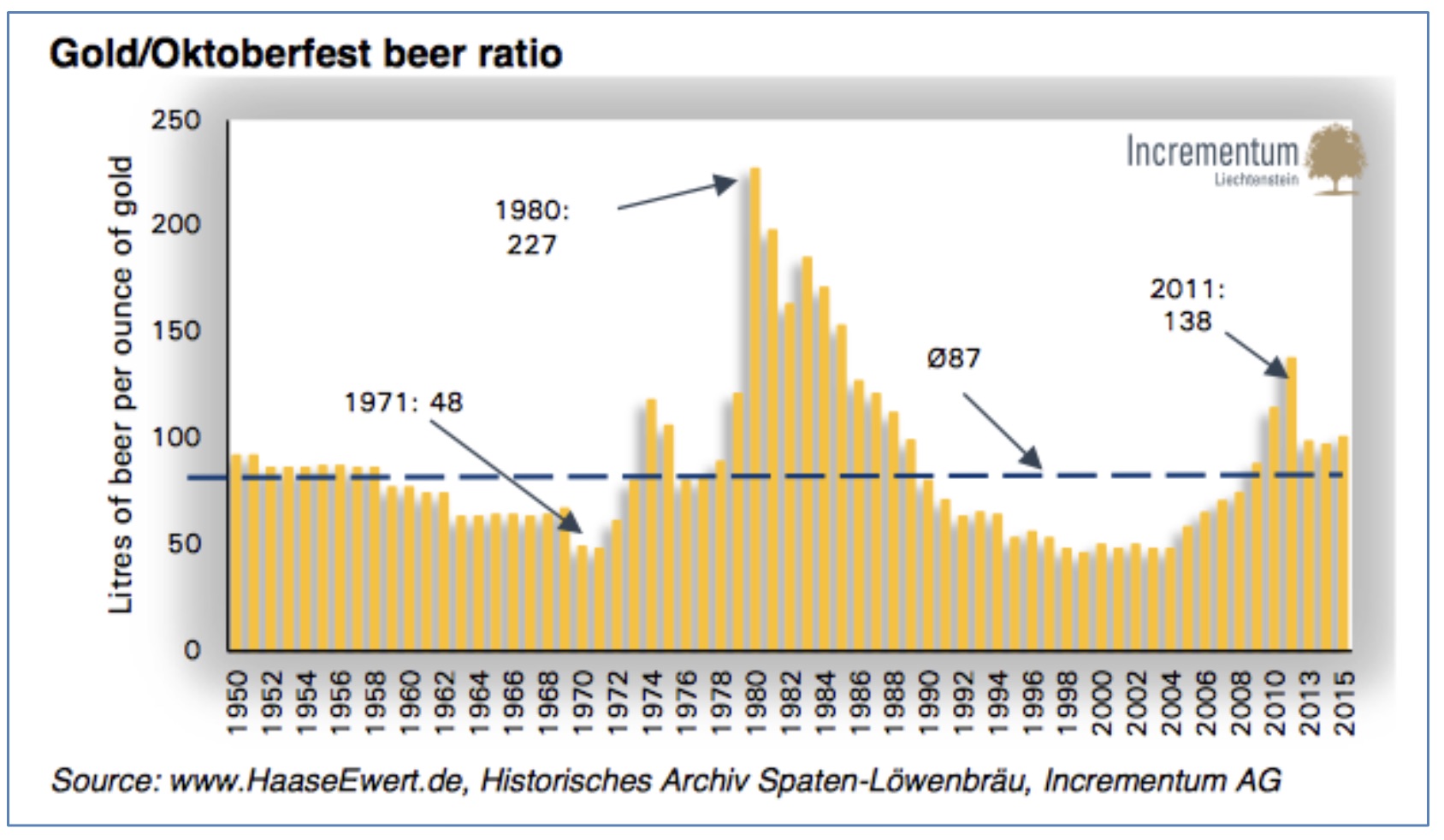 Conclusion
The evidence above shows that fiat currencies have historically been woefully inadequate at maintaining their purchasing power. Gold by contrast has a track record of successfully preserving value and purchasing power over thousands of years. In the course of human history, the market has naturally chosen gold as the superior form of money.

The slow and steady growth in its supply from mining (the global stock of gold is growing at approximately the same pace as the population) ensures stability and confidence. These unique characteristics are making gold one of the best hedges against excessive money supply expansion and Black Swan events.

And if you have an adversity to gold, you should consider picking up some Disney dollars. They have been excellent at maintaining purchasing power, as they sell for far above face value on Ebay. Anything is better than dollars.

***ALSO JUST RELEASED: After Trump Shocker, One Market Is In Freefall! And What Is Happening In The Gold Market Is Unbelievable! CLICK HERE.