After chaotic trading to open 2016, today King World News is featuring a powerful interview with one of the greats in the business that warns the worldwide crash is gaining momentum but the real terror lies ahead.

James Turk:  “There is one key financial measure that all KWN readers and listeners should be focused on throughout 2016, Eric, which is likely to be a momentous year. It is the US government’s interest expense burden. Worryingly, the overall state of the federal government’s financial condition is frightful…

James Turk continues:  “The federal government is walking on a precipice, and it is touch-and-go whether it falls into the abyss this year. If it does, a dollar collapse and hyperinflation will be the inevitable result.

That outcome may seem difficult to believe given how commodity prices have fallen. But consider that commodity prices are down because global economic activity has dropped, not because central banks are pursuing sound monetary policies that enhance the purchasing power of currencies.

70% Crash In The Baltic Dry Index
A global recession is causing a currency war in which central banks are debasing their currency to try to gain a competitive edge for exports, but this gaming of the international monetary system doesn’t work when all central banks are debasing the currency they manage. The 70% crash over the past six months of the Baltic Dry Index, which tracks the movement of major raw materials by sea, is clear evidence that a global recession is at hand, if not already underway. 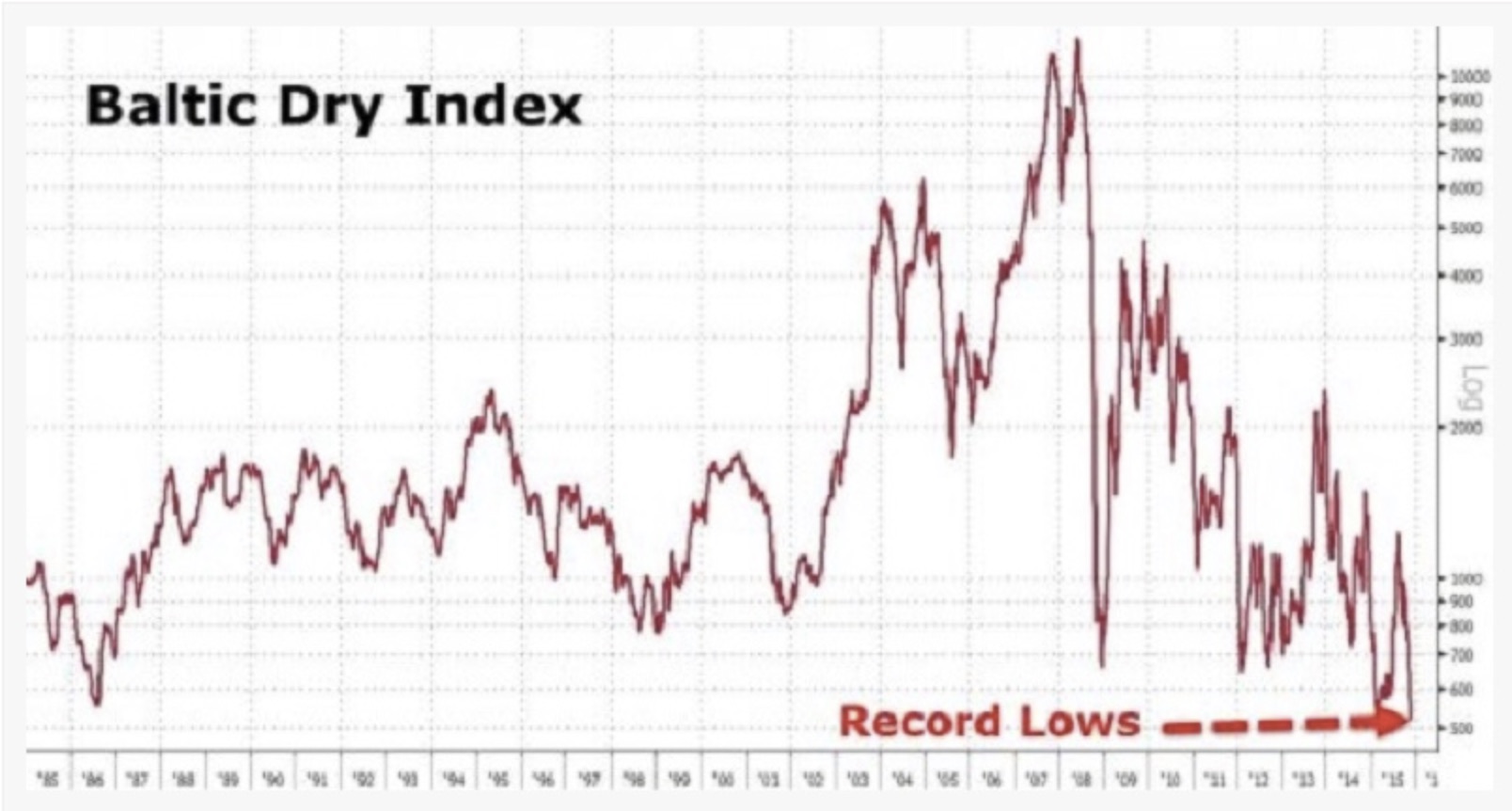 This collapse in economic activity is a result of too much debt. Debt was used to increase consumption in recent years, and now the piper is being paid. We are in the bust of a classic boom/bust cycle, but here’s the key point. It is not only companies and individuals with too much debt, but countries too.

The debt problems of Greece, Italy, Chicago and many other governments are well known. But it is the US federal government’s debt that concerns me most because the dollar is still the world’s most important currency in trade and finance, and history shows that a debt crisis and resulting financial bust can directly impact the value of a country’s currency. Alarmingly, the US picture is not a pretty one, as is clear from the following table.

At the end of fiscal year 2015 on September 30th, the federal government debt stood at $18.1 trillion, which is 5.6-times its annual revenue, compared to only 2.8-times in 2000. The increase in this ratio of debt to revenue means the federal government’s ability to service its debt is deteriorating.

What’s even worse, the federal government’s debt is soaring. It jumped a staggering $771 billion in the 3-months ending December 31st because of the sleight-of-hand the government used last year to stay within the then prevailing debt limit. That debt limit, one of the last restraints intended to keep the federal government from becoming over-indebted, has now been removed, giving the politicians a freehand to spend and borrow and then spend and borrow some more.

Zero Interest Rates And Skyrocketing Debt
Over the past several years the federal government was able to increase its leverage by such an extent for one reason. The huge decline in interest rates has lowered its debt burden, making it appear as solvent now with the greater debt load as it was in 2000 with the lower debt load.

I have prepared this next table to show what the federal government’s interest expense burden would be if the Federal Reserve had allowed interest rates to be normalized.

If the federal government were paying on today’s debt load the same interest rate it paid in 2000, which was 6.4%, the annual deficit in 2015 would be $756 billion higher just because of the higher interest expense.

It is obvious that the federal government would not decrease its spending in other areas to fund this additional interest expense, meaning that it would instead be borrowing $756 billion more, which would increase the national debt even more rapidly. That in turn would mean a yet bigger interest expense burden, even if interest rates did not rise.

But as the government’s creditworthiness deteriorated because such a large amount of its cash inflow from taxes and new borrowing was being used to pay interest on the national debt, lenders would demand higher interest rates because of the greater risk of default.

But here’s the rub, Eric. The dollar gets hit in either possible interest rate scenario.

Terrifying Hyperinflation
If the Fed allows interest rates to return to normal, the increasing interest expense burden will force the US government to borrow even more, putting it into a vicious cycle where it is borrowing just to pay interest on its debt. That leads to debased currency and hyperinflation.

If the Fed does not allow interest rates to rise, the dollar will still be sold as its holders looked for alternative ways to protect their purchasing power because near-zero interest rates are destroying capital. As the demand for the dollar collapses, dollars will flood into commodities and other tangible assets, with their prices soaring as a consequence, again leading to hyperinflation.

The upshot of all this is that Federal Reserve’s near-zero interest rate policy has enabled the federal government to continue borrowing and spending without any negative repercussions to the US dollar – so far. But that is about to change, regardless whether or not the Fed raises interest rates further because demand for the dollar will fall in the months ahead.

As demand for the dollar falls, the prices of commodities will soar as people exit the dollar into tangible assets of all sorts, and not just paintings, antique cars and real estate in perceived safe haven countries that so far have been the main tangible assets to see price rises as a result of of Fed policies.

So the fundamental point to make, Eric, is that sovereign debt crises are the reason currencies collapse. The over-indebted government refuses to balance its budget, and then forces the central bank to issue more currency by buying the government’s debt for which there are no buyers in the market, or alternatively, to force interest rates to artificially low levels to prolong the day of reckoning.

In fact the Fed did both of these things. It bought US government debt to force interest rates lower, but regardless whether one or both actions are taken, the net result inevitably is the same.

Eventually demand for the currency declines and this falling demand accelerates when the currency reaches a tipping point, causing the currency to collapse and prices of goods and services to soar. The tipping point comes when the government’s interest expense burden becomes unmanageable, which is why it is so important for KWN viewers to watch this ratio in the months ahead. 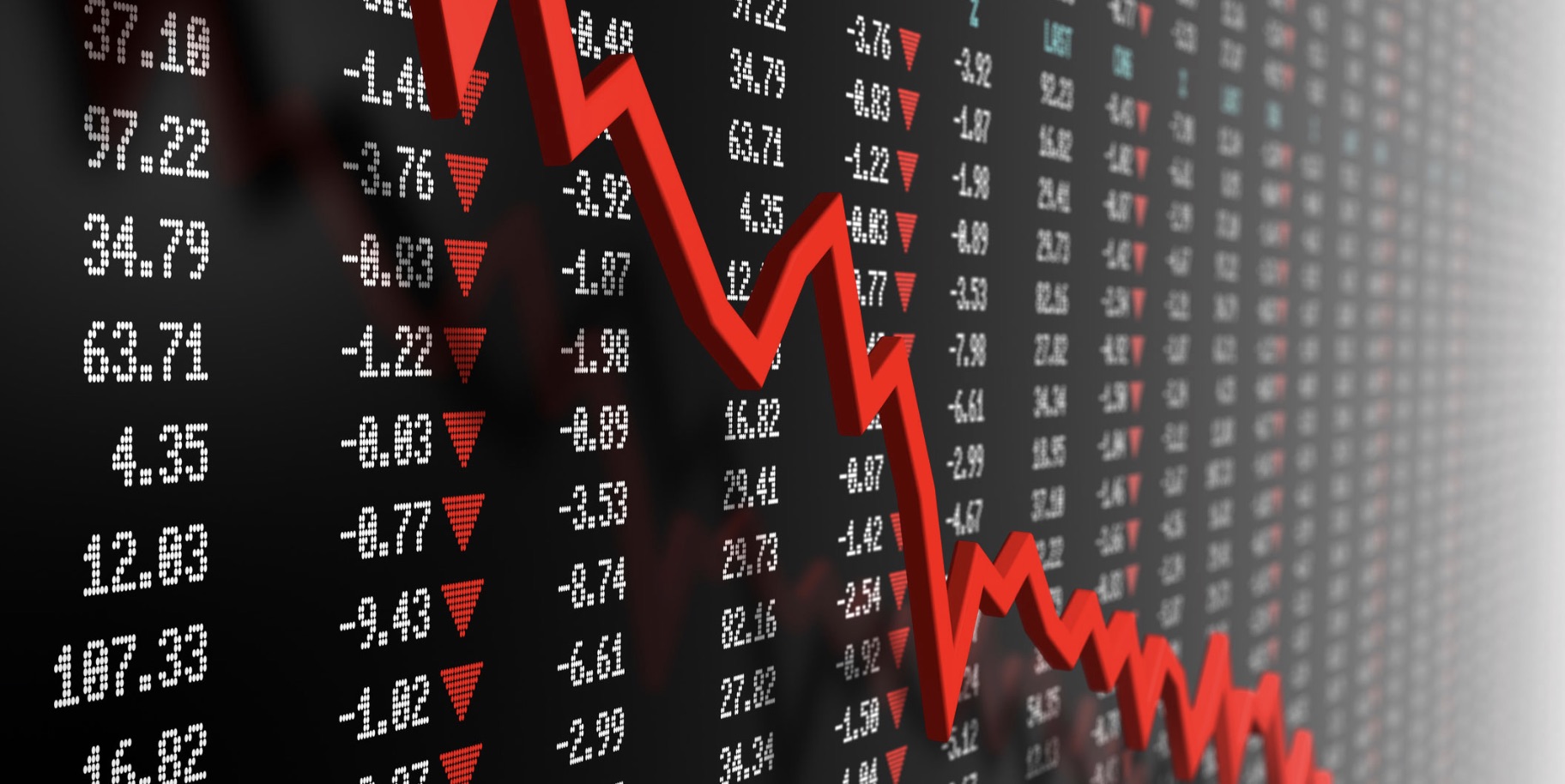 There is no logical reason why the dollar should have a different outcome. Some currencies of over-leveraged sovereigns just take longer to die than others, but monetary history shows they all eventually end up in the fiat currency graveyard.” ***To hear the powerful KWN audio interview with Nomi Prins, the keynote speaker who recently addressed the Federal Reserve, IMF And World Bank, CLICK HERE OR ON THE IMAGE BELOW.

***ALSO JUST RELEASED:  ALERT: Legend Warns This Will Be The Worst Crisis The World Has Ever Experienced CLICK HERE.