With continued uncertainty in global markets, today the man who has become legendary for his predictions on QE, historic moves in currencies, and major global events, warned King World News that the worst global crisis in history will be triggered in the next few months.

The Seeds Of The Worst Global Crisis In History
(King World News) Egon von Greyerz:  “This coming autumn, we are likely to see the beginning of the hyperinflationary phase of the sovereign debt crisis. Hyperinflation normally hits an economy very quickly and unexpectedly and is the result of the currency collapsing. Hyperinflation does not arise as a result of increasing demand for goods and services.

The course of events in a hyperinflationary scenario can be summarized as follows:

The above process turns into a vicious circle that accelerates quickly…

Egon von Greyerz continues:  “The more money the government prints, the faster the currency will fall and the faster the currency falls the more money the government must print. Once the hyperinflationary spiral has started, it will feed itself like we have seen in the Weimar Republic, Zimbabwe, Argentina and many other places.

What will exacerbate this process is a financial system which is totally bankrupt in all but name. If banks valued their toxic assets at market instead of at maturity, no bank would be standing today. As longer term government bonds start falling, this will also put upward pressure on short term rates with Central Banks losing control of their manipulation of rates. This will lead to rates going into the teens in the next 2-3 years like in the late 1970s. Virtually no borrower, whether public or private can afford rates just two or three percent higher and definitely not rates of 15% or 20%, which we are likely to see – at a minimum. Also, with higher rates, the whole derivatives market of $1.5 quadrillion will blow up since these instruments are all interest rate sensitive.

In a world of exponentially growing sovereign deficits and debts, the outcome of the biggest credit bubble in history has always been guaranteed. But the road there has been laborious. Through financial repression combined with lies and propaganda, governments and central banks have managed to extend the suffering for ordinary people for the benefit of a small elite, who has accumulated incredible wealth. The average person is, directly through personal debt, or indirectly through sovereign debt, responsible for the $230 trillion global debt but can of course never repay it. On the other side of the balance sheet, these debts have all accrued in the form of assets or wealth of a similar amount to an extremely small elite. This massive inequality is what creates social unrest and eventually revolutions, and the problems we now see emerging around the world are most likely the start of that.

The Destruction Of The World Financial System
Governments have, since the 1987 crash and the early 1990s property bubble desperately, tried to avoid the inevitable. In a panic, Greenspan lowered U.S. short term rates from 8% in 1990 to 2.5% in 1992, thus fueling the beginning of the final phase of the Fed’s 100-year destruction of the world financial system. Bernanke took over in 2006 when the subprime crisis started and he became the most profligate Fed chairman in history. During his reign, US Federal debt went from $8 trillion to $17 trillion and rates went from 5% to zero. It took the US over 200 years to go from zero debt to $8 trillion but Bernanke managed a similar increase in just 8 years. On top of that he printed enough money to quadruple the Fed’s balance sheet. 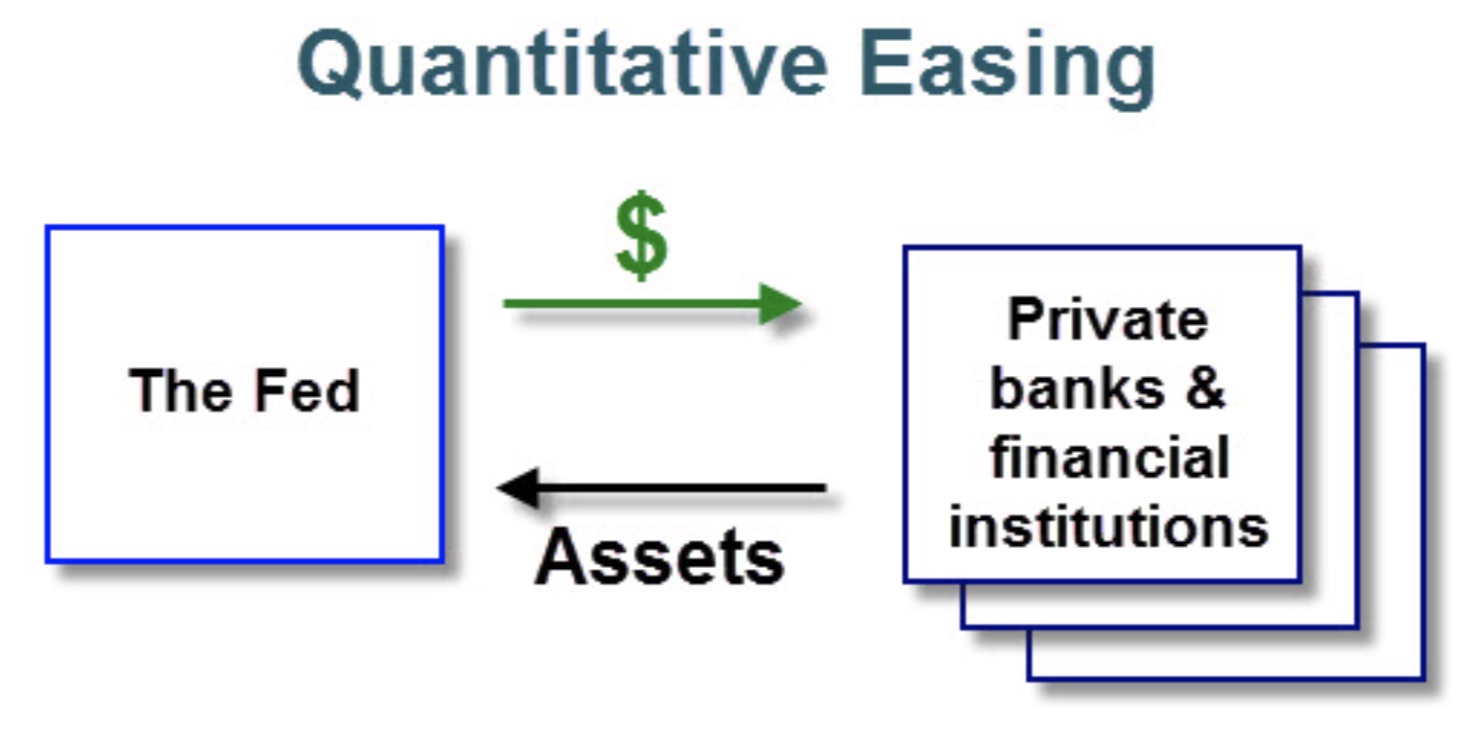 The Biggest Money Printing Bonanza The World Has Ever Seen
But these amounts will be totally insignificant compared to what Yellen or her successor will achieve. Because very soon, probably later in 2016, we will see the beginning in the biggest money printing bonanza that the world has ever experienced. Before that is over, we will not just see helicopter money being dropped but fleets of jumbo jets dropping quadrillions of dollars. As the global debt bubble reaches its climax, central banks will not just print money in an attempt to save sovereign debt and the financial system but also to cover unfunded liabilities and derivatives. This is what brings us to quadrillions.

Obviously no one will believe that this is possible. But very few people see that we have now reached the end of the road. Ludwig von Mises expressed this very articulately:

There is no means of avoiding the final collapse of a boom brought about by credit expansion. The alternative is only whether the crisis should come sooner as the result of voluntary abandonment of further credit expansion, or later as a final and total catastrophe of the currency system involved.

As I described above, the second alternative that von Mises outlines is likely to start soon, potentially later this autumn. Central banks in their futile attempts to save the world have been following their Keynesian ideals, cheered on by the likes of Krugman, and therefore refused to abandon further credit expansion. Instead they will soon start a credit explosion of a magnitude that will darken the skies with printed money dropped from above.

A Bankrupt World
What has always been likely to lead to the credit crisis blowing up is the fact that most major economies are bankrupt. For example, the US has not had a budget surplus for 55 years, Japan is buying 100% of the bonds they are issuing and printing half of their total government expenditure and the ECB is printing €80 billion a month but in spite of that most of the EU countries and all of the European banks are bankrupt. And still nobody has so far shouted that “the Emperor has no clothes”. This is simply because propaganda and indoctrination by governments have made ordinary people more interested in the latest iPhone, football or Pokémon GO rather than the dire state of the world economy. Instead, governments have printed more money and expanded credit exponentially in order to placate the people and buy votes.

Although the future is only totally clear in the rear view mirror, fundamental and technical factors now point to a sovereign debt crisis starting later this year.

With interest rates in most countries at zero or negative, there is only one way they can go. Just looking at US 10-year treasury rates, they are now at the all-time lows and similar to the level at the end of the WWII. Although US short term rates could go negative for a short period, long term rates are likely to turn up this autumn. We are now at the end of a 35-year cycle low for rates which should turn up later this year.

What might be difficult to understand for most people is that the stock market often rises quickly at the beginning of a debt crisis. This is normal at the beginning of hyperinflation as part of the printed money is invested in stocks. That is why a 40,000 Dow in the next few years is a possibility which would be a doubling of the US stock market from here. If the Dow/Gold ratio at the same time goes to 1 as in 1980, then gold would be $40,000. But I would expect this ratio to go lower and probably reach 0.5 which would mean gold at $80,000.

In both Australian and Canadian dollars, gold is now at the 2011 monthly closing high.

The trend is clear. Gold measured in most Western currencies, with the exception of the dollar, is now around the 2011 highs or just 10% below. It will not be long before gold in all currencies, including the dollar, make new highs.

To see what eventually happens in a sovereign debt and currency crisis, we only need to go to Argentina where gold is up 7,000% since 1999.

But since we are now facing the explosion of the biggest debt bubble in history, the consequences are likely to be of a different magnitude than in Argentina.  For the first time ever, every major nation in the world has a debt that will never be repaid with real money. The difference this time, compared to a crisis in Germany or Argentina, is that the magnitude is so enormous that there is no country and no central bank which can save the system.

This is why there will be a global money printing extravaganza that the world has never seen before. The dilemma is that a debt problem can never be solved by more debt so eventually we will see a deflationary implosion of the system. But before that, the dropping of money from the sky will lead to global hyperinflation that might look like the Weimar Republic. As the graph shows below, gold in the early 1920s went from 100 marks to 100 trillion. 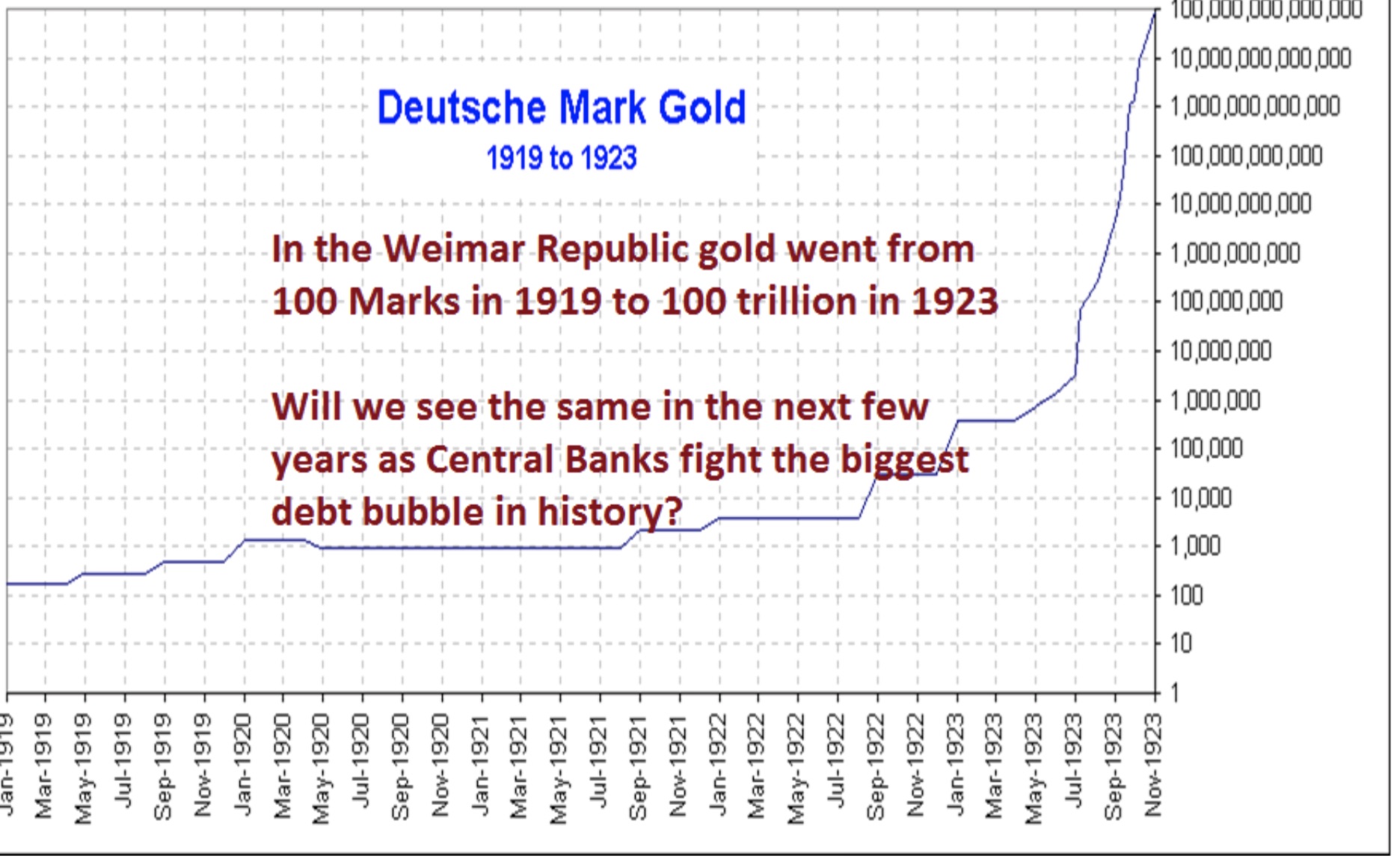 In this scenario, physical gold will at least maintain its purchasing power and also outperform all the bubble assets such as stocks, property and bonds.

Worst Global Crisis In History May Begin In The Next Few Months
If I am right that the global debt crisis could start in the next few months, right now is the last opportunity to buy insurance in the form of physical gold and some silver at bargain prices. There is virtually zero risk in holding physical precious metals. The risk of not holding them is a total destruction of wealth. Not a difficult choice really!”  ***KWN has now released the extraordinary audio interview with legendary short seller Bill Fleckenstein, where he discusses the short-term and big picture in the gold, silver, mining, and global markets, and you can access it by CLICKING HERE OR ON THE IMAGE BELOW.

Lowest Level In 8 Years, What’s Wrong With This Picture? Keeping The Bubbles Alive, The FedEx Signal, Plus A Look At Gold