On the heels of the silver ETF (SLV) tanking for the 14th straight day, here is where things stand…

Silver
From Jason Goepfert at SentimenTrader:  Silver can’t escape the sellers. The persistence and magnitude of selling over the past 3 weeks are nearing historic proportions, and it wasn’t that long ago that the metal was skimming along in an uptrend. Unlike what we see in most markets, selling pressure like the past few weeks were not consistent signals of exhaustion…

Silver Sucks
Yet again on Wednesday, metals were among the worst performing markets. Copper got hit the hardest, but gold and silver went along for the ride.

The persistence and magnitude of the selling pressure over the past few weeks ranks among the most vicious of the past 40 years. Wednesday’s loss was silver’s 7th in a row and in the past 13 days, it has managed only two positive days, both of which were minuscule. It has closed below its lower Bollinger Band every day for the past 7 sessions, tied for the most ever. 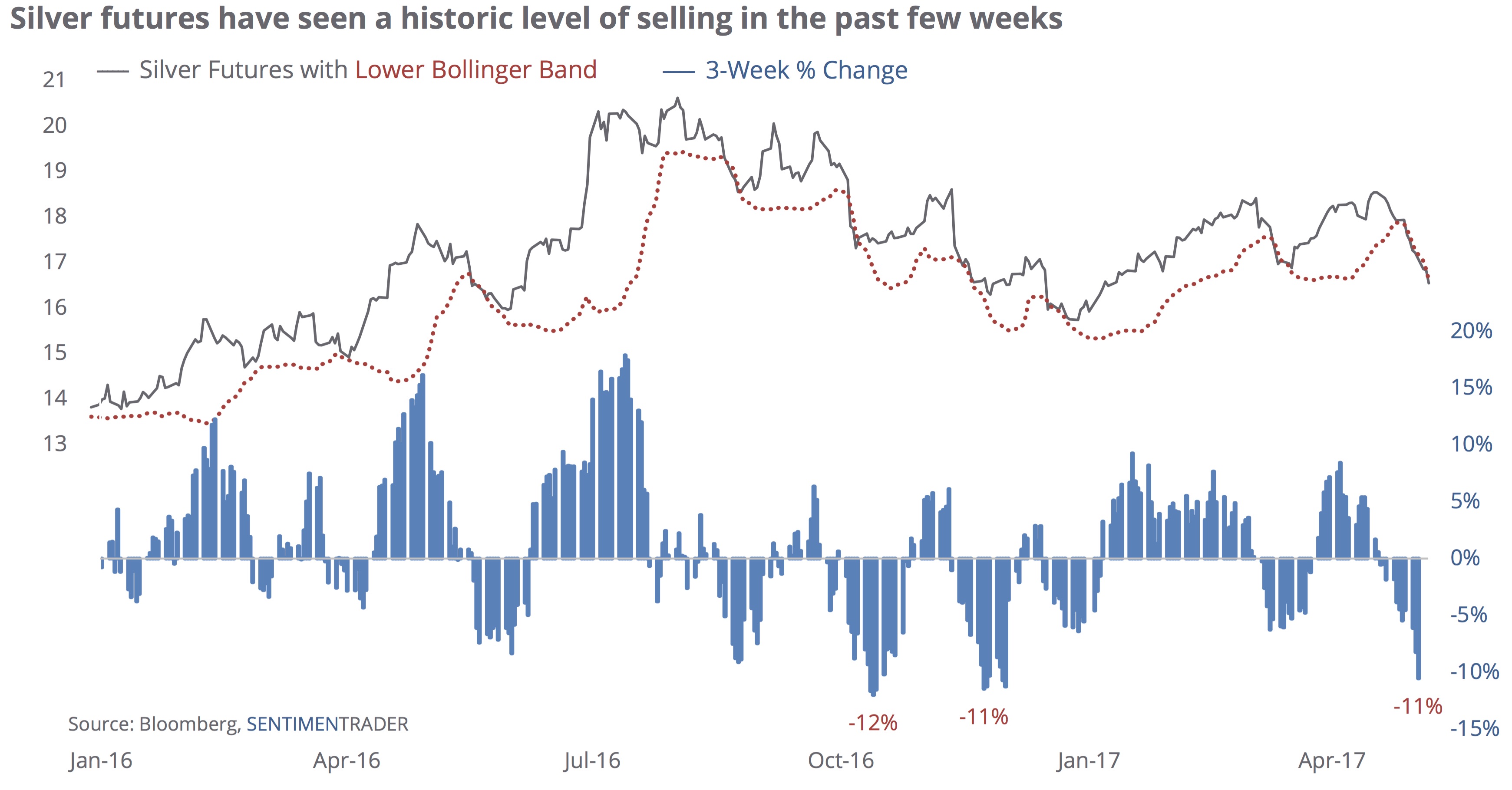 Almost always when we look at price action like this, it’s a sign of selling exhaustion, at least on a short- to medium-term time

frame. That’s not so much the case with silver.

…When silver closed below its lower Band for at least 6 straight days, it didn’t consistent signal exhaustion. There were only 4 occurrences, but even so, such extraordinary pressure would typically lead to consistent rebounds in some time frame. Not here.

When the metal went from above its 200-day average within the past two weeks, to at least 7% below it, silver’s returns were terrible. The next two weeks were fine – 9 rallies out of 12 attempts – but three months later, it sported a positive return only 3 times, and suffered a horrid average return and risk/reward profile.

Not helping matters are that hedgers remain among the shortest they’ve ever been against silver, and it’s in the midst of its worst seasonal period. There isn’t anything we can find that shows a positive risk/reward setup here.  ****On Friday King World News will be releasing an interview with London metals trader Andrew Maguire covering the carnage in the gold and silver markets.