In the aftermath of last week's historic Swiss move, today the Godfather of newsletter writers, 90-year old Richard Russell, proclaimed that the gold bull has just spit in the Fed's face by breaking out of its massive base, even as the worldwide depression continues to grind on.

Richard Russell:  “The world depression has settled down on mankind. In the meantime every nation is struggling to cheapen its currency. One way of doing this is that central banks are creating new trillions of assorted world currencies. It’s rapidly dawning on the wealthy one percent that the fiat currencies they hold are fast becoming worthless. The worst of the fiat currencies have suddenly come into question. The reaction of big money is to swap their garbage currencies for the only currency that has held its worth in all of history – gold.

Already you can feel the sweep of the new rush into gold. The base is now complete for the resumption of the bull market in gold.

Below is the chart that every follower of truth in money has been waiting for. It’s the big breakout from the three-year correction in gold. The chart is telling us that the great base in gold has been completed. Gold has broken above both of its moving averages and is spitting in the face of the Federal Reserve. 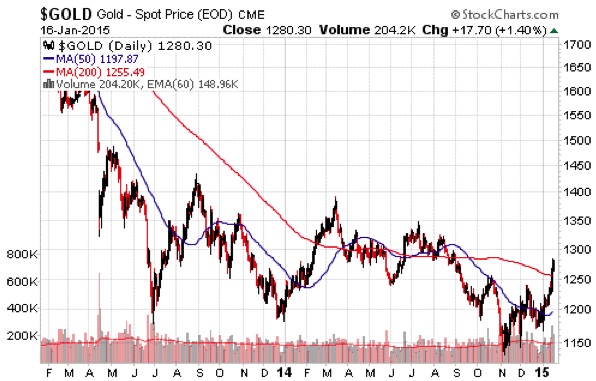 The chart below shows the widely followed Philadelphia Gold and Silver Index. Here again, we see the surge off the double bottom as XAU heads for its 200-day moving average. 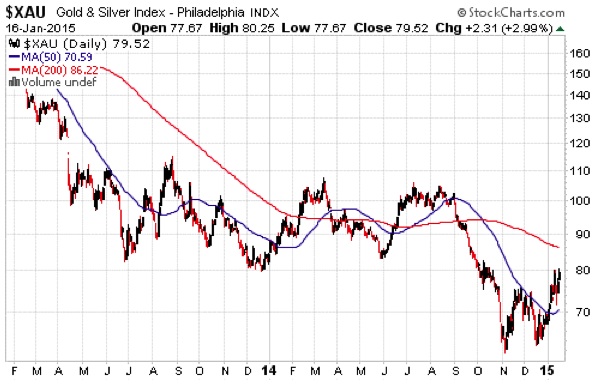 Next chart, CEF. Below, the stock that I have recommended over and over again, CEF, owns actual physical silver and gold, out of the US and in Canada. The chart shows the sudden upside explosion in CEF, and notice the sudden upside volume in the move. 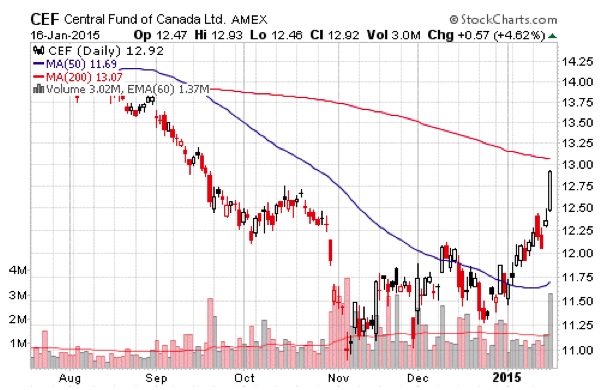 Late Notes — Years of QE has loaded the world with a variable notion of fiat money. The avalanche of fiat money will be lighting a fire under the world’s stock markets.

Owners of fiat money see the chance of buying real, trustworthy money (gold) and will be moving heavily into gold as the days pass. As I write now, gold is up $14 to 1294.70.  I think it will only be days before gold hurdles resistance at 1300 and moves to new highs.

At the same time, the Dow is only a handful away from 18,000, and could easily rally to new record highs. The Transportation average, helped by the collapse in oil prices, is up 97 points.

If you’re now holding cash, which is only fiat money, this is the time to switch to honest money, the only money that has held its value throughout the centuries — gold. Again, I recommend buying CEF as an extra precaution. I don’t know why more people aren't aware of CEF, except for the multiyear campaign of anti-gold propaganda by the Fed and the government.” To subscribe to Richard Russell's remarkable writings at Dow Theory Letters CLICK HERE.