With the dollar sliding along with stocks, gold, silver, and bonds, the following piece will shock you. It is from the front lines of a bankruptcy firm and the stories that are shared about the clients seem unbelievable, but they are true, and they are a testimony of a world that is now drowning in debt.

By Scott Terri, estate administrator at Cooper & Co. Ltd, insolvency trustee in Toronto)
May 4 (King World News) – On any given day now you can expect to hear at least one economist, public official or financial commentator express grave concern about the mountain of debt Canadians now carry. The bloated debt loads of Canadian households has become a pervasive topic in media. But for all the attention the subject has received, it’s a safe bet that most people still cling to very clichéd notions that only so-called “deadbeats” ever hit the debt wall. Nothing could be further from the truth. The reality is Canadians would be shocked if they could peer into the private financial lives of many of their closest neighbours and friends…

Continue reading the piece below…

As a licensed insolvency trustee firm, our practice is on the front lines of Canada’s household debt binge and the bad personal finance habits that ensnare so many people. And what we see every day is that the majority of those grappling with serious debt trouble are the most typical individuals and families you could imagine.

Stories Of Bankrupt Clients Hard To Believe
Here is just a sample of recent files that have crossed our desks: A staff accountant with multiple lines of credit, several maxed-out credit cards, a big mortgage, a significant home-equity line of credit (HELOC) and two leased luxury cars; a TTC driver with two mortgages and $100,000 in unsecured lines of credit; a teacher with eight payday loans and a senior financial analyst at a chartered bank with seven credit cards, all carrying high balances. I could go on and on.

Those disturbing financial cases are no longer the extreme end of the spectrum that they were at one time. They are the “new normal” in our trustee practice. The real horror stories are far worse, albeit less frequent.

The normalization of excessive debt is reflected in the data that Statistics Canada regularly releases. The household debt-to-income ratio now stands at 169.4, up 23 per cent from a decade ago, and on par with what the U.S. saw at the peak of its housing bubble. Of course, such figures are averages. According to the Bank of Canada, close to half of all high-ratio mortgages originated in Toronto were to borrowers with loan-to-income ratios in excess of 450 per cent.

Middle Class Has Become The Debt Class
“A growing number of the clients we see have all the trappings of a middle class lifestyle—they’re gainfully employed, own a home and from the outside seem fiscally responsible—but it’s built on a foundation of debt and bad financial decisions. Many cases involve large tax arrears, such as a real estate broker who owes $383,000 to the Canada Revenue Agency in unpaid income tax. Others involve failed businesses. Then there are the frequent cases where financial companies inexplicably lend vast sums to underemployed people, even as their debt loads balloon out of control—in one case, a senior who emigrated to Canada 15 years ago, had never worked and been on a very low disability pension since shortly after arriving, owed more than $200,000 in credit card debt.

While the causes for these horror stories are varied and obviously complicated, there is almost always a common detail: Most clients in significant debt trouble today would not be in that situations had they simply funded their lives by cashflow instead of credit. 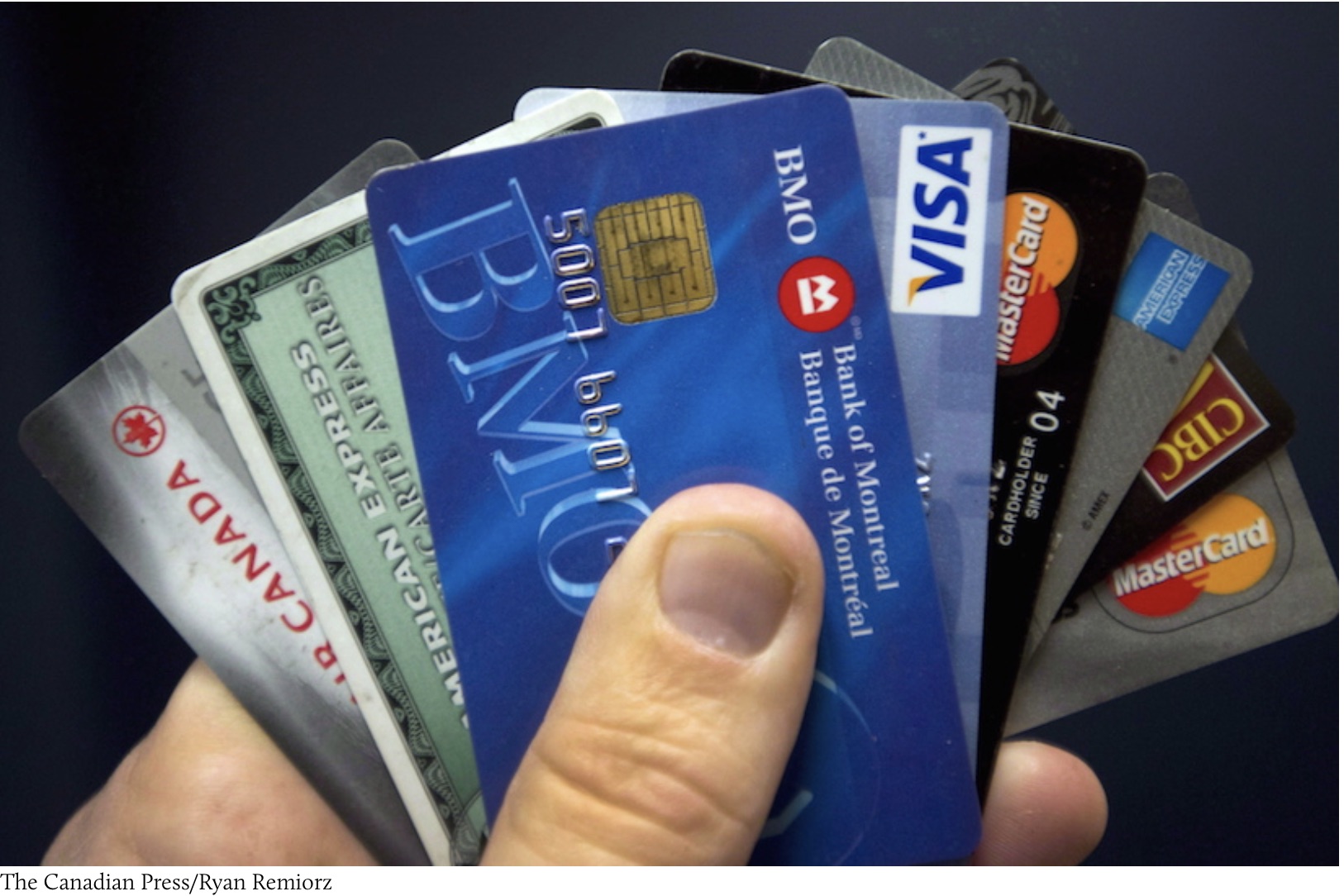 And that may be the crux: a decade of low interest rates has fuelled habitual credit reliance by consumers. Two or three decades ago, it would have been unthinkable for people to hold the equivalent of $30,000 or $40,000 (or more) in credit card debt. Yet now that has crept into the Canadian psyche as just something one does.

It Will Take A Lifetime(s) To Pay Off
(By the way, have you noticed the “Estimated Time To Pay” wording on your credit card statement? It is a calculation of how long it will take to pay off your credit card balance if only the monthly minimum payments are made. The record we’ve seen is 330 years and 10 months. Don’t forget, a credit card balance of as ‘little’ as $6,000 can take more than 40 years to pay off if only the minimum payments are made.)

Let me share a scenario of someone who is self employed, as it highlights how a debt problem can spiral out of control quickly. I met recently with a woman in her 50s who owns her own company that furnishes and decorates high-end businesses, like big law firms. Or at least it did. With big firms shrinking to meet reduced market demands and trimming costs, her business had dried up.

“Her Accountant Brought Her To Me…”
Her accountant brought her to me, and it was clear she had severely mismanaged her business and financial affairs, despite her accountant’s warnings. We see this all the time—small business owners are typically very good at what they do, but very poor at handling day-to-day administration.

Here are some specifics that show how misaligned her lifestyle and business expenses were with the actual cash she was earning:

• She had previously refinanced her house to help fund her business

• She had a prior bankruptcy 15 yrs ago—discharged

The CRA lien is the big problem here. She can’t sell or refinance her house with the existing lien unless she pays her back taxes, while in the meantime interest charges and penalties pile up.

Although this may seem hopeless, it is actually a straightforward personal bankruptcy scenario: She closes the business, any source deduction or HST owing is included in the personal bankruptcy filing, as are any personally guaranteed business debts. She walks away from her house and cannot be sued for any shortfall due to the creditor protection afforded by her bankruptcy. She will lose her house and business, but that almost certainly would have happened regardless.

I should point out that clients in this type of situation often insist on keeping their house, a reflection of the deep-seated Canadian devotion to home ownership, and it takes long and difficult conversations with family, friends and trusted advisors before they come around to the realization that they have to let go of their home.

This Is The New Normal
Keep in mind that the above situation is very normal for us. This is something we see every week.

As stated earlier, the most troubling trend we see now is the flood of regular Canadians facing financial crisis. Households and individuals who are employed, have decent incomes, own homes and have done everything they feel they ‘should’ be doing now find themselves facing serious, if not insurmountable, debt problems. They are having to file insolvencies now, or will in the next few years.

There are possible alternatives to outright bankruptcy, of course. Often, if clients have serious debt problems but also decent incomes, they will attempt a consumer proposal to settle their debt legally through a licensed trustee. In effect, creditors agree to accept just a portion of what they’re owed (which is more than they might get if someone is forced into a personal bankruptcy situation). This allows people to keep their assets (house, vehicles, investments, cottage, etc.) while eliminating unsecured debt they would otherwise have little chance to pay off in the normal course of life. The credit impact in a proposal is easier than a bankruptcy, and one can rebuild credit in a few short years. It’s a growing option for debtors. In fact, about 50,000 Canadians file proposals every year, and that number is rising.

Increasingly, life has simply become too unaffordable for many. The temptation to spend is too great, and access to cheap debt too easy. When the gap between what people need or want, and what they can afford with their incomes becomes too great, credit is used to fill the gap. Interest kicks in, and the cycle begins. As credit card debt is shifted to readily available lines of credit, $5,000 becomes $15,000, and soon you’re facing a $50,000 or $100,000 debt problem. A person living at or below the median income range simply cannot handle this.

Unfortunately, that’s a lot more ‘normal’ than you think.

King World News will shortly be releasing an interview with London metals trader Andrew Maguire covering the carnage in the gold and silver markets.