With the Dow falling more than 330 points, today legendary Marc Faber warned King World News that there are 3 reasons why this global collapse will be much worse than 2008 – 2009.

Eric King:  “Going back to the 2000 – 2003 unwind, nobody knew that the central planners of the word were going to come in with all this quantitative easing — the insane money printing and these ridiculous policies — but it’s unfolded that way.  There was going to be this great cleansing of the system, and part of that has unfolded, but they (central planners) have postponed it repeatedly through these insane monetary policies.  Are we at the end of that postponement?  Is the day of reckoning finally here?”

Problem 1 – Additional Liquidity Injections Will Have To Be Huge

Marc Faber:  “What is interesting in the most recent market decline is that the bond market is not acting particularly well.  And additional liquidity injection, first of all, it would have to be huge.  Asset purchases by the Fed of $80 billion a month, or say $1 trillion over one year, I don’t think would do the trick to really get the bull market (in stocks) going again….

“I think they would need to do much more (than $1 trillion).  They will talk to each other and it’s possible they will do more in coordination with Japan, the Bank of England, China, and the ECB.

But you have to understand (LAUGHTER) that we’ve reached a point where currencies have kind of depreciated in concert in real terms.  You can buy less assets with (fiat) money today than you could in the 1970s or 1980s.

Eventually this lack of purchasing power, because as you print more and more basically the money loses its value, has a very negative impact on affordability.  If you have a department store and you can’t move your merchandise, what would you do?  You lower the value of the goods you are selling and you hope to move the excess inventories and get rid of them.

But the Federal Reserve and the other central banks have made goods more expensive for people.  So they have even less chance to buy than before.  And this is one of the economic problems. 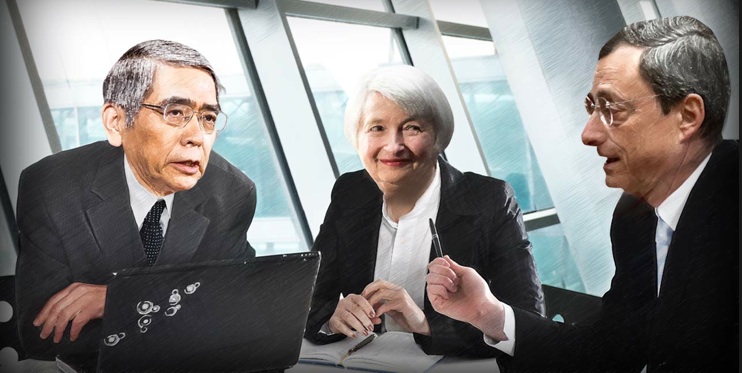 The second problem is while the Fed may be in a position to print money, the ECB and the Bank of Japan are in a very difficult position.  Because if Draghi and Kuroda print money, what then happens is the yen goes down and the euro goes down.  So in dollar terms global GDP declines.  And in dollar terms global trade declines.  So actually the more they will print in Japan and Europe, the less likely it is that they will have, globally, a strong economic recovery.

And the third factor I’d like to mention is this:  When China really began to grow strongly in the late 1990s, the Chinese economy expanded at that time in somewhere between 8 – 12 percent in real terms — inflation-adjusted.  Foreign-direct investments, capital spending, industrial production went up strongly, and incomes went up strongly.  And to satisfy all of these factors China needed to import industrial commodities.

So the Chinese demand drove industrial commodity prices higher around the world.  This was a very welcome change for the industrial commodity producers from Latin America, Africa, central Asia, the Middle East, Australia, and Russia.  So these countries became rich or more prosperous and they bough goods — capital goods and consumer goods — from China, but also from all over the world.

The catalyst was the rise of China and it went to emerging economies, and it then ricocheted into the advanced economies that sold them goods.  Now you have Chinese demand going down or no longer growing, commodity prices are falling, what happens to a country like Brazil?  They have commodity prices, falling retail sales, a GDP contraction and a very significant industrial production contraction.  It’s the same in Canada.

Money Printing Will No Longer Help

So these countries buy less from China, but they also buy less from Europe, the United States, and other countries.  And so you essentially have a cycle on the downside that is self-reinforcing.  And I’m not sure that money printing will help in this situation — actually it could make matters much worse.”

Eric King:  “What you are describing there is the central planners hitting the wall, Marc.  Where do we go from here?  Does that mean that the great cleansing is now in front of us, where we have that day of reckoning, and how bad will that be?”

Marc Faber:  “I would imagine, given the contraction in foreign-exchange reserves around the world, the contraction in China, the fall in commodity prices, and the very elevated debt levels that hardly anyone speaks about in the mainstream media — the fact is that global debts as a percentage of global GDP are now 30 percent higher than they were in 2007 (LAUGHTER), and we know what happened in 2007 (global collapse).

And this time… To hear the remainder of Marc Faber’s astonishing predictions on what will unfold next, listen to the audio interview that has now been released.  Faber discusses why this global collapse will be much worse than 2008 – 2009, what investors can do to protect themselves, what to expect in major markets, including gold, and much more, and you can listen to it by CLICKING HERE OR ON THE IMAGE BELOW.