John Embry:  “Eric, in my vacation enforced absence, the pressure on the gold and silver markets has certainly intensified, as the usual suspects move Heaven and Earth to ensure that sharply rising gold and silver prices don’t undermine the fake reality created by the Western central banks and their almost manic manipulation of the larger markets — stocks, bonds, currencies, real estate, etc…

John Embry continues:  “These markets have become historically misplaced  and as a result are very vulnerable if anything goes amiss in the central bankers’ massive Ponzi scheme.

The Most Underpriced Asset On The Planet
We now have silver open interest on the Comex at an all-time high, while the price of silver is several dollars lower than the last time this level of open interest was reached.  Think about it, Eric, silver is unquestionably the most underpriced real asset on the planet, and yet there is a cumulative short interest on the Comex representing considerably more than one billion ounces, which is materially more than one year’s mine production.

And unlike gold, a significant proportion of silver mine production is consumed annually in growing industrial use.  Thus, the only reason any parties would be short his amount of silver at these price levels is for manipulative purposes.  If silver were to suddenly reflect its true value, which I believe is closer to $100 per ounce, the price of gold would also explode upwards and these ludicrously low interest rates, which have been created to keep a seriously over-indebted global financial system afloat, would be revealed as totally bogus.  The implications of this would be catastrophic.  The bond markets would virtually collapse, a lot of seriously overpriced stocks would be re-priced sharply lower, real estate would be under siege as well as many of the world’s economies.  The impact of these developments on pension funds, banks, insurance companies, etc, would be devastating.  Thus, the powers that be will go to great lengths to suppress gold and silver prices until the very end of this saga.  Unfortunately for society as a whole, I think the end is rapidly approaching.

Looking at key economic sectors in the U.S., such as energy, retail, and the automobile industry, etc, suggests that the economy is stagnating at best.  At the same time, budget deficits remain elevated and the debt limit issue is coming to the fore once again. 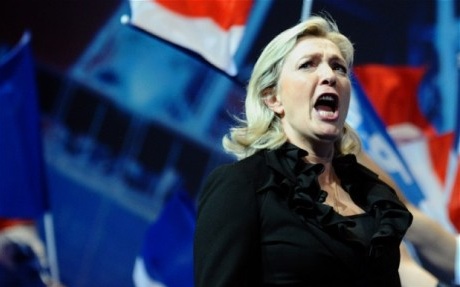 Marine Le Pen And The Death Knell of the European Union
Looking at ‘fake news,’ which seems to be a topic being discussed everywhere, the prestigious Economist magazine and the Financial Times newspaper are talking constantly these days about an economic rebirth in Europe.  In my opinion nothing could be further from the truth as that benighted continent is being kept afloat by massive financial intervention by the European central bank.  Perhaps these publications have another motive — to paint a very positive picture of the European situation in order to dissuade French voters from electing Marine Le Pen, which would be the death knell for the European Union, which in my opinion is long past its due date anyway.

The Bottom Line
At this point, investors have to be very patient and be heavily invested in real assets, the best of which are gold and silver bullion and the shares of the mining companies which extract them.  Pure paper assets with massive counterparty risks must be avoided at all costs.”