With the gold and silver markets consolidating recent gains, today James Turk spoke with King World News about what is going to trigger the price of silver to skyrocket.

The Trigger For Silver To Skyrocket
James Turk:  “Everybody should be watching silver very closely here, Eric. We are very close to a critical pivot point that I expect will set the primary trend of silver for months, and maybe years to come. In fact, the pivot point is already moving in silver’s favor…

James Turk continues:  “We’ve spoken many times before about the ongoing backwardation in silver. Spot silver continues to trade above front month delivery, which is presently September. Backwardations are an anomaly, and markets – even those rife with government intervention like the precious metals – don’t like anomalies. Distortions from normal conditions don’t last forever. The reason is that markets are bigger than governments or even groups of governments acting in concert. In other words, central banks can only push so far before market forces prevail, a limitation often described as ‘pushing on a string.’ We’ve seen many times in the past how markets have over-powered government interventions. It looks ready to happen again, this time in the precious metals. So the stage is set.

Right now the charts are indicating that markets are about to send silver soaring – and gold too – but I’d like to focus on silver. With the gold/silver ratio at 75, silver is more undervalued. This first chart is my long-term weekly chart, which is one of my favorites. It is also one that I have prepared for KWN readers many times over the years. 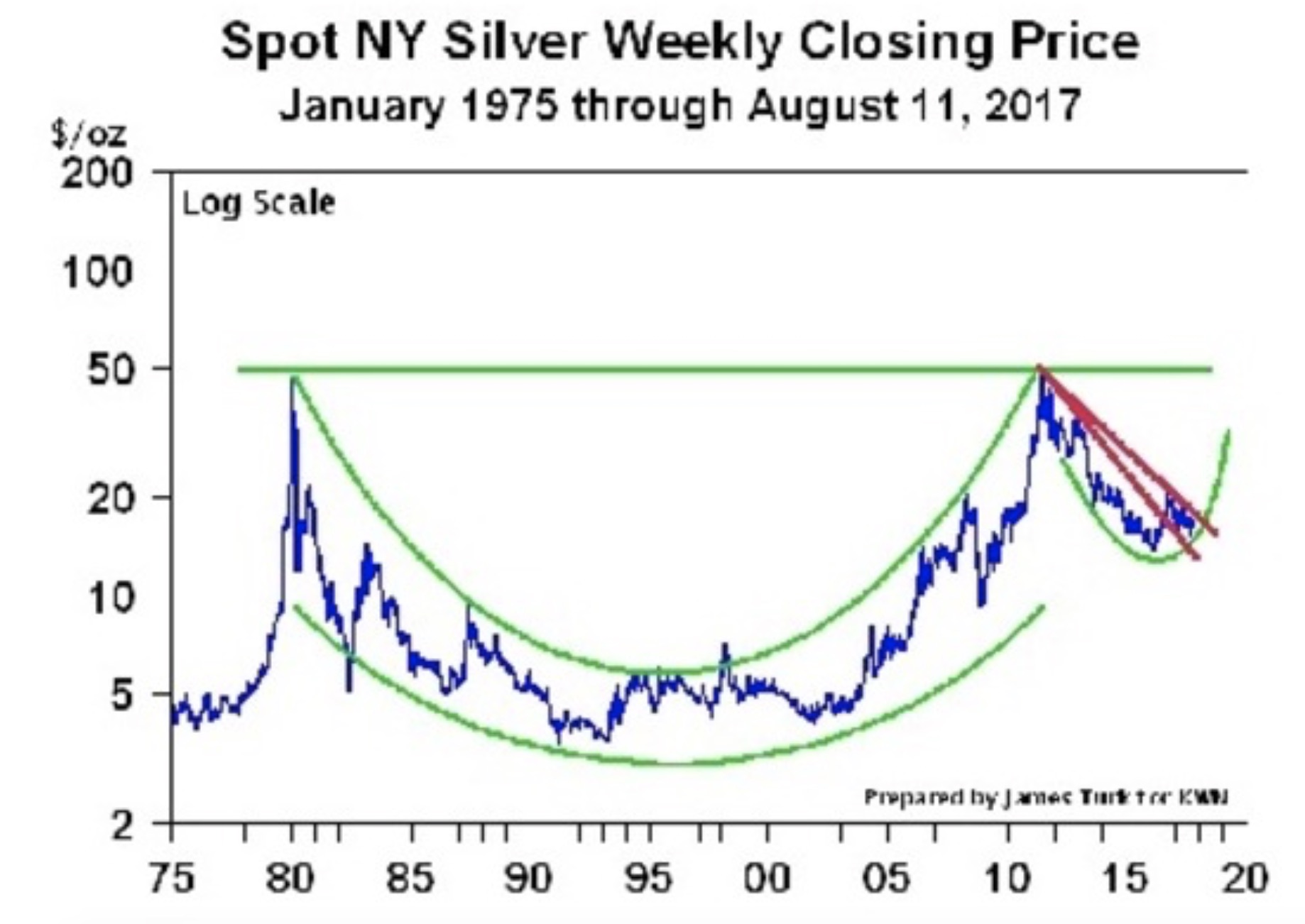 This chart is showing silver forming a massive multi-decade accumulation pattern. It is a ‘cup-and-handle,’ with the handle now in the process of being formed. Note the two red downtrend lines in the handle. Silver broke above the first one in its sharp rally last year, where the advance was halted. Silver then fell back into support. To complete this handle, silver needs to break above the second downtrend line, which hopefully will be its last big hurdle. When that second downtrend line is finally hurdled, I expect silver to soar like it did back in August 2010. What silver did back then was spectacular. From a low of $17.40 that summer, silver climbed to nearly $50 by the following April.

Importantly, silver is poised to take out that second downtrend line (shown above), which brings me to silver’s daily chart.

On this daily chart we can see that silver has etched out a reverse head-and-shoulders pattern, which indicates a trend change to the upside is underway. This base is big enough to launch silver into a meaningful rally.

Second, and more importantly, the head of this head and shoulders pattern was formed during a selling climax, which was the engineered ‘flash crash’ back on July 6th that stopped out a lot of leveraged traders and put them on the sidelines. This selling climax adds extra validity and importance to the head and shoulders pattern. So here’s what silver has to do. It needs to break above $18.50, which is its high from earlier this year. That’s the key pivot point, and $18.50 is just a chip-shot away.

The Trigger For Skyrocketing Silver
In that spectacular 2010-2011 rally, silver started breaking away to the upside in August 2010. With the head and shoulders pattern now formed, silver is repeating what it did back in 2010 with another August break-out. So I expect silver to continue heading toward $50 and touch it some time next year, and then it starts to get exciting. Silver is the only major commodity that has never exceeded its 1980 high price that concluded the inflationary 1970s. When silver finally exceeds $50, it will be breaking out of a multi-decade base to really begin its bull market.”