After a chaotic first day of trading to open 2016, today King World News is featuring a powerful interview with one of the greats in the business that include to remarkable gold and silver illustrations that will shock people.

James Turk:  “The results for 2015 are in, Eric, and as you can see from the tables below that it is a mixed outcome for gold and silver. It all depends on where you live and which currency you use to measure their price…

Looking first at gold, I have included 12 national currencies in the following table. There are the two major currencies, the US dollar and euro; 5 currencies from other major countries; and the 5 BRICS nations, Brazil, Russia, India, China and South Africa (note the remarkable average gains for gold in the last line over the past 15 years vs each currency). 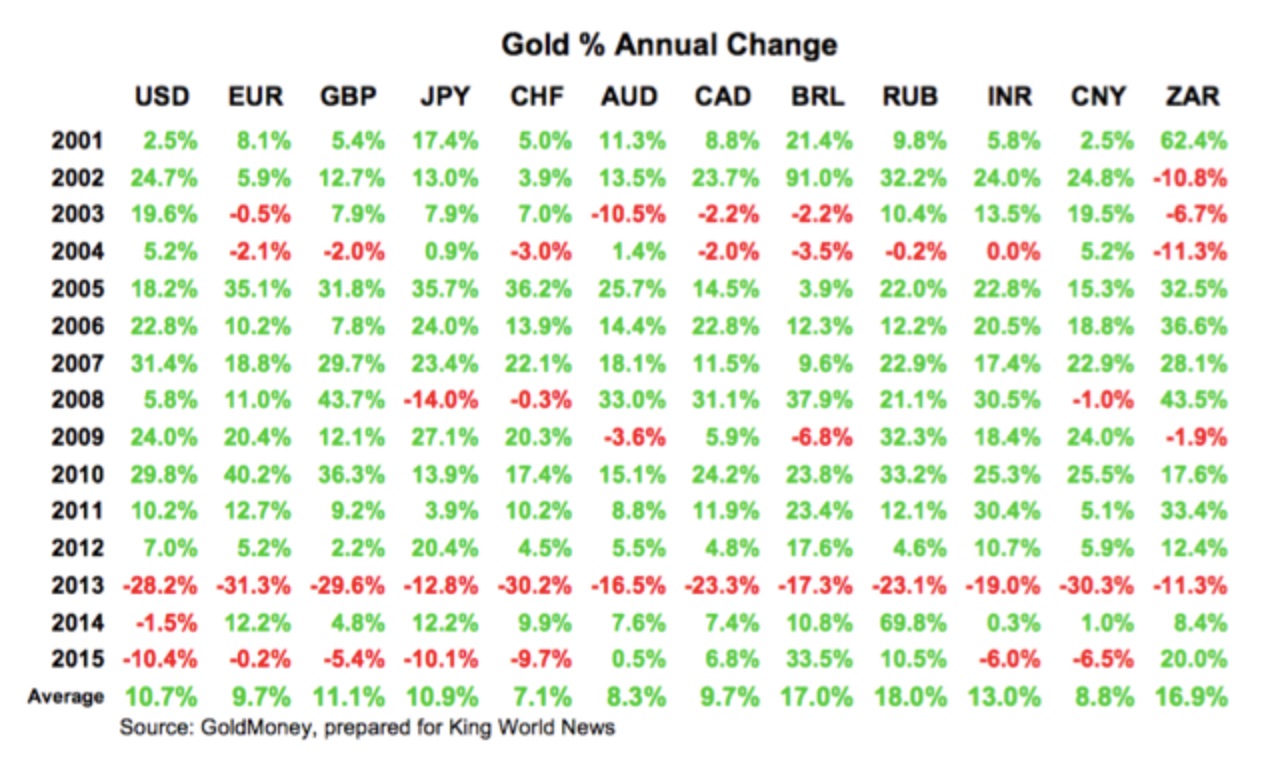 Gold was basically break-even against the euro, but down 10% against the US dollar and yen, and almost as much when measured in Swiss francs. But look at the BRICS. Gold rose 33% in terms of the Brazilian real and 20% against the South African rand.

These widely different results are not a result of any changes inherent to gold. After all, an ounce of gold today is no different than what it was a year ago. What has changed is the national currencies we use to measure gold. These changes have occurred because of central banks, their policies and their market interventions.

To explain this point, the US has been following a relatively tight monetary policy compared to other countries. For example, total assets on the Federal Reserve’s balance sheet have remained at $4.5 trillion for nearly 18 months, which is very unusual compared to the Fed’s historical practice of regular year-on-year increases in total assets to expand the money supply.

In contrast, the ECB has been expanding its balance sheet with its aggressive Quantitative Easing policy. So the net effect is that the ECB has been debasing the euro relative to the dollar, and this difference is illustrated by gold’s break-even result in euros and decline in dollar terms over the past year.

A similar conclusion can be made for a couple of the BRICS — Brazil and South Africa. They have been following loose monetary policies that debased their currencies. Note also that the results are pretty much the same for silver (see chart below and note once again the remarkable average gains for silver in the last line over the past 15 years vs each currency). 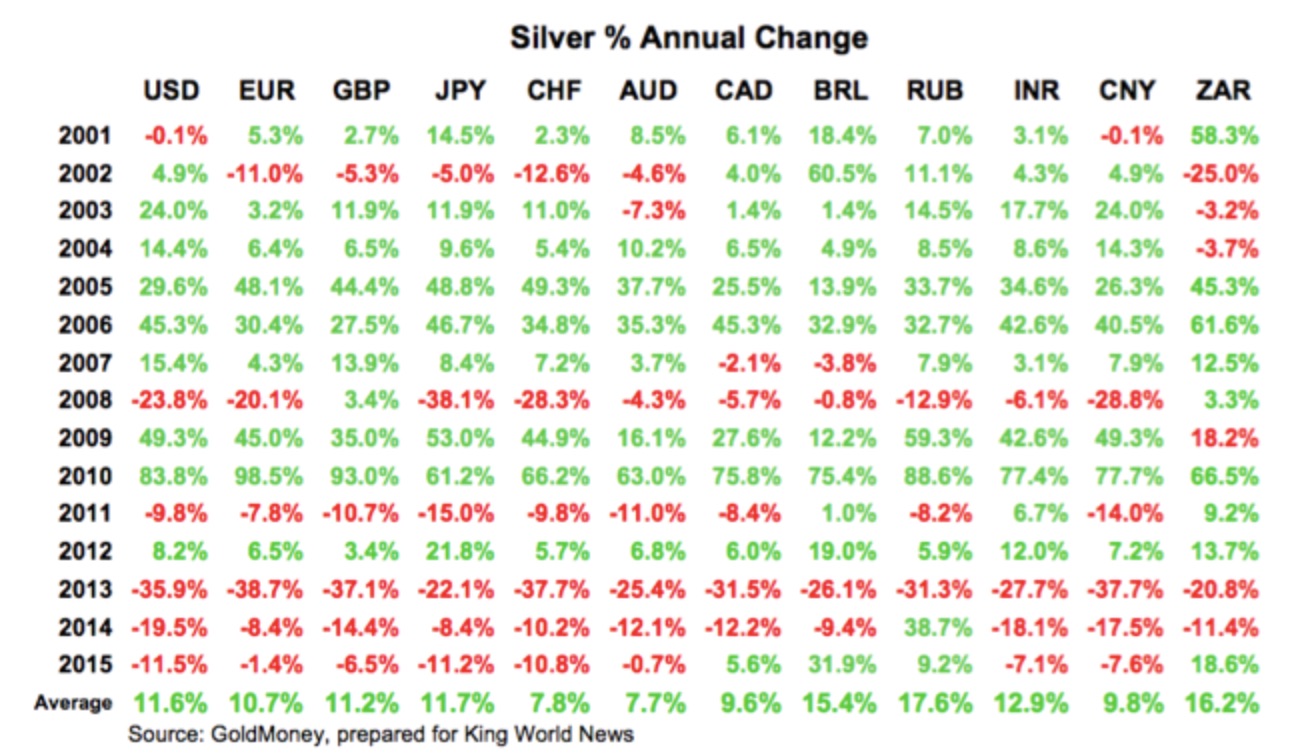 The only notable difference between gold and silver is that there is a lot more red on the silver table. It is a reflection of the fact that silver is a lot more volatile than gold, but the bottom-line results shown in the last row of each table establish that silver is not much different from gold. After all, they are both money, and just like an ounce of gold hasn’t changed over time, an ounce of silver also is the same as it was a year ago.

So the important point illustrated by the above table, Eric, is that holding national currencies is a crapshoot. It’s a guessing game about which currency to hold, but there is also another point to make. Today’s international monetary system is described as one in which currencies “float” relative to each other. This is true in the sense that they are no longer linked as they were up until 1971, with gold as the standard to which they were tied.

But look at the bottom row in the above tables. These results show how poorly central banks have been doing in managing national currencies. All the currencies fail to retain purchasing power. They are being insidiously debased, and these tables show that gold and silver are the best money to hold to protect yourself from this debasement.

Even with their recent underperformance, since the start of this century gold has appreciated at an average 10.7% per annum when measured in terms of US dollars, and in fact, is up double-digits against most of the world’s currencies. And I haven’t even included the tables basket-case currencies like the Ukrainian hryvnia, Argentine peso and Venezuelan bolivar.

You cannot earn anywhere near a return from interest income on a bank deposit compared to gold’s or silver’s overall appreciation over time. Plus, with banks you have the growing risk of being bailed-in and losing your money, as occurred in Cyprus, Greece, and more recently, with some regional banks in Italy.

So when deciding which money to hold and save, take a close look at the above tables before you make a decision. With central banks running amok implementing crazy theories that destroy the purchasing power of national currencies, and governments making depositors responsible for bad banks with bail-ins, gold and silver are clearly the best money.” ***To hear legendary Art Cashin’s stunning 2016 predictions CLICK HERE OR ON THE IMAGE BELOW.

***ALSO JUST RELEASED:  Chaos To Open 2016 A Major Warning For What Is To Come CLICK HERE.

ALERT: Shocking Situation In Gold, Silver, Copper, Oil And The US Dollar