It seems strange to us that after seven years of unconventional central bank policy, there is no debate as to whether these measures have any effect at all, respectively whether the situation wouldn’t actually be better without QE. The narrative of rising asset prices and a relatively painless way to supposedly sustainable growth is barely questioned.

Unconventional monetary policy is justified by an emergency situation and is only temporary. Or is it not? How simple is the often-promised return to “monetary normality” really? In this context, Japan is an example that proponents of monetary policy experiments would rather not look at too closely. The country is a “model student” of highly aggressive monetary policy.1 Zero interest rate policy has been de facto in place there for almost 18 years. Every attempt to hike rates came to grief within a few quarters and had to be rescinded again in embarrassment.

Japan thus demonstrates that the monetary policy measures held to bring salvation for many years already have failed, and an exit remains out of sight. Due to the zero interest rate policy, the government was able to amass such a huge amount of debt that a significant increase in interest rates has become illusory for good. If one asks Western monetary policymakers why the prescribed medicine has failed to have a sustainable effect in the land of the rising sun over the past two decades, the cynical explanation is that not enough of it has been taken. 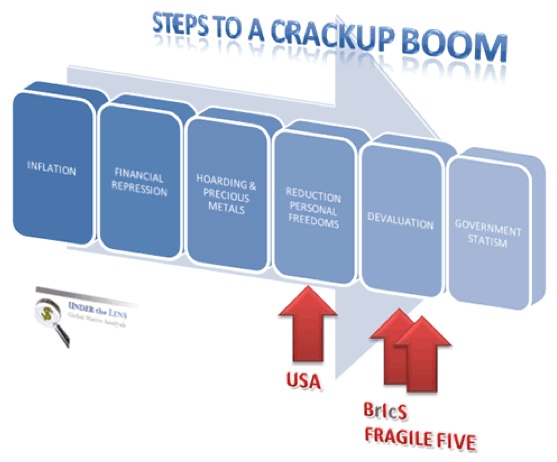 The sweet, contagious poison of currency devaluation has now – after Japan – also spread to the euro area. The expectation of a European dose of monetary aphrodisiacs has on the one hand led to a sharp decline in the euro’s exchange rate (from USD 1.40 to USD 1.06), as well as to a rally in European stock markets and a (final?) once-in-a-century rally in government bonds. We find this reminiscent of a classical crack-up boom. It gives us pause that the temporary, weak economic recovery resulting from the devalued currency tends to be lauded and is barely criticized. If the debasement of a currency could promote wealth and prosperity, Zimbabwe and Venezuela would have to be at the top of the world’s economic rankings and Switzerland at the bottom. As is well known, the exact opposite is actually the case.

Therefore, we have all become involuntary guinea pigs in an unprecedented monetary experiment, the economic (and sociological) outcome of which remains uncertain. Ever more frequently observable phenomena including asset price inflation, chronic over-indebtedness, extreme boom-bust cycles, but also the fragile interaction between inflation and deflation are symptoms of a problem with a systemic cause.

It seems obvious to us that the crux of the matter2 is the current inflationary uncovered debt money system. This system requires exponential inflation of the supply of money and credit. A consistent expansion of monetary aggregates in the traditional manner is no longer possible in the current phase. Consequently, the financial system finds itself in an increasingly unstable situation. 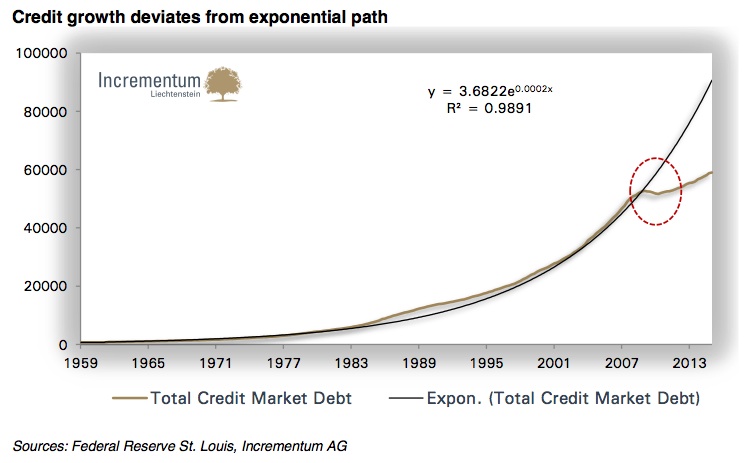 The endogenous addiction to money supply growth and rising prices is – especially in light of the over-indebtedness problem – a central pillar of our thesis that a turning point in the trend of price inflation is close. In the course of an interventionist spiral, ever more dubious measures are adopted by monetary authorities in order to force a reflation of the economy and higher rates of price inflation. These steps include interventions like quantitative easing, negative interest rates, financial repression and possibly even a cash ban.

Even though we know of countless deterrent examples that show that such aggressive money supply expansion ends with “too high” price inflation, this dangerous gamble is being tried yet again. Inflationary policy is always a desperate attempt to create artificial prosperity by means of the printing press, which, as any objective assessment shows, will never be sustainable. The perpetuation of zero interest rate policy suspends the market’s self-healing corrective forces and fosters the nurturing of new asset bubbles. Following the technology and housing bubbles, we are once again right in the middle of another asset bubble. While the previous bubbles were focused on individual sectors or specific market segments, we are currently in the midst of an entirely different bubble dimension. Government bonds are at the center of the debt money system and represent the majority of the assets held by central banks and institutional investors. All available means will be exploited to prevent this bubble from bursting.

A Loss Of Confidence And The Safety Of Gold

1 See “In Gold We Trust 2014”, chapter “Is Europe threatened by a Japanese scenario?” p. 41-43
2 In the German language, there is a nice saying expressing “crux of the matter”: “Des Pudel’s Kern” (literally: “the poodle’s core”). It comes from Goethe’s drama Faust, in which Mephistopheles appears in the form of a poodle. When he reveals himself, Faust remarks: “So that was the poodle’s core”. It soon became a winged word.

Greyerz – WARNING: We Are Now Headed For A Catastrophic Global Crack-Up Boom