Gold and silver have been on the move as we head into the final week of trading in May.

Silver Catching Up To Gold
May 22 (King World News) – Alasdair Macleod:  Gold consolidated recent gains this week, losing $3 from last Friday’s close to trade at $1738 in early European trade this morning. On the same timescale silver was up 50 cents at $17.09, 50 cents below its peak on Wednesday. 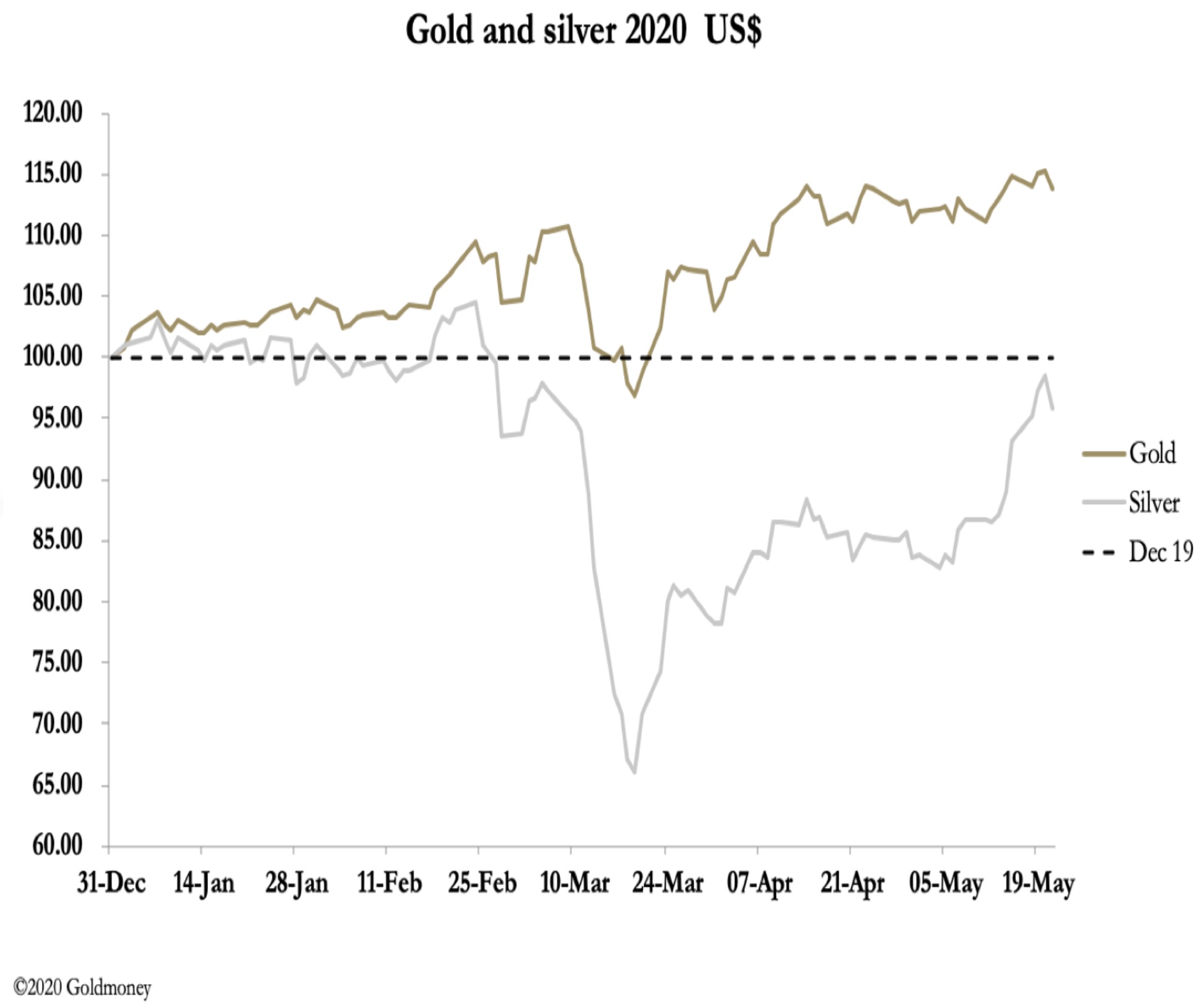 As our headline chart shows, silver has almost recovered its loss on the year, having rallied 44% from the March low. Its recent outperformance against gold has reduced the gold/silver ratio to 102, after topping 124. This is our next chart. 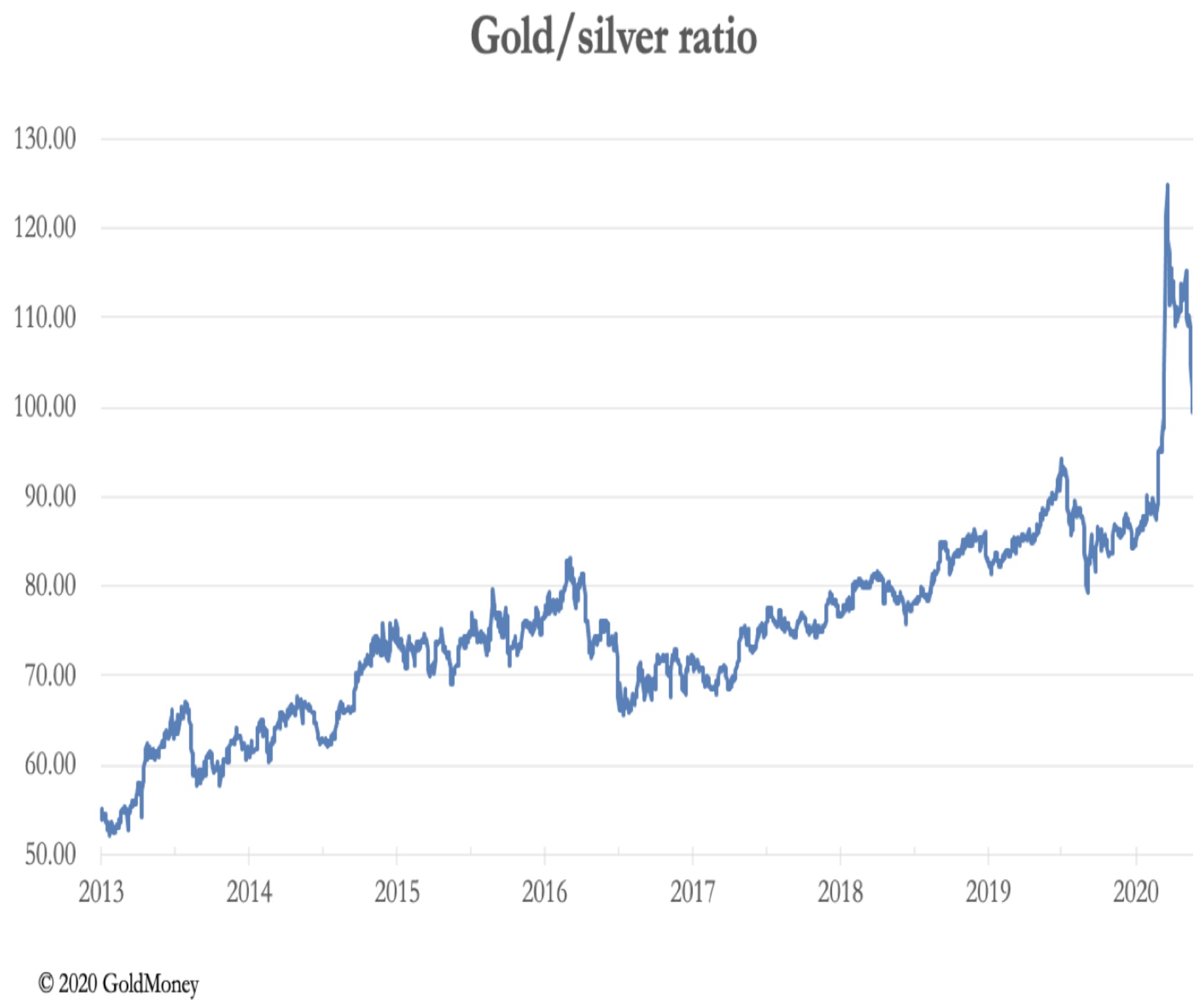 So far, the headlines this year have all been about gold, but now attention is embracing silver. The spike up in the gold-silver ratio in the chart above was a clear signal that a major turning point in favour of silver had taken place. That accepted, silver has become short-term overbought.

This is an excuse for the shorts in the bullion banks to knock the price and trigger some stop-losses. But as our next chart, of Comex open interest and the silver price shows, the bulls still have room to run prices much higher. 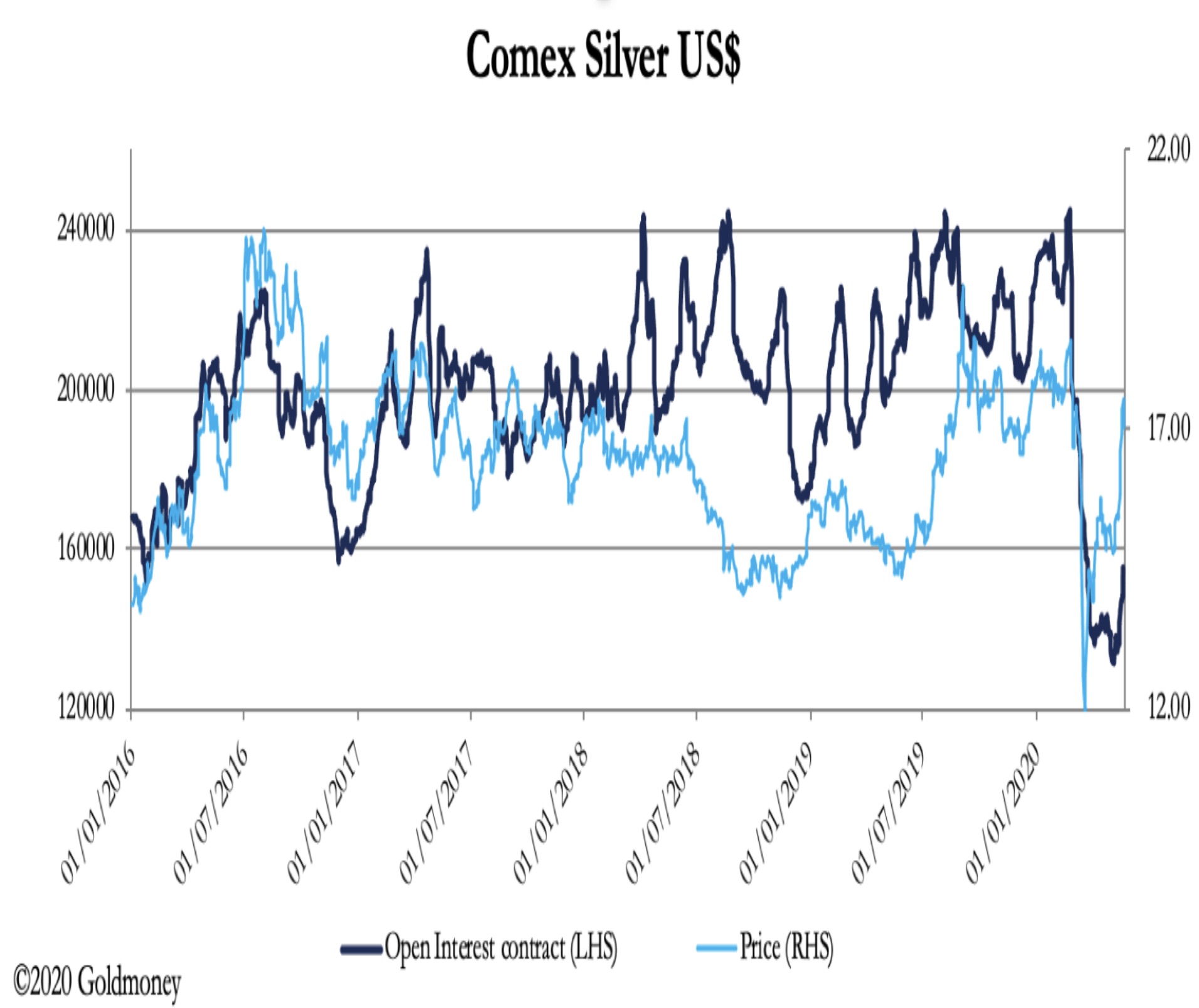 With open interest currently at only 155,000 contracts, an additional 70,000 contracts would be required to take silver into truly overbought levels. And notice how volatile the price has become on the upside for a relatively small increase in open interest. This is indicative of an illiquid market which in the right conditions can drive the price considerably higher.

The last monetary standard in Europe backed by silver instead of gold was abandoned in 1873, since when the gold/silver ratio has inexorably risen to today’s levels. There is simply no monetary role reflected in the price today. If, for a moment, we can assume the death of fiat and a reintroduction of a gold standard, then it would be sensible to reintroduce the circulation of high-grade silver coins. This was the role fulfilled by Maria Theresa thalers which was everyone’s money in the Middle East until very recently.

If silver is readopted in coinage, then the gold/silver ratio will reflect its monetary status again. So far, almost no one is looking that far ahead, only thinking of fiat inflation and perhaps hedging into gold ETFs. But we can begin to think in terms of developments that will drive the gold price from here, and therefore reconsider silver’s future monetary role.

1. No one seems to be thinking of systemic risk, but every economic downturn puts strains on the banks. The virus shutdown and the liquidity strains which were evident before it indicates a worse position than that of the Lehman crisis is in the making. Mounting systemic risk is bound to be a new factor driving the gold price.

3. The growing possibility that gold will return as money to replace fiat currencies raises the question over silver. Its role in coinage as a subsidiary role to gold will become obvious, by which time the gold/silver ratio should be moving back towards former monetary relationships.

“The coup of the decade!”
Bryan Slusarchuck:  The Fosterville South Exploration (FSXLF:OTC, FSX:TSXV) news that just was just released is very big deal but won’t be understood by the market for a few days in my opinion.