As we come to the end of a Fed decision week, here is an important update on gold and the mining shares.

Gold Sector Update
By Michael Oliver, MSA (Momentum Structural Analysis)
June 16 (King World News) – The action since December’s major corrective low has been positive, in the sense that from momentum’s point of view it’s built a nice, flat structure around the zero line.  Ripe structures usually imply intent. Meanwhile, price looks like it’s in a coiling action, with no clear intent of future direction (that’s what coils do – confuse)…

Now, for a moment, look at the momentum chart as if it were price, and use old, orthodox price chart analysis.  That says that if momentum closes a week above the flat horizontal at the second circle (an “ascending triangle” is the common term), then there will be a major  breakout, a momentum breakout (see chart below). 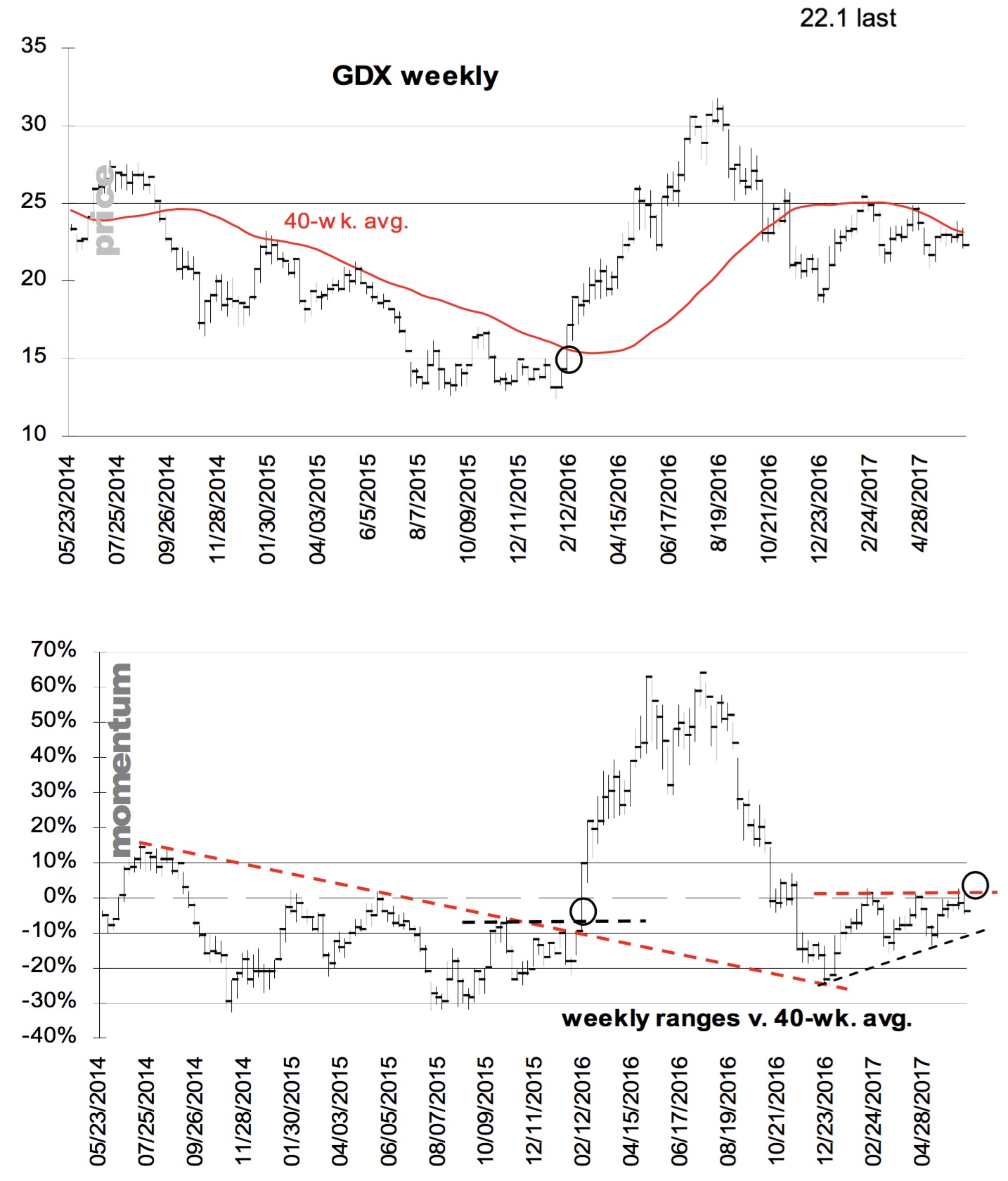 Back in late 2015 there was a massive down-trending structure, and in the second week of February it was broken out above, as well as a clear horizontal.  That 40-wk. momentum breakout coincided with the upside breakout by annual momentum (not shown here).  The result was a huge upside move.

The Sharp Counter-Trend Correction
Then came the sharp counter-trend correction.  As we explained with archival examples in the May 4th report on gold and gold miners (just ask if you’d like that report re-sent), this sort of in-your-face counter-trend move, following a major long-term breakout surge, is common.  It’s these sorts of counter-trend moves that test the emotions and mental certainty of the longs, thus removing many wobbly longs from the trend, such that when history later unfolds, they curse themselves for an improper entry level (based on price charts instead of momentum) and lack of commitment to the new trend.

While MSA can never claim certainty, we can claim when an annual momentum breakout occurs—and is not negated by the next long-term indicator (quarterly momentum)—that any move counter to the trend signal is probably a bluff.  Meaning GDX’s drop into the December lows last year (18.58) was probably only a major correction following a first wave of upside that came from the annual momentum trend buy signal.  It was a dying effort by the bear trend to reassert itself.  But annual momentum said, “Not likely.”

GDX & Gold
So now GDX—and gold—have been caught in a zigzagging nowhere land since the December 2016 corrective decline.  With this action occurring well above the December lows.  If, via price chart action, you can argue a conclusive outcome to this non-trending action, go ahead.  We can’t, and besides, we don’t trust price if it’s out of alignment with momentum.

We’ve defined the red horizontal as a secondary but major momentum buy signal for GDX.  And we strongly suspect it will be exploited as a secondary upside starting gate.  When that occurs (and the breakout weekly closing number gets lower each week), then the “corrective” process following the first major up-wave of the new bull market will be over.  It ended in December and all that’s followed is merely an effort by momentum to build a new starting gate, one that’s just above the zero line.  If that breakout occurs, then assume the corrective pullback in the bull market is done, and that upside is dominant once again.

The question has been asked, what if GDX breaks down instead?  Does MSA have an exit number?

Frankly, our methodology can only define a not-so-clear downside breakage level below the momentum action.  If broken, it might lead to more decline, but when that structure is compared to the structure just overhead, we’d bet on the resolution being through the horizontal, not the less impressive uptrend structure.

To conclusively break the uptrend line would require a price drop to around 20.70 and a weekly close there.  The current price is 22.1.  Meanwhile, waiting overhead is the major upside breakout level at 23.45 this week, and around 23.30 next week.

We Will Monitor And Update
We continue to monitor and will update.  But the dominant technical factor that we recognize and cannot ignore is that the annual momentum trend of gold and GDX turned positive in early 2016, and nothing since, even the sharp but routine correction of late last year, has altered that major signal.

Gold Remains Bullish, Despite US Dollar Rally, A Match Made In Hell, Plus What Could Possibly Go Wrong?