With continued uncertainty around the globe, today the man who has become legendary for his predictions on QE, historic moves in currencies, told King World News that a massive global collapse is coming.

Things Are Already Imploding
Egon von Greyerz:  “The U.S. owes the world 453,000 tonnes of gold, which is 3x all of the gold ever produced in history…

Propaganda And Outright Lies
While market observers worry about what the Fed will do next or the health bill, nobody sees that the United States is on the way to total ruin because they have been running budget deficits for over half a century and trade deficits for over 40 years. It seems that the US economy is walking on water, and this opinion is fueled daily by seasoned commentators like Ambrose Evans-Pritchard in the UK Telegraph. In a recent article, he uses selective data to prove that “The American strategic decline is a myth.” So here is another journalist who falls for manipulated statistics and focuses on the wrong things. For example, it is definitely not a proof of a strong economy that the Americans buy an enormous number of new cars which they don’t need. Especially since they do it with subsidized credit, leading to massive bad debts that will never be repaid. Nor are the deficits, falling wages, 23% real unemployment and falling real GDP.

There is only one reason why the US could live above its means for over 50 years and that is because the dollar is the world’s reserve currency. But how can the world trust a reserve currency which is based on unlimited debt creation and money printing. Since Nixon abolished the gold backing of the dollar on August 15, 1971, the US currency has had a precipitous fall. Measured in Swiss Franc, for example, the dollar is down 77% since 1971. And against the only money which has survived in history and money which represents stable purchasing power, gold, the dollar is down 80%. 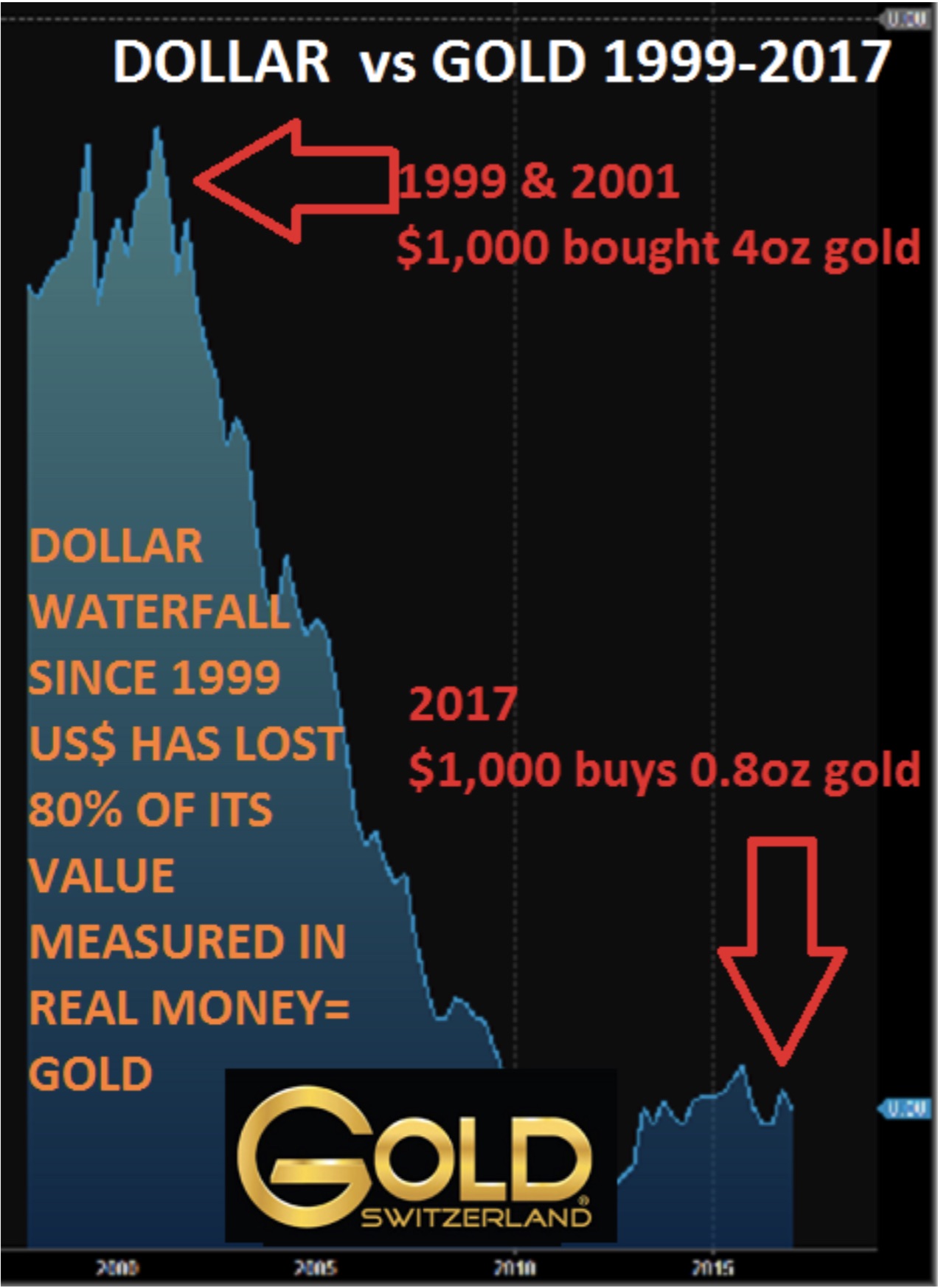 The average American is totally unaware of what is happening to his money since he doesn’t travel outside of the country. He doesn’t realize how prices are going up every year, especially since the official inflation figures have nothing to do with real inflation.

The only reason the dollar is still standing is that it is used as a trading currency, especially for oil. In the early 1970s, the US made an agreement with Saudi Arabia, which at the time was the biggest oil producer in the world by a big margin. Against US weapons and protection, Saudi Arabia would sell oil in US dollars, which meant that the whole world would trade in dollars. This was the start of the petrodollar. It is still in existence but it is only a matter of time before major parts of the world will start to trade in their own currencies. This is already happening between Russia, China and Iran for example.

But let’s look at the consequences of a currency backed by nothing except debt and printed money. Until 1970, the US was running a healthy annual trade surplus. Then, due to a weakening economy and escalating costs for the Vietnam war, the dollar started to fall. The French president de Gaulle had seen the US economic problems and therefore demanded that US debt would be paid in gold. The US gold backing of the dollar meant that any sovereign state could request payment in gold. But Nixon realized that the US gold would disappear quickly and he broke the Bretton Woods System which had been in place since 1944. Thus, the US would no longer settle its sovereign debts in gold but in depreciating dollars.

But Then Things Exploded…
Since this ominous day in August 1971, the United States has been in a state of continuous decline with escalating debts and a collapsing currency, with a standard of living that is no longer based on productivity but on credit. Let me just show the most obvious proof of this, proof that no one ever considers and which is the clearest evidence that the US is bankrupt. Since 1970, the US has had a trade deficit every year except for in 1972 and 1974. That led to a cumulative deficit of $2 trillion over 20 years, up to 1999. But then things exploded. Between 1999 and 2017 the cumulative trade deficit was $12 trillion.

Very few people realize what $12 trillion really means. So let us go back to gold. In an honest world with honest money, debts are settled with real money. And real money means that it is not just printed at a whim, instead that money represents the value of goods and services. Let’s say that the US people work for one month and produce $1.5 trillion worth of goods and services. If the government, at the same time, presses a button in a millisecond to produce the same amount of money, that money is of course worthless since the government has not delivered any goods or real services. And this is why the US and the rest of the world is living on borrowed time.

So let’s consider the consequences with a sound money system where debts are settled with real money. The trade deficit started to escalate in 1999, which was also the point when gold bottomed at $250. The $12 trillion trade deficit between 1999 and today is a lot easier to understand if it is measured in gold. Because until 1971, it would have had to be settled in gold. The average gold price since 1999 is $819 per ounce. $12 trillion at $819 per oz comes to 453,000 tonnes of gold. 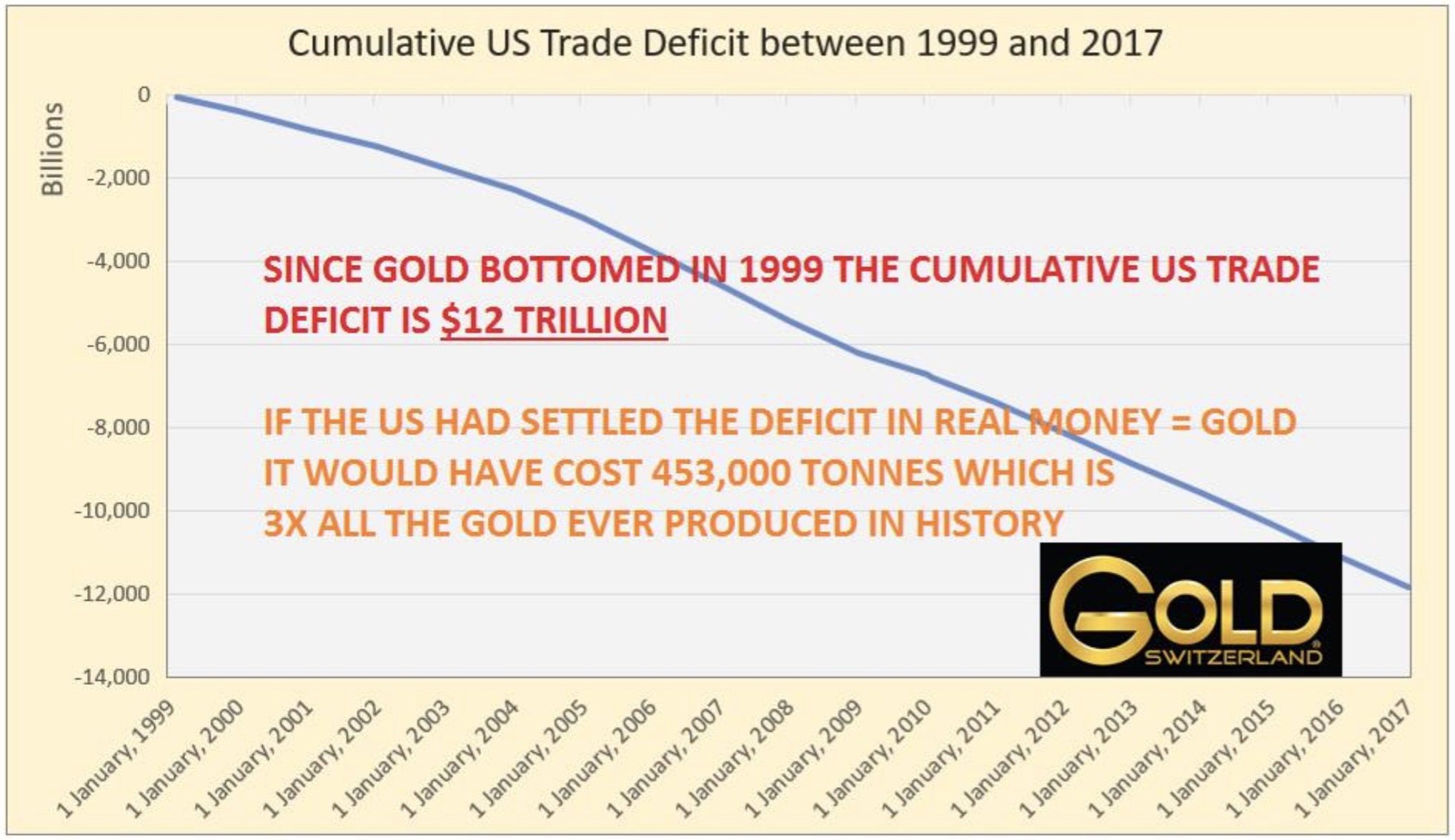 The US allegedly holds 8,000 tonnes of gold but the real amount is likely to be less than half of that. And all the gold ever produced in history is estimated at 170,000 tonnes. If the US had had to settle its frivolous spending and buying from the rest of the world with gold, it would need 2.7x all the gold ever produced. Instead, the US government found a much more convenient method. It printed worthless pieces of paper in the form of dollar notes or Treasuries and called this money. This is a flagrant Ponzi scheme and a fraud. The consequences will be that everyone holding dollars or US Treasuries will end up with nothing because that is the way that all Ponzi schemes end. This is an absolutely guaranteed outcome of the present so-called monetary system. Governments, central banks and bankers have, through their actions, destroyed the world economy in the last 100 years. The masses are totally unaware of this since they don’t understand that their car or iPhone is the product of a Ponzi scheme rather than real work.

New All-Time Highs For Gold & Silver In 2017?
So it is not a question of if but only when this will end. The most likely triggers will be the dollar and the bond markets, especially the long end. The US 10-Year Treasury yield bottomed in July last year and is now in a strong uptrend that eventually will reach at least the teens, like in the 1970s to early 80s. More likely the US government debt will become worthless and yields infinite. The dollar has been in a downtrend since the early 1970s. It has strengthened marginally in the last few years but it now seems that the upward dollar correction is finished and that we will see a strong downtrend during 2017.

Gold has partially reflected the currency money printing and debasement since 1971 by going up 35x. Silver is only up 10x since then. The principal reason for the relative small rises in gold, and especially silver, is the constant manipulation and suppression in the paper market. Without that manipulation, both gold and silver would be many times higher than the current prices. But the paper market can fail at any time, and once it does, there will be a price explosion in physical gold and silver while the paper metals will become worthless.

The next up-leg in the metals has most likely started already and we could see $1,350 in gold and well over $20 silver in a relatively short period of time. I would not be surprised to see all-time highs in 2017.

The Bottom Line
But investors who understand gold and silver don’t buy for the purpose of investment gains. No, at a time when the risks in the world financial system are greater than any time in history, precious metals are bought for wealth preservation or insurance purposes. There is no better way to protect your wealth against all the major financial and economic risks than physical gold and silver. $1,250 gold and sub-$18 silver are absolute bargains, unlikely to ever be seen again.”

To be one of the first people in the world to look at what the biggest money and sovereigns across the globe will use to maximize their investing returns CLICK HERE.