With all the talk of food deflation that is supposed to result from the Whole Foods/Amazon merger, in the real world food prices have soared 14% in just the past two months.

Real World Food Prices Soar 14% In 2 Months
June 19 (King World News) – Here is what Peter Boockvar noted as the world awaits the next round of monetary madness:  On Friday after the Amazon-Whole Foods news we heard a lot of opinions on what this should mean for the Federal Reserve in terms of technology and disruption bringing us another round of price deflation in the important category of food. I just want to remind people though that the secular downward pressure on consumer goods prices really started in 1962 when Walmart was founded and brought us Every Day Low Prices…

I do hope though that the Amazon deal and the entire price impact of the internet brings some deeper discussion broadly and within the halls of the Fed on consumer inflation and what drives it because I still counter that the 2% central bank inflation goal should be challenged as to why it makes any sense. On the goods side, technological breakthroughs and efficiency will always be a natural suppressant on prices. The Compaq Portable II, cost $3,499 in 1986. If it rose by 2% per year since it would today be about $6,300. Instead something similar is about $1,000. I’ll throw out hedonic adjustments that pollute the CPI/PCE readings for now. Honestly speaking, it is where government and the Fed have been most influential that has seen the most amount of inflation. Examples being housing, whether to buy or rent, tuition, and medical care. I won’t now get into asset price inflation. 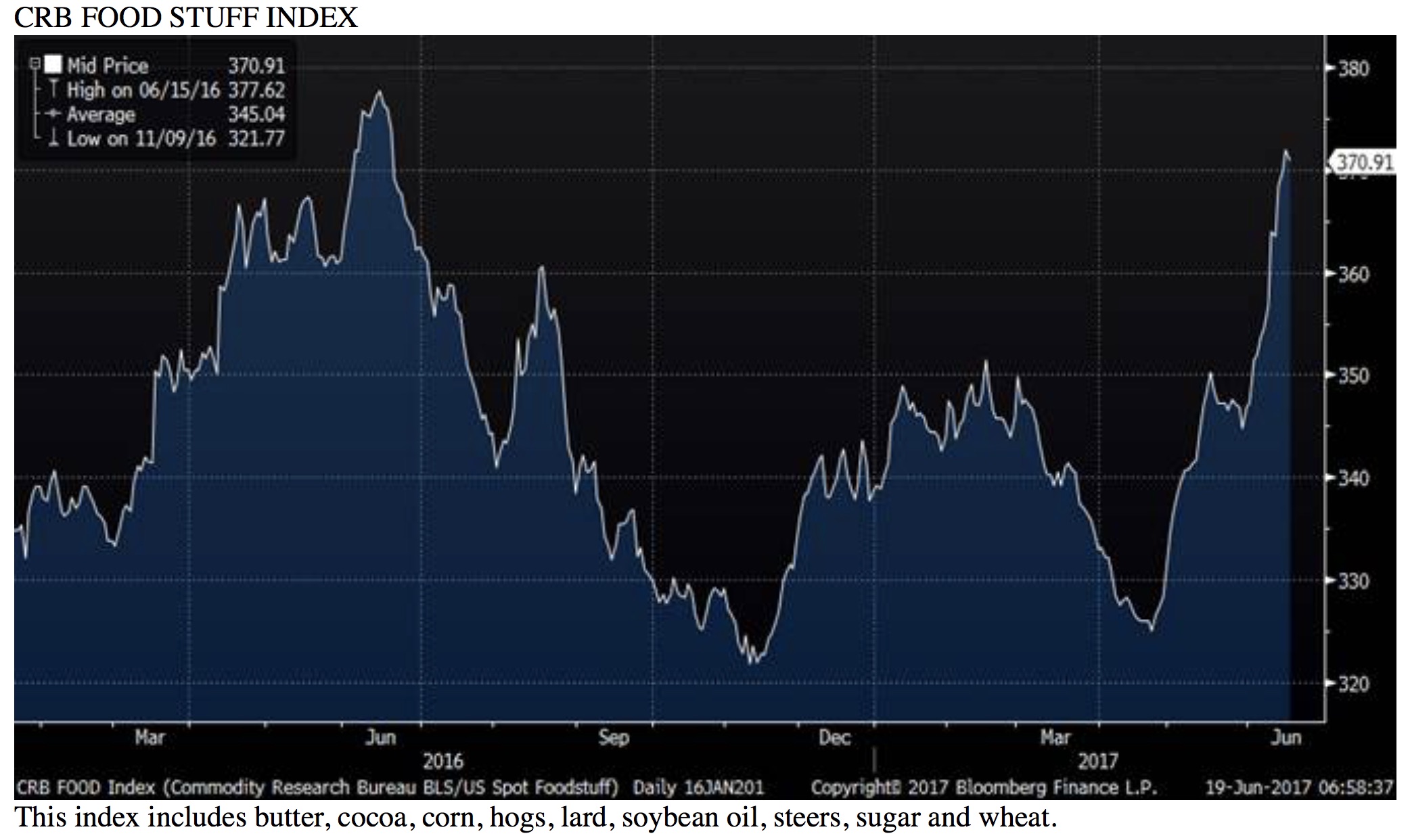 Bottom line, from a secular trend standpoint we will always have price pressures on goods with commodity prices of course being a cyclical variable and typically sticky services inflation mostly because of the influence of misguided government policy. Thus, the Fed needs to dig deeper into why and how they want to achieve this made up 2% figure. Lastly and back to food prices, as everyone is talking about food deflation, this is the chart (above) on the CRB food stuff index which is up by 14% in the past two months. I reiterate my positive stance on the washed out agricultural stocks, particularly the fertilizers.