On the heels of continued movement in the gold and silver markets, here are key portions of a special report that was just released by billionaire Eric Sprott’s company.

By Trey Reik, Senior Portfolio Manager at Sprott Asset Management USA
February 8 (King World News) – What accounts for the dispersion between gold’s 2016 market-leading performance and year-end bearish sentiment? As is frequently the case in the gold sector, short-term sentiment is generally more reflective of recent price action than underlying fundamentals. After consolidating sharp first-half gains during the third quarter (in constructive sideways fashion), gold and gold equities suffered meaningful corrections in Q4. We attribute gold’s fourth quarter weakness to a combination of three factors, each of which we view as temporary…

First, the Fed’s second rate hike in the current tightening “cycle” has unleashed a new round of forecasts for multiple rate increases in each of the next several years. Of course, this will be the eighth straight year of consensus confidence in Fed tightening, a record so far unblemished by success. Second, the Trump victory has unleashed powerful expression of latent longing for normalcy in business and economic conditions. While we are sympathetic to the frustrations of consumers and business leaders from the distortions of eight years of QE and ZIRP, we suspect recent sentiment highs will soon be tested by harsh realities of excessive debt levels and legacy malinvestment. And third, gold’s inability to sustain sharp  first-half gains has reignited debate as to whether 2016 strength was merely a bear-market rally. In our view, fourth quarter weakness amounted to fairly textbook retesting of gold’s January 2016 breakout from a three-year downtrend.

Gold’s Correction To Be Short-Lived
If our analysis is correct, the investment opportunities afforded by gold’s fourth quarter correction are compelling, and, in our view, likely to prove short-lived. We recognize that bullion’s inherent volatility makes an investment in gold notoriously difficult to “time.” When gold is appreciating rapidly, it is natural for investors to feel an entry point may have been missed. Conversely, because gold corrections can be sharp and swift, investors can find buying dips a bit daunting. Finally, during occasional instances when gold trades flat for an extended period, investment urgency can be lost. In our experience, the most logical juncture for a significant commitment to gold is immediately following a bull-market correction. As long as underlying fundamentals remain intact, such corrections can help harness gold’s volatility within favorable risk/reward parameters, especially over the short run.

We find it puzzling that, in an environment of compressed returns in traditional asset classes, institutional investors continue to eschew gold’s market-leading returns. As shown in Figure 1, gold has generated annual returns, denominated in the world’s prominent  at currencies, which are more consistently positive than any major global asset of which we are aware. After twelve consecutive years of advance and a 515.38% gain through 2012, gold corrected 36.65% through 2015. Gold appears to have resumed its upward bias during 2016, rising 29.59% to an intraday high of $1,375.45 on 7/6/16, before closing the year with an 8.56% gain. Gold’s compound annual return during the past 16 years now stands at 9.44%, roughly 75% higher than the 5.37% compounded total-return of the S&P 500 Index. There have been decades such as the 1980’s and 1990’s during which relevant market fundamentals did not logically support a portfolio allocation to gold. And then there have been periods such as the past 16 years during which gold has provided unparalleled protection of portfolio purchasing power parity. 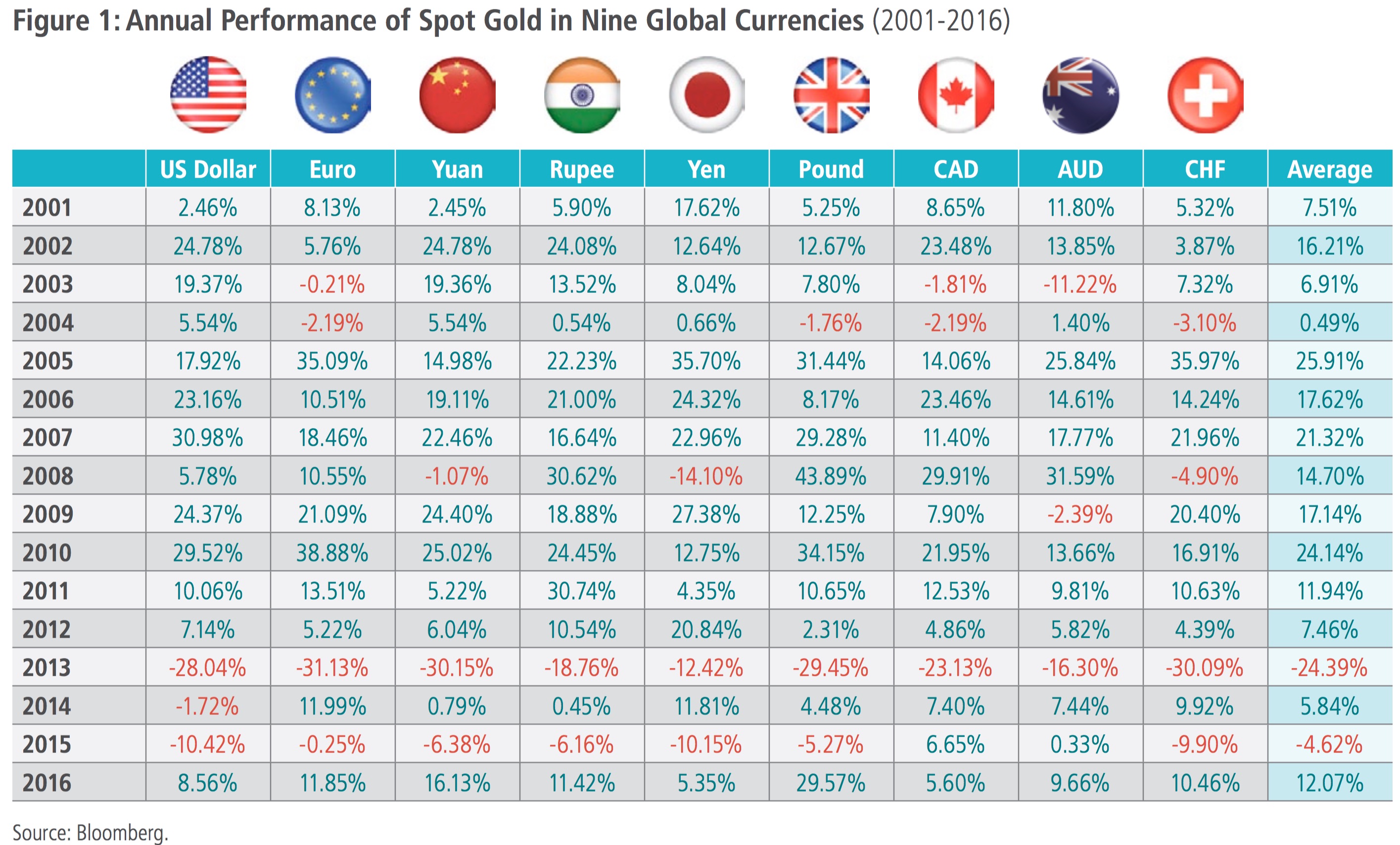 The motivating fundamental which powers our gold investment thesis is the decoupling of financial assets (claims on future output) from underlying output itself (GDP). In essence, the United States economy suffers a debilitating structural debt problem. We present in Figure 2, the single most representative chart in understanding rationale for a portfolio allocation to gold: the ratio of total U.S. credit market debt (Fed’s Z.1 Report) to GDP. Despite popular perceptions of deleveraging in recent years, the ratio today rests at what we regard as an absurd level of 352%, roughly double the high-end of historical experience outside the Great Depression and the Greenspan/Bernanke/Yellen era. In our view, to balance the U.S. financial system and return to healthy economic growth, some $20 trillion of outstanding U.S. credit will need to be rationalized through default or debasement. We believe economic events of the past fifteen years strongly support our contention that an $18.7 trillion dollar economy cannot support total outstanding credit of $65.7 trillion without annual non-financial credit growth on the order of $2-$3 trillion. At least since 2009, whenever the U.S. economy has been unable to generate non-financial credit growth on this order of magnitude, the Fed has felt compelled to “bridge the gap” with equivalent rates of liquidity-creation through the auspices of QE asset purchases. 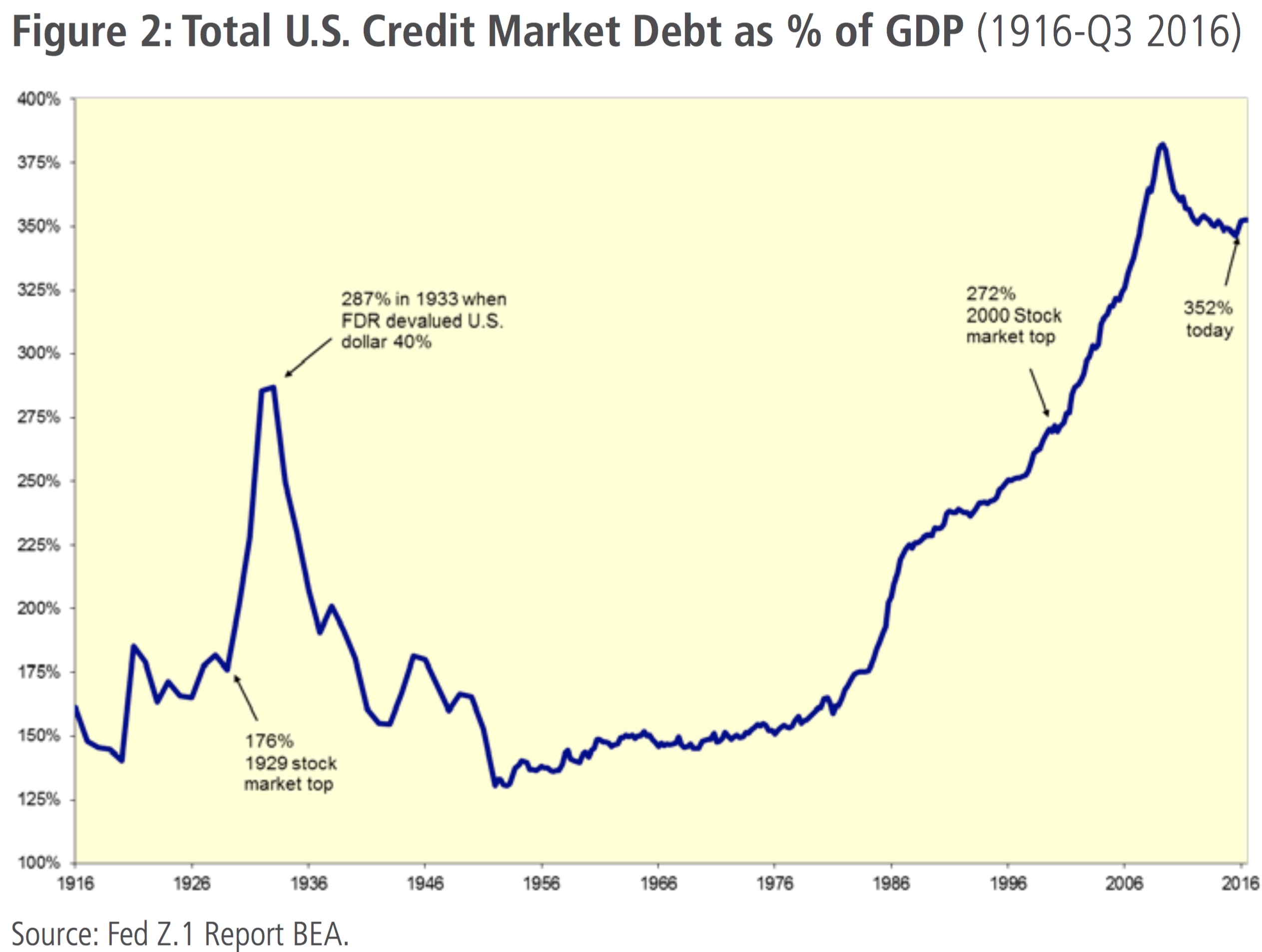 As shown in Figure 8, 10-year Treasury yields have marked ever-lower cyclical highs for the past 35 years. There is certainly more than one way to interpret cause and correlation between the declining rate peaks in this graph and the ten highlighted crises coincident with these peaks. Our synopsis would be that aggregate debt levels have become so burdensome that even modest upticks in rates catalyze default episodes, in one economic sector or another, which in turn require even lower rates to ameliorate. Importantly, each outbreak of credit stress exposes prior malinvestment. In our view, the financial system has hit the point at which interest rates simply cannot rise until nonproductive debt is cleansed from the financial system. 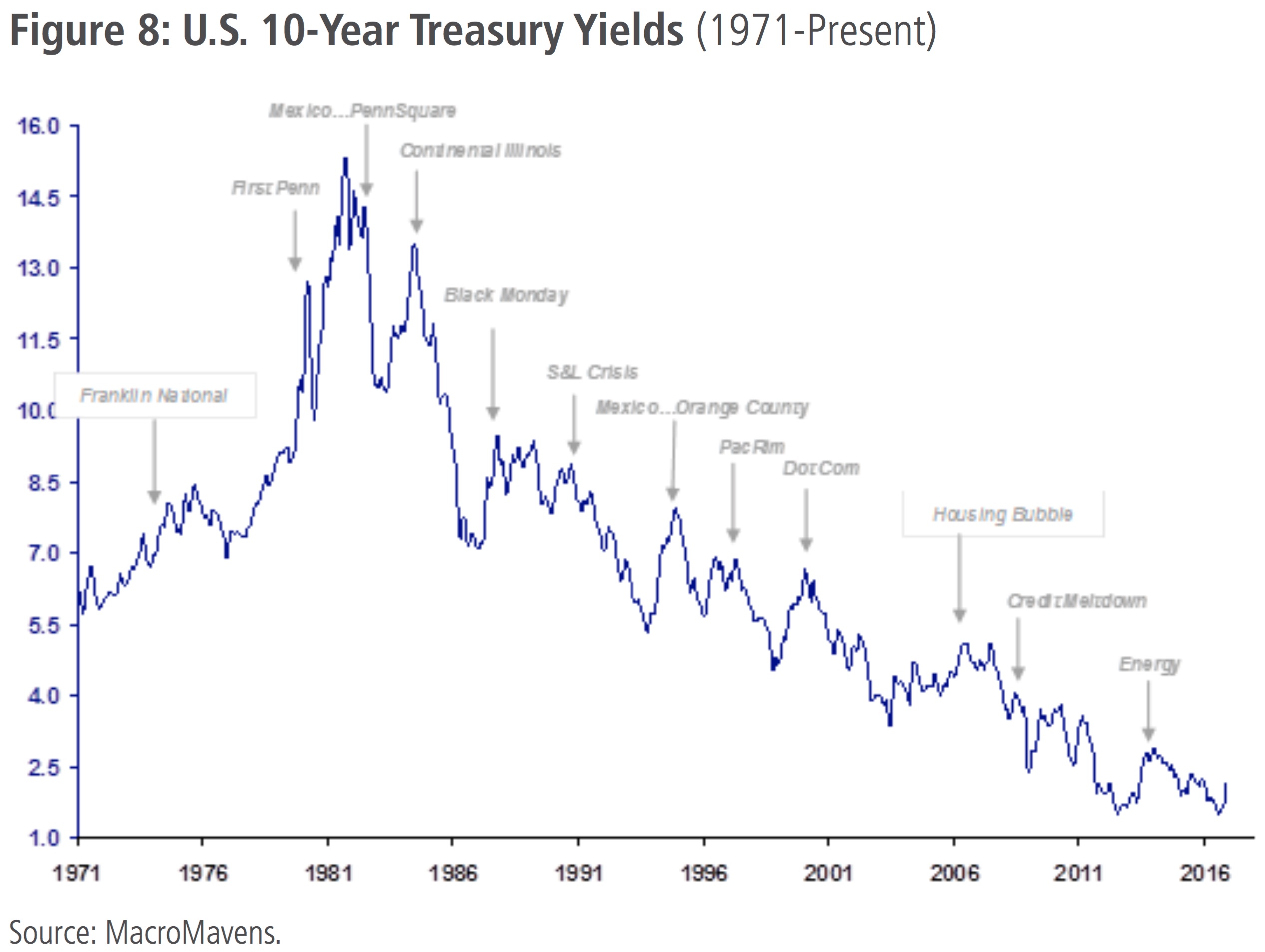 A significant distinction between our view and consensus is the considerable skepticism with which we view the creditworthiness of outstanding credit in the United States. During the past eight years, Fed stewards have artificially depressed the entire U.S. rate curve – on the short end through ZIRP and on the long end through $3.6 trillion in QE asset purchases. The stated intention of QE programs was to lower long-term interest rates by inflating prices of the world’s two most important financial assets (Treasuries and MBS). Because almost all financial assets are priced in some manner to these bulwarks, the Fed successfully suppressed rate structures around the world and ignited the greatest global search for yield in financial history.

Economic behavior, decision making, tradeoffs and commitments have all been distorted by artificially suppressed interest rates. Especially given the extended duration of Fed-imposed ZIRP, the global financial system has morphed into something totally different from that which existed during “normal” rate structures. To assume the world can now readjust to normalized rates without years of painful rebalancing is a remarkably naïve perspective. We expect significant amounts of U.S. credit to be exposed as uneconomic. Using our preferred lens of historical U.S. debt-to-GDP relationships, at least $20 trillion of U.S. total-credit-market debt should succumb to the inevitable rationalization process.

We view corrections in gold markets during the fourth quarter of 2016 as fairly standard retests of early 2016 breakouts from established downtrends. To us, underlying fundamentals suggest significantly higher gold prices during the next several years.

While we view the investment merits of gold equities as substantially different from those of gold bullion, we expect the shares of high-quality gold miners to provide significant portfolio leverage to any advance in the gold complex in future periods. Given inherent volatility, we are loath ever to cite specific targets or forecasts for future performance in the gold sector. On the other hand, we have for the past 15 years dedicated our  rm’s resources to exhaustive analysis of underlying fundamentals and future prospects for gold and gold shares. We feel we have developed strong and informed perspective on valuations in the precious metal space. 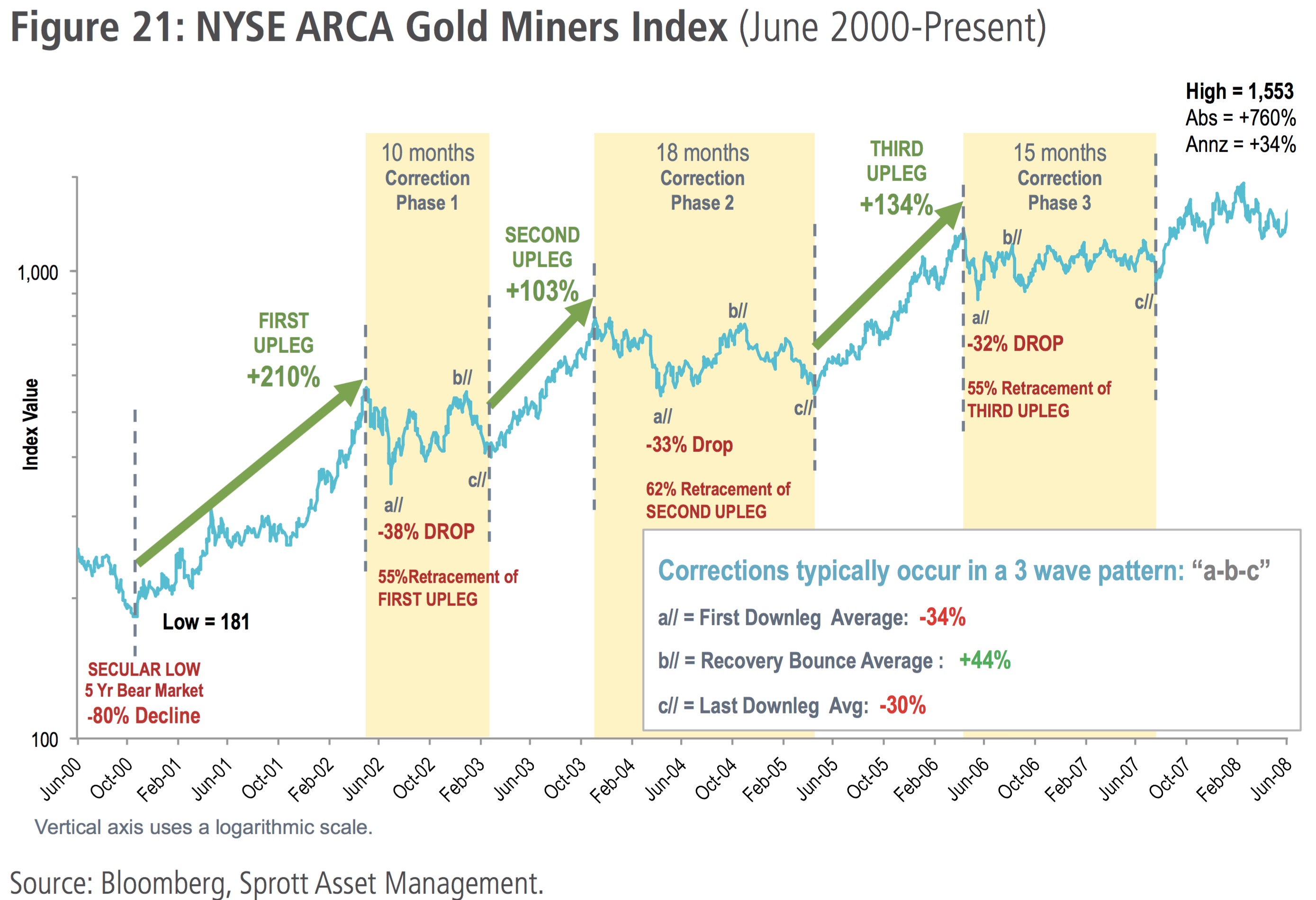 Along these lines, our study of past performance cycles suggests that the Q4 2016 pullback in gold equities is largely consistent with historical patterns. After a sharp initial leg of advance during the 2000-2008 cycle, for example, gold equities suffered an initial correction on the order of 38%, which demoralized gold investors and emboldened non-participants. Interestingly, the recent pullback in the NYSE Arca Gold Miners Index from its 8/10/16 high close of 870.28 to its 12/16/16 low close of 529.09 measured 39.20%. While past performance is never a predictor of future results, we document in Figure 21, the strong performance of gold equities subsequent to their second-half 2002 correction. With underlying fundamentals even more supportive in 2017, it is anyone’s guess what the future holds.