WORSE THAN 2008: The Financial World Is Facing The First Chapter Of A Global “Uh-Oh Moment”

Today one of the greats in the business warned the financial world is facing the first chapter of a global “uh-oh” moment.

Telling You What Powell Won’t Confess: He’s Seeking not Fighting Inflation
July 17 (King World News) – Matthew Piepenburg, Partner at Matterhorn Asset Management:  As repeated in numerous articles and interviews, global central banks in general, and the Fed in particular, have placed themselves and the global markets and economy in a trap from which there is no escape short of biting off their own feet, as they’ve had a foot in their mouths for years.

Or as Mohamed El-Erian said best: “The Fed has no good scenarios left.”

Candor (and Debt) Matters
With global debt at $300T+, and combined U.S. corporate, household and public debt well past $90T, the Fed’s “face-saving” attempt to raise rates (even to the unsustainable level of say 4%-5%) as a weapon against 9% reported (i.e., under-rated) CPI inflation is a failed strategy from the start.

In fact, it is delusional at best, and more likely dishonest at worst. Full stop…

Facts Portend the Future
Toward this end, we’ve dedicated years to fact checking, BS-detecting and calmly disclosing a long string of open rigging, lies and errors masquerading as policy which have poured from the lips and policies of figures like Greenspan, Bernanke, Yellen and Powell.

Despite the stubborn honesty of such facts and dishonesty of our bankers, many FOMO investors have clung to the cognitive dissonance of believing central banks had their backs—and their markets and currencies in eternally safe hands.

Now, as the transitory inflation lie has broken the credibility of these lost shepherds and the faith of their sheep, the financial world is facing the first chapters of a global “uh-oh moment” (i.e., geopolitical risk, falling markets, debased currencies, failing leadership, and increasing social unrest), the inevitability of which we’ve warned in two published books and countless reports.

Most reading this, of course, are not among the sheep nor the surprised. Yet even for you and us, the continued hubris, ignorance and dishonest desperation of our so-called central bank “leadership” never fails to astonish.

Apparently, Powell is afraid of going down in history as the next Arthur Burns.

Not surprisingly, he appears more pathologically concerned about his personal legacy than the fatal legacy he and his predecessors have left the inflation sick nation after inflating the Fed balance sheet from $800B pre-08 to over $9T today. 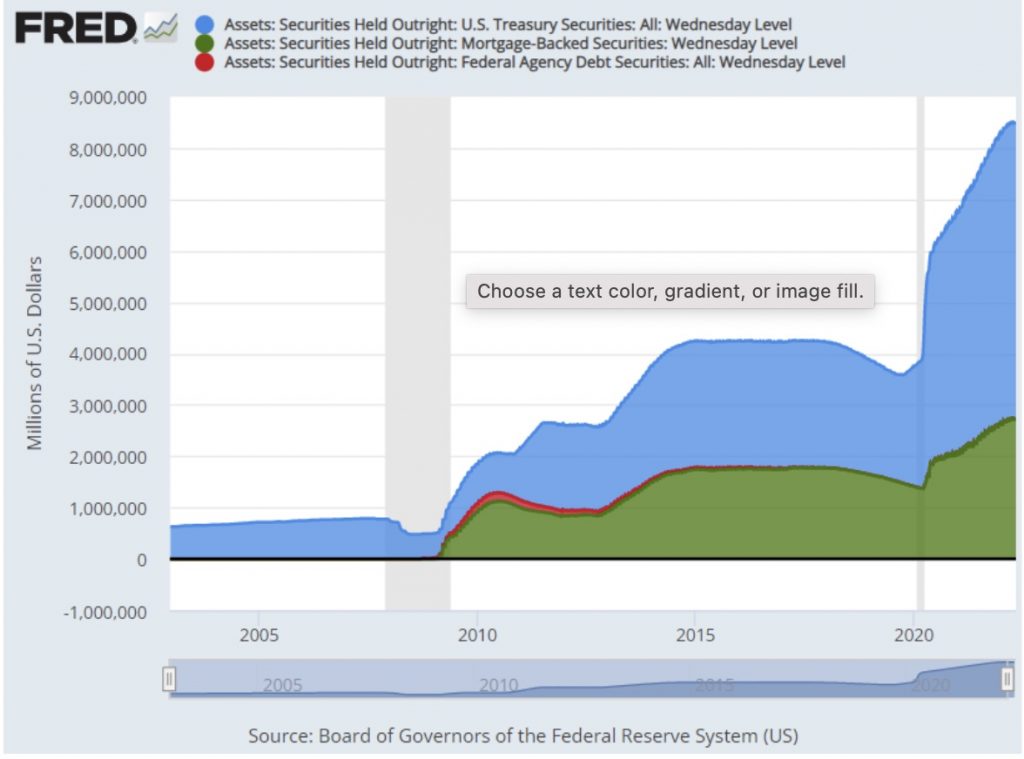 Despite the obvious and direct inflationary consequences of such balance-sheet expansion, everyone in a DC office (from Biden to Powell) wants to save their reputational behinds and blame the consequences of decades of their openly inflationary monetary policies on a virus and a bad guy in Russia.

How’s that for profiles in courage?

And even now, Powell still thinks he can emerge as the next Paul Volcker by raising rates to fight the inflation he helped create.

Man, the ironies do abound.

Folks, Powell is no Volcker.

A Lesson for Mr. Powell: Debt Matters
Mr. Powell, if you are reading this, let us remind you that when Paul Volcker was raising rates, the US public debt was below $900B, not the current $30 TRILLION debt level which the Greenspan generation (i.e., that includes YOU) directly created.

TODAY, our debt-to-GDP ratio is over 120% and our deficit ratio is approaching 7%.

Math, facts and debt are stubborn things, no?

By the way Mr. Powell, even a meek 3% FFR as you so “hawkishly” propose would leave our FFR rate lower than it has been for 98% of the last 67 years.

In short, if you are honestly pretending to fight inflation with a wussy little rate hike like this (because 300 bps is about all the gasoline debt-soaked USA can afford thanks to you, Yellen, Bernanke and Greenspan making us debt broke), you are effectively bringing a knife to a gun fight (i.e., you’re gonna lose).

Furthermore, your proposed rate hikes (far too little, far too late) will raise the cost of Uncle Sam’s bar tab level from 7% to over 11% of our ever-dwindling GDP.

In short, Mr. Powell, your dreams of Volcker glory, or ever Volcker efficacy, are only that: dreams.

Dreams to Nightmare
For the rest of us, however, the nightmare you’ve unleashed and the “solution” you’re proposing is rigged/doomed to fail.

Your FFR rate hike will create debt pains that will last for years, as the government’s average debt maturity is greater than 4 years.

Even these meager yet higher rates will (and already have) disrupted financial markets, strangled GDP growth, augmented welfare spending and shrunk U.S. tax receipts by 16% YoY in May and likely by 30% in June.

Mr. Powell, while crunching numbers in school, did you ever bother to read Hume or von Mises?

They would have shown you (with numbers not hard words) that GDP growth is mathematically  impossible once debt levels are greater than 100%.

Or just ask Kuroda, as you can no longer ask Abe.

Although you will never be the next Volcker, you may want to purchase a biography of Benjamin Strong, the first Fed Chair to trigger a depression by not allowing inflation to run hot as mandated by the rules then in place (i.e., when the USD was tied to gold) …

Powell’s Real Plan? Let Inflation Rip
But then again, Strong’s mistake of not allowing inflation to run hot enough to “inflate away” U.S. debt may not be your mistake, but deep down your real plan?

In short, I’m guessing that more rather than less inflation is your only real option and plan, despite headlines (and rate hikes) to the contrary.

I’m guessing you’re only raising rates now so that you’ll have something, anything at all, to cut when markets truly tank, and we both know they will tank much further, unless…unless…

…unless you are waiting for markets to break so that you can grab a coffee and doughnuts, walk into that dark room at the Eccles Building with all those glowing screens and start adding magical 0’s to your balance sheet (i.e., mouse-clicking more fake money), which we both know is INFLATIONARY.

Sure, your ol’ Pal Yellen (who slithered from the private Federal Reserve to the Treasury Secretary’s desk) has tried to push the USD (and DXY to 110+) to fight Putin’s inflation (?), but that too was just another knife in a gun fight…

Yellen believed she’d pull a Reagan-era 2.0 with a stronger USD and hence attract foreign money to make a stronger market.

But as revealed above, our debt levels (thanks to folks like you and Janet) aren’t the same as the 1980’s and her strong USD “plan” was a disaster for the markets, as the following graph from Tree Rings makes all too clear: 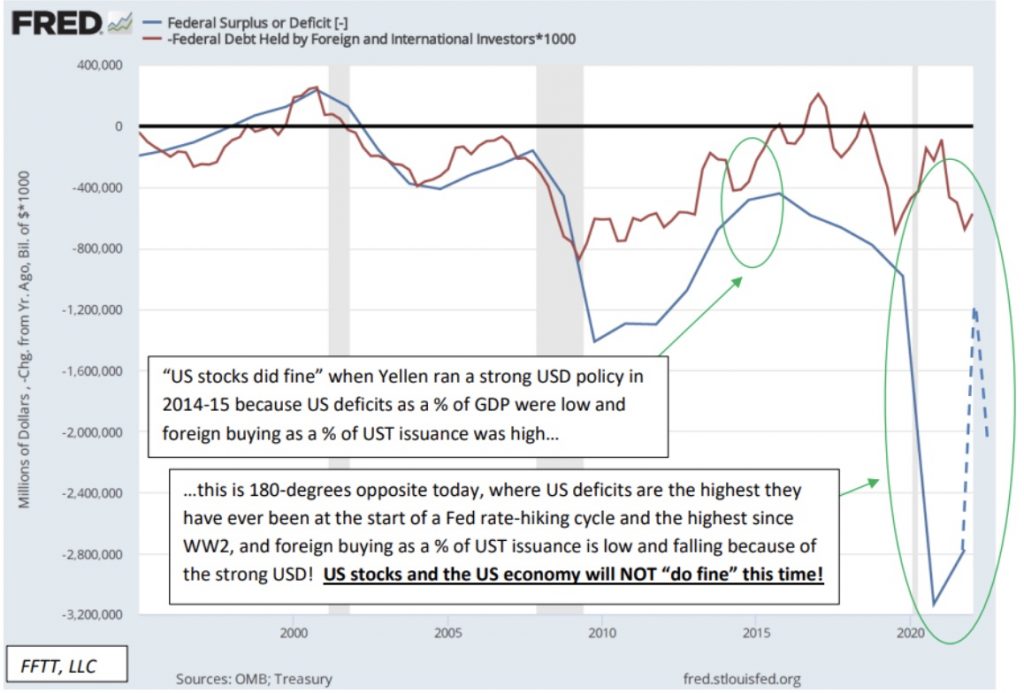 This “strong USD” plan has crippled just about every asset class but the USD, and only managed to lure a few foreign suckers into a tanking US market.

So, Mr. Powell, you’re in a debt corner of your own (and Janet’s, Ben’s and Alan’s) making, and I’ll say what you won’t, namely: You want more not less inflation to get Uncle Sam out of debt in the same way every broke regime from Rome to Paris to Tokyo to DC has done and will do again — by inflating away their debt, crushing the (angry) man on the street and blaming the CPI on anyone but yourselves?

So why not just say it out loud?…This will link you directly to more fantastic articles from Egon von Greyerz and Matthew Piepenburg CLICK HERE.