With global markets on the move, look at these surprises. Plus another bullish gold and silver catalyst.

November 10 (King World News) – Peter Boockvar:  With tech such a dominant foundation of the S&P 500 as we know with many the ‘work from home’ play, we can’t rule out the possibility that this index, along with the NASDAQ, bottomed on March 23rd at the depths of the shutdown and topped on November 9th on the great news of a very effective vaccine. Again, valuations also now matter for this group. As for the rest of the market like value/commodity stocks, banks, leisure and hospitality, and overseas, Asian stock markets, to name some other groups and regions, they now have rays of light and I continue to expect them to outperform from here.

The October NFIB small business optimism index was unchanged m/o/m at 104 but the internals were more mixed.

Plans to Hire fell 5 pts and Positions Not Able to Fill gave back last month’s 3 pt rise. Current Compensation trends were flat but at a high level and Compensation Plans rose 2 pts to the highest since February. Capital spending plans fell 1 pt while those that said it’s a Good Time to Expand was unchanged. Those that Expect a Better Economy fell 5 pts but paradoxically those that Expect Higher Sales rose 3 pts. Earnings trends improved by 9 pts and now has risen sharply from the -35 print back in June. To my growing inflation theme, those that expect Higher Selling Prices rose for the 5th month, by 2 pts to match the highest level since July 2019.

Lastly, and most likely reflecting pre election unknowns and of course Covid, the Uncertainty Index rose 7 pts to the most since November 2016, the previous presidential election month. That, and with the Pfizer news should certainly reduce that ‘uncertainty’ in the next survey.

Bill Dunkelberg, the chief economist at the NFIB, said “Leading up to the presidential election, small business continued to focus on stabilizing their businesses but were uncertain about the future economic conditions due to Covid government regulations on all levels. We see solid momentum going into the 4th quarter, and another good quarter could get the GDP back to its 2019 closing levels.”

With the very positive Pfizer news we definitely see an end to what Covid has wrought but we also have to understand that there is still a tough winter ahead until there is mass inoculation and selective restrictions will be in place in many sectors. My initial reaction though is that any soft economic data points we see in the coming months will get a pass because we know it will be ‘pre vaccine.’ It is also why I think rates will continue to move higher and I hope Fed members in their upcoming speeches will be asked in their Q&A’s about how they view policy in 2021 with a vaccine. They cannot with a straight face say rates will stay at zero for 3 years and that QE will continue at $120b per month (it was $80b during QE Infinity) for years to come since the ONLY reason why they are at zero and they are doing such aggressive QE is because of this virus…

Fed members Kaplan, Rosengren, Brainard, and Bostic all speak today. Hopefully they’ll get asked because the Pfizer news changes everything. Will the Fed take policy to where the puck is going or will they pull a Yellen and not raise rates until 6 years after the previous recession ended. If they repeat the latter, the long end of the Treasury market will be doing it for them.

The Fed’s Senior Loan Officer survey was released yesterday and here is some of what it said for businesses. “Regarding loans to businesses, respondents to the October survey indicated that, on balance, they tightened their standards and terms on C&I loans to firms of all sizes. Banks reported weaker demand for C&I loans from firms of all sizes.” For commercial real estate in all major categories (construction and land development, nonfarm nonresidential loans, and multifamily loans) “banks tightened standards and reported weaker demand.” For households, “banks tightened standards across all categories of residential real estate loans and across all three consumer loan categories – credit card loans, auto loans, and other consumer loans – over the third quarter of 2020 on net.” Notwithstanding the stronger standards, “Banks reported stronger demand for credit card loans, auto loans and most categories of residential real estate loans.”

Bottom line, banks got stingier with businesses and companies saw softer demand for loans and while consumers want more credit, banks are taking a closer look in extending them. This is not what accelerating economic growth is made of. Hopefully though that changes in Q2 2021.

Bullish For Gold And Silver Long Term
We saw inflation data out of China with CPI up .5% y/o/y, the same as the core rate but below the estimate of up .8%. Food price inflation which has been rampant for the past two years is finally slowing down led by pork prices (post swine flu) but also in part to tough comparisons. As seen in the below CRB food index, food prices are rising led by corn, soybeans and wheat. 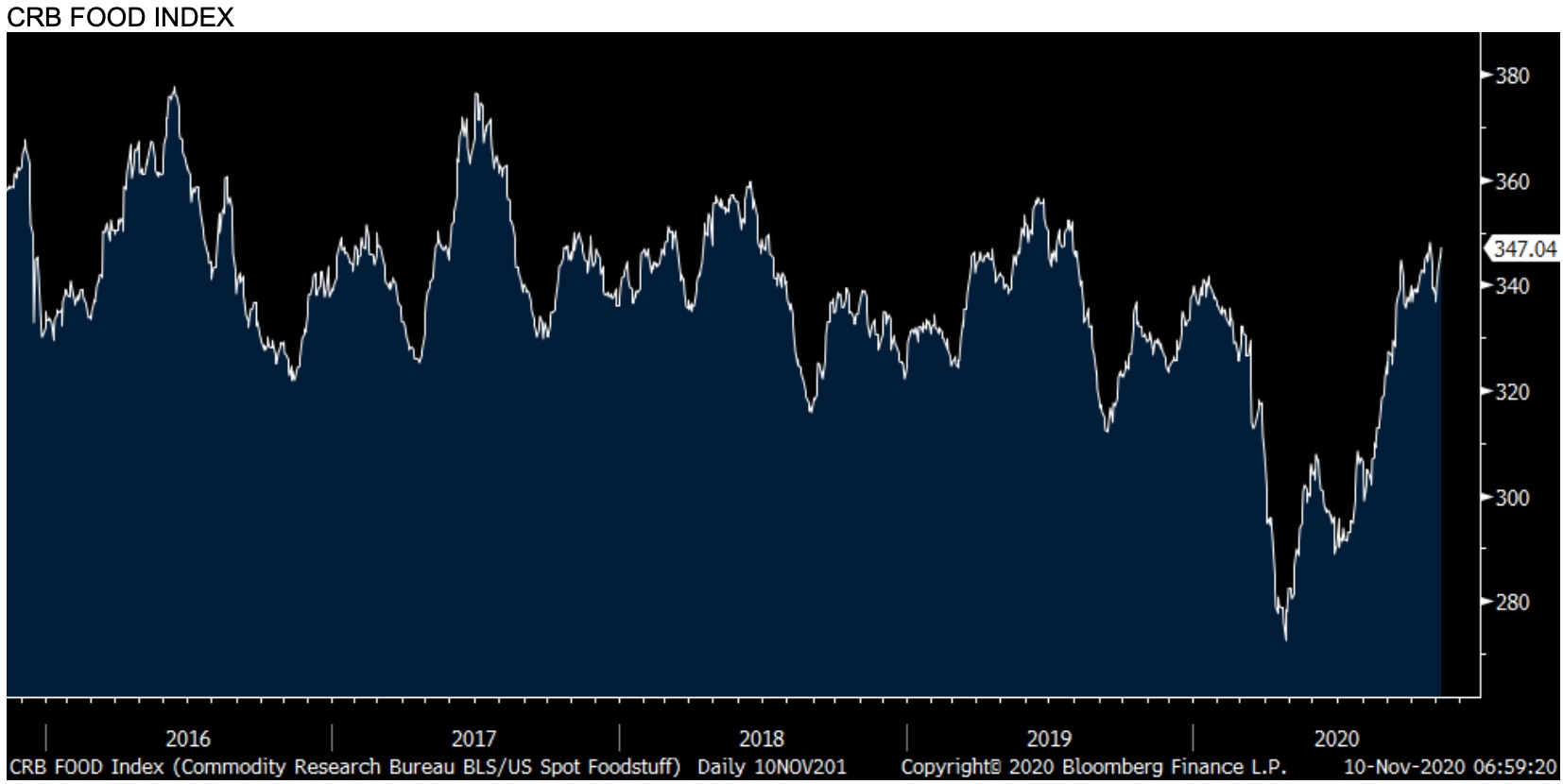 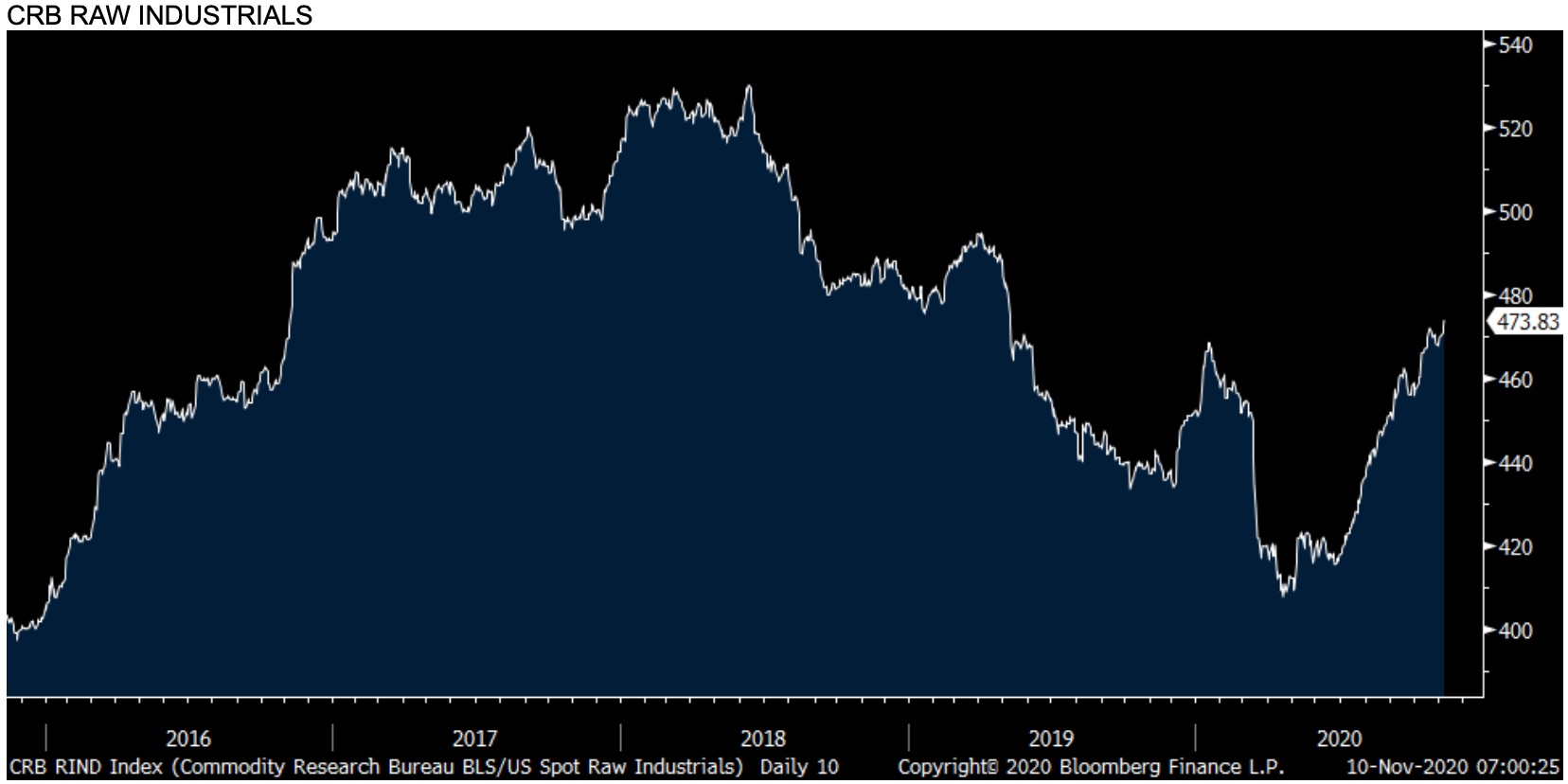 These numbers are not market moving and China stock markets, both the A and H shares, were the only major market in the red overnight.

Shifting to Europe, the German November ZEW index fell sharply to 39 from 56.1 and that was below the estimate of 44.3. Current Conditions were down by 5 pts to -64.3, a touch below the forecast. ZEW said “Financial experts are concerned about the economic impact of the 2nd wave of Covid and what this will entail. The ZEW indicator of Economic Sentiment has therefore once again significantly decreased in November, indicating a slowdown of economic recovery in Germany. There is also the additional worry that the German economy could head back into recession.” Fortunately for Germany, the most recently announced shutdowns have been much more mild when compared with March and April but does point to the still tough winter ahead of what should be a much brighter spring.

Ahead of a new round of shutdowns in the UK announced in October, the September jobs data already showed weakness. For the 3 months ended September, employment fell by 164k jobs, more than the estimate of 150k and the unemployment rate rose 3 tenths to 4.8%. This is still being suppressed by the job/wage subsidization program in place. More up to date, the October jobless claims figure positively saw a decline of 29.8k while September was revised sharply lower by almost 70k to -40.2k. I’m sure November will see a rise again. The pound quietly is rising to the highest level in two months as it does seem progress is being made on Brexit. I expect a much higher pound when the deal is sealed.