December 1 (King World News) – Last week King World News told its global readers that the US dollar breaking decisively below 92 would cause the price of gold to explode higher (see below).

(Last week on KWN)
This Will Reverse Gold Price Higher
King World News note:  The US Dollar Index is in danger of a major breakdown if the 92 level is decisively taken out on the downside. If that happens, the gold market will explode higher in an instant.

If US Dollar Index Decisively Breaks 92,
Gold Will Explode Higher 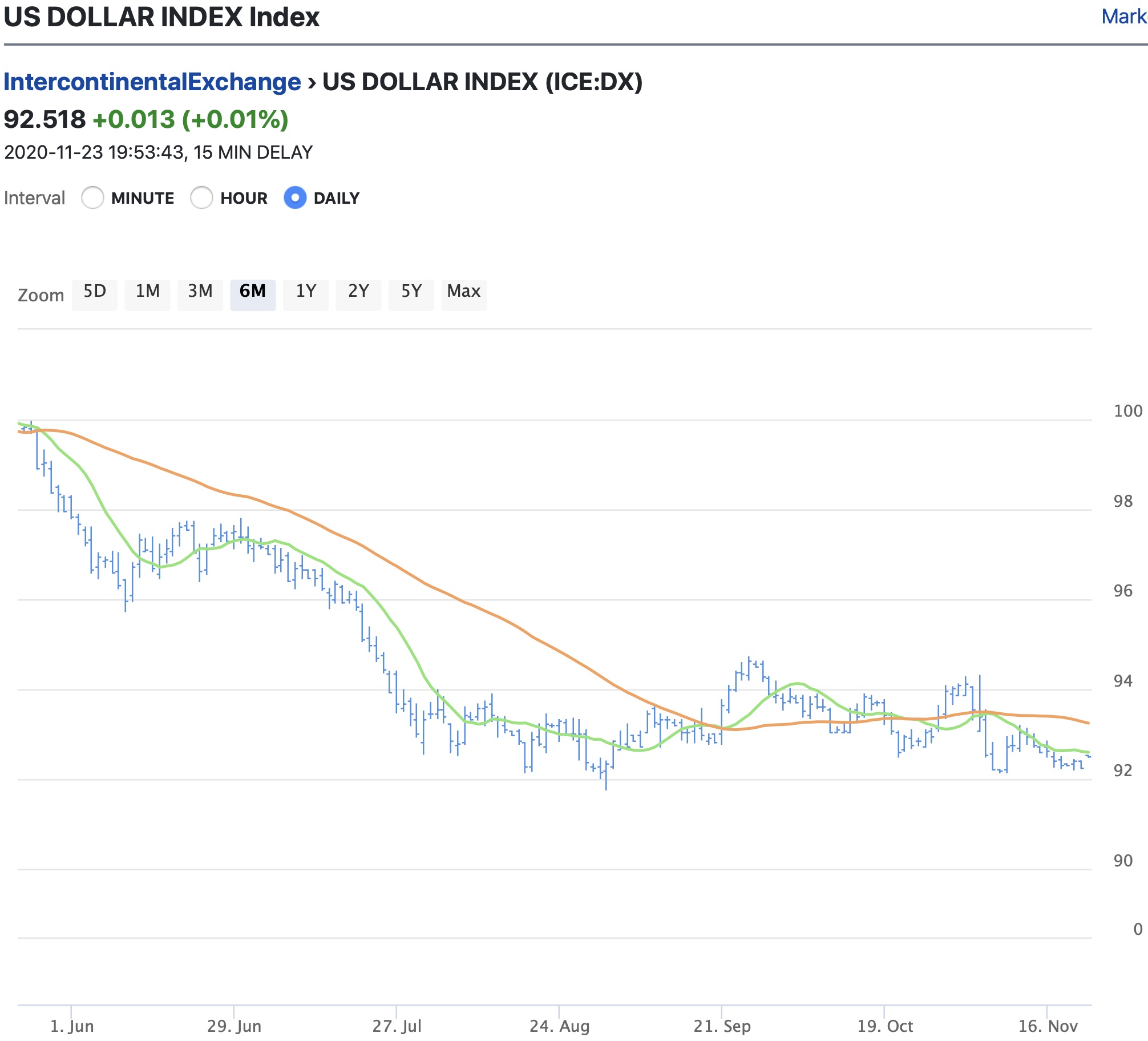 That’s exactly what we have seen today as the price of gold has surged nearly $40 and silver is up close to $1.50 on the dollar’s decisive plunge. For additional information on the gold and silver rally read what James Turk has to say below:

Big Day For Gold & Silver
James Turk:  More often than not, Eric, the central planners do a pretty good job of containing precious metal prices during month-end option expiry. And the expiration of the December options was worse than most months.

Fortunately that episode is now behind us. And the February options don’t expire until the end of January, so we should have several weeks of clear sailing with minimal effort by the central banks to control precious metal prices. Their power is limited, particularly when recognising that gold and silver are undervalued at current prices.

So it’s time for gold and silver to catch up with all the other markets soaring as a result of the two things central banks are doing.

First, there is all the money printing by central banks around the globe. Second, the world economy is still contending with central bank financial repression resulting in negative interest rates…

Neither of these two actions by central banks is helping the global economy. Instead they are fueling speculation in the stock market. They are also making governments look solvent by keeping their interest expense burden lower than it would be if rates weren’t suppressed to artificially low levels.

For example, the US federal government paid $0.5 trillion in total interest last year. That was less than the year before and about the same it paid in 2018. Yet during this 3-year period its debt soared from $20 trillion to $27 trillion.

We are reaching the moment in time, Eric, when something has to give. Given the growing inflationary pressures, interest rates have to go up or the dollar’s exchange rate has to fall. Even though interest rates have nudged up a little despite the Federal Reserve’s attempt to stop rising rates by buying $600 billion of paper over the last few months, it is clear that the dollar is falling off the edge of the table. The market is speaking, and the market is always bigger than any central bank or group of central banks acting together in a cabal.

Hi-Ho Silver
So regardless what the central planners throw at the precious metals, they can’t hold back the consequences of the tidal wave of currency printing they created. It means that the backdrop for the precious metals is very bullish, and I remain particularly bullish on silver because the gold/silver ratio is still too high.

We can see the battle lines on this chart of March silver. 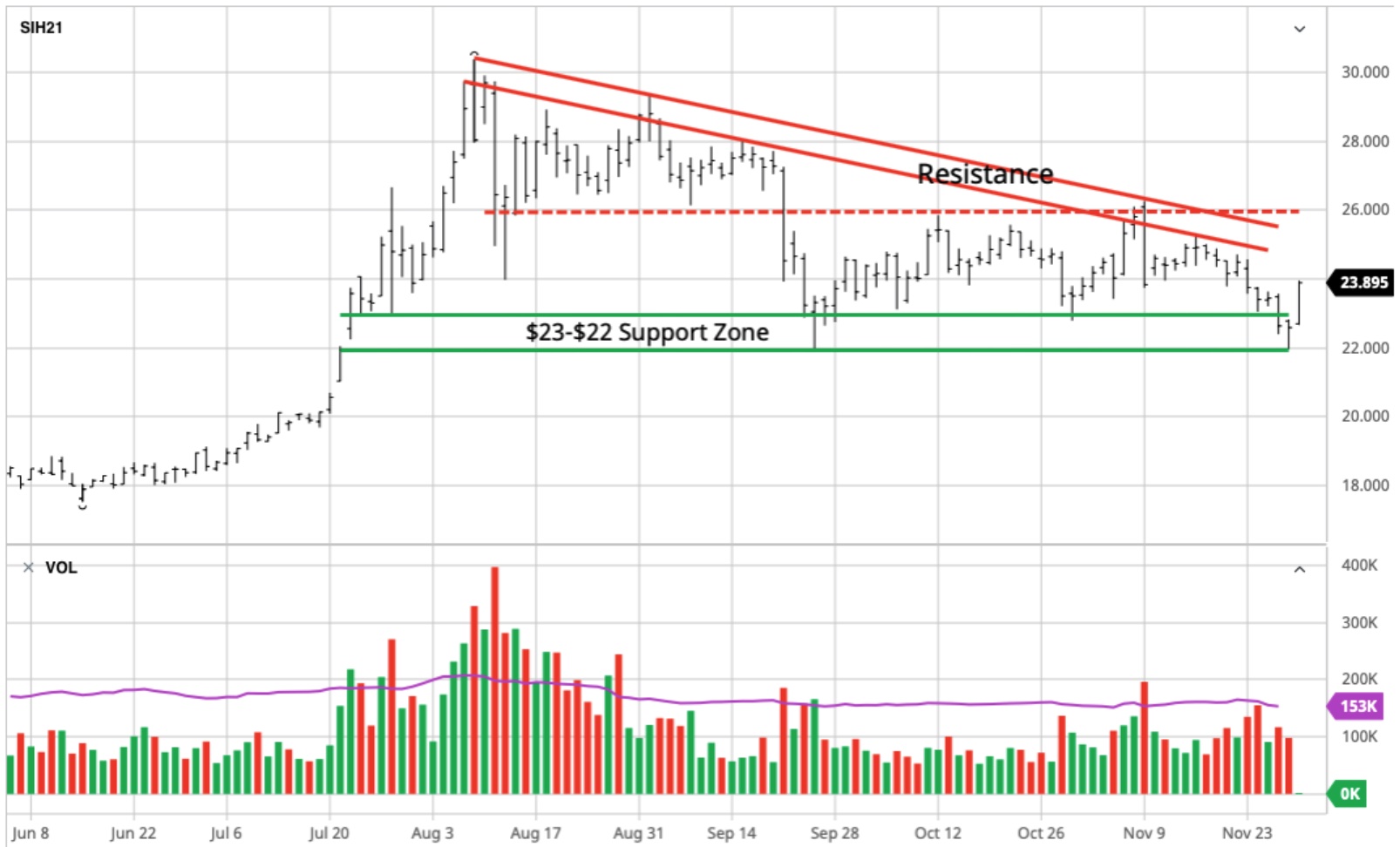 Silver continues to consolidate the big gains it made earlier this year. So the pattern outlined on the chart is growing. Silver is just building more support and that’s like putting more fuel into a rocket. Silver needs to clear $26, but it will take off with an upside break-out from this pattern.