With the price of gold falling below $1,270 as the US dollar and crude oil continue to strengthen, Whitney George looks at the big picture for the gold sector.

Big Picture For The Gold Space
April 23 (King World News) – Whitney George, President, Sprott Inc.; Chief Investment Officer, Sprott Asset Management:  We believe a new gold mining mergers and acquisitions (M&A) cycle has been ignited, and we expect this merger boom to accelerate over the next several years. The tepid gold price environment since 2011 has forced many gold producers to decrease their focus on exploration and this has caused a significant drop in new discoveries, at a time when global gold reserves are being depleted (see Figure 1). 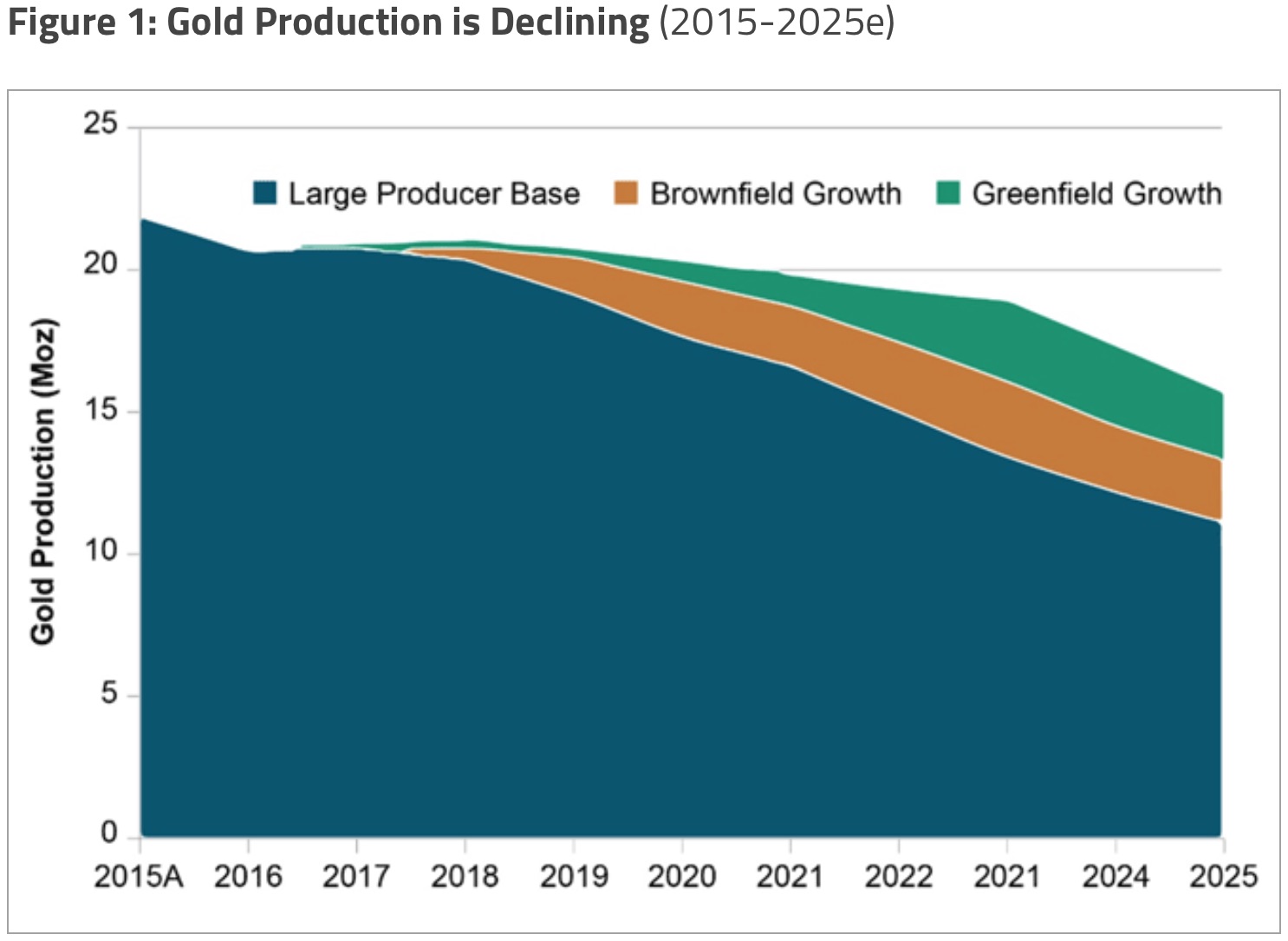 We are experiencing the logical industry-consolidation activity that we saw in the late 1990s to the early 2000s, which followed a prolonged period of disinterest in gold. In those early days of the last wave, there were no premium mergers at the start—buyers were not willing to acquire a company above its market price. This is where we are today.

Gold has experienced a tough period for the past seven years since prices peaked in late 2011 at about $1,900. This period of weaker prices has increased pressure from shareholders on companies to cut costs and slash debt. Investors are not very interested in gold right now. Capital is tough to come by. The gold mining sector is still highly fragmented, and investors are no longer willing to invest in single mine companies because of the high risk. There is an impetus for smaller mining properties and companies to merge into larger organizations…

We’ve already seen aggressive consolidation among the majors (large-cap companies) like the Barrick-Randgold deal, which closed on January 1, 2019. Newmont followed with a bid for Goldcorp, as it vied with Barrick to regain its top position. Most recently, Barrick and Newmont agreed to an innovative joint venture in Nevada, which will represent the world’s largest gold producing operation. Australia’s Newcrest Mining has bought a majority interest in Canada’s Imperial Metals and is working on a joint venture deal with Greatland Gold.

These are the early innings of what we believe will be a new, prolonged M&A cycle. We see tremendous potential especially in the junior mining space, given that smaller gold mining companies are trading at a material discount to larger mining companies.

Most equity markets are forward looking and are early predictors of events that unfold. There is no reason why gold mining equities will not foreshadow a recovery in gold prices. History demonstrates that gold mining equities have the ability to outperform during significant corrections in U.S. equities. As shown in Figure 8, since 1996, there have been only two periods of extended inverse performance between the NYSE Arca Gold Miners Index (GDM)2 and the S&P 500: 1996-through-2002 and 2012-through-the-present. 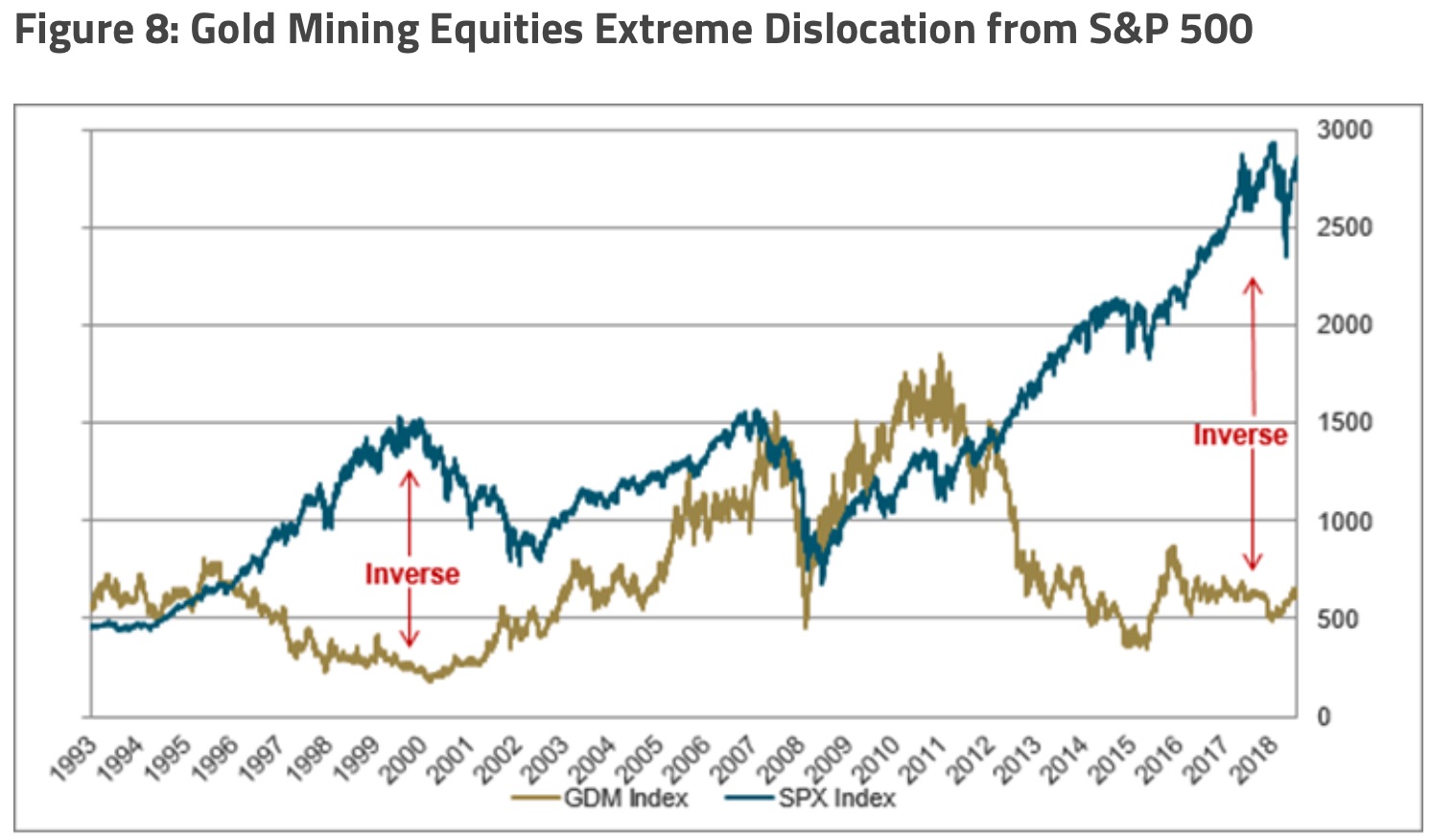 In the first instance, gold shares slumped as the internet bubble hit full frenzy through March 2000. Then, as the S&P 500 fell 52%, gold stocks tripled. Since 2012, gold shares have suffered from the sharp decline in the gold price and the self-inflicted damage caused by ill-timed acquisitions.

The gold mining industry has learned some tough lessons and has been fighting to rebuild its credibility and financial health ever since. The M&A boom currently underway is another sign that the larger mining companies are not waiting for a higher gold price to lift them higher — they are focusing on what they can control — mergers, acquisitions, divestitures and joint ventures have the potential to unlock tremendous opportunities and value for shareholders.

***Also just released: The World Will Be A Radically Different Place, And There Will Be A Lot Of Pain CLICK HERE TO READ.