The following commentary is from Jason Goepfert at SentimenTrader: “Gold miners have held up well lately. Despite new lows in gold, many gold miners remain well above their own lows. The one with the longest history, Newmont Mining, has had 6 days in the past three weeks when it was at least 5% above its low when gold itself was hitting new lows. That’s one of the most concentrated periods of positive divergences in its history (see chart below). 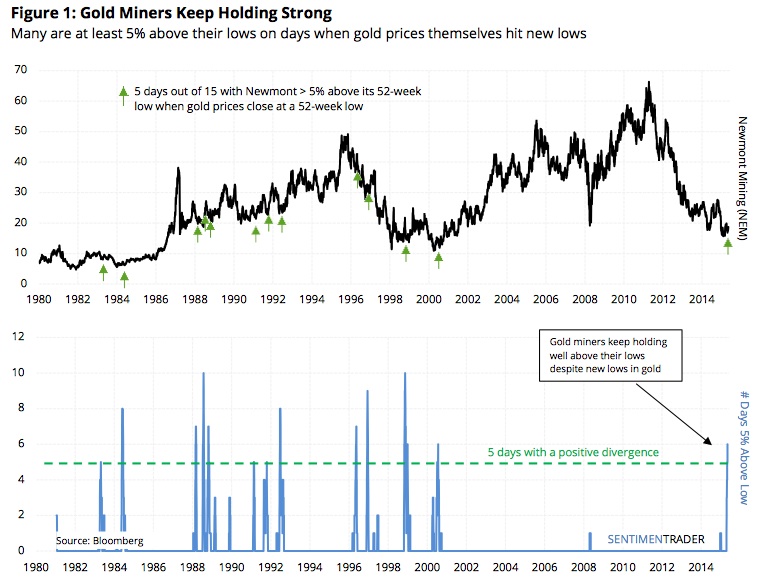 In the Headlines (on Wednesday) we noted that despite another new low in the price of gold, indexes of gold mining companies were holding at least 5% above their own lows.

There is always a chicken-and-egg issue with divergences like this, with the question about whether the commodity is a leading indicator for the related companies, or vice-versa.

As noted yesterday, all 32 days when this has occurred since the inception of the gold mining indexes with the most history led to gains over the next three months.

Twenty years of history is good, but it’s usually best to have more. The only way to do that is to use individual stocks, and the one with the most history is Newmont Mining.

It’s not ideal to rely on a single stock, but most of these companies move together, and it allows us to get another 15 years of history.

Figure 1 (chart above) shows how many days over a three-week period that gold closed at a one-year low, but Newmont closed at least 5% above its own one-year low.

Over the past three weeks, gold has hit a low 6 times when Newmont was at least 5% above its low. That’s one of the largest clusters of positive divergences it has seen.” ***This latest commentary is just a portion of one of the latest fantastic reports. To try a free 14-day trial of the internationally acclaimed work that Jason Goepfert produces at SentimenTrader simply CLICK HERE.

***KWN has now released billionaire Eric Sprott’s extraordinary KWN audio interview, where he discusses the chaotic global trading and what surprises to expect next as well as in 2016, and you can listen to it by CLICKING HERE OR ON THE IMAGE BELOW.