On the heels of gold rallying, here is an important update on silver, energy and commodities.

Silver, Energy & Commodities
May 24 (King World News) – This is from Andrew Adams at Raymond James: Energy Hits Resistance – The energy sector has been on a tear recently, but the steady run up has left many stocks in the sector quite extended on a near-term basis. Moreover, the Energy Select Sector Index is hitting up against resistance from a line drawn from the 2016 and early 2018 highs and this could give the group some problems. We continue to like the theme, though, and pullbacks should be bought. A drop to the 750 zone in the sector index would be an interesting entry or reentry point.

Energy Move Only Beginning? – While the energy sector is likely overbought in the near term, it only broke out last month from its downtrend when compared to the S&P 500 as a whole. That downtrend had largely been in place since the middle of 2014, so it could still be early innings for a period of energy outperformance.

But Early Days For The Move In Energy 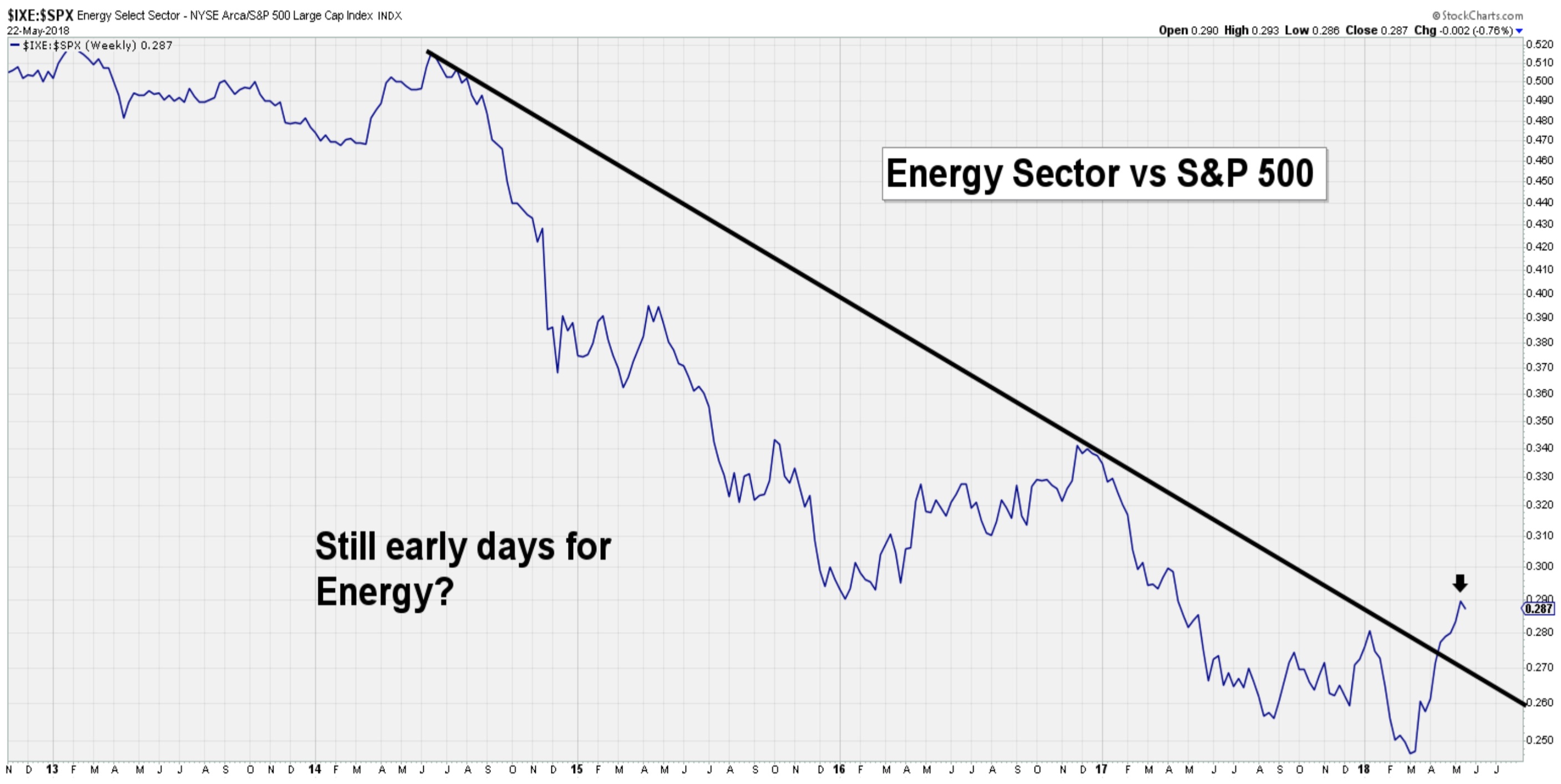 Commodities Continue To Break Resistance – We continue to think commodities have entered their own bull market and the Reuters/Jefferies CRB Index has now broken out above a couple of important resistance lines. Here, too, the asset class may be a little overbought in the near term, but we think commodities have the potential to go much higher over the longer term if we’re correct about them.

Silver Over Gold? – Despite commodity indices doing well and despite all the talk about inflation picking up, we have not really seen positive moves yet in gold or silver. Both metals mostly remain range-bound, but it does look like we may be getting a shift in the trend between the performance of the two. Gold has mostly outperformed silver since 2011, but silver has started to demonstrate better relative strength and actually looks to have broken the uptrend that has been in favor of gold.

Trend Flips Back In Favor Of Silver

Regarding Silver & Gold, This Article Was Just Released In Northern Miner!

Maple Gold Mines (TSXV: MGM; US-OTC: MGMLF) has just completed the winter 2018 drill program at its Douay project in the Abitibi greenstone belt of northwestern Quebec. The company drilled a total of 22,606 metres — 21,122 metres of diamond drilling in 52 holes and 1,484 metres of RC drilling in 57 short top-of-bedrock holes. The program started in mid-January and ramped up with more drill rigs as it received additional permits.

In April it closed a $3.95 million private placement that was completed at the current market price with no warrants. The financing was almost exclusively Quebec funds and insiders. At the closing, Quebec fund ownership in the company on an undiluted basis increased from 3% to about 10%. Many of the investors were instrumental in the funding and development of the Canadian Malartic mine, now owned by Agnico Eagle Mines (TSX: AEM; NYSE: AEM) and Yamana Gold (TSX: YRI).

Most of the gold found at Douay so far is associated with a syenite gold system that forms part of a 7 km long trend of mineralized zones. These zones are found within the central part of the project’s strike length, which stretches 55 km along the Casa Berardi Deformation Zone. Douay’s intrusive-related mineralization style is also present at several other deposits that have been discovered in recent years, including Canadian Malartic, Osisko Mining’s (TSX: OSK) Windfall project, and Alamos Gold’s (NYSE: AGI) Young-Davidson mine.

The Northern Miner: Will you be doing any more drilling before the end of the year?

Fred Speidel: That’s it for the winter program. I wouldn’t say that that’s it for the year. Chances are we will want to add some more metres before the year is out, and we do have the necessary permits in place. For now, core sawing is still ongoing with the majority of assays still pending from the current program, so we have significant results expected between now and July, and we have plenty of new data to process and to evaluate before we design the next drill campaign.

TNM: In April you announced that you had defined a new gold zone.

FS: Yes. We’ve already achieved initial success from the newly defined Nika zones, which form part of the northwest gap area, between the Douay West, Northwest and Porphyry zones. We were targeting that area because there is less drilling there, and there’s a lot of potential to add ounces to the resource base in this area.

We are very happy with the fact that the Nika zones include a completely new mineralized area, and also that existing zones have been extended to the NW as a result of 2018 drilling. Our initial press release for this area highlighted results for the bottom of drill-hole DO-18-218, and we were keeping our fingers crossed waiting for the assays from the top 400 metres of that same drill hole, as the core looked very promising. We ended up getting 50 metres of 1.77 grams per tonne gold from 297 metres downhole so that was very encouraging. Not only did it confirm the continuity of the existing high-grade zone, but it also let us link up previously discontinuous zones applying our updated structural model.

TNM: Are you optimistic there are more zones to be found at Douay?

FS: We’re still finding new gold zones and many of these are proving to have more continuity than previously thought. At the Nika Zones, all mineralization is outside of the existing pit-constrained resource, and so will be adding to the resource base for the resource update planned for late 2018. We have also found new mineralized areas in the NW and Porphyry Zones.

We’ve also had some success on the south side of the Porphyry Zone — we had an intercept of 158 metres grading 1.25 grams per tonne gold — and that is one of the best intercepts of all time at the Douay property, so we’re clearly excited about that. This is not a new zone. It’s part of an existing one, but it is higher grade than anticipated, so we’re seeing grade variations laterally. There are also indications of the possibility that grade increases at depth here. This particular high-grade zone is open up-dip and down-dip, and we’ve got additional drilling in this area for which assays are pending.

TNM: Can you see any patterns?

FS: There is a structural pattern that is starting to emerge, with intersections between the East-West faults of the Casa Berardi fault set and the NW-SE faults of the Douay fault set showing particular potential for increased thickness of mineralization. These intersections appear to explain at least part of the pinch and swell morphology of several of the mineralized zones.

We view these results very positively and believe the additional assays between now and July will continue to confirm these as well as other additional zones of interest. We look forward to updating the geological, structural and resource block models between now and the end of the year.

TNM: What other work do you have planned this year?

FS: We’ll also be doing some mapping and sampling programs this summer in the central part of the property as well as limited geophysics. All of this work, combined with ongoing compilation of historic information we have in new areas of interest, will help us define targets for the next drill campaign.

Roughly 30% of our total diamond and RC drilling focused on new discovery targets in greenfields areas along the extensions of structures (Casa Berardi and Douay fault sets) known to control mineralization, as well as between these structures, where we are continuing to define new exploration targets.

The property itself straddles a 55 km section of the Casa Berardi Deformation zone where it is at its widest. The early returns from the initial results from the resource area drilling have been very promising. We are equally excited about the potential for new discoveries that could define brand new zones several kilometres away along the same Casa Berardi break. Assays are still pending for the greenfields drill-holes.

King World News note:  What is important right now is the ramp up in inflationary pressures that are still to come.  This is why interest rates are surging, along with oil and other commodities, which have ended a brutal bear market and begun a new bull market.  All of this will be extremely bullish for gold and silver prices medium- to long-term as well as the shares of the high-quality companies that mine the metals.