Two Different Paths Being Taken By Central Banks, Infrastructure Bill, And When It Comes To Inflation “Let’s Pray”

There are two different paths being taken by central banks, plus a look at the Infrastructure Bill, and when it comes to inflation “let’s pray.”

Two Paths Being Taken By Central Banks
June 25 (King World News) – Peter Boockvar:  I mentioned yesterday the two paths being taken by central banks with emerging market central banks (and some developed ones) trying to normalize and skating to where the puck is going and the largest developed central banks that haven’t even showed up to the arena. The Bank of Mexico yesterday surprised markets with a 25 bps rate increase to 4.25% and interestingly said this:

“Although the shocks that have affected inflation are expected to be of a transitory nature, given their variety, magnitude, and the extended time frame in which they have been affecting inflation, they may pose a risk to the price formation process.”

I don’t believe the BoM even bothered with QE so no need to taper anything. The Mexican peso rallied yesterday by 1.7% and is up again today for the 5th straight day vs the US dollar and at a 2 week high. The Mexican 10 yr yield jumped by 11 bps yesterday and is closing the week higher by 25 bps at 7.05%. Yes, 7.05%. Emerging markets are the only place you can get risk adjusted yield but FX risk is still there. I’m long EM, local currency bonds.

Mexico follows the central banks in Brazil, the Czech Republic, Hungary, and Russia in the last few weeks along with the groundwork laid in Norway and South Korea for rate hikes. “Yes, there are two paths you can go by, but in the long run there’s still time to change the road you’re on” once sang Robert Plant.

Infrastructure Bill A Yawn
The stock market got excited by the infrastructure bill likely passage while the bond market yawned. I believe it was a yawn because it is $570b of new money spread out over 5 yrs and thus is peanuts and it’s just predominantly going to filling in potholes, and repair and maintenance to airports and bridge. And good luck finding workers and getting planning and permitting done in a quick period of time. As we saw in 2009, there is no such thing as shovel ready. I do want to emphasize though that we need these improvements along with broadband in rural areas and power grid additions and those businesses in providing picks and shovels will benefit but there are no Hoover Dams or Tennessee Valley Authorities being built here. 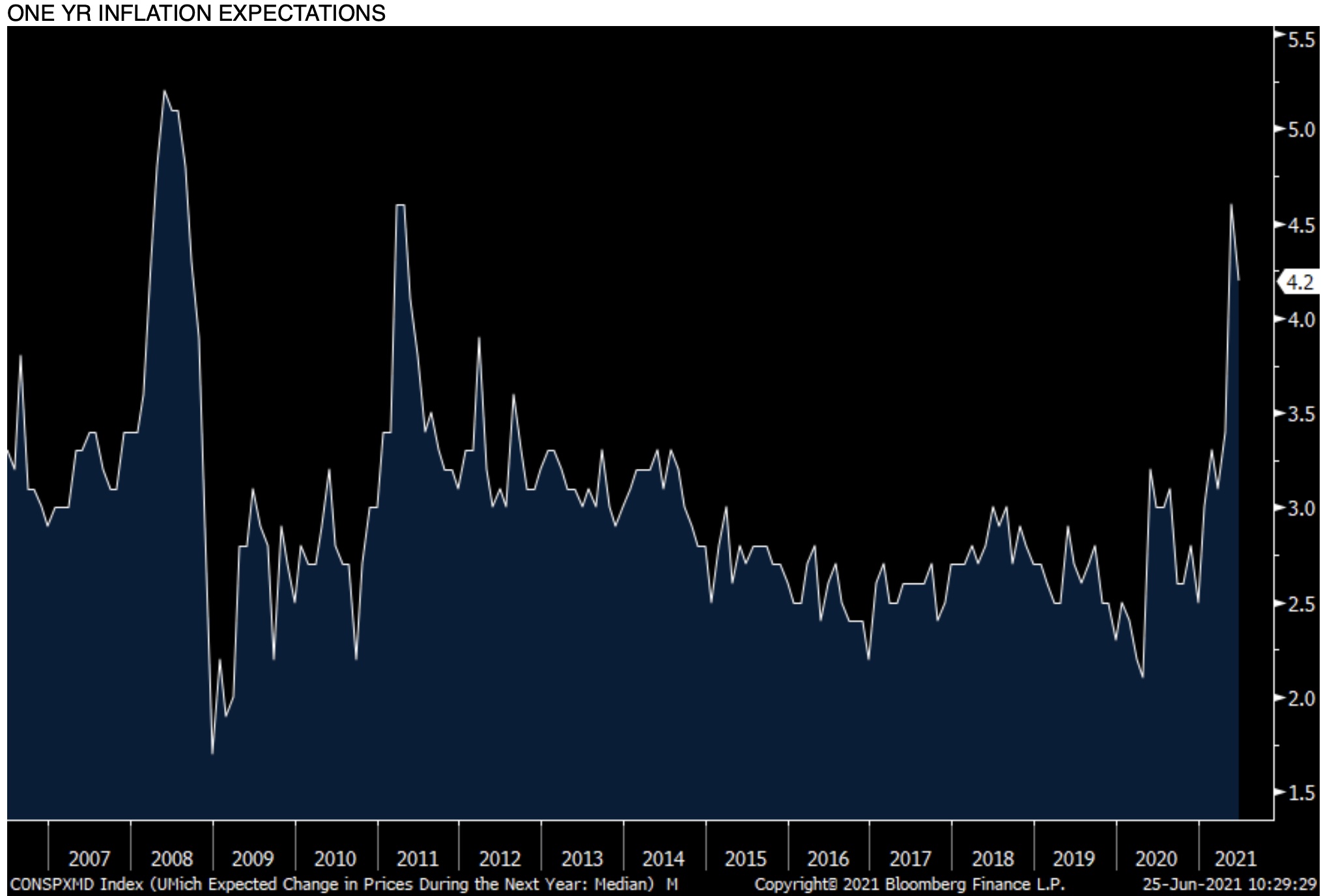 “Let’s Pray”
Gas prices are a key factor in this and while gas prices are at the highest level since 2014 according to AAA, less people think that will continue. I unfortunately believe they will be wrong as I expect even higher energy prices in the quarters to come. Not only is the Wall Street consensus and within the Fed that the current pace of inflation gains is transitory, consumers feel the same as longer term expectations came in at 2.8% vs 3% in May and the UoM said “consumers also believed that the price surges will mostly be temporary.” As the WSJ said, “let’s pray.”