On the heels of gold price breaking below $1,275, one of the greats in the business says that pressure is now building for the price of gold to break above $1,300.

Just below the surface, trading in Western precious metals markets has assumed a technical tone.

After advancing 16.08% from an 8/16/18 intra-day low ($1,160.27) to a 2/20/19 intra-day high ($1,346.82), spot gold has spent the past two months consolidating its gains in the midst of a pattern of converging moving averages. As shown in Figure 1, spot gold’s trading range this past week was entirely below its 50-day moving average ($1,299.77) and its 100-day moving average ($1,292.54), and therefore appeared destined to test support at its 200-day moving average at $1,252.02. To the degree technical traders might be excited by such a classic “check” of support, we have been willing to concede such a trading path might actually prove to be the most efficient and healthy manner to reenergize gold’s ascent since mid-August 2018.

Gold’s Upside About To Be Reenergized 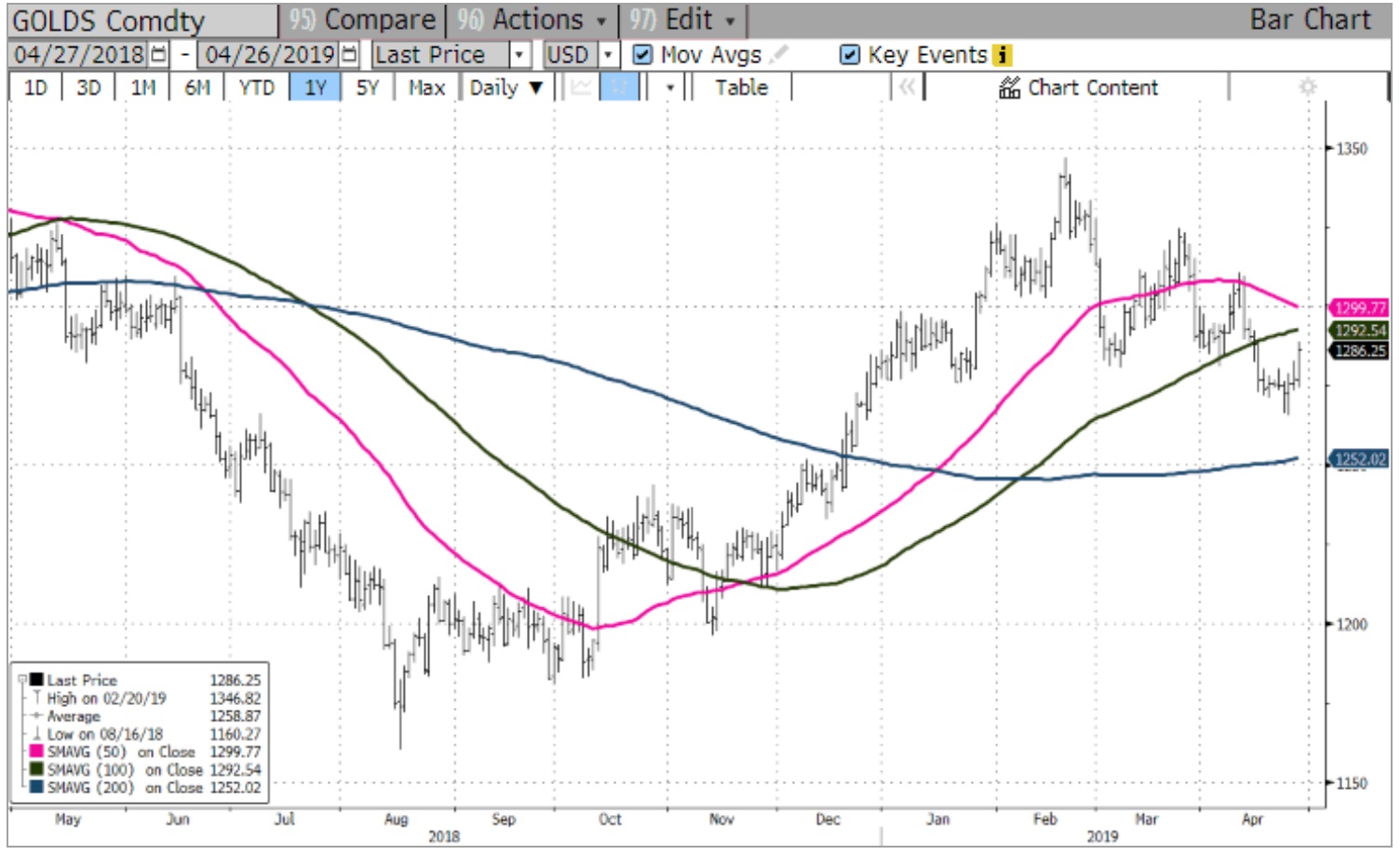 Of course, whenever lots of eyeballs identify a likely price trend in a commodity or currency market, the trading spirits have a way of snatching away the football like Lucy from Charlie Brown. In short, if everyone is looking for a short-term price target, it makes it harder and harder for the price to actually get there! Sure enough, spot gold disappointed those looking for a check of underlying support by closing this past week on a bit of a tear, rising 2.0% from an intra-day low of $1,265.50 on Wednesday (4/24).

Pressure Building to Break Through $1,300
Especially given the approach of April month-end, we would expect the coming week to witness increased COMEX volumes from bearish gold traders seeking to contain gold’s paper price below the $1,300-level. In our view, this goal will be difficult to achieve for three reasons.

First, as shown in Figure 2, the 4/23 Commitment of Traders report disclosed a speculator net long position of 37,395 contracts, the lowest since July 2018, and before that January 2016 (not pictured), both levels from which gold launched multi-month advances (below normal levels of potential long sellers on COMEX). 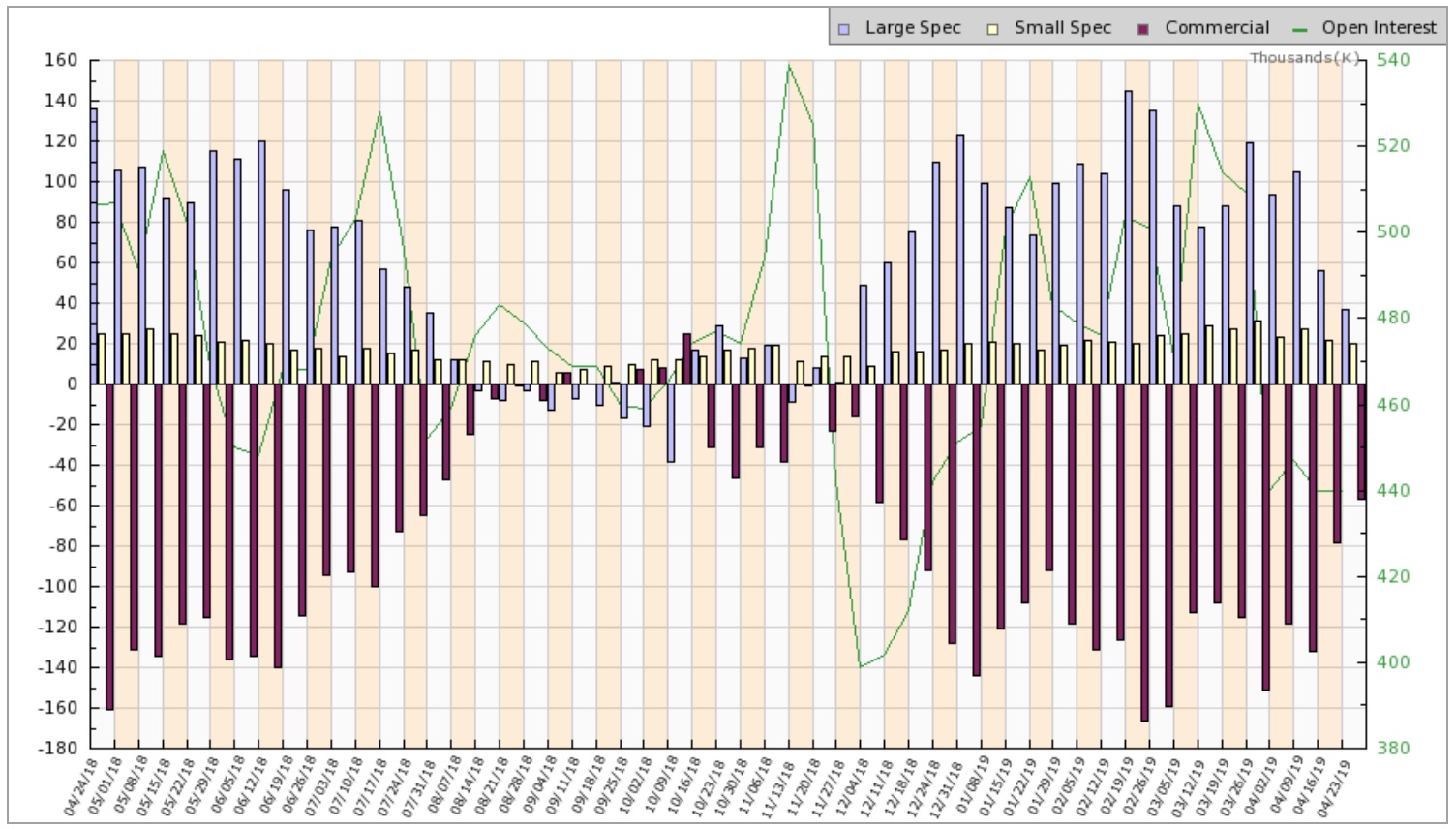 Second, demand from global physical markets remains quite robust. Without question, gold pricing equilibrium during the week of 4/22 was supported by continued strong demand from physical markets. During the week, AM Indian ex-duty premiums averaged $6.62, and, as shown in Figure 2, trading premiums on the Shanghai Gold Exchange expanded to fresh 2019 highs of 1.67% (or an average premium of $17.59).

Third, gold demand from global central banks continues to run at historically high levels. After totalling 651 tonnes in 2018 (highest since 1967), the IMF reported in April that aggregate central bank purchases in January and February 2019 totalled 90 tonnes, 61% higher than the 56 tonnes bought in the first two months of 2018, and the highest rate of growth since the first two months of 2008. Joining January/February purchases by perennial gold accumulators Russia (37.4 tonnes), China (21.8 tonnes) and Kazakhstan (5.8 tonnes) have been some surprising countries including Columbia (6.1 tonnes), Argentina (7.0 tonnes) and India (8.2 tonnes). Citigroup now estimates total 2019 central bank gold purchases will exceed 700 tonnes.

Central Bank Gold Buying Sends Positive Message
The importance of central bank gold purchases has less to do with their direct impact on supply/demand fundamentals for bullion than it does with sending clear signals to global investors of central bank preferences for gold over competing options for their foreign exchanges reserves. In this manner, recent gold purchases are important symbolic reflections of de-dollarization efforts in these countries. Referencing India as a prime example, The Reserve Bank of India’s 2018 purchase of 42.3 tonnes of gold marked the first notable purchase since India’s 2009 purchase of 200 tonnes of IMF gold. Early 2019 purchases are on a rate to exceed this 2018 total.

For the notoriously gold-unfriendly Indian government to purchase this much gold is, to us, a clear signal of resentment over unilateral trade restrictions placed on India by the Trump administration (to trade with countries such as Iran). In March, President Trump informed Congress of his 60-day “notice to terminate” India’s granted exception to U.S. sanctions on Iranian oil imports. We would expect the trend of central bank gold accumulation only to accelerate in future periods.

***Also just released: Psychology Is Even More Disconnected Now Than It Was In Late 1999 To 2000 CLICK HERE TO READ.