Today Michael Oliver, the man who is well known for his deadly accurate forecasts on stocks, bonds, and major markets, sent King World News the following information about a very big development in the gold market.

June 23 (King World News) – Michael Oliver at MSA Research:  Over the past six years the broad swings up or down in the Dollar have not been a viable inverse trend indicator for gold. While gold doubled from its 2015 bear low, the Dollar entered a very narrow 12 to 13% range of price action since 2015, perhaps its narrowest multi-year range of action in history. And now it’s tightly clustered near the bottom end of the action since 2015, groping to hold that floor (the black horizontal is a pivotal price line tracing back to prior peaks in 2009 and 2010). So that black line is now important as a last negative point of breakage for the Dollar, given that its annual momentum trend turned negative in early 2017 when price dropped through 99. 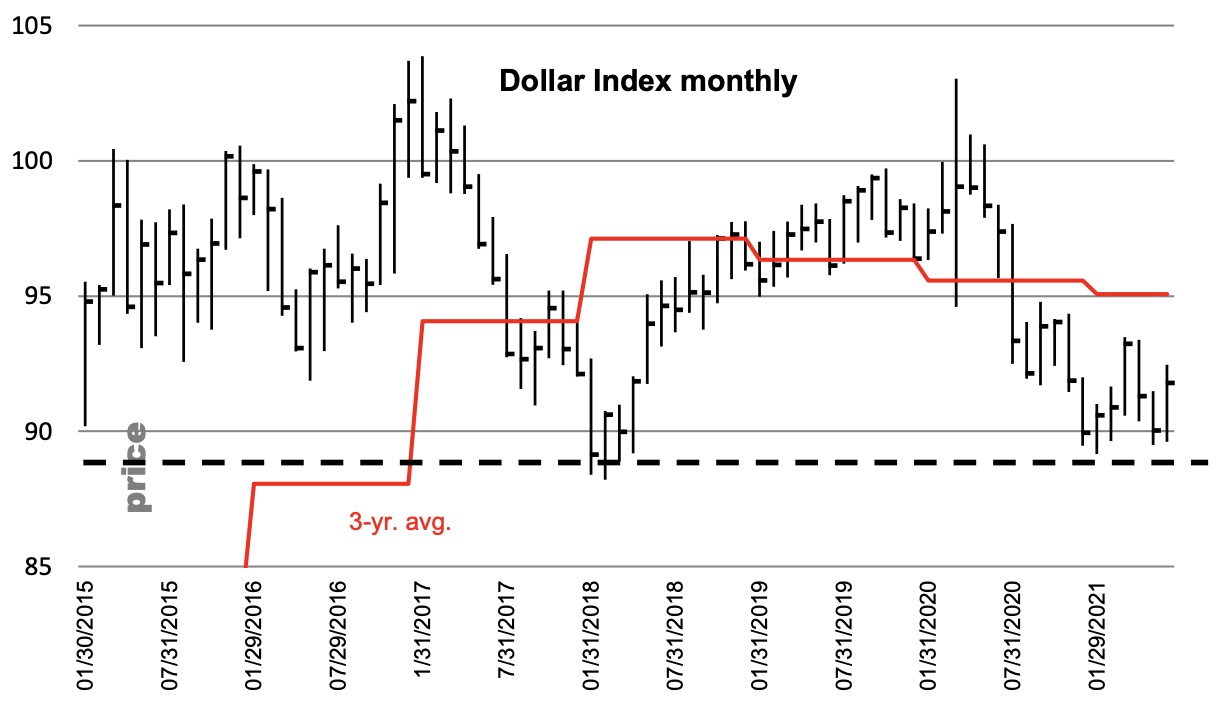 Meanwhile, gold obviously did not need a major Dollar decline to create its major advance. Watching the Dollar for clues about gold was basically futile. 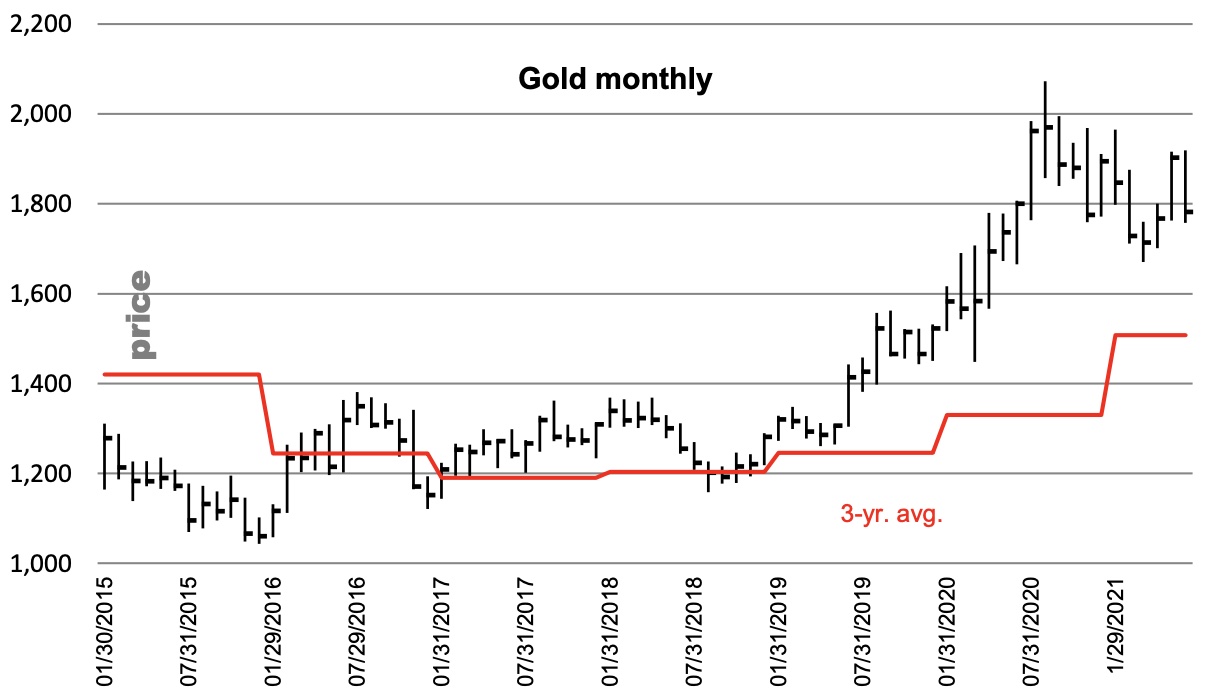 But there has recently been a growing tightness in their swings, especially evident when we view weekly and daily action on the following charts.

Weekly action has grown more and more tightly inverse over the past several months. As gold’s weekly price and momentum were making a bottom and an upturn in March, the Dollar Index was doing the opposite. Weekly momentum of the Dollar then registered overbought readings (the lower SD band was over the zero line), and gold’s weekly momentum registered oversold. Both are noted with the first circles. 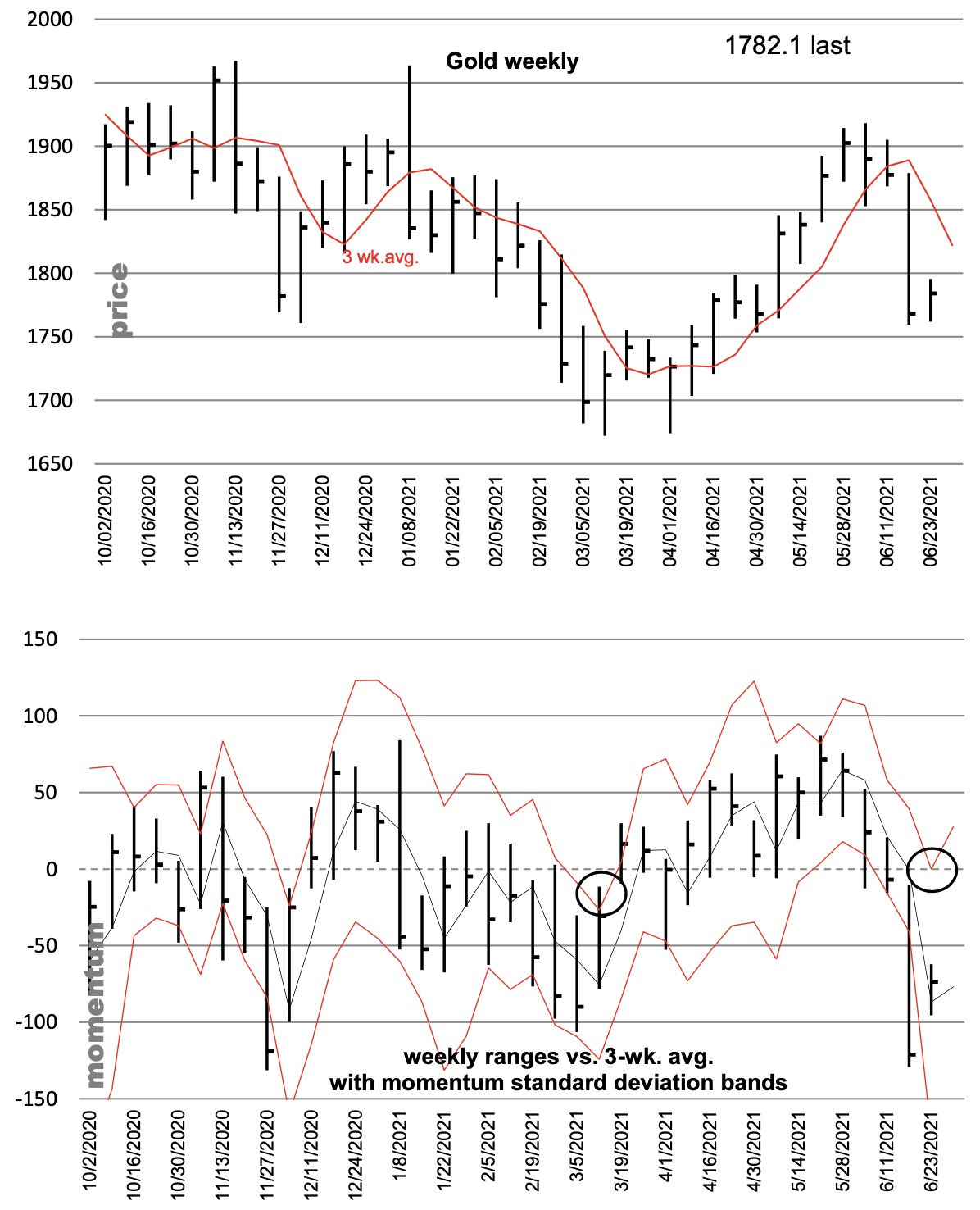 Now in the recent and aged weekly momentum moves—down in gold, up in the Dollar—both have produced new oversold (gold) and overbought (Dollar) readings, which were followed this week with efforts in the new direction. It will likely take another week or so to fully exhibit a turn, but both are behaving opposite. 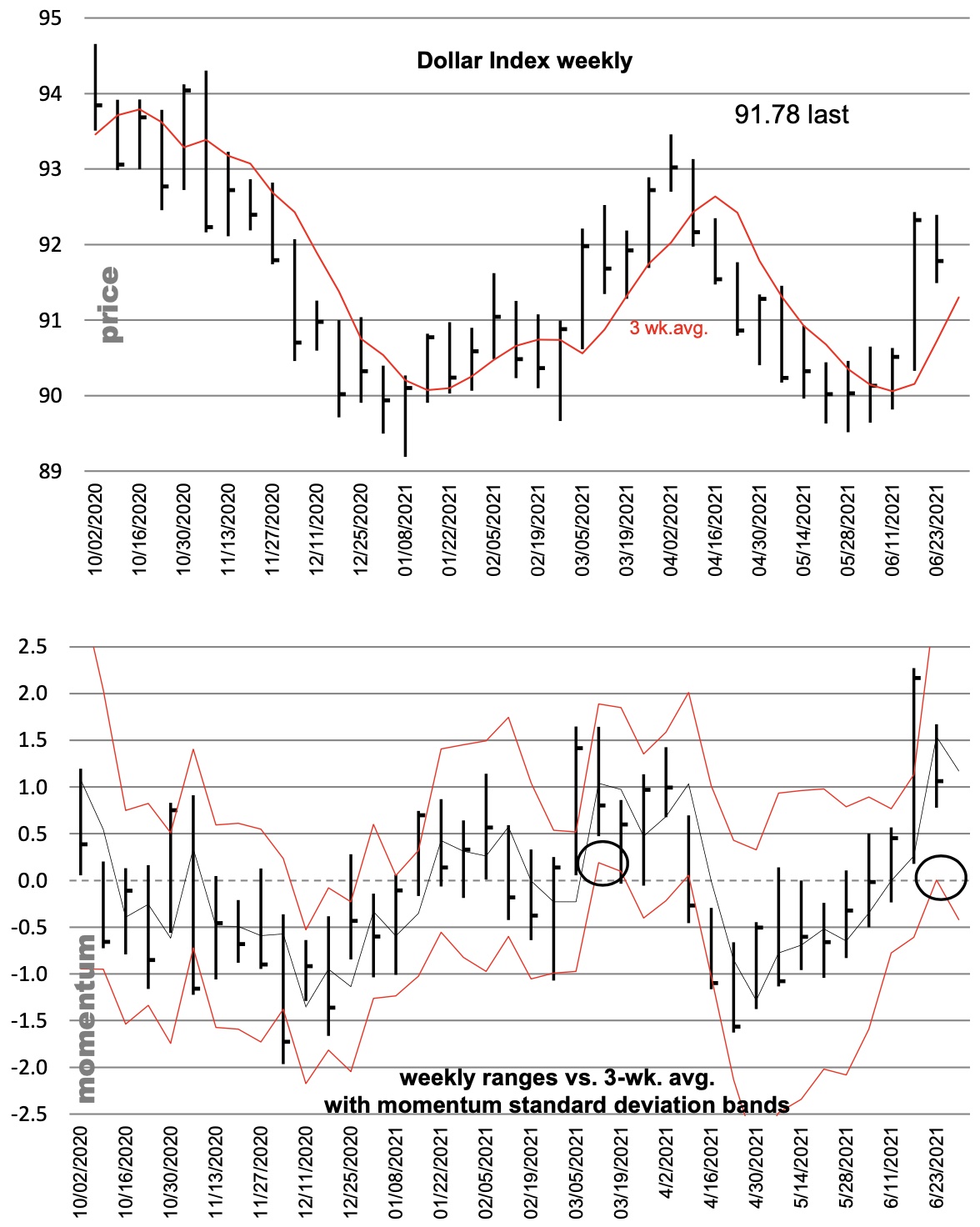 And as we’ve said in some recent reports on the Dollar, if it trades back down now to 90 (we’ve adjusted this price-based trigger up from 89), then we expect the price floor noted on page one to come out for the Dollar and for there to be a whoosh effect on the downside. And if that occurs, don’t be surprised— in fact expect—gold to be back up challenging the price level that we think will generate dramatic upside and tonal change: $1950…

Gold
In the Weekend report we said that an upturn in daily momentum (following the newsy drop last week) “should only be seen as a first step in applying the brakes.” That breakout was achieved today but with some attributes (unique to our analysis) that suggest treating it as the beginning of the turning process, not some electric bolt on the upside.

The rally to get gold’s daily momentum over the downtrend lines took five days (low momentum day to today, inclusive). That’s aged for this upswing. It might last another day, but we’re not sure about that. The main point is that the integrity of the prior daily momentum downtrend has been broken.

Upside momentum action (much of that due to the rapidly falling 3-day avg.) left an oscillator gap below two days ago, which is rare (circled). 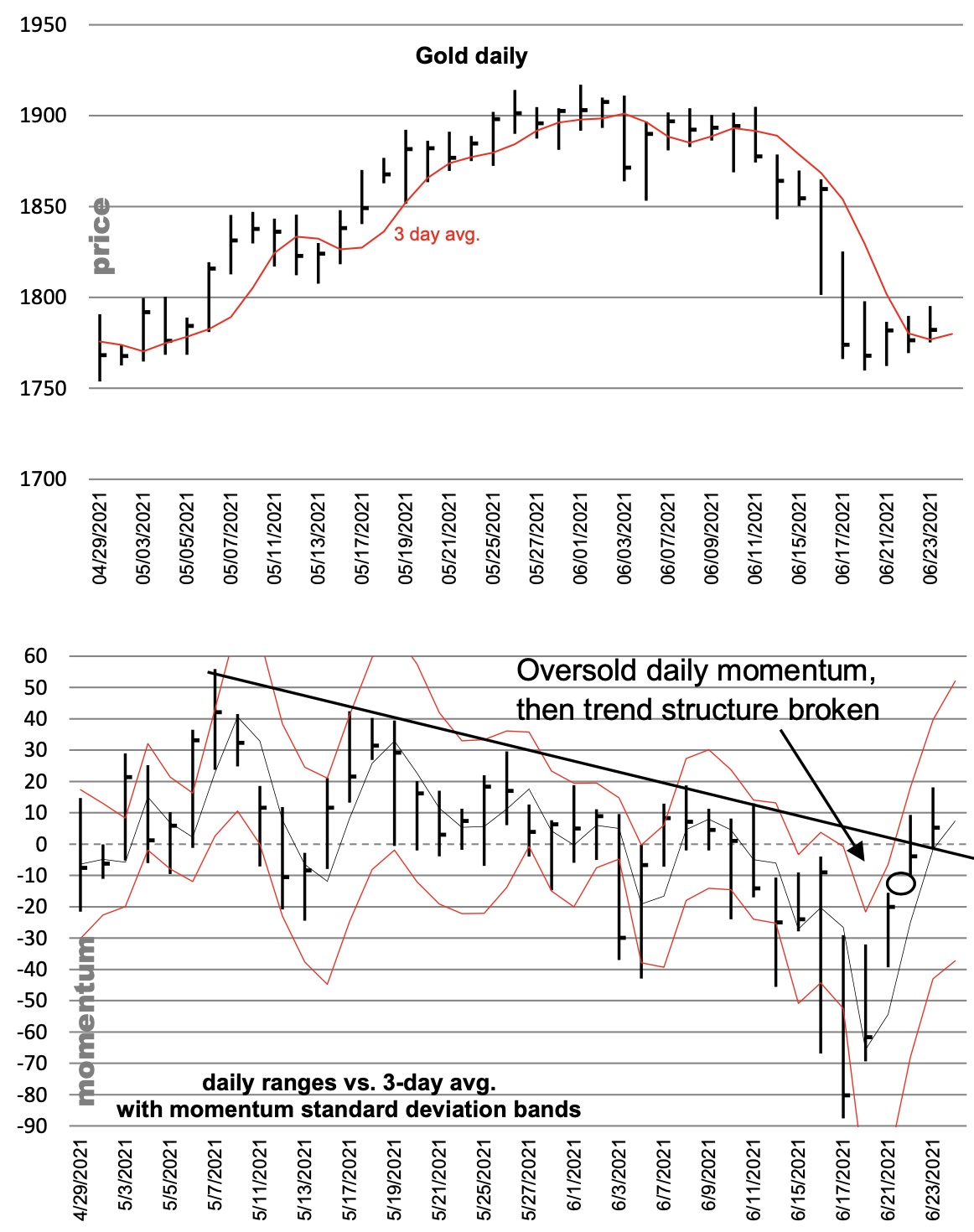 At some point soon, we bet gold will drop back down to at least $16 below its 3-day avg./zero line to fill that gap. (It’s a technical curiosity of our 3-unit momentum charts, whether daily, weekly, monthly, or quarterly, that momentum gaps are rarely left unfilled.) Tomorrow such a gap-filling exercise would need to see gold at $1763, but as the 3-day avg. rises, as it is now doing, then that task can be accomplished at higher price levels. Also, even if gold were to produce a lower low in price than seen so far, it would grossly non-confirm via momentum and highly likely be a bear trap. In sum, the recent action tells us that a process of bottoming is credibly underway. We hope those seemingly bean-counting micro-technical observations were imparted intelligibly.

The Dollar Index has been in a daily momentum uptrend since early May, precisely inverse to gold. Action yesterday and today broke the integrity of that uptrend and thus tells us the trend is topping. However, the Dollar Index also left a small momentum gap (circled) between yesterday’s high reading and Monday’s low reading. 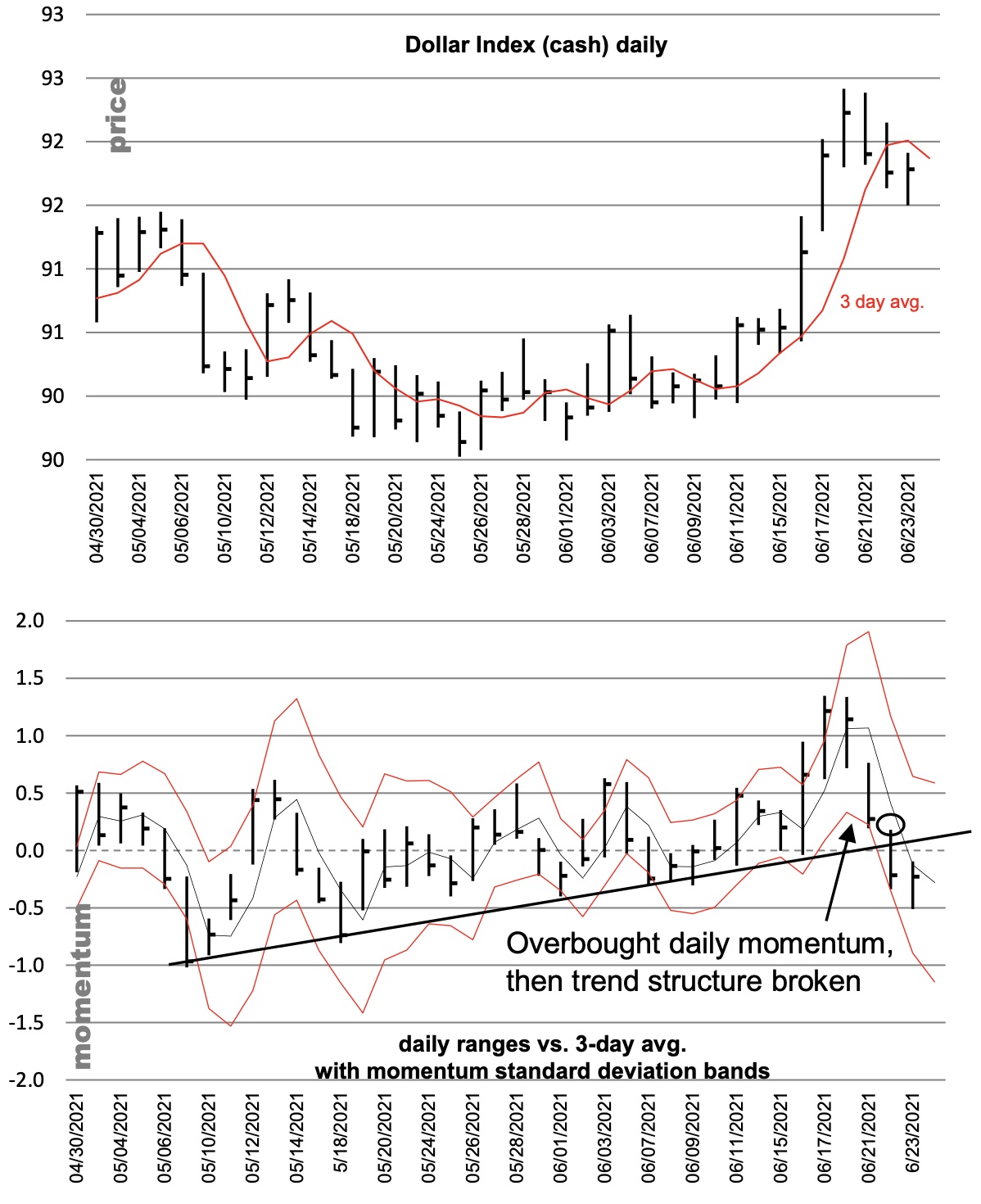 To fill it wouldn’t require much, but it’s to be expected. Meaning a reach- back by the action that tries to reassert the prior upside but is highly likely to be futile noise. In other words, short-term Dollar action is saying precisely the opposite of what gold is saying. The backbone of the action since early May is breaking…To subscribe to Michael Oliver’s remarkable MSA annual research, which is 35-50 reports each month on gold, silver, mining stocks, currencies, commodities and debt, at the KWN special discounted rate click here.