On the heels of the attacks on Saudi Arabian oil facilities creating turmoil in world markets, today one of the greats warned global financial chaos is coming and you better own gold.

KWN will be publishing extra articles today due to the violent nature of the trading in global markets after the attack on Saudi Arabia.

Global Financial Chaos Is Coming
By Trey Reik, Senior Portfolio Manager, Sprott USA
September 16 (King World News) – The most troubling legacy of contemporary central banking has been the emergence of negative nominal interest rates. At the risk of self-impeachment, we at Sprott wish to state unequivocally that at least in the real world, negative interest rates are an absurd construct. The fact that they actually exist, especially to today’s sovereign tune of some $15.6 trillion, only highlights the dire nature of global financial imbalances.

An Unabridged History of Negative Interest Rates
If negative interest rates represent the financial-market anathema we perceive, how did the global total of negative-yielding bonds ever get to this point? After all, 5,000 years of financial history never witnessed negative nominal interest rates (Figure 1) until the wake of the Global Financial Crisis (GFC).

Dating back to Mesopotamia in 3000BC and the Babylonian Code of Hammurabi in 1772 BC, customary annual interest rates approximated 20%. After three centuries of Roman stability lowered borrowing costs to the 4% level through 300AD, interest rates oscillated in the high single digits until the early 18th century. The world’s first brushes with the zero bound occurred during the Great Depression and World War II, but even during these black swan events the Fed never felt compelled to employ negative policy rates. 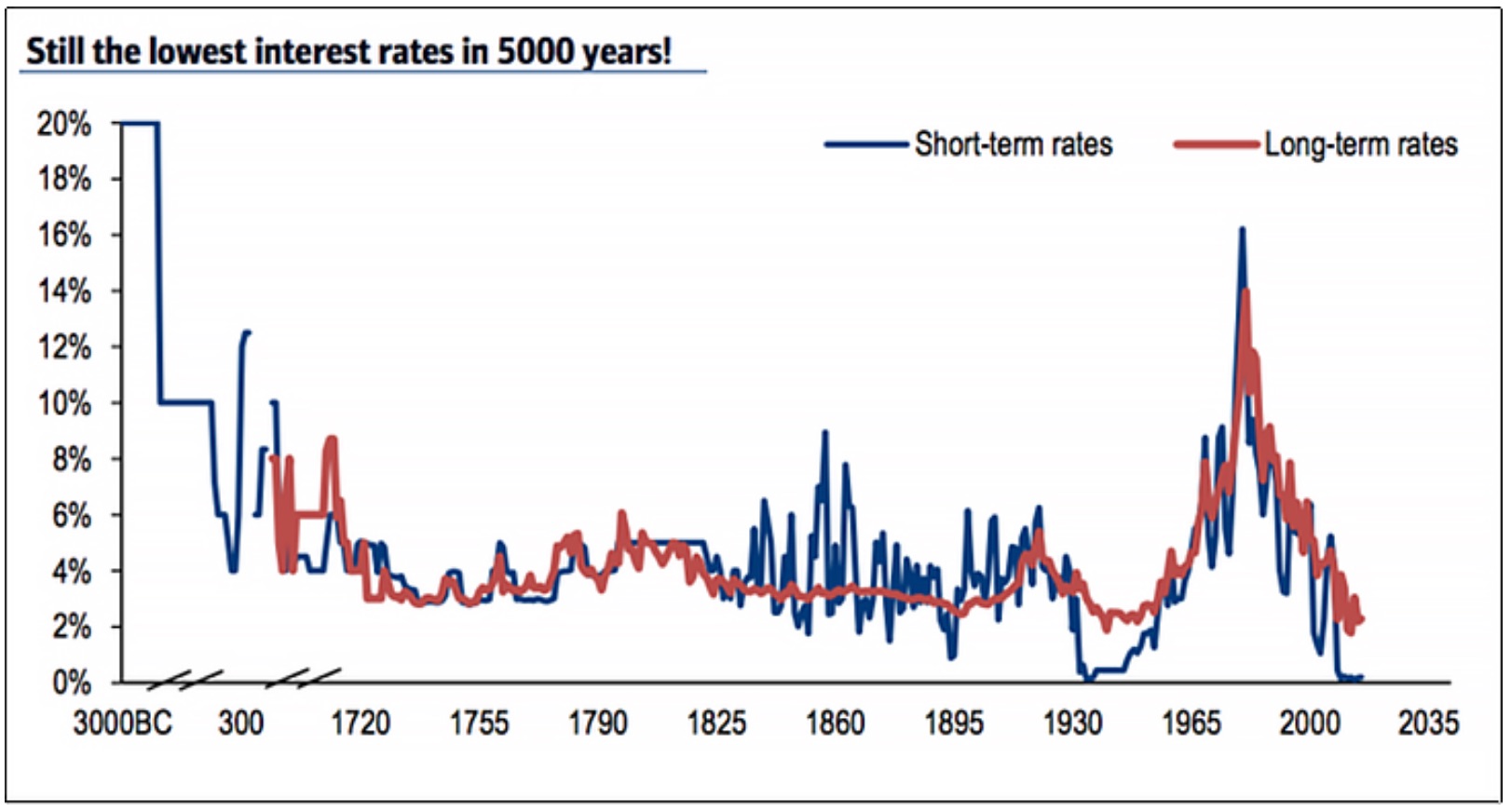 Source: Bank of England; Global Financial Data; Homer & Sylla “A History of Interest Rates.” Note: The intervals on the x-axis change through time up to 1700. From 1700 onwards they are annual intervals.

Post GFC: Emergency Central Bank Experimentation
In the wake of the GFC, however, global central bankers chose to deploy all sorts of unprecedented monetary policies to forestall debt deflation and default. Specifically, in response to the severe GFC aftershocks known as the European debt crisis, a few European central banks experimented with negative policy rates as a pointed currency lever. During 2012, Denmark employed negative interest rates to deter capital inflows and support the Danish krone’s peg to the euro. Then, in 2015, the Swiss National Bank took similar action to mute relentless strength in the Swiss franc.

More generally, the European Central Bank (ECB) and the Bank of Japan (BOJ) adopted negative deposit rates for commercial bank reserves in a broad effort to forestall deflation, prompt lending and spark economic growth. In essence, the ECB and BOJ aimed to encourage commercial banks to accelerate their lending by charging them for deposits held at the central banks. From that point forward, especially in Europe and Japan, the negative-interest-rate cat was officially out of the bag. 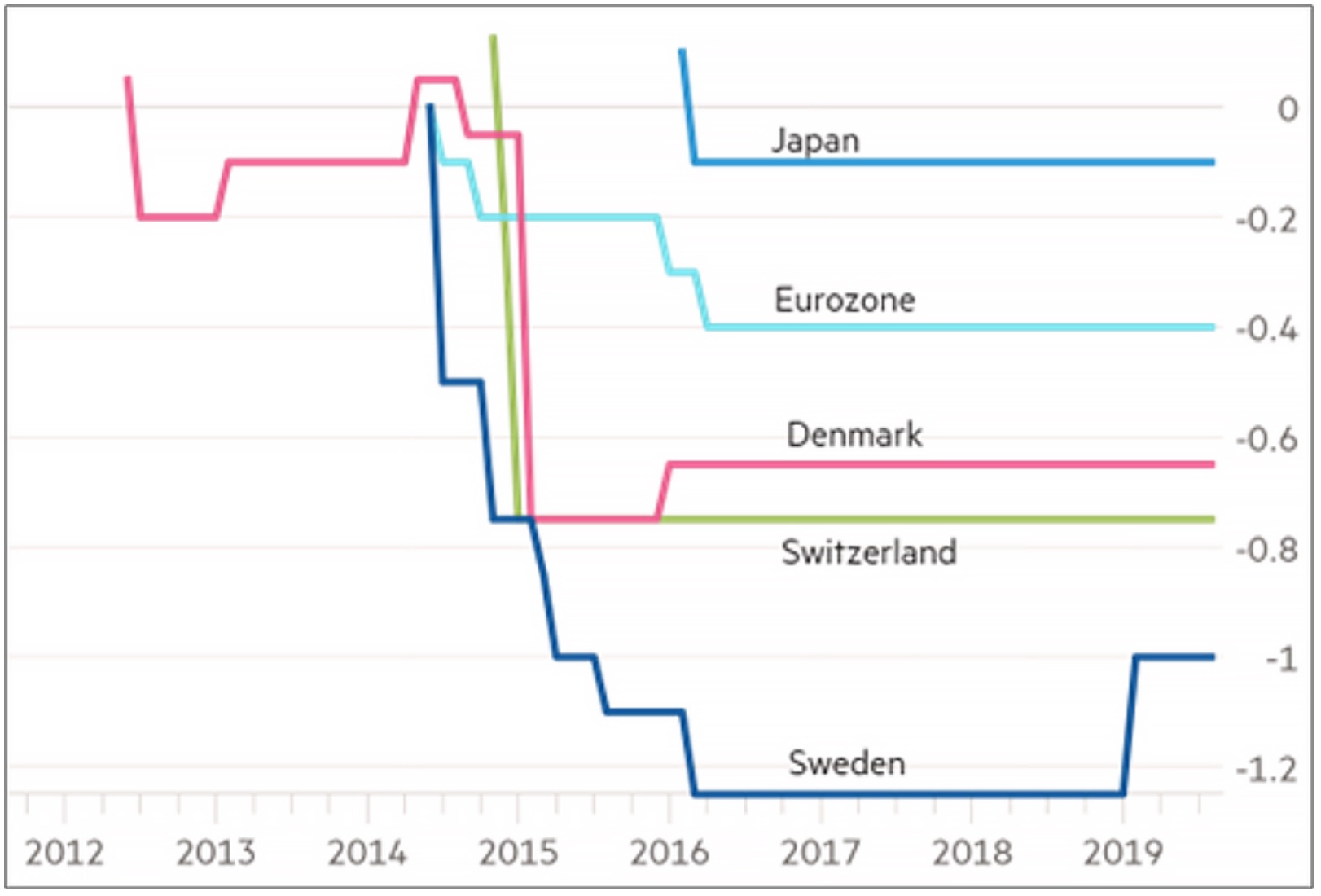 Of course, the downside of emergency central-bank experimentation is the time-tested truism that once unconventional measures are deployed, they can never be scaled back (without destabilizing impacts). Thus, the financial world is now left with the flat-line trend evident in the colorful depiction of central bank policy rates to the right of Figure 2.

In short, having entered the realm of negative policy rates, it will be extremely difficult for these central banks to return to positive rate structures until painful rationalization of global debt burdens is allowed to run its course. We have written ad nauseam that with global debt now measuring $246 trillion, or 320% of global GDP (Institute for International Finance Q1 2019 Global Debt Monitor 7/15/19), interest rate structures of all types can only decline (further) in future periods…

The Magic of Central Banks
Our point here is that promiscuous central bankers are entirely to blame for unleashing the contemporary capital-market mutation of negative nominal rates. Without revisiting gory details of the post-GFC official debate over negative rates, we would best summarize central-banker hubris during this unprecedented period in the inimitable words of Vitas Vasiliauskas (Lithuanian Central Bank Governor and ECB Governing Council Member), who observed on 5/11/16:

“Markets say the ECB is done, their box is empty. But we are magic people. Each time we take something and give to the markets — a rabbit out of the hat.”

Well there you have it: magic people pulling omnipotent monetary policy levers are not bound by the rules of nature, mathematics or finance. Of course, the rest is now history. From the genesis of central bank experimentation (to avoid long-overdue financial cleansing of economic recession) has sprung what Chirag Mirani, UBS Head of U.S. Rates Strategy, has aptly termed “a yield-suck vortex.” In essence, if Eurozone commercial banks are forced to pay the ECB interest on reserve balances, while ECB QE removes 2.6 trillion euros of sovereign and corporate bonds from the marketplace, a race-to-the-bottom process of yield-starved musical chairs is the inevitable outcome. 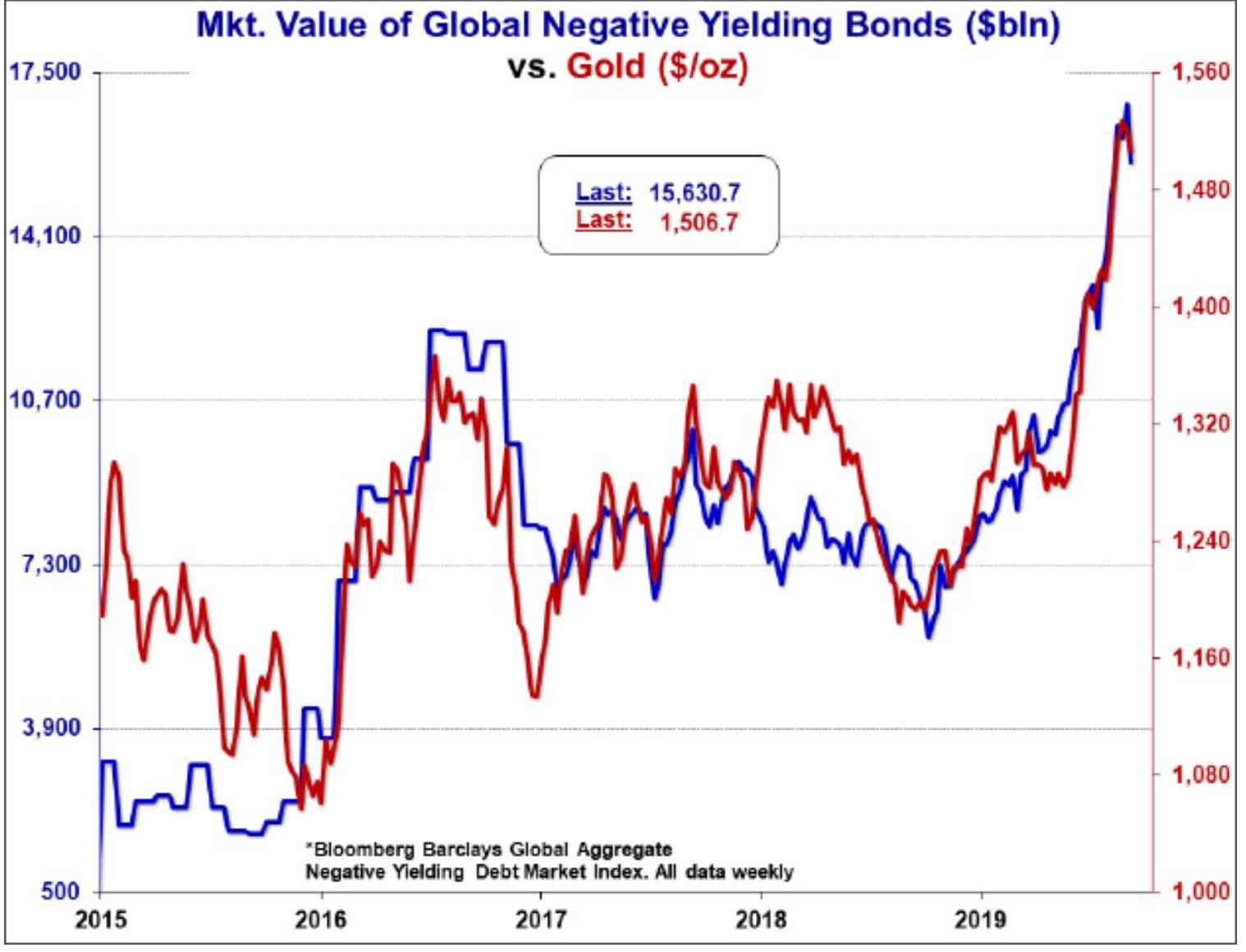 Given the synchronized pivot of global central banks back towards easing posture during 2019, it is not surprising that global IG debt has enjoyed a virtually insatiable bid in recent quarters. We update in Figure 3, a graphic we have frequently referenced, the global total of negative-yielding sovereign bonds, which now stands at some $15.6 trillion (9/5/19).

Gold’s Summer Rally
Without question, gold’s summer rally has been closely tied to the global explosion in negative-yielding bonds. Moving forward, however, we expect gold’s prospects to be less correlated to absolute changes in the sum total of negative-yielding paper (the only rational total is zero) than to growing investor concern over the corrosive impacts of negative rates on the global financial system. 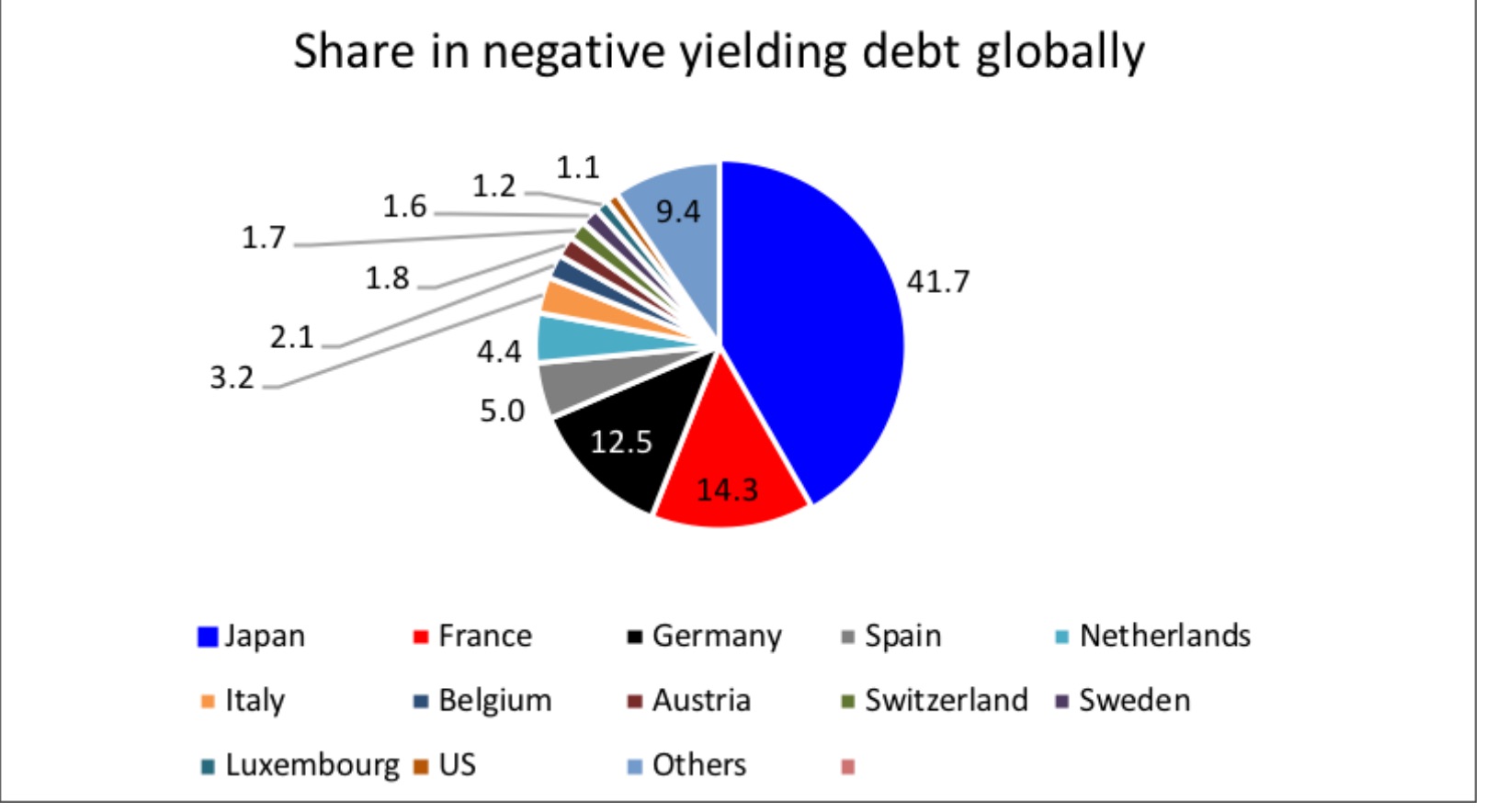 True to form, American investors remain largely unconcerned about the global surge in negative-yielding debt instruments. After all, as shown in Figure 4, negative interest rates are a phenomenon so far relegated largely to Japan and the Eurozone. Given the frenzied search for yield once again dominating global capital markets, however, reasonable queries are whether and when negative yields might reach the United States?

Well, as the global total of negative-yielding sovereign bonds has tripled from October 2018 lows, it is interesting to note that U.S. Treasury yields have collapsed in tight unison. The 10-year Treasury yield has fallen 55% from 3.234% on 10/5/18 to 1.458% on 9/3/19, while the 30-year yield has fallen 43% during the same span, to an all-time low of 1.953%. As virtually every segment of the U.S. yield curve has inverted in recent months (for the first time since the GFC), overwhelming investor response has been to dismiss current inversions as less indicative of imminent U.S. recession than of dwindling positive-yielding alternatives.

Our emphatic response to this reasoning is, “Perhaps, but so what?” In our minds, global conditions isolating Treasuries as the world’s last resort for positive IG sovereign yield are far more foreboding for financial-asset valuations than rising probabilities for U.S. recession. In a mid-August report (Figure 5), BofA Merrill Lynch estimated that U.S. investment grade yields now comprise a patently absurd 94% of the net global total of positive investment grade yield (including both sovereign and corporate paper). Global debt levels are suffocating global capital markets. Relevant implications are far more critical to current portfolio allocation than potential falloff in U.S. GDP. 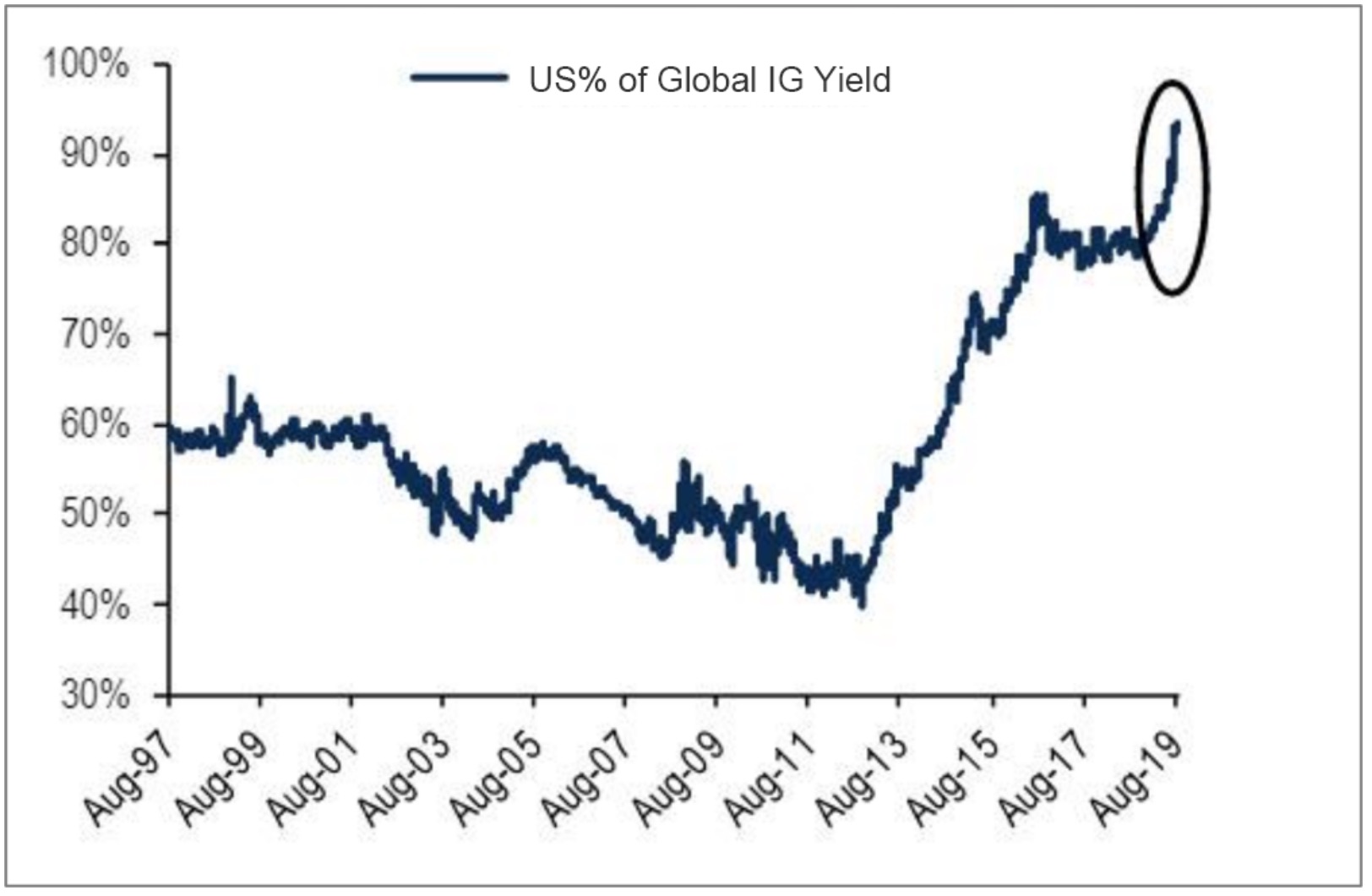 Negative Rates in the U.S.?
It is one thing for us to suggest that domestic debt burdens will exert downward pressure on Treasury yields every bit as relentless as that which has driven so many sovereign yields into negative territory. It is quite another for legendary monetary stewards and high pedigree bond managers to agree with our reasoning. Along these lines we encourage readers to pay close attention in coming months to the public debate over the likelihood of negative interest rates “arriving” in the U.S. Our observations in recent weeks have been a touch startling in this regard. On 8/13/19, Former Fed Chair Alan Greenspan raised eyebrows in stating:

“There is international arbitrage going on in the bond market that is helping drive long-term Treasury yields lower. There is no barrier for U.S. Treasury yields going below zero. Zero has no meaning, besides being a certain level.”

“It is no longer absurd to think that the nominal yield on U.S. Treasury securities could go negative….If the Fed cuts rates all the way back down to zero and restarts quantitative easing, negative yields on U.S. Treasuries could swiftly change from theory to reality.”

Truth be told, we do not believe the Fed will ever deploy negative policy rates in the U.S., and we would expect any incursion into negative-yielding territory by Treasury securities (of any duration) to be short lived, as during late 2008 when Treasury bill yields briefly turned negative…

Given the overwhelming global dominance of U.S. capital markets, combined with the U.S. dollar’s ongoing prevalence as the world’s reserve currency, we do not believe the global financial system could withstand negative U.S. rate structures for even a brief period. Additionally, negative U.S. rates would wreak unacceptable havoc on systemic financial platforms such as domestic pension funds, insurance companies and money markets.

It is one thing for Denmark’s third largest bank (Jyske Bank) to curry favor with growth-seeking ECB regulators by launching this past August the world’s first-ever negative-interest-rate 10-year mortgage (-0.5% annual interest rate—yes, Jyske is paying its customers interest to take mortgages), but negative-interest-rate mortgages are an innovation unlikely to gain much traction in the $10 trillion U.S. mortgage market. 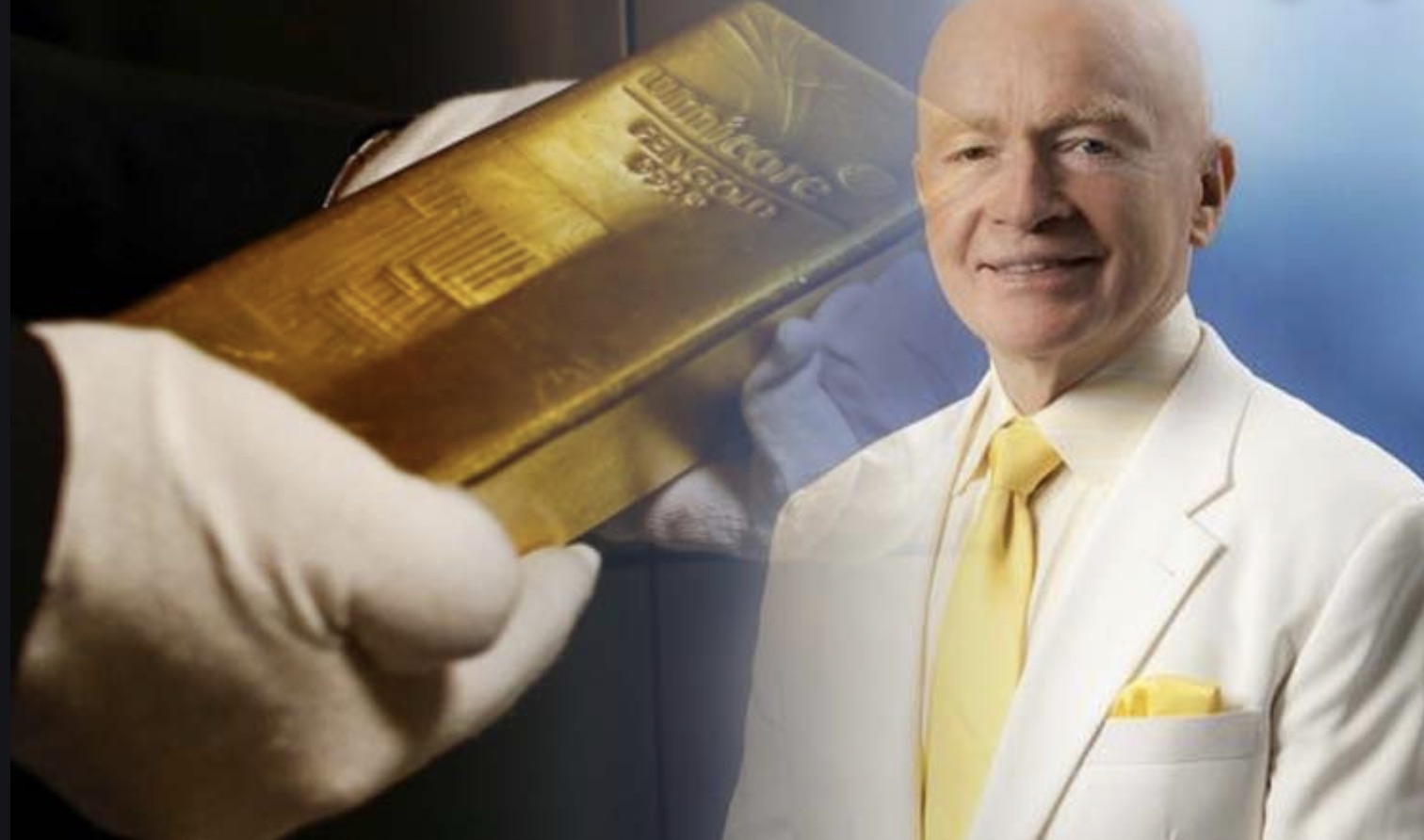 The Best Time to Allocate to Gold?
With respect to timing individual portfolio allocations to gold, we tip our hat to legendary emerging market generalist Mark Mobius, who remarked in a 8/20/19 Bloomberg interview:

“Buy gold at any price. I’m talking about physical gold. If the idea goes mainstream and all investors go to a 10% gold allocation, the price will skyrocket. Investors need to move quickly to get ahead of the crowd.”

As We Kickoff Trading After Saudi’s Attacked And Crude Oil Is Soaring, Here Is What You Need To Know CLICK HERE TO READ

Oil Spikes $7 And Gold Surges Back Above $1,500 After Drone Attacks On Saudi Oil Facilities CLICK HERE TO READ 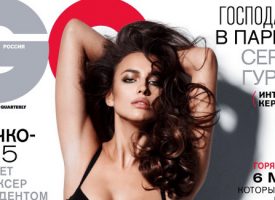